As the year 2002 approached and with it our 20th anniversary, Joanna and I both thought it appropriate to return to Europe much as we had done to celebrate our 10th in 1992.  I had been contemplating for some time to put together the type of adventure you might see advertised in a brochure or at the Sierra Club web site.  This would be a one-week venture and would combine hiking, beautiful scenery, historical settings, good food and as you, our dear readers have come to expect, no lack of drinking and carousing.  I could think of only one location that would offer all of these elements and that would be an inn-to-inn hike along the King Ludwig’s Way in Germany, which we had hiked in 1984.

In the summer of 1999, some months after my Starkbier trip, most of my side of the family gathered at a campground just outside of Mesa Verde National Park to celebrate the milestone birthday’s (we won’t say which decade they were celebrating) of Joanna, my sister Beverly, and our cousin Steve Merker.  Joining us were all of the living Mann family aunts and uncles, with the exception of one, my Dad, brother Chuck, cousin Lindy and her husband Greg, and a number of good friends including Doug and Kathy Hoggatt and Ric and Irene Johnson.  The beauty of the facility was that along with tent camping they had a couple of older single wide mobile homes and a number of camping cabins, so that each person could find their own relative level of comfort.

We’d taken our bikes and got one ride in the week all were together but mostly took a number of longish hikes with Ric and Irene, who were training for an assault on Mt. Whitney in the Sierra Nevada mountains of California, the highest peak in the contiguous United States.  We would stay another week after the family left, touring the surrounding area and getting in a couple of nice bike rides, driving up to Telluride, eating a meal or two in Durango and enjoying craft beer at Main Street Brewing (Mesa Cerveza) a in nearby Cortez.

With plans developing for Ludwig’s Way Ric and Irene immediately came to mind, as we’d traveled with them a number of times and I figured they would be game for the hiking portion of the trip.  And best of all I knew that Ric liked beer.  They agreed to join us with the proviso that we make a side trip to Nuremburg to visit the German side of Irene’s family, she being the daughter of an American service man who’d married a local woman while stationed there.

We timed our flights to Munich so that we would all arrive on the September 16th at approximately the same time.  Gathering up our luggage we took Munich’s efficient S-Bahn (Stadtschnellbahn) from the airport to the Hotel Monaco, near the Hauptbahnhof, the main train station for the city.  As we’d arrived in the morning, too early to check in, the hotel stored our bags for us while we went off to tour historic Munich.

Those familiar with this blog will recall our numerous visits to Munich so I won’t go into our rambles that first day which included all of the attractions of the central pedestrian friendly part of Munich with its many historic sights and opportunities for shopping, eating and drinking.  I recall spending a bit of time in the Frauenkirche (Cathedral of Our Dear Lady), which serves as the cathedral of the Archdiocese of Munich and is the seat of its Archbishop.  Constructed in the late 1400’s, it can accommodate nearly 20,000 people and daily mass is held to this day. 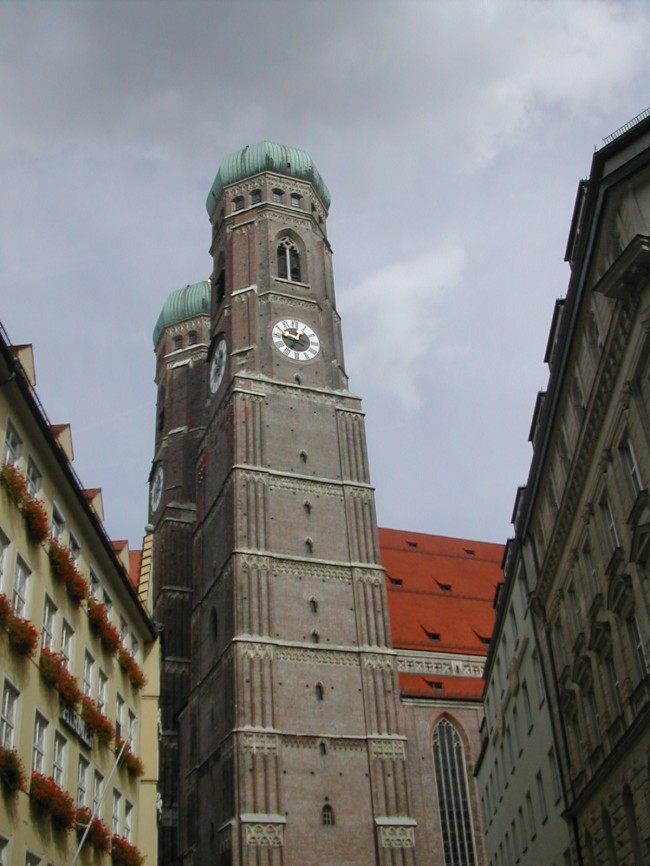 A bit tired, hungry, and thirsty, we decided to give Ric his first taste of German food and beer by heading to the nearby Hofbrauhaus, where we indulged in a liter or so of beer apiece and tried mightily to stay awake, suffering from the effects of a long flight and a bit of jet lag.  Ric, a lifelong drinker of Coors Light was wondering if he would take to the German lagers we’d be consuming and that first taste of Hofbrau Bier let him know that the rest of the trip would be a fine adventure.  We stopped in for dinner that night at Zum Augustiner for hearty portions of German food and retired early in anticipation of our day trip to Nuremburg the next day. 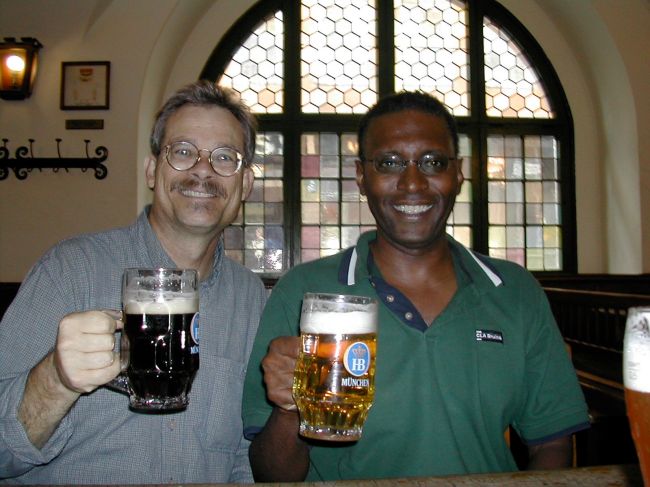 Jerry and Ric at Hofbrauhaus

We picked up the rental car the next morning and took off north for the 100-mile drive up the autobahn.  As would be our practice for most of the trip, and had been our pattern when we would ride with their bike club, Santa Clarita Velo, (Irene and I taking the lead with Joanna and Ric riding along behind us) I drove most of the way while Irene provided the navigation.  We arrived late morning, found the home of Irene’s Aunt and Uncle and were warmly greeted by these wonderful folks, who’d not seen Irene since she was fourteen, this being her first trip back to Europe since that age. 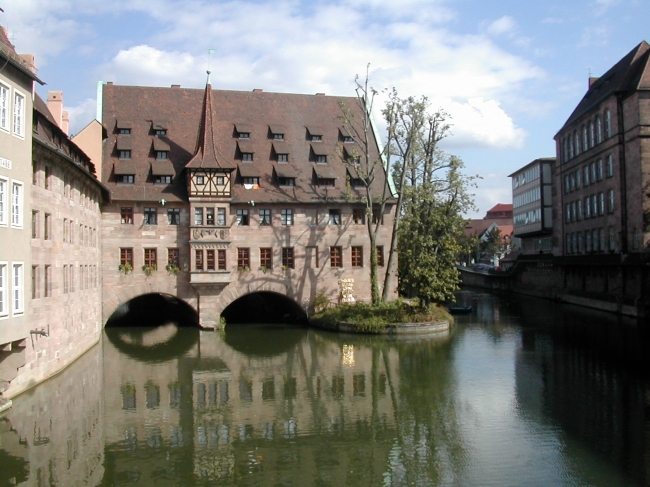 We had a delightful day in Nuremberg, touring the market place, drinking a beer from a local stand, taking in many of the historic sights.  The town is known for being the birthplace of the small, thin bratwurst called the Nürnberger Bratwurst, originating in 1313; a number of vendors were cooking up large quantities on open grills, a common practice in Germany. 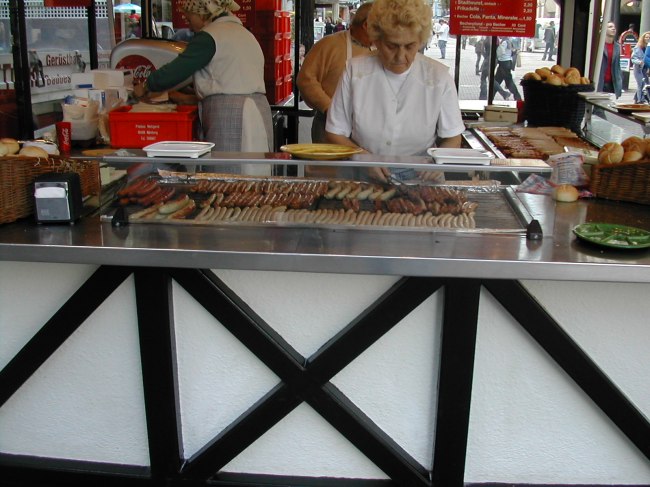 We returned to Irene’s Aunt’s house where she then served us a hearty lunch of the brats with a number of traditional side dishes.  We drank more beer while much reminiscing took place until late afternoon when we piled back into the car for the run back to Munich, needing to get the car back to the rental agency by 6:00pm. 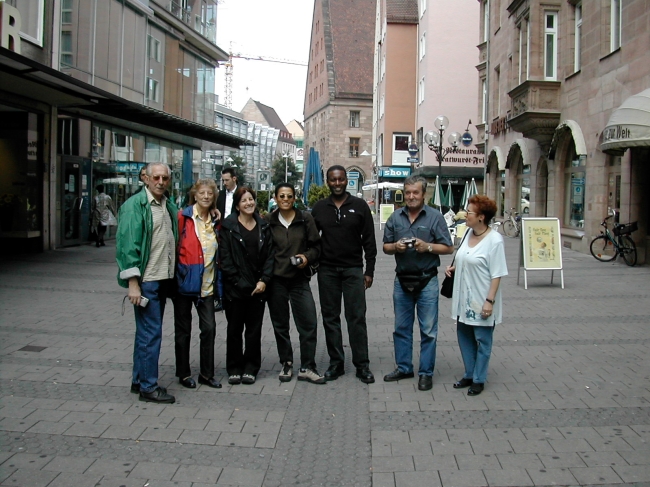 We killed some time at the Monaco resting up before venturing out for dinner.  Hiking some distance down a main east-west artery, the Schwanthalerstrasse we stumbled upon the Augustiner Zur Schwalbe, a charming looking pub and beer garden.  We enjoyed a very good meal there and seeing as it still operates to this day, I look forward to visiting again this fall.

Back in our rooms we packed up our gear as we were going to store a few bags at the Left Luggage station at the Hauptbahnhof, enabling us to hike the Ludwig’s Way with daypacks containing the clothing and personal effects (about 25 pounds per person) we’d need for our week on the trail.  After a long day of driving, visiting, and eating, we were all ready for an early night in, particularly in anticipation of the days ahead, hiking to Fussen on the Ludwig’s Way.

As the ostensible leader of the trip, I was a little nervous about the hike, given that we’d only made hotel or inn reservations for the first night on the trail and the last nights in Fussen.  The days in between would involve a bit of risk and I was hoping that all would work out.  Given our crew, I was confident we could handle whatever fate would throw at us, and on a least one day of the hike, this would prove to be true.