The Steve’s guide recommends taking one of the Madrid tours sponsored by the TI in town, so our destination on July 4th was Plaza Mayor and the office there.  As mentioned earlier, the second day into town is easier as you become more and more familiar with the routine of the commute.  We arrived at the TI, booked our tour, two hours long for the incredibly reasonable sum of 8 Euros apiece.

We had just enough time to grab a bite to eat and walked a short distance over to an outlet of the Spanish sandwich chain, Pans and Company (a variant of a Subway) to use a coupon we’d been handed the day before.  The place was packed, as the Red Cross was holding a big event over in Plaza Mayor (tents were set up everywhere and the participants were all wearing commemorative t-shirts).  The coupon was for two large sandwiches and two cokes, for something like 8 Euros, a deal in any currency.

While I was a bit concerned that we’d be able to eat in time to make the tour given the length of the line, it moved quickly and we soon sat down to our food.  I’d ordered the Napoli, which from the signboard appeared to be akin to a chicken parmigiana.  When it arrived, it was anything but and yet quite good.  Equivalent in size to a foot long Subway, it had two grilled chicken patties, some kind of special sauce, melted cheese and thin stripes of a mild pepper.  Tasty and good enough that we would order it again in Barcelona.

Back at the TI we met with our group and tour guide for the day, Lydia Garrido Gonzalez.  She would lead us on a brisk and comprehensive walk of the central part of Madrid, starting with the Plaza Mayor.  She described the history of the Plaza, once Madrid’s central place for many years and we then moved on to Mercado de San Miguel next door.

This historic iron-and-glass structure from 1916 stands on the site of an earlier marketplace and is now filled with over thirty individual market stalls offering much in the way of food and drink.  While there Lydia gave us some background on Spanish dining and tips on ordering.  It was all so inviting that Joanna and I agreed we would return a day or so later to make a meal there.

We then walked down the backside of the Plaza Mayor on Cava de San Miguel, filled with cave like bars the are actually the underground vaults of the Plaza above it, which is built on a slope.  Next up were the Church and Convent of Corpus Christi, built in the early 1600’s.

A half block up the hill from the church, the convent sells baked goods made by the sisters.  The hours are limited and you must look for a sign that states “Venta de Dulces” (Sweets for Sale) to be sure they are open.  If so, you push the buzzer, wait for the sister to respond, you say “dulces” and are let in the door.  You approach a lazy Susan (torno) that lets the sisters sell their goods without being seen, scan a menu, make your selection, announce your choice, place your money on the torno and your sweets and change will appear.

From there we stopped at Casa de la Villa, the former city hall of Madrid, left vacant when the city’s administration moved to new quarters in 2007.  Built in the 1600’s, it sits in a small plaza across from what was once a town jail, convenient for arrests, trials, and if necessary, executions, all in a timely fashion.

We then made our way to Plaza Isabel, on the backside of Madrid’s opera house and then all the way down Calle Arenal to Plaza del Sol.  Lydia ended our tour there, handing out discount coupons to a number of recommended restaurants, those specializing in tapas and a local dish, the Cocido Madrileño.  This is a three course meal consisting of broth with vermicelli pasta; chick peas and vegetables, typically cabbage and carrots; and finally, a meat dish of spicy chorizo sausage, boiled beef, chicken, blood sausage (morcilla), chorizo and bone marrow.  Unfortunately, circumstances would dictate that we would miss sampling it. 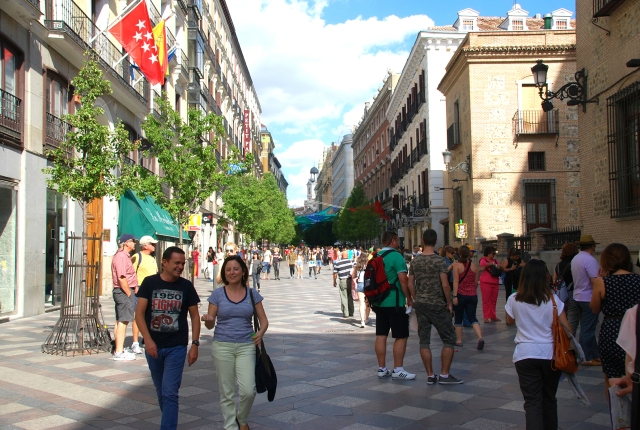 We stopped at a nearby café to grab a beer to re-hydrate and discuss our options.  We decided to head over to the Prado to get there at 6:00 pm for the two hours a day they offer free admission.  We got a bit lost walking there, no surprise for us and the distance was substantial, but we made it with almost a full two-hour allotment.  With a museum of this size and scope, one has to be focused, particularly with just a couple of hours to spend.  We went straight to Bosch’s The Garden of Earthly Delights.

Long a favorite, to see a masterpiece like this in person is both exhilarating and yet a let down.  There is usually a crowd of people around it and so you must jostle for a position.  You can’t really spend any quality time with it, trying to absorb its message; it just becomes an impression – a painting you saw at a museum.

From there we moved on to the wing housing the Spanish masters, in particular the work of Diego Velaquez.  Joanna wanted to see Maids of Honor, his 1656 masterpiece of nannies caring for Princess Margarita.  It depicts a hot summer day that year, with Velazquez standing at his easel; staring out at the people he is painting, the king and queen.  Their reflection is caught in a mirror at the back of the painting.   Margarita watches her parents being painted, joined by her servants and other court attendants.  The painting has a 3-D quality to it, enhanced as you move further away.  It was stunning.

Next up, and our last gallery of the visit as the museum was closing up shop, was Northern Baroque and the work of Peter Paul Rubens.  Viewing his The Three Graces, which features his young second wife, Helene Fourment, his trademarks of bright colors and ample bodies are perfectly captured.

We left the Prado for the long walk back to Principe Pio.  We’d been walking a lot on the trip so far, partly to save money, partly because it is a great way to get to know a town.  The delight of this is that I am walking a great deal, something I was unsure of being able to do given the back and knee issues I’ve experienced the last few years.

A combination of factors seems to have opened the door for this type of activity for me again.  This would be getting out from behind a desk most of the day and being physically active and the new regiment of stretching exercises given to me by Chris Dollar at Carolina Ortho.  By this point in the trip we find ourselves walking up to five miles a day and even discussing the remote possibility of trying to tackle the St. James Way some time in the future.  I could not have imagined this before we left the states.

So in this regard the change has done wonders for me.  I’ve regained some part of my former life; the walking part and it feels good to be mobile in that way.  I can’t say how long it will last so I’m going to enjoy it while I can.  The bus ride back to camp, now like a routine, went by quickly and we did some work on the Internet before turning in.  It had been a long rewarding day.

The Garden of Earthly Delights: http://en.wikipedia.org/wiki/The_Garden_of_Earthly_Delights