With just one more day in Montpellier, we had to make a choice; either ride our bikes or take in the town.  Given the flat terrain and beach environment, we were keen to get a ride in but the winds of fate prevailed, literally, as blustery and intense breezes greeted us Monday morning and after an hour or so of hemming and hawing, we threw in the towel and decided to head into town.  The bonus was that it would give us a chance to see the town that Francois was moving to.

Walking to Our Tent

We walked out of camp to the bus stop and had to wait quite some time, as it comes only once an hour.  The ride to the tram stop was quick enough though and this modern, clean, and efficient transportation system delivered us to the center of town in good time.  We disembarked and made our way across the square to the nearby McDonalds for a quick coffee and to check the Internet.

For the first time on the trip we’d hit a city without a reference in any of our guidebooks.  We stopped in at the TI and picked up a good map with local spots highlighted and used it as a framework to spend a delightful afternoon in this interesting town in Southern France.  We exited out onto Plaza de la Comedie, the central point in town with a quick look at the Comedie Opera House, first opened in 1888.

Place Comedie and the Opera House

From there we walked up Rue de la Monnaie, one of the main shopping streets.  This whole part of Montpellier is the old town, so it is typically charming and we relaxed as we walked.  We stopped in at a bookstore and although not finding any inexpensive English language books, we did pick up a couple of much needed supplies. 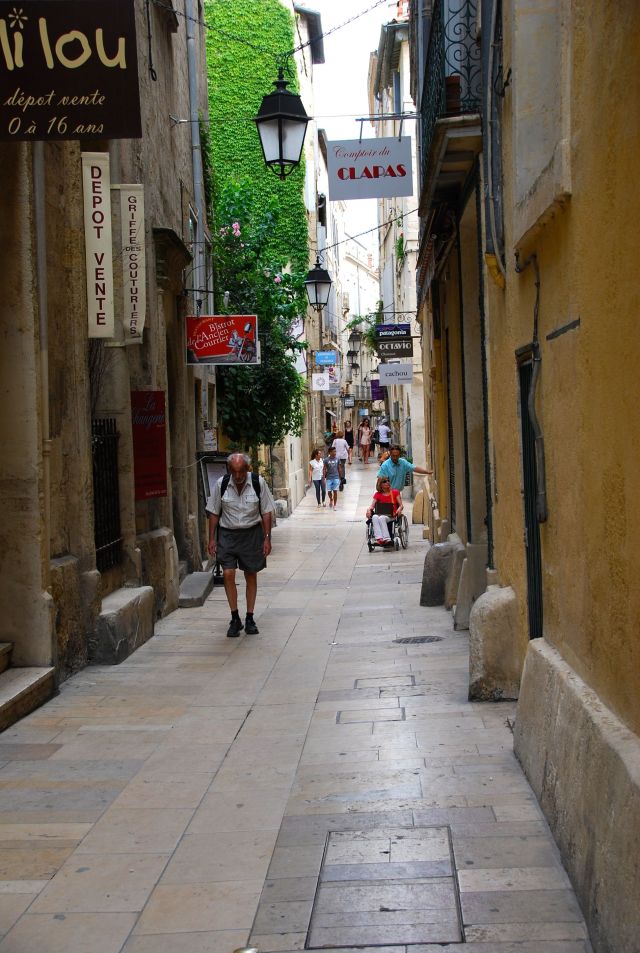 We continued to wander around until we reached the edge of the old city and turned up a hill to go see Montpellier’s version of the Arc de Triomphe and the Peyrou Royal Square with it’s statue of Louis XIV, a 17th century water tower and aqueduct, Les Arceaux.  This is a charming area, the Arc leading to a tree shaded arcade that deposits you at the water tower at the base of the aqueduct overlooking the suburbs of Montpellier in the valley below.

But before we could get to the top of the hill we came upon an accident that had just occurred involving two cars and an automated hydraulic bollard that had activated (it was down when they approached the bus only lane it controlled) and it took out the lower front end of a new Honda station wagon and did a number on the bumper of a mini-van.

A bus had pulled up and stopped and for twenty minutes or more (we are retired you know and it seems like we have plenty of time should we need it) watched a small drama play out, as the bus driver just sat there and a bystander repeatedly tried to lower the bollard.  Using a number of approaches, including jumping on it, pounding on it with a large monkey wrench and jamming said wrench between the side of the device and its casing, all proved unsuccessful in the end.

We finished up our visit to the aqueduct and made our way under the Arc down Rue Foch, then turned right into the old town in search of the Carre Sainte-Anne, an unconsecrated church now serving as a culture center. 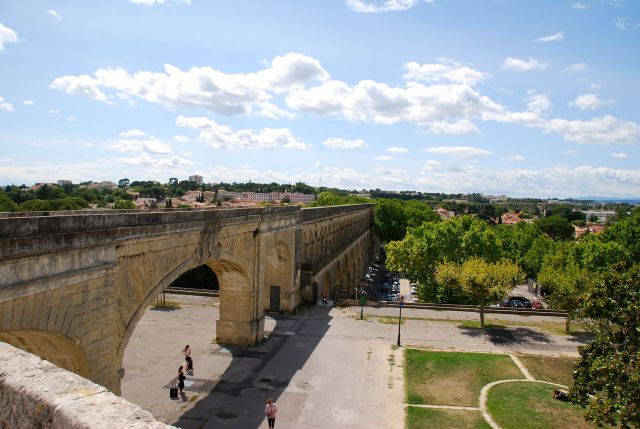 Unfortunately it was closed that day, so we continued down the narrow streets of old town, window shopping and taking in the ambience.

Carre Sainte-Anne at End of Street

We managed in that fashion to use up the rest of the afternoon and with its end of the drawing near, we decided to head back to camp to relax a bit, eat dinner at the restaurant there, and then prepare for our drive to Lyon the next day.  We’d been looking at the distance we’d need to drive to get back to Francois’ by Thursday and felt it would be a really long day, or need two days to cover.  Looking for a city that would be about halfway and provide us with an interesting visit, Lyon was the logical choice. 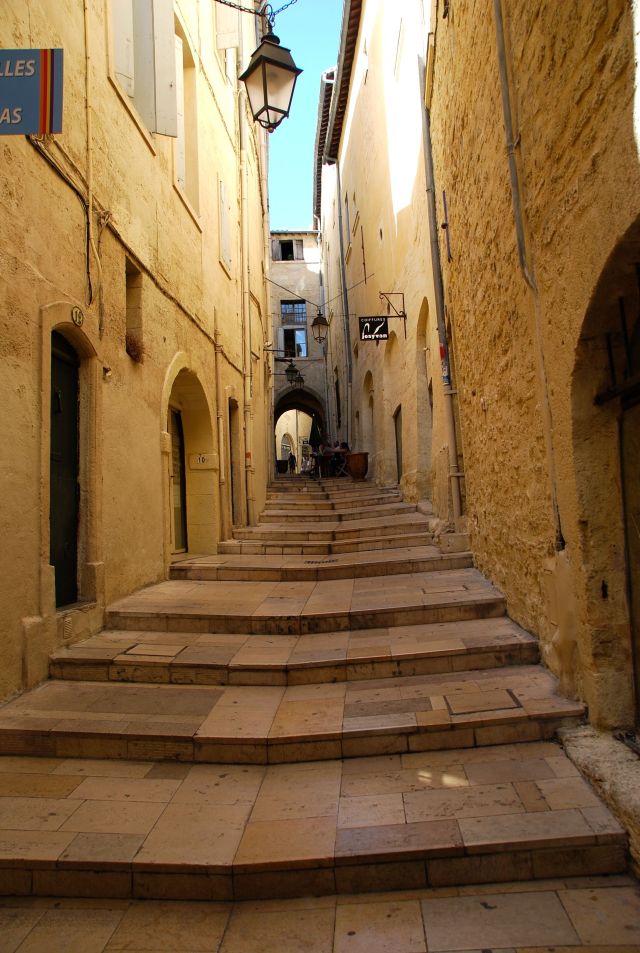 We arrived back in camp and made our way to the restaurant/bar, got seated at a table with power nearby (so I could work on the computer after we ate) and settled in for what would turn out to be another satisfying campground restaurant meal.   We ordered a ham and mushroom pizza and a small salad, and did a double take when the order arrived.

The salad was huge, with a generous amount of bacon and vegetables.  The pizza alone would have sufficed for the two of us, but being intrepid travelers we sucked it up and did ourselves proud, finishing off the lot.  Joanna excused herself to go back to the tent to read and I spent another hour or so working on the computer, listening to a combo that had set up in the corner.  A male keyboard player with lots of electronic support and a vocalist with a good set of pipes, they delivered a somewhat standard set of covers that seemed just right for the time and place.

And really, that’s what its all about.  Traveling like we do brings that type of perspective.  I tend to make it seem simple in the blog, glossing over the dirty underbelly of long term camping and how tiring it can become at times.  But that moment comes along, quite often, when you find yourself in a place you didn’t expect to be, somewhere you likely will never return to, listening to a combo that is delivering just the performance you need to transform the evening into something above the ordinary.  I slept well that night, knowing I’d covered some distance with a lot more to go, but with the hunger to do so intact.