The drive up to Lyon took a bit over five hours, as we’d set the GPS to avoid tolls.  In France, this turns what is an easy drive on the toll road into a day of speeding up and slowing down as you enter small towns and negotiate round-abouts.  It’s tiring and drains you more than you would ever expect.  We pulled into Lyon, which is split by two rivers and dealt with a complicated set of directions just as the heavens opened up and delivered us rain to set up camp in.

Camping Indigo, our home for the next two nights is a nice operation, part of small chain and the staff at the reception area were efficient and knowledgeable.  The public spaces here are very nice with a pizza/pasta/sandwich food operation, some beer and wine and a spacious lounge with fairly good Wi-Fi.  But the campsites were a woeful mess, deeply shaded and full of mud, a thick, copious sticky substance with an otherworldly quality* to it.

This is one of those moments when camping seems like a bad idea.  It takes discipline, determination and a certain detachment from reality to move forward and deal with it.  But you go through the practiced dance of setting up the tent, move sleeping bags and luggage in, securing the site against bad weather and then seeking the comfort of the dry lounge a short walk away.

That night we split an order of reasonably good spaghetti Carbonara and an inexpensive carafe of the house rose, and then settled into the familiar routine of reading, writing, and doing research for future days of the trip.

The next morning was a complete turn around, with blue skies developing early in the day and warm temperatures returning.  I made coffee on the small (MSR Firefly) stove (no sense hauling out the big one if we’re not going to cook in camp) and bought a couple of croissants from the restaurant at the lodge.  We have a dwindling supply of peanut butter left (Skippy Super Chuck) and it is amazingly good on a fresh croissant.

Lyon’s transportation system is simple to use.  We bought a one-day pass for all of the formats they offer (bus, tram, subway, and funicular) at a reasonable 5.3 Euros apiece.  One short bus and then metro ride brought us to the station where we left one building, entered another, and took the funicular up the hill to Fourvière.

Our first stop was Notre Dame Basilica, started about 1870 when the bishop of Lyon vowed to build a worthy tribute to the Virgin Mary if the Prussians spared his city. They did and construction started two years later with more than 2,000 workers on site (similar deal-making led to the construction of the basilica of Sacré-Cœur in Paris). 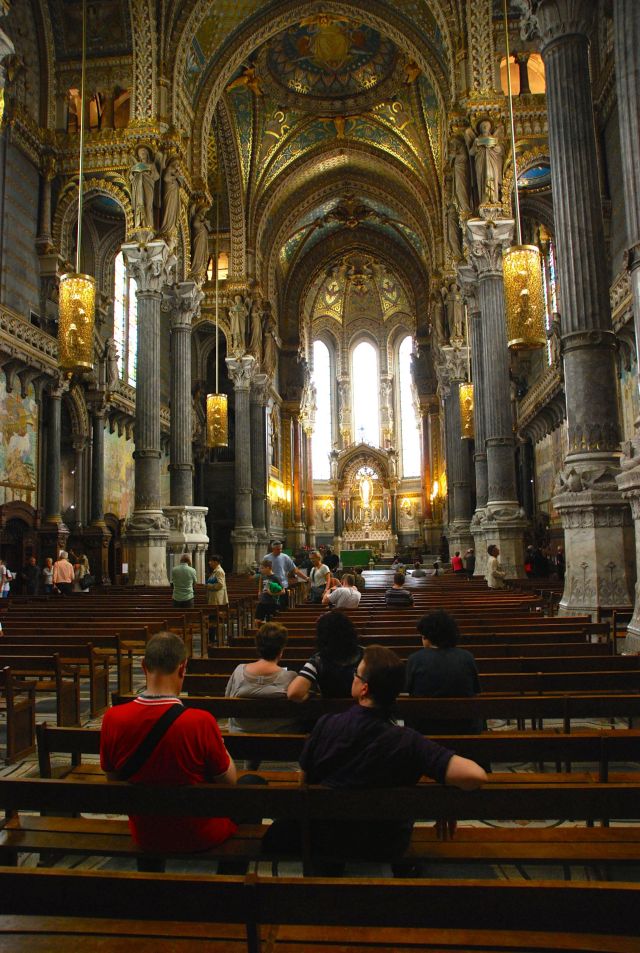 We spent a bit of time in the cathedral, and then went outside to enjoy the view of Lyon and its two rivers, the Saone and the Rhone.  Out next stop was the Roman Theaters and Gallo-Roman Museum just down the hill a couple of blocks, but when we got there it was early afternoon and we decided instead to have a nice lunch, then do the tour.

Lyon is known for its fine dining and a recommendation for lunch in the book of Steves. Fourviere, was right next to the Cathedral, with a good view of the valley below if you could get an outside table.  The book strongly suggested making a reservation, but when we stepped through the door expecting to have to eat inside the waiter showed us to a nice table out on the terrace, with Lyon as a backdrop.

A Happy Camper at Lunch

We then proceeded to spend a leisurely two hours enjoying one 17 Euro three course meal of the day and a separate entree accompanied by a bottle of wine.  Joanna’s three-course included a Lyonnais salad (green salad, poached egg, bacon and croutons), cod with seasonal vegetables and garlic sauce and a beautifully arranged platter of fresh fruit with sherbet for desert.  I had a delicious serving of Tournedos of romsteck (rump) fried with shallots, mashed potatoes and mushrooms, producing one of those gravies you can’t keep from dragging slices of bread through. 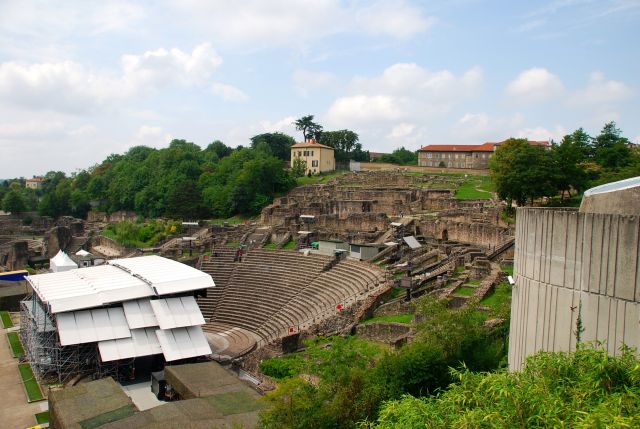 After finishing lunch we returned to the Roman ruins and spent an hour or so in and amongst the remains of houses and an impressive amphitheater, then took the funicular back down to the river and the Vieux Lyon (Old Lyon) and after a brief stop at St. Jean Cathedral, set off into the quarter in search of Traboules: passageways that worked as shortcuts, linking the old town’s three main north-south streets.  During the Renaissance, the city’s development was driven by the silk trade, which strengthened its ties to Italy.  Traboules provided important shelter from the elements when unfinished silk goods were being moved.

We walked the length of #54, one of the cities longest and it was akin to moving along an enclosed alleyway.  We exited and continued north to the edge of the Vieux Lyon and crossed the Saone River to enter the Presqu’ile, home to the Opera House and some museums devoted to the fine arts, but our destination was the Atelier de la Soierie, a silk workshop, that welcomes the public to drop in to see silk printing and screen painting by hand.  A friendly clerk showed us how the colors are applied to the raw fabric, a fascinating peak at an ancient art.

To finish up our day we made the trek up a long steep to hill to reach La Croix-Rousse home to over 30,000 silk looms in the 1800s.  Now it is known for its shops and restaurants and we enjoyed a relaxed stroll down to the river to make our way back to camp.  But first, having expended quite a bit of energy, and calories walking, we made a final stop at the highly recommended ice cream shop Nardone René Glacier for a shared cup of what is the best ice cream in Lyon.

After our large and satisfying lunch there was no need for dinner in camp, so we spent a relaxing evening in our usual routine; some time on the computer, updating files, and consuming the last bit of that inexpensive rose we’d purchased in Montpellier.  Lyon had been a good stop, one that got better once we overcame our initial disappointment at the muddy conditions.

We’d grown used to hot and dry weather in Spain and this tiny bit of wet and mud was a glimpse at what we might expect more of as we travel north and summer begins to wane.  But, if you ask any European, or for that matter someone who lives in the Pacific Northwest or even in Charlotte, they will respond that  if you wait for it to stop raining to do something, you’ll never do anything.