Paul at the Fevery suggested we drive a different route to Amsterdam, one that would take us closer to the coast and allow for a visit to Veere, a charming Dutch village along the way. It was indeed a scenic drive, but unfortunately as we pulled into Veere, there was some kind of large bicycle festival happening, with hundreds of cyclists pouring into town from all directions. What we had assumed would be a short stop for some coffee and a snack would have taken a couple of hours once we’d parked and walked to town.

We pulled away from town and moved on towards Amsterdam, looking for a gas station as we were begging to run low. We found one not far from Veere, but it was an automated station and wouldn’t take any of our credit cards (this time because I didn’t have a pin for the Visa card I’ve been using). Fortunately another station appeared about 20 miles down the road and we were able to fill up.

We arrived at Camping Vliegenbos late in the day; its location in North Amsterdam meant we didn’t have to drive through the heart of the city, a bonus. On the way we passed the airport (Schiphol) which was nice as we’d be taking Bev there for her flight home in a few days.   The campground is part of a large sports area and park, so finding it at first is a bit tricky.

I first stayed here in August 1977 with Rendy and Evan, then again in September of that year when Rendy and I were wrapping up our trip and needed to sell the VW van we’d purchased in Amsterdam earlier. Joanna and I would return in 1984 for a few nights and so I have many fond memories of the place. Much of it has changed in the thirty years since Joanna and I visited; the addition of a market and adjacent café were a welcome change.

What hadn’t changed was the overwhelming number of young people staying there while visiting the city, and all of the fun things it has to offer. When we inquired to see if any of the Caravan spots were open (so we could park the car next to the tent) the answer was no and we were advised to consider camping in Field Four as it would be quieter than the others. We walked down to the field and realized that it would be a long way from the car, having to haul tent, sleeping bags and luggage there. Field Two was closer (Field Three was next to where we parked, but was for caravans) so we decided to take a chance and set up there. I mean, how loud could it get?

Of course as we began to set up the tent it started to rain. We’d convinced Bev of the merits of camping, particularly in Amsterdam as hotels are very, very expensive there. With the rain coming down I’m sure she had a few choice things to say about that decision. But the tent got set, bags got transferred and soon thereafter the rain stopped.

At the advice of the reception desk (overall they were incredibly helpful and courteous under trying conditions) we walked into the nearby suburb in search of food. After quite some hike, the restaurant that was suggested turned out to be closed, probably for a holiday. We walked back towards camp and stopped in at a snack shop, Het Smikkelhoekje, we’d spotted across the street from the market (Dirk van den Broek) we’d eventually make use of.

They had a pretty comprehensive menu and I ordered a chicken schnitzel with frites and a salad, Beverly a salami sandwich with salad and Joanna an egg roll and a small sandwich with a curry chicken filling. The food came, hot and good with substantial portions, so much so that Joanna saved her sandwich for the next day. The total tab, including my beer and a milkshake apiece for the girls was 22 Euros,

We hiked back to camp and before turning in early, checked with reception to see if any caravan spots might be opening up the next day. They responded yes and to advised us to check back in the morning. Moving might be a bit complicated the next day as Bev and Joanna would head into town before noon for a walking tour and I would take the Highlander to a nearby dealer for service. I’d then meet them at the train station around 4pm, as Beverly was to fly to Copenhagen that night to visit her son Dillon who had just taken up residence there for his job as a full time Au Pair.

It was pretty quiet when we went to bed and remained that way for a little while. An hour or so later though, and then throughout the night, the sounds of revelers permeated Field Two, filling the tent as if we were part of the crowd. It was a night of tossing and turning, falling asleep to be woken by loud voices first in one language, then in another. I can remember the day when I could go until the wee hours of the morning with friends, fueled by alcohol and the simple desire to live large. It soothed me a bit, that remembrance but it didn’t make sleeping any easier. Maybe tomorrow would bring good news. 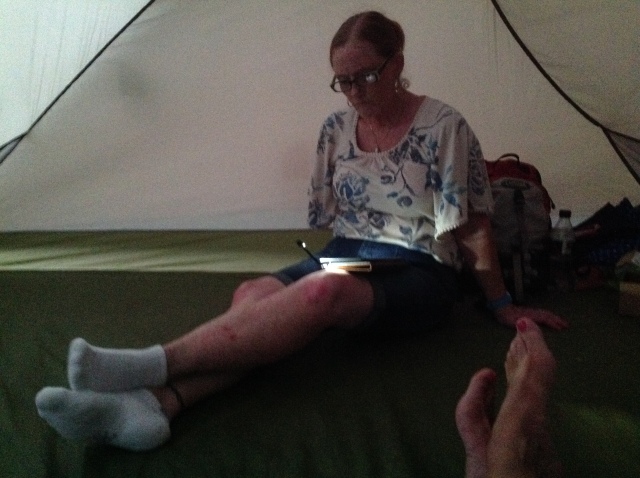 Bev in the Tent