Anticipating a complicated morning and hoping to be able to make a move to Field Three before we ran our various errands, we bought some coffee and chocolate croissants from the market and then checked in at Reception to see about moving. The gods of travel smiled upon us that day as Reception advised that our spot, number 110, was open and that we could relocate there any time we wanted.

We quickly moved the sleeping bags and pads into the car and then Bev and I carried the tent down to Field Three, placing it in the corner of site 110. A short bit of work completed camp set-up and leaving us all ready to go about our day. Joanna and Bev left before noon for their guided tour, taking the bus into the train station, a very convenient and short 15-minute ride. Their tour was excellent, lasting nearly four hours. I can’t report on what they saw specifically but can say that for the next two days each would point out things they had learned while taking it.

I left for the Toyota dealer not long after and ended up having an enjoyable encounter with the staff there, who were excited to work on the Highlander, a car they’d heard about but not seen in the Netherlands. I think that Toyota rebadges it as a Land Cruiser for Europe, but not the Hybrid version. On the way back to camp I stopped at a nearby shop, Boer Geert, for a delicious pastrami sandwich. They have a simple concept; various selections of interesting meats are displayed with the price per sandwich and when you make your selection, it is heated, other ingredients added, and a hot final product comes your way.

Parking the car at camp I took the bus into town; we made use of multi-day passes for Amsterdam, as we knew we’d be accessing the center quite a lot. Fare strategy for each city depends on how often you plan to go to town and what the pricing structure is like for passes or single rides. I met the girls at the train station as agreed upon and we then sent Bev off to Schiphol for her flight to Copenhagen.

Joanna and I spent the rest of the evening walking the streets of central Amsterdam. As it started to rain off and on we’d duck into places to get dry. Our first stop was at a bar, where we enjoyed a beer and a bowl of Dutch pea soup, loaded with sausage. More walking eventually brought us to a restaurant where we shared a delightful salmon salad and quite possibly the worst bowl of French Onion Soup I’ve ever encountered. The soup’s body was extraordinarily salty and the cheese was like something from another dimension, a soft outer surface covering a wafer of something that might have been cheese at one time but now resembled a communion wafer. 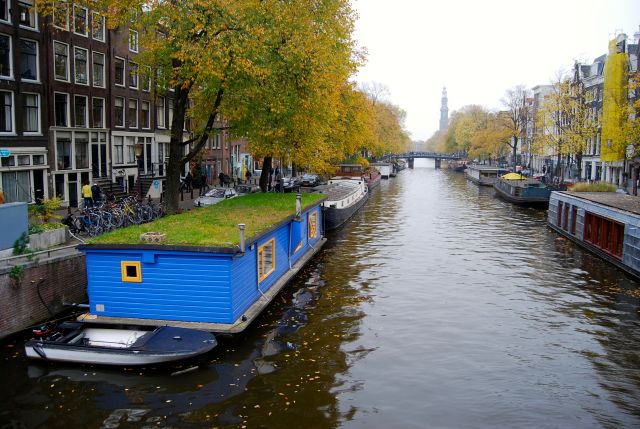 With no other plans but to pick up Bev the next day (Thursday) at the train station in the early evening and the weather looking good, we took off for a bike ride out to Marken, about ten miles away. I’ll summarize all of our bike rides during our time in Amsterdam in one post, but for now will say it was an enjoyable day and good to be back out on the bikes again.

We met Bev at the train station after her flight back from Copenhagen and then jumped on the tram for the restaurant we’d picked out in advance, Café De Oude Wester. I’d wanted to eat at a place that would provide Bev with a taste of typical Dutch food and it seemed like a good choice combined, given their posted menu, with a convenient location. The food was passable, just not very memorable; when you are traveling for any length of time, many of the meals fit that bill.

Our move to site 110 was fortuitous. Tucked into the corner of Field Three, it was a quiet little oasis amidst the constant hubbub and activity that personifies Vliegenbos. We slept well that night in anticipation of a very busy next day, Bev’s last in Amsterdam and in Europe. 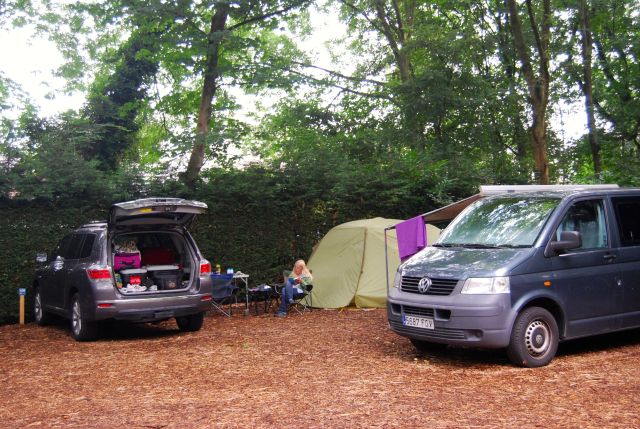 That Friday our first stop was the Anne Frank House, located on Prinsengracht (Princes Canal), a short walk away from the tram stop. Joanna and I had checked out the route the day before to make sure we had the timing down as we had purchased tickets in advance for a 9:30 am entrance into the House. The beauty of buying these tickets in advance is that it allows you to skip the line, a huge advantage for this place.

This is a sobering visit; one that reminds you of the horrors of that time and reaffirms how resilient people can be in the face of unbelievable stress and hardship. At the end of our tour we stopped at the nicely appointed museum café for a coffee and snack (Ben and Jerry’s Ice Cream as it was on sale. It is very, very expensive here). 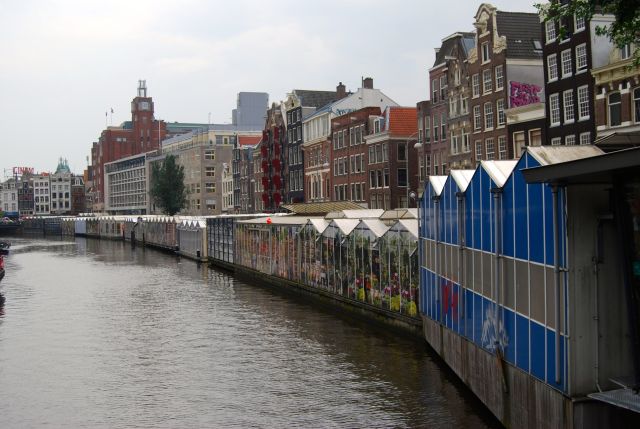 Back out on the street we passed down Prinsengracht and on to the Singel Canal to walk the length of the Flower Market. This is a full block of stall after stall of vendors selling seeds and flowers.

From there we walked towards the Dam Rak and found a canal tour vendor with good pricing. The next tour was in 30 minutes and he recommended a sandwich shop just around the corner for good value. We entered the shop and each of us ordered a variation of a common theme, some meat and interesting cheese or other accompaniment. Packaged to go we took them onto the boat and were rewarded with the sight of a drink vendor pedaling beverages including beer. Sitting back with a great impromptu lunch, we enjoyed the tour and its narrative flow; like with Brugge offering a different glimpse of the city than you get from walking.

Jumping back on the tram we rode down to the Museum area to take in the Van Gogh. Joanna and I visited with Doug Hoggatt back in 2007 and it was just as impactful now as it was then. 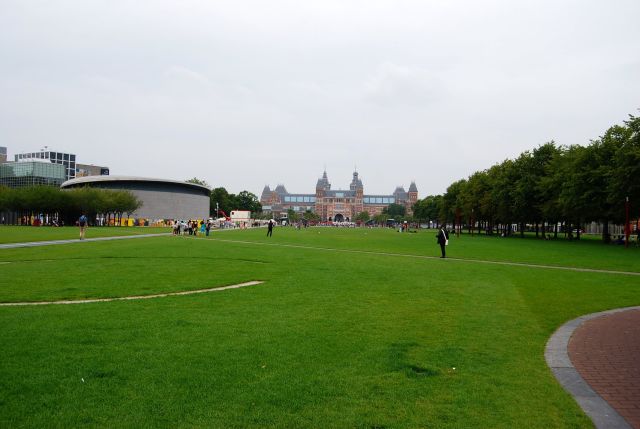 More crowded than before, it is harder to connect with the individual paintings and yet, the power of many penetrates the crowds. What is amazing about this guy is that he was not terribly technically proficient. His genius came in how he assimilated different styles and trends from his time to create a vibrant and compelling story.

Van Gogh Museum from the Back

We finished up with the Van Gogh and starting to run short of time, took the tram back up to Dam Square so as to launch our walking tour of the red light district. As it was early in the evening, few if any, of the windows were occupied leaving the casual tourist wondering what the big deal was. Having been through this area before, particularly with Doug in 2007 later in the evening, the crowds increase to pack the narrow canal side lane as you walk past window after window of lovely ladies of the night.

We finished up our walking tour and started back to Central Station for our bus. I grabbed a hot dog from a stand as my meal for the evening and the girls settled on the best final dinner possible, a waffle with chocolate sauce, banana, and ice cream. These two have known each other since their teens and to see them together in action is a thing of beauty.

We’ve been fortunate to be able to travel at least once a year with Beverly and share some fantastic memories because of it. The last three years have seen us hit Cancun, Costa Rica, and now Europe. What new adventure could be on the horizon? Only time and our imaginations will tell.