Keen to continue day tripping, we set out for Edam and its famous Wednesday cheese market the next day. Located not far from Vliegenbos, the drive didn’t take too long and as we pulled into the outskirts of town we were directed into a grassy parking lot already more than half filled. We walked the quarter mile into town, following the crowds of people through the narrow streets to the square where the cheese market is held.

It was jammed, with people standing six to eight deep watching the show. And it was a show, elaborately choreographed and staged, primarily by volunteers who went through the motions of hauling small rounds of cheese into the square, weighing it, and going through an illusory bidding process. As mentioned in an earlier post, this is how these towns now subsist, given that the former industry that provided work has disappeared. Say what you want about viewing the manufactured experience, it enables these small communities to survive.

It took quite some time to work close enough to the fencing to get a few representative pictures and when the event wound down to its completion we walked out to the edge of town to visit the Grote Kerk (Big Church).

Built around 1500, this surprisingly large (for the size of the town) church’s interior is covered by a ceiling constructed just like a stone vault, but built of wood because heavier materials would have made the building sink into the wet ground. Backtracking to the center of town we stopped at De Prinsebar and Eetcafe for their 8 Euro sampler of five regional cheeses with bread and a bowl of pea soup, way more food than we needed but good and filling none-the-less. 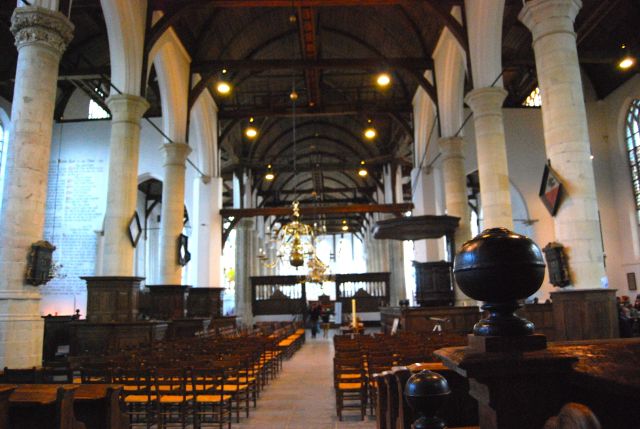 From Edam we drove to the neighboring town of Volendam, parked and toured the small city museum, which traces the history of the area with a primary focus on its former existence as fishing community. We finished up at the museum by having a lengthy conversation with a staff member about the effects of slavery, Holland and America’s involvement in it, and who should, or shouldn’t feel guilty.   While interesting, it was quite confusing as we tried to figure out what point she was trying to make.

We drove back to camp along the route we’d taken the day before on our bikes, much easier this time behind the wheel of a car. Arriving back in Noord Amsterdam we dropped by the local branch of the library to use the internet for a couple of hours, then stopped again at the Dirk’s market for dinner supplies. Inspired by our sandwich of the day before, we bought Portobello mushrooms, sliced bread and a Dutch cheese that we hoped would come close to the complex nutty flavor of that we’d had at Coffee Company.

Our Camping Gaz stove has a handy grill (note our grilling activity in prior posts); we haven’t used it as much as we thought we would as it is a bit of a hassle, but it was perfect for making the sandwiches. They were good, just missing that distinct flavor from the cheese that we were seeking. We’ll have time to perfect this new addition to our repertoire when we return home.

Although site 110 was proving to be just about the best spot at Vliegenbos, for the next couple of nights we would be entertained by late night revelers returning to the cabins adjacent to us, in between fields three and four. One group in particular, Germans I believe (nationality doesn’t matter when you are reveling) came home with a shopping cart. A freaking shopping cart with bottles. Do you have any idea how much noise that can make when it is being drug over brick pavers at two in the morning? A lot. It made a lot of noise.

Undaunted we went back to sleep and arose the next, Thursday, to glorious weather that would allow us to execute our plan for my birthday that day, to ride our bikes up to Edam, down to Volendam, take the ferry to Marken, and then ride back to camp, finishing off the day with a nice dinner in Amsterdam proper. 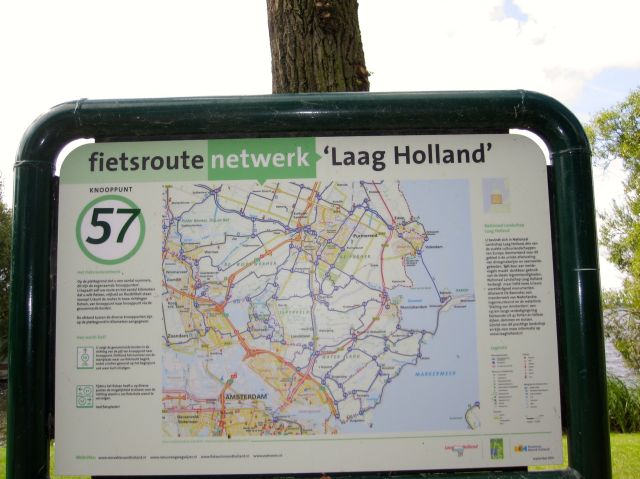 We set out on the now familiar route, but instead of turning east to ride to Marken we followed the signs towards the line of small towns that would lead us to Edam. We entered the village of Holysloot and following the signs, confident they would lead us in the right direction, ran into a dead end, in what appeared to be someone’s front yard. 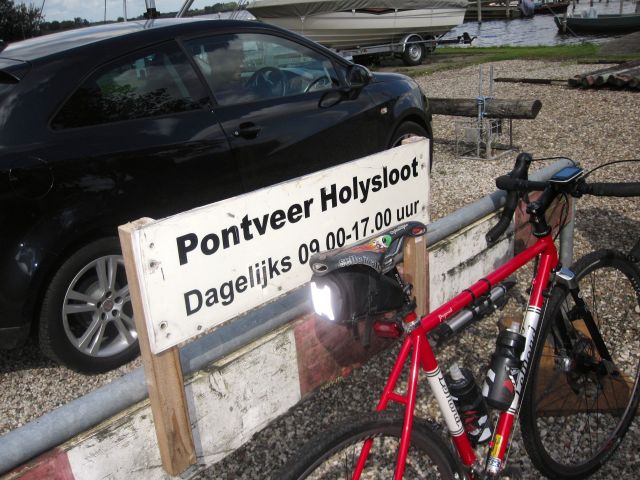 It turns out that you have to take a small ferry across a tiny body of water to get to the field on the other side to resume the route. This was not immediately apparent, again a problem with not being able to read the signs that were posted, but fortunately the ferry operator, a woman about our age, came out of her house and let us know that she would take us across for one Euro apiece. 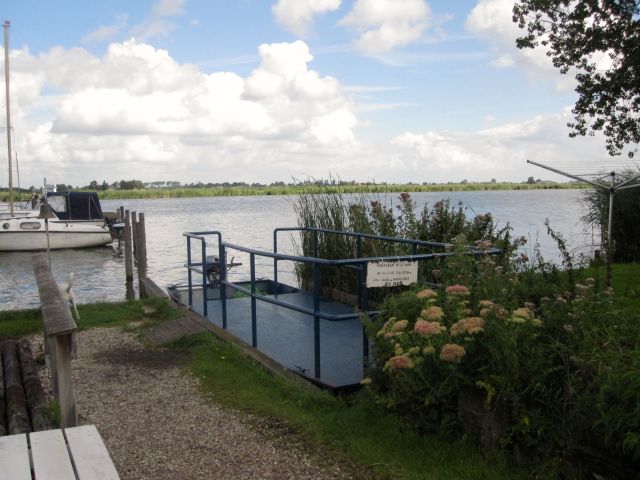 Yes, That is the Ferry

Sure enough, we loaded our bikes on the “ferry” and along with her dog (who kept trying to bite the water), motored across the pond to the other side.

Her last words to us as we disembarked and prepared to move along were to “cross five bridges” and you’ll find your way. This part of the country has been reclaimed from the sea and is a combination of marshy fields and small irrigation channels, thus the need to cross bridges. We rode some of the fields and walked the others and after crossing all five bridges found ourselves back on the road to Monnickendam, which would then lead us to Edam.

A much different place without the cheese market going on, we rode up into Edam and located a bike shop, one specializing in electric bikes, but very well stocked with accessories. After many months of searching, I was finally able to locate a bell that would fit on my bike, purchased and installed it. We rode off out of town, turned left and covered the short distance to Volendam in very little time, where we boarded the ferry in its charming and very crowded harbor, full of restaurants and shops, and made the 30 minute ride to Marken.

A lovely day to be out on the water, we had just enough time to enjoy, you guessed it, two cups of coffee and an apple strudel. Disembarking in Marken, we rode back through town, exited at the parking lot and instead of turning right to cross the causeway turned left to head out to the lighthouse.

This being flat farm country, you could see it in the distance and a short time later we arrived, used the restroom and then returned to Marken, crossed the causeway, and finished the last ten kilometers or so to camp in nice conditions, no strong headwind to battle this time. 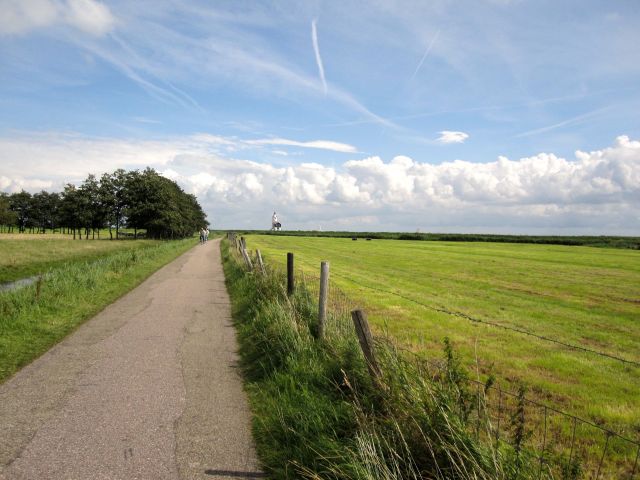 After cleaning up and rehydrating in camp with our customary Grolsch beers, we took the bus into town and the tram to Prinsengracht for dinner at the highly recommended Winkel. It was a nice night out although some rain had been predicted and with the restaurant situated right on the canal, outdoor seating was the preferred choice. We took a table just under an awning, a piece of good fortune as it would start to rain later.

We ordered some beers and a delicious starter of zucchini strips wrapped around a mixture of cooked pine nuts and tomato. Our main courses were equally good, my steak with pepper sauce and potatoes and Joanna’s winning dish of the night, Noodles with Sesame Salmon. Chunks of fish cooked just right and tossed in a semi-sweet sauce and noodles. We finished with Winkel’s much acclaimed apple pie and ice cream and then received the biggest treat of all, the bill.

The menu is only posted on blackboard as that night’s selections change every day. We didn’t get a chance to see it when we arrived and simply ordered from the waitress based on her descriptions. Having no idea what the prices were, I was expecting an expensive meal and was more than pleasantly surprised, when I went to the bar to pay and was advised that the total was 52 Euro ($67). As we returned to camp we remarked that if we lived in Amsterdam, Winkel would be a regular destination for us, much like Rivoli is in Berkeley.

Friday, our last day in Amsterdam was full of errands. We efficiently used a one-day metro pass to perform a bunch of shopping, returned to camp and then ran to the Dirk market for dinner stuff, gassing up the car in anticipation of our long drive to Berlin the next day. Dinner in camp finished the day and our ten days in a great town. Throughout our visit we commented on how much we liked Amsterdam, and could see spending an extended time there. If we’re lucky, someone there just might want to trade houses for a few months with a willing couple in Charlotte. If they do, I invite you all to come visit us. We’ll go to Winkel for dinner.