The long drive to Berlin was easier to manage as it was all on autobahn, with a number of stretches that had no posted speed limit. The GPS we are using, a Garmin 3590 (a very fine device) shows the current speed limit and your actual speed in the lower right hand corner of the display. At first I thought something was wrong when I glanced over to see that no speed limit was listed. It then hit me that we were on that part of the autobahn.

Going fast in a hybrid Highlander loaded with camping gear and bikes on top is not really an option, but I’ve driven faster cars on these roads and while exciting, its not all its cracked up to be. Unlike the interstate driving that we are used to, where you put the car on cruise control, turn up the tunes, and sit back for what is pretty much unencumbered driving, folks here in the fast lane are going really, really fast. The no speed limit roads are usually three lanes wide, which means you’ll spend most of your time in the middle lane, using the fast lane to go around a slower car.

But don’t dawdle out there. As soon as you lose focus and drift off, you’ll see the flash of headlights in your rear view mirror, drawing your attention to a car rapidly approaching you, anticipating that you will do the right thing and get out of the way before they run into you.

If you are lucky, no one is in the middle lane and you move over. If not, well, things can get messy. Worst of all is to be a slower moving car stuck over in the truck lane, constantly dodging in and out of the slow and middle lanes. Try it in a 1968 VW van like Rendy, Evan and I did in 1977.

We pulled into Hotel and City-Camping Berlin in the late afternoon and were first advised that they were full, but if we could find a spot for our tent we were welcome to stay. Starting a trend that we would experience for the next few campgrounds, we could not park next to the tent; we would became adept at hauling gear back and forth. 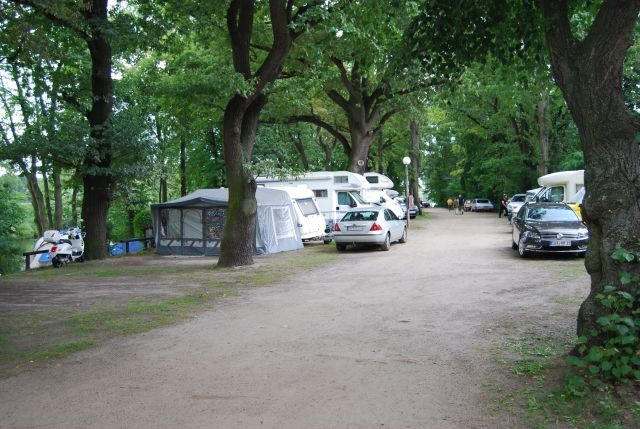 It being late in the day and not familiar with the surrounding area, we took advantage of the small beer garden set up near the Saatwinkler Damm canal (the campsite is bordered by its two channels) and enjoyed a serving or so of the local beer, Berliner Kindl, a bratwurst and a tender and nicely marinated pork steak, both served with potato salad. We purchased some Wi-Fi time (available for 1 Euro an hour, of good quality), caught up on email and went to bed, eager to run into Berlin the next day, but uncertain as always about the logistics. 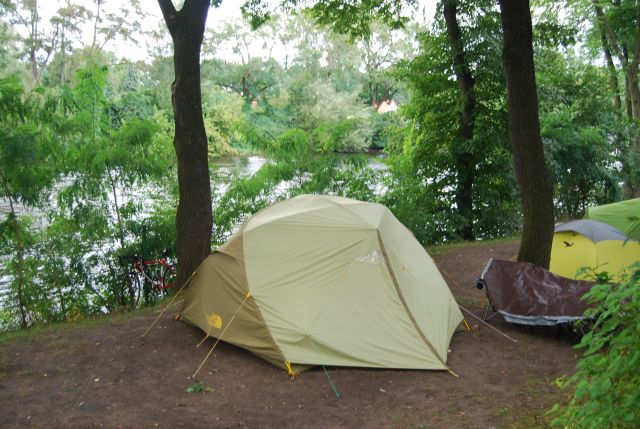 Our Site on the Canal

For some reason we couldn’t get motivated the next morning to do much and by the time we knew it, early afternoon had arrived so we decided to just spend the day in camp. We walked a kilometer or so into the nearby suburb of Hasselhorst to see what shops and restaurants might be available. Being Sunday, not everything was open but we did take note of a nice looking market, Reichelt, a number of informal restaurants and one nice looking spot, the Mali Raj.

We stopped in at a snack shop, featuring Shawarma (Doner) and as we gazed at the menu, were drawn to two well stocked refrigeration displays, standing side by side, with a large selection of local beers, all priced at about a Euro apiece. We ordered a Currywurst and Fries to split for lunch and after watching the guy behind the counter make a number of large Shawarma wraps, ordered one of them with chicken to take back to camp. Total tab for the wurst, three beers and the wrap was 9.8 Euros; inviting pricing that would bring us back again.

Berlin has pretty cost effective all day metro passes. A one-trip fare good for travel in one direction for up to two hours on any of Berlin’s public transportation options is a 2.40 Euros; an all day pass is 6.70 and given that Berlin does not have a central core to visit, utilizing its expansive system is the best way to get around town. So each day we planned to head into the city would require that we each buy a pass

We used the U7 line to get from Hasselhorst into the city, exiting at Potsdamer Platz, one of two stations that would become our anchor terminals (the other being Alexanderplatz). We opted to use one of the hop on/hop off tour companies, much like we did in Porto, to give us an overall picture of the city and to help us narrow our focus to what sites we visit in the coming days. 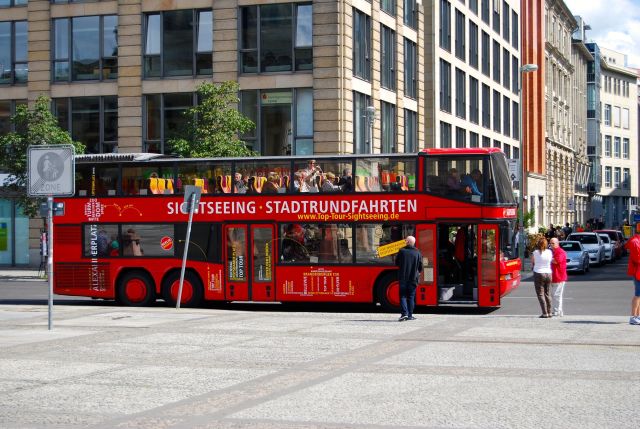 Once on the bus it proceeded almost immediately to Checkpoint Charlie. We hopped off and spent about an hour there, stopping to grab a quick snack at the McDonalds located almost directly across from the former checkpoint site. What we would consistently witness in what was East Berlin, and reinforced in Prague and Cesky Krumlov, is just how far and how fast these former communist possessions have come in the twenty years since the fall of the wall in 1989. 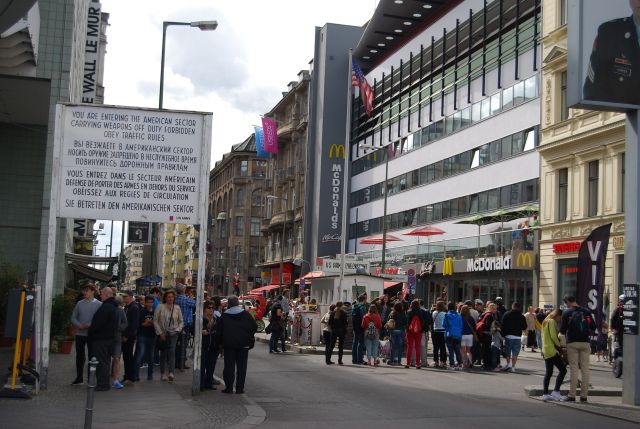 Somewhat like the cheese market in Edam, what one sees at many of these former cold war sites are restorations; as so often occurs the historical significance of sites is not recognized once they have outlived their usefulness or are deemed to represent some fallen empire. Much of western civilization is built upon the ruins of those that came before us. Such is the case with events in our own lifetimes; little if any of the Berlin wall remains and those structures and institutions that played a critical role during the cold war were quickly dismantled once it was over. 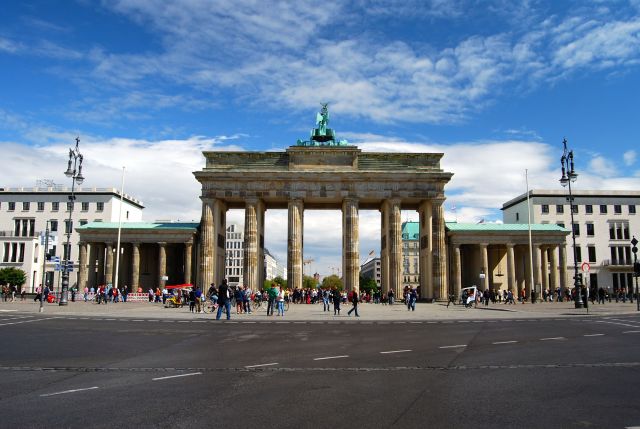 Back on the bus we continued our tour, jumping off at the Brandenburg Gate, then walked over to the Reichstag to check on tickets (you need to reserve in advance to see the interior). The line was long and we decided that we’d pass on that visit. On the way we stopped at one of the many Currywurst stands that populate the city (Berlin claims to have invented the tasty treat), then returned to the bus to finish the tour.

We would revisit many of these sites in the coming days when we rode our bikes into town, or took one of the walking tours in the Steve’s guide. We hopped off the bus again at Zoologischer Garten metro stop to do a bit of window-shopping, then back on for the return to Potsdamer Platz and the U7 for our return to camp. 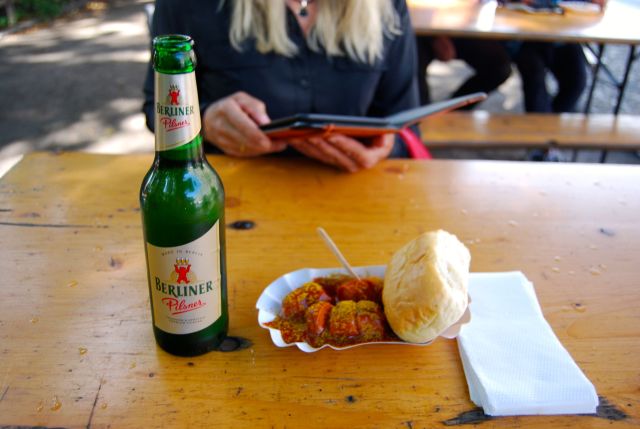 Instead of taking the bus from the metro station back to camp we walked the quarter mile or so into Hasselhorst and stopped in for dinner at the more formal of the restaurants there, the Mali Raj. Billing itself as an international house, it featured classic German cuisine as well as some Croatian selections. We split a Goulash Soup and Joanna opted for the trout, brought whole to the table while I had a Jagerschnitzel (Hunter style – with mushrooms and gravy). Most German food is hearty and filling, but also a bit predictable. Thus was the case here. Everything was nicely prepared and good tasting but still, a schnitzel is just a schnitzel. With a couple of beers the total tab came to 30 Euros, reasonable for Germany.

We walked down to the bus stop for the short ride back to camp (we would ride our bikes into town to the market many times in the coming week) feeling good about having conquered that first day of apprehension that all new towns bring for us. We’d feared that Berlin would be unmanageable, to spread out to handle.

Our first encounter with its metro had been positive, made even more so by a helpful gentleman who, when seeing us confused on the U7 pulled us off at a station and personally guided us to the U line we’d need to get to the Potsdamer Platz. How many of us would take the time to perform that type of favor for a stranger? We’d indeed been welcomed to Berlin. 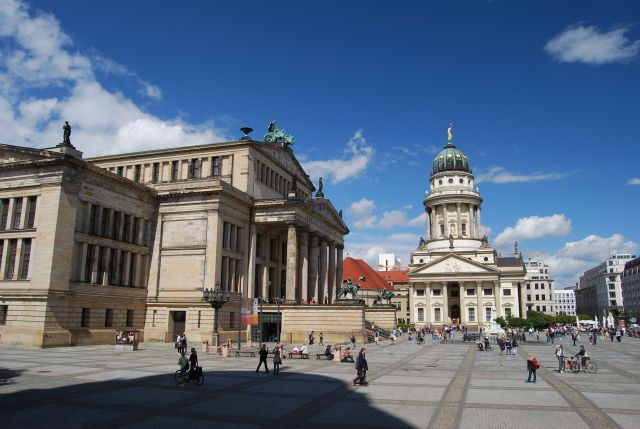 Near Potsdamer Platz – First Stop on Hop On Hop Off