Europe 2014 – Vienna – On the Trail of the Great Composers

Although just a short 200 kilometers (126 miles) drive from Cesky Krumlov to Vienna from a mileage perspective, the need to take country roads in the Czech Republic added extra driving time to the trip. We entered Austria a couple of hours after noon and stopped for gas at an OMV station that had a self service car wash, as the Highlander was covered in mud. We gave it a quick clean, purchased our 10 day toll sticker (a bargain at 8.5 Euros), ate a delicious ham and cheese sandwich (with tomato, lettuce and cucumber slices) from their small café and Joanna took over driving to Vienna.

After a short stint on freeways we were directed to a scenic, but curvy mountainous drive into Camping Wien West, located on that side of Vienna in a suburb. We had stayed here in 1992 with Jessica and found it to be a well-equipped site with good access to central Vienna. We arrived to darkening skies and entered the reception area to register. Part way through the process we inquired about the hours of the store and café and were told that they, along with the reception, would close at 6:00 pm for the next week due to a staffing issue.

This wasn’t going to work for us given our need to find shelter in the evening, particularly with the threat of rain. We asked about the company’s other sites and were advised that their Neue Donau location was still open and only about 20 minutes away. So we navigated through the heart of Vienna, thankful it was early Sunday evening and the traffic was light. We arrived as estimated and checked in, setting up our tent at the very back of the campground in the tent area. 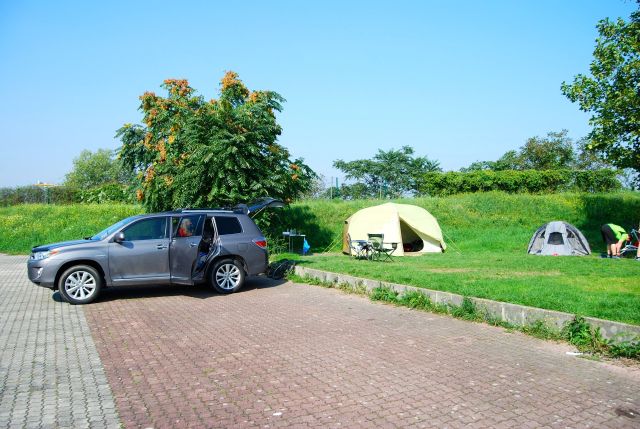 The campground was quite crowded; as we would find out later it was mostly folks in town to see the soccer match between the local and the Swedish teams. As it was late by this time, we just ordered a pizza from the small café/store, drank a couple of beers, and checked out what would turn out to be yet more incredibly slow Wi-Fi.

The camp store opened early enough each day so that I could hike down and pick up yoghurt and some bread or pastry for breakfast. We bade good morning to the two German women from Frankfurt camping next to us, their having cycled to Vienna from home and whom we would talk with throughout our stay. We made our way into town with a brisk walk to the metro and just a few stops to the Opera station.

We began our walking tour there, the edifice that helps to symbolize Vienna as the world capital of classical music. Built in 1869 in the neo-Renaissance style, its former musical directors include Mahler and Strauss with Pavarotti, Callas and Domingo, among many others, having performed there. In the plaza in front hangs a giant outdoor screen that screens some of the performances; twice we’d walk by in the evening and see folks sitting in wait for the beginning of the show.

At the corner of the plaza sits the famous Sacher Hotel and its Café, home of the Sacher Torte. Invented in 1832 by Franz Sacher, desert chef to Prince Metternich (who is known for having redrawn the map of post-Napoleon Europe). We continued past the hotel and found ourselves in Albertinaplatz, bookended by a tip of the Hofburg Palace and the large Vienna TI and home to the Monument Against War and Fascism, which commemorates victims of all wars and violence, with an emphasis on the dark years of 1938-1945 when Austria came under Nazi rule. 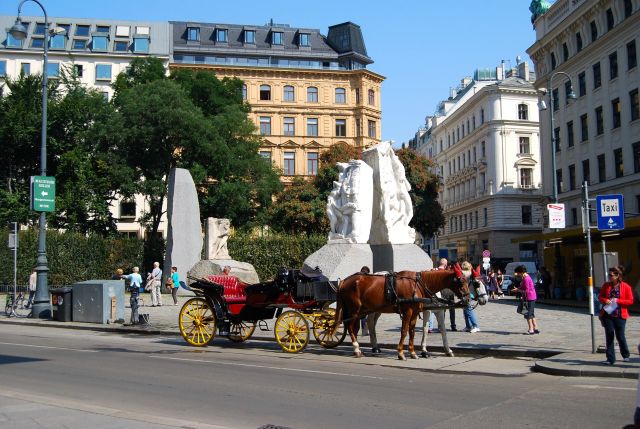 We backtracked to the Karntner Strasse, Vienna’s main pedestrian shopping street, stopping briefly so that Joanna could take a look in the J&L Lobmeyr Crystal shop (founded in 1823). Not being able to afford $400 napkin rings, we continued walking up the Karntner Strasse to the Neuer Markt, taking a brief look at the Kaisergruft, which sits above the Imperial Crypt, home to the remains of most of Habsburg royalty. 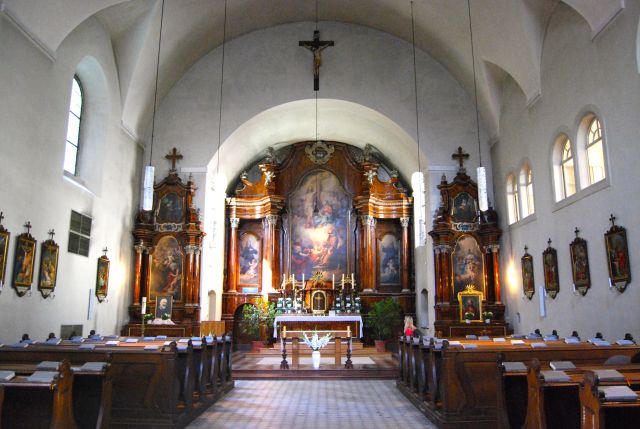 We decided not to pay the entrance fee to see the crypt, instead opting to spend our travel dollars at Kurkonditorei Oberlaa, a recommended food stop. We enjoyed two coffees and split an apple strudel, enviously admiring the fine looking lunch plates being served. The one part of traveling here we’ve not mastered is taking advantage of the lunch specials. What you get is essentially dinner at lunch, but with lunch prices; it is the way to enjoy good food at reasonable prices. 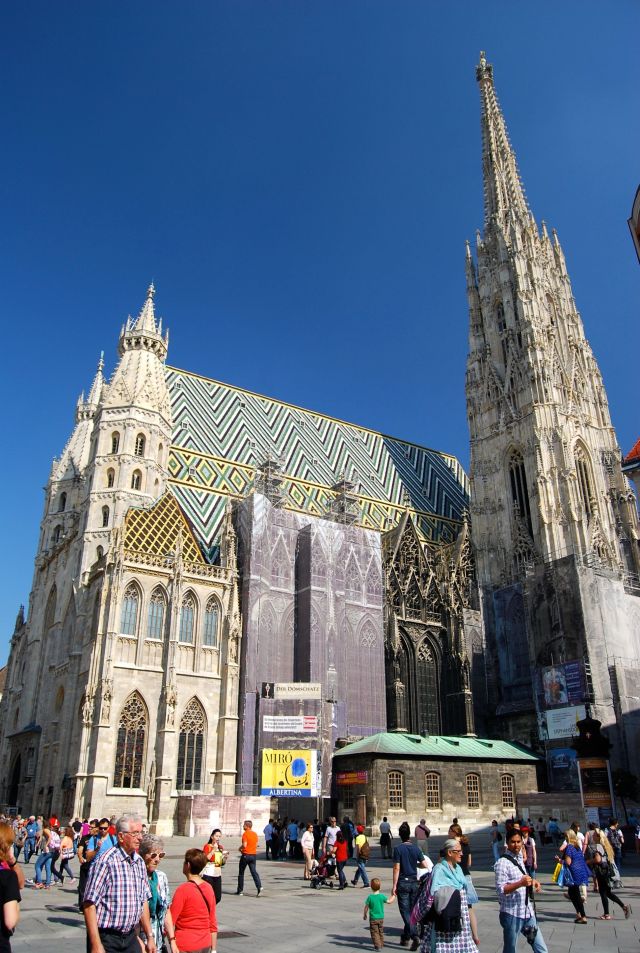 Next up was the Stephansplatz and the cathedral, St. Stephen’s, from which it derives its name. Built between 1300 and 1450, it is known for its 450-foot south tower and colorful roof. The building was heavily damaged during WW II but the town’s love of this building created the financial where-with-all to rebuild it to its original splendor. In 1992 I climbed to the top of the south tower with Jessica, carrying her down the narrow spiral staircase on the return, slipping and falling along the way. As a family we still remember that day, one of those family memories, some good, some bad that become legend.

While Joanna was climbing the tower I grabbed a beer from a nearby pizza joint and enjoyed the warm afternoon sun, sitting on the steps of the building next to the cathedral.

Joanna rejoined me; we finished the beer, and walked down the Graben (ditch in German), once a moat to St. Peter’s Church, built in 1679 by Leopold I as a thank you for surviving the plague that year. This church is baroque at its best, over the top decorations and adornments. We’d arrived just in time to take in the last 20 minutes or so of the daily free organ recital, a rate treat to hear classical music in such a beautiful setting. 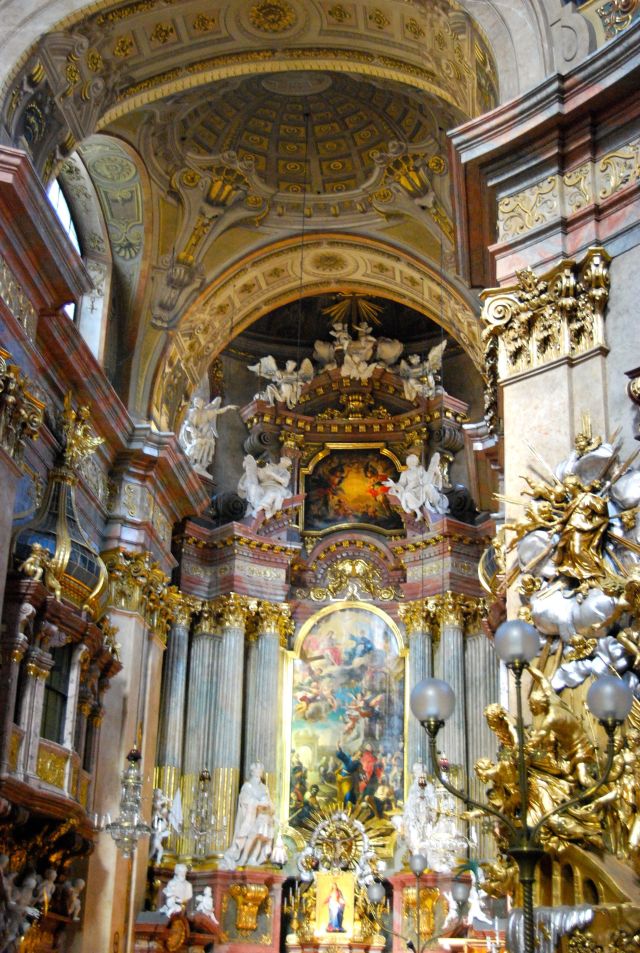 Leaving St. Peter’s we waked the Kohlmarkt, Vienna’s most elegant and unaffordable shopping street (also home to Demel, the famous cake shop) to Michaelplatz, dominated by the Hofburg Palace. This is the complex where the Habsburgs lived, except in the summer when they lived out at Schonbrunn Palace, which we would visit later.

We’d toured the palace in 1992 and the famous Spanish Riding School, which is housed there and opted not to tour either this time around. Not sure about our next steps, we stopped at the Hofburg Stuberl in the tunnel to Heores Square, a small sandwich bar with reasonably priced cold beer.

We had a couple as we discussed our plans for the next day or so.

Beer at the Hofburg Stuberl

As it was getting late in the day and we’d not seen any markets close to the campground, we stopped in at a recommended restaurant, the Rosenberger Markt Restaurant. The restaurant is located downstairs and a compelling reason for eating there, beyond the recommendation, was good quality Wi-Fi.

The place has a cafeteria ambience to it, but the food was top quality. I ordered a nicely cooked veal Wiener Schnitzel (one must in Vienna, mustn’t one?) that came with an almost unlimited amount of sides from a buffet bar. We also picked up a hearty mushroom soup and some beer, finished a delightful meal in the heart of Vienna, good quality Internet access enabling Joanna to Skype her Mom, something we’d not been able to do for days given the lack of good Wi-Fi.

We made our way back to camp, satisfied with a good day of sightseeing, one that built upon our last visit in 1992. Our plan for the next day was to ride the island next to camp and then, if we felt good, to hit the Haus Musik later in the evening to take advantage of reduced night time pricing. Vienna awaited us.

Monument Against War and Fascism: https://www.ricksteves.com/watch-read-listen/read/articles/viennas-monument-against-war-and-fascism