Determined to ride the next day, Tuesday, we conferred with the girls next door. After having ridden their bikes from Frankfurt, they were up each day for biking outings in and around Vienna. We asked them about places to ride and they confirmed that the island near camp was the place to go.

Danube Island sits between the river and a canal (Donaukanal) that was created in 1873 from the river’s southern branch to help control flooding. It is 21 kilometers long and provides all types of recreation to the citizens of Vienna. Access was easy; we rode out of camp, turned left for two blocks, crossed the main roadway at a traffic light and joined a bike path that runs along side the canal. A short distance leads to one of many bridges to the island, this one for bikes and pedestrians and joined one of the islands paths at kilometer 8.

We rode all the way up to the northern tip of the island, about 13 kilometers, mostly hugging the shoreline. Along the way we passed numerous swimming docks and any number of canal-side bars and cafes.

When we hit the end we turned around and started back down the island, stopping about halfway to take a break at a café to enjoy, yes you are way ahead of me here, two coffees and a strudel.

Hunger momentarily satiated; we took off for the southern end of the island. Unfortunately, the paths kept branching in numerous directions and at one turn I lost Joanna. I waited at a pullout for some time, and eventually concluded that we’d separated. I couldn’t contact here as my phone was in the trunk on her bike, so I rode to the end of the southern end of the path thinking she might have continued on. 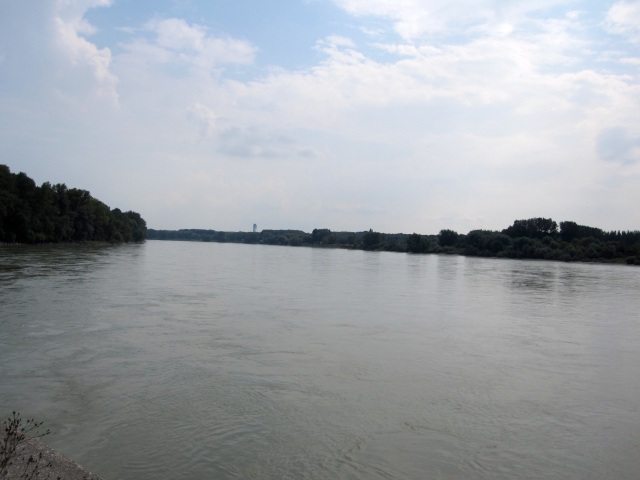 Southern Tip, Where the Canal and River Reunite

She wasn’t there when I arrived and after waiting a bit, I resumed riding north to get to the bridge to take me back to camp. Nude sunbathing is allowed on the island and the path I took was along the sunbathers favorite stretch of beaches. One thing to keep in mind when discussing nude sunbathers is that in most cases, these are not glamorous movie star types of physiques. In fact, this could be my criminally ugly body on display. One upside to riding that path is that I subconsciously picked up the pace. Was it anxiety about Joanna or the sight of aged naked men? I’ll never tell.

I crossed the bridge, rode back up into camp and as I entered there was Joanna coming out of the reception office, both of us very relieved to see the other. We relaxed some in camp, sharing a beer while working on the slow internet, then cleaned up and made our way back into town to check out the Haus Musik at 8:00 pm in order to take advantage of reduced night time pricing.

We walked from the Opera stop a couple of blocks to a combination wurst and noodle kiosk (go figure) and shared a curry wurst and box of Thai spiced noodles with chicken. If one were to look up the definition of ill mannered in the dictionary, a picture of the staff at the kiosk would be all one would need to understand the meaning of the word. But the food was filling and reasonably priced and sent us on our way to the museum. 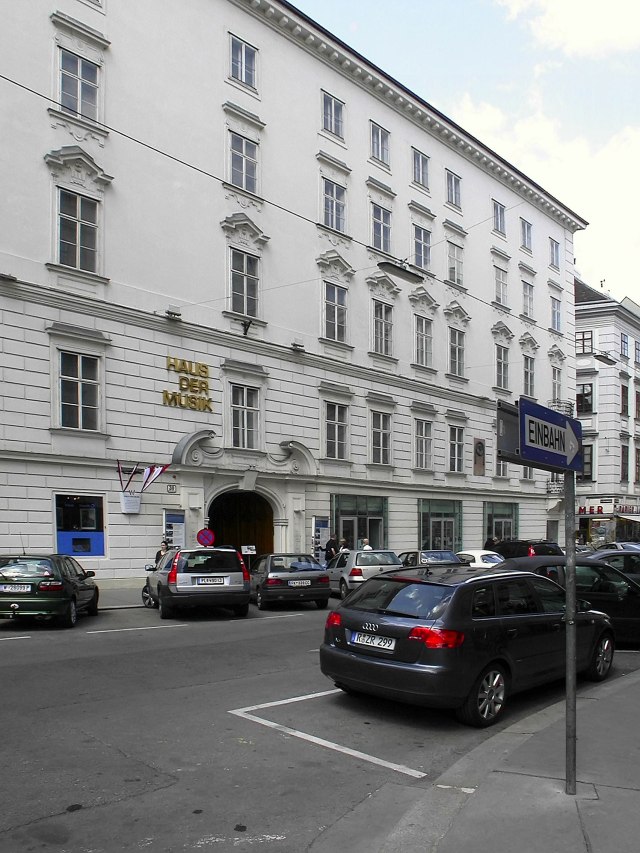 The Haus Musik is a block or two away from the kiosk and we waited a few minutes at the entrance, along with some others, for the bewitching hour of 8:00pm to begin our tour. I won’t go into the place in detail, but it is essentially split into two halves. One is a hands-on interactive section that teaches you about the science of sound; what it is, how we hear it, how our brains interpret it. The second half studies of the lives of Vienna’s great composers (Haydn, Mozart, Beethoven, Schubert, Strauss, and Mahler), with a room devoted each.

This is a fascinating place, one that the two hours we’d allocated to it were insufficient to really appreciate what it had to offer. Plus I was a bit tired from the days ride and a few of the exhibits had technical problems, adding a bit of frustration to the experience. But I’d return again someday, pay the full price and spend 4-5 hours perusing the offerings; it was that complete and informative.

On the way back to the camp we stopped for some gelato, tasty and satisfying after a long day of riding and sightseeing. When we got onto the subway at the Opera it was crowded as we soon realized it was traffic for the soccer game that night, with our metro line being the one that serviced the stadium. It was loud and crazy busy, fans jamming the station platforms, many drinking beer, most wearing the colors of the local team.

We had to wait for three trains to go through before we could find one with room for us to board. It was trying and yet strangely exhilarating to be in the midst of so much excitement and energy. It reminded us of home, and the fun we have with the friends there and how those times to come will be there when we get finish our journey. But that is still some way off and for now we returned to camp, ready to fall asleep in our home away from home, a good night’s rest ahead.

Joanna on the Trail