Monday would be a full day with our planned drive a couple of hours into the Bavarian Alps to take in both Hohenschwangau and Neuschwanstein before checking in to our hotel, the Zum Hecten in Fussen. Our departure in the morning was a little complicated as Marty needed to pick up a rental car nearby, which turned out to take longer than expected. But it gave Kim and I time to walk over to the Rewe market nearby and pick up supplies for a picnic lunch.

We hit the road a little later than anticipated but made good time driving south. A little more than halfway there I realized we were driving through the small village of Rottenbuch, where Joanna and I had spent the night with Irene and Ric Johnson in 2002 and had our funny experience with the reluctant innkeeper there.

From here, I let our favorite guest poster give her interpretation of our day at the castles:

Sitting in the little red rental car (a cute Volvo 40 Series Coupe) with the Mitchell’s I woke from my nap to the sounds of “oohs” and “aaahs” as we approached Fussen and from afar the Castle Neuschwanstein. As we drove further into the town a smaller but no less pretty orange castle came into view. We entered into the tiny town of Hohenschwangau, parked, and had a tailgate picnic lunch of meats, cheeses, mango curry sauce, tomato and bread. A few Augustiner’s leftover from the case in Munich just topped up our tanks and we were ready for the castles. 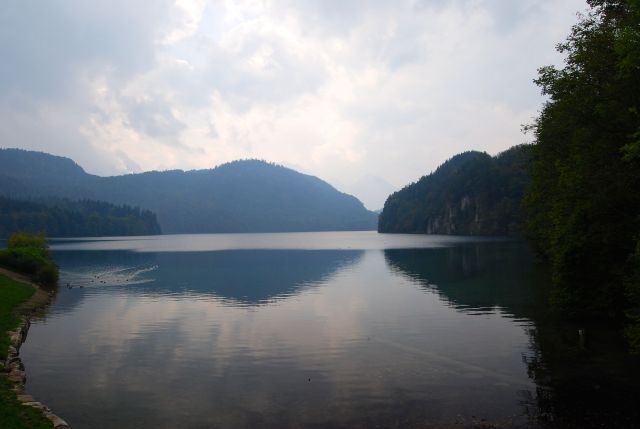 My mom and Kim went to buy tickets for both castles and while they were gone we located the bathrooms and took some touristy photos near the lake. Our first tour was of the smaller castle (Hohenschwangau) at 3:20pm. This was the summer home of King Maximilian, his brother (Luitpold), his wife, and their two sons (Ludwig and Otto). We learned all about the history from our tour guide; a woman with the strangest accent I have ever heard. Part Australian, part German, part yelling, it was an adventure. 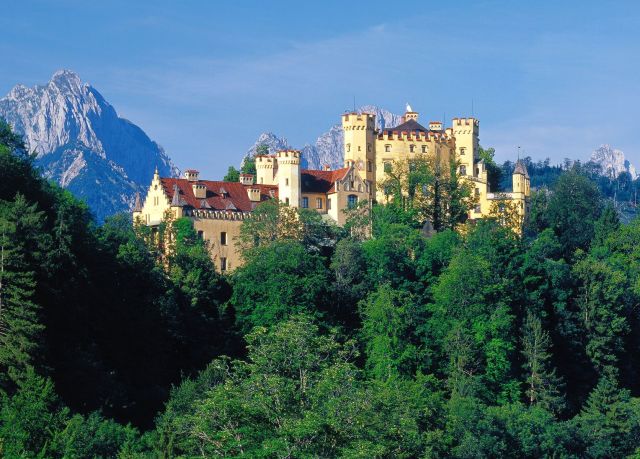 We were informed that everything was still original to the castle and had never been refinished or re-painted so when a young woman asked if it was possible that the colors of the wall paintings had possibly faded over the years, the aggressive response yelled back was a resounding “NO, THEY ARE ONLY 200 YEARS OLD!!” The poor woman who asked the question looked like she may have just crapped her pants.

In another room there was a gift of bread & salt from another country, possibly Prussia, which our guide told us was the original bread brought over from the visiting dignitaries. When the question arose as to why it hadn’t molded over the years we were yell-informed “BECAUSE THE BREAD IS DRY! THERE IS NO WATER IN IT!” Thanks? I guess?

Walking down the hill towards the car and trolley for our next tour we found ourselves on a serene tree lined path, a horse and carriage came trotting up and I snapped a picture, sending the driver into a mad rage apparently. The man tried to run us off the road while yelling something in German, which I can only assume was translated as “oh, you look so nice, thanks for taking my picture, prepare to die!” 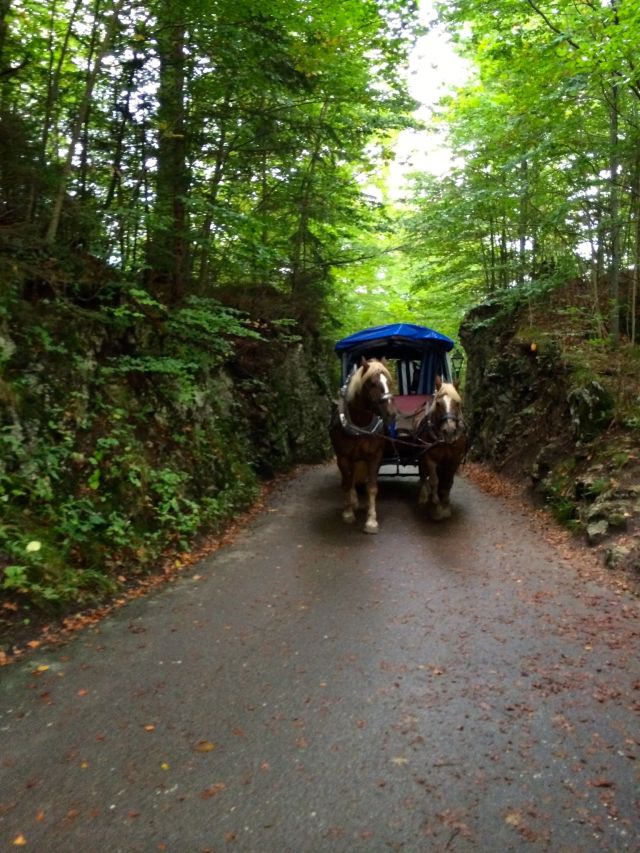 Horses on the Loose

When Ludwig became king after his father died, he decided that the family castle wasn’t grand enough for him and so his first project as king began. Neuschwanstein, to be his greatest accomplishment, was never completed, although he did build 2 other castles in his short lifetime elsewhere in Germany. Our second tour began at 5:20, we arrived just in time after taking a trolley up the hill at breakneck speeds around tight corners with a drizzle. Marty, Kris and I walked up a little path to see the Maria Bridge and the stunning view of the imposing Cinderella-esque castle with the mountains in the background.

Further walking took us around the base of the castle and into a courtyard where our damp tickets caused a holdup in the ticket reading machines. Our tour guide this time, Tim, began the tour and in German fashion was both swift and informative. In 40 minutes total we covered 3 floors and 20 years within castle walls. On the first floor were the very modern servants quarters, very spacious for the time with two beds in each room. The 2nd floor was never completed and now contains the gift shops and bathrooms.

The 3rd floor was the most expansive, housing the kings personal rooms, his throne room (which never held a throne incidentally as he died without ever living in the castle), a room entirely created to be a cave scene from one of his favorite Wagner operas, and a little personal alcove with his religious goodies. Ludwig was possibly definitely insane and had decorated the entire castle with the operatic works and sagas of Wagner. It is said that he cried the day Wagner married his wife.

The 4th floor is a giant, magnificent, majestic, beautiful pine paneled music room that is now used once a year but was never by King Ludwig as he died 2 weeks after it’s completion. He was found dead on a lake one day after he was privately announced unfit to rule. This meant his brother Otto became the king and stopped all construction on his brothers many projects. So to this day, Neuschwanstein remains incomplete. 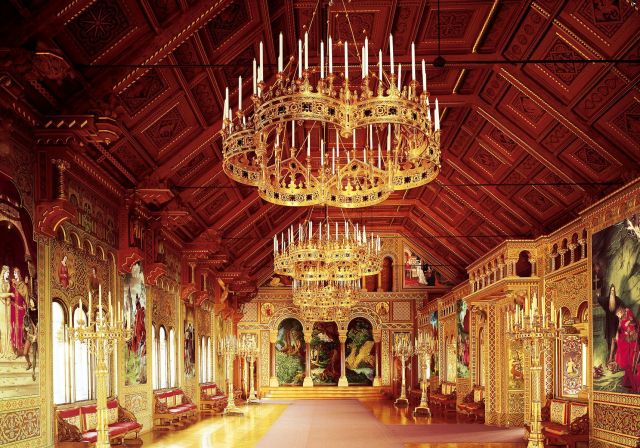 We trolleyed down the hill and drove into nearby Fussen proper for the evening where we had some trouble finding the hotel and parking. Settled in though, the dad’s were a little cranky from the stressful events prior and Kris and I took it upon our selves to locate food for everyone. Luckily the hotel restaurant was able to seat all 6 of us immediately! After a bowl of delicious cheese soup, everyone was smiling again and we had a long and memorable meal of many cheese sauce covered dishes.

As Jessica mentions, the dinner was indeed a delight, Kim’s cheese soup being one of the best things I’ve eaten in a long while. It had been a long day after a long weekend and I excused myself before desert to retire early and rest up in anticipation of more excitement to come as we prepared to enter Switzerland, the land of cheese, chocolate and the Alps.

The Group, Ready to Take on the Castles