With a relatively short and easy drive ahead of us to Lucerne Tuesday morning, we decided to spend a couple of hours walking around Fussen, a charming little town in and of itself. 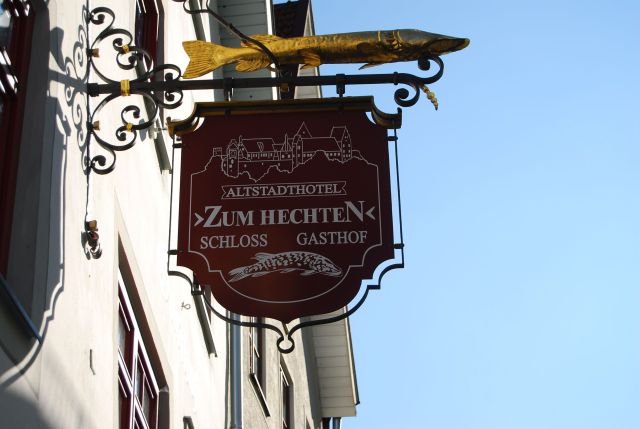 After a very good buffet breakfast at the Zum Hechten, we made our way out into the streets for a leisurely stroll, window-shopping, stopping now and then to engage in small pockets of conversation.

After an hour or so we landed at a chocolate shop for refueling, hot chocolate style.

After the gray, overcast and rainy skies of the day before we were treated to a gorgeous morning and so elected to sit outside, Marty engaging the women at the next table in an exchange that proved that new friends are where you find them. We finished up our snack, made our way back to the cars and drove the two hours necessary to arrive at the Ibis Luzern Kriens. 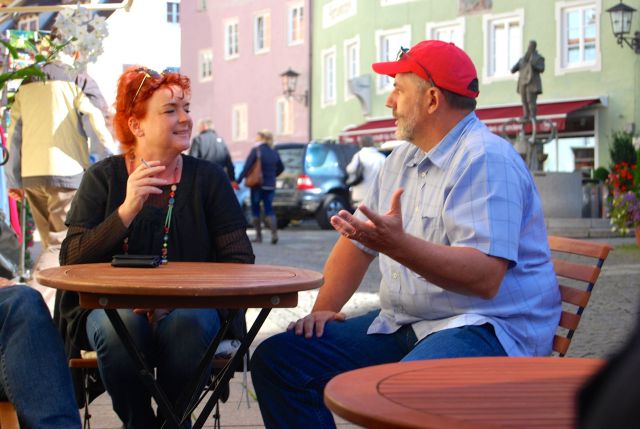 Located in a suburb just outside the city center, it made for a good jumping off point for a couple of nights of sightseeing. We settled into our rooms, shared a beer or two from our dwindling supply of Augustiner’s and then walked a quarter mile or so to the metro station for a quick trip into the main train terminal.

Our first stop was the well-known Chapel Bridge (Kapellbrücke); in the first half of the 14th century this bridge with its octagonal stone Water Tower (Wasserturm) was built at an angle, to connect the town’s medieval fortifications. In the 17th century it was decorated with paintings depicting the development of the town, but in 1993 a leisure boat moored under the bridge caught fire, and many of the paintings were damaged beyond repair. The bridge was rebuilt and restorations of the damaged art pieces now can be seen as you cross the river. 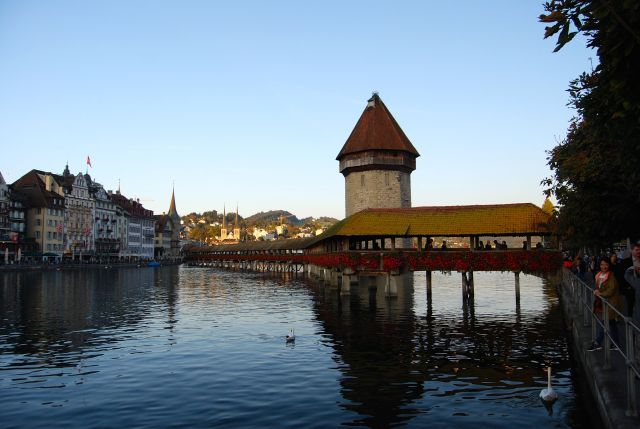 Tower and Bridge at Sunset

As it was getting late in the day we set off to find some dinner, using the Steve’s guide as our source. Thus ensued our first big shock of the trip; discovering just how expensive Switzerland can be, particularly in a resort town like Lucerne. As we roamed the streets viewing menus where a simple pizza ran 25 Euros, we were a bit dismayed. Eventually we settled on a fast, healthy casual concept specializing in chicken dishes. We split a couple of sandwiches and two bowls of nicely done Asian inspired noodle bowls, essentially a nicer version of a Lean Cuisine offering and each only ran about 16 Euros. Sixteen Euros apiece.

We repaired to the Ibis and finished out the evening with a few more beers, raiding the remnants of our food stores in the action packers we’d brought up from the car. The next morning Joanna and Marty set out for a local market to pick up picnic supplies, more beer, and food for dinner in the room when we returned that evening. Another quick walk led us to the metro station for a return visit to town for the start of our walking tour of the rest of Lucerne.

Starting again at the Chapel Bridge, we set out up river to Jesuit Church (Jesuitenkirche), the first major Baroque church in Switzerland, built from 1666 to 1677 and dedicated to Francis Xavier, a co -founder of the Jesuit order. 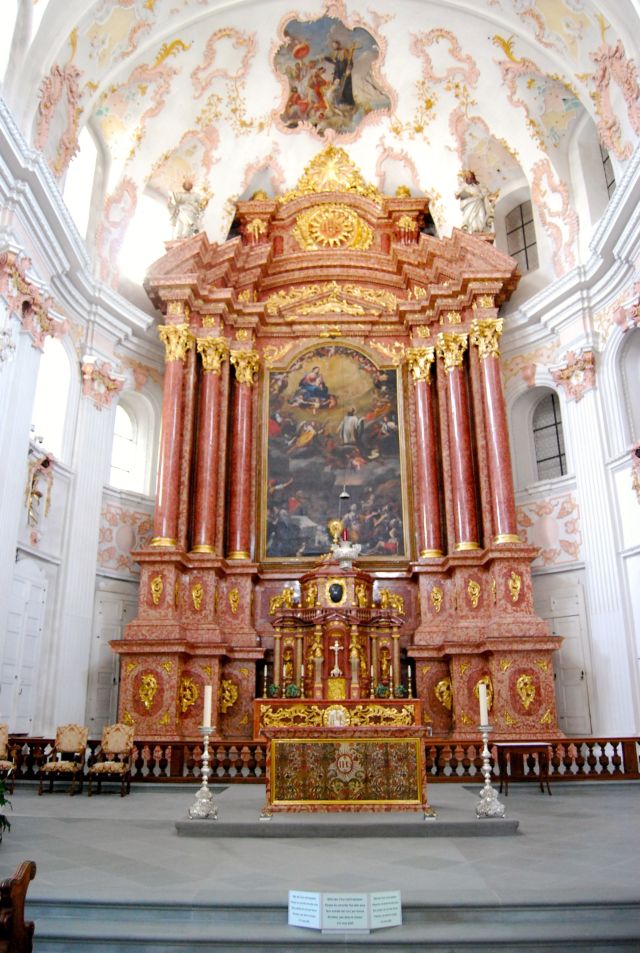 Just up the river from there is the Reuss River Weir System; the river drains out of the lake here on its way to the Rhine and Luzern is responsible for controlling the flow of water and preventing the flooding of lakeside villages by maintaining the lake level.

In the mid-19th century, the city devised and built a simple yet ingenious extendable dam (Nadelwehr or spiked weir). When the water is highest (in the spring), they remove spikes to open the flow; as the summer wears on and the water level drops, they gradually broaden the dam to keep the flow steady. In the winter, they close the dam entirely to keep the lake level high enough.

We crossed back over the river on the Mill Bridge (Spreuerbrück). The “Spreu” in the bridge’s name means chaff, which was separated from the wheat at any of the ten mills that used to sit here. Leaving the bridge we entered what is considered to be Lucerne’s old town, walking through Mühlenplatz, the Weinmarkt, and the Hirschenplatz. Our walk ended at the river where we stopped to partake of our picnic lunch, more meat and cheese sandwiches laced with that delicious Heinz mango/curry sauce we’d gotten everyone hooked on. 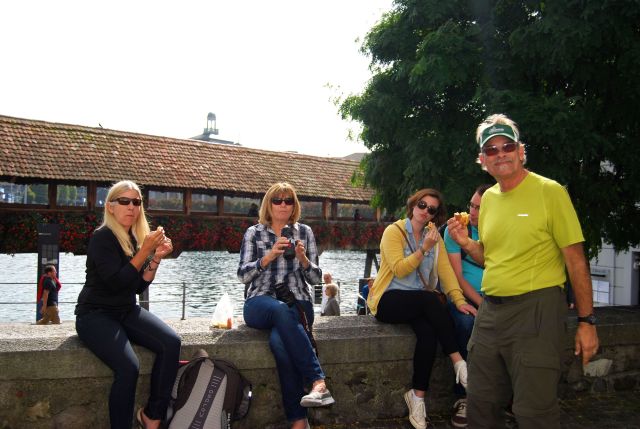 Picnic by the River

From the start of her planning for the trip, Jessica had wanted to take a pedal boat out on the lake and after some quick research, we determined it was feasible, and reasonably priced, but only for five of us, the capacity of the little boats. Marty volunteered to take one for the team and stay behind at the wine bar conveniently located at the little plaza where we’d stopped for our lunch. He’s that kind of stand up guy. 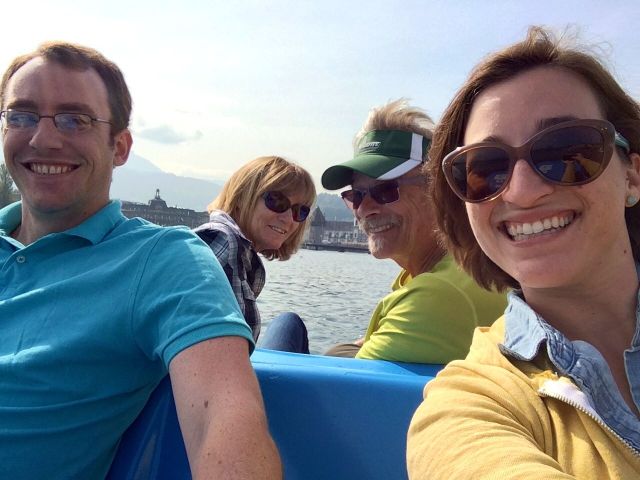 Out on the Lake

The five of us (Jessica, Joanna, Kim, Kris, and myself) hit the water and thoroughly enjoyed our hour out on the water, Jessica and Kris performing yeoman’s duty paddling us out and back; a serene float on an amazing day. We returned to the docks, located Marty holed up at the wine shack and joined him for a bottle of red, a fine and fitting way to incentivize the last part of our day in town.

We left the river and walked up hill to a remaining section of the original walls that surrounded the city, climbing up a couple of the towers. We retraced our steps and took off for the Lion Monument (Löwendenkmal). This large sculpture (33 feet long by 20 feet tall) is carved right into a cliff face, over a reflecting pool in a peaceful park. It represents the Swiss mercenaries who were killed or executed defending the French king in the French Revolution.

This is a beautiful thing, this sculpture but at a basic level, I found it interesting that it honors a bunch of hired mercenaries whose responsibility it was to protect a overbearing tyrant whose people deposed him in a revolution that brought liberty to the French masses. Just saying.  We wound back down to the river, stopping at the main cathedral, St. Peter’s, for a final look before winding our way back to camp.

We returned to the Ibis determined to do some relaxing. We enjoyed our picnic dinner in the room, consuming more beers, wine, and some local schnapps type liquor I’d procured, wrapped up in the conversations that flow amongst friends and family, some of the best times you can share. Partway through the evening, while checking mail I received a note from Lisa Neddam, Francois’ daughter who we’d planned to stay with the following days in Geneva. Her fiancé Adrien had suffered a mishap and the timing was bad the next day. Could we postpone our arrival by a day?

As we’d planned to make a stop in Gruyere for a cheese tour, why not see if we could stay in that area? Some quick web work and reward points netted us three rooms at the Best Western in Bulle. We’d set out the next day with that location in the GPS. What new adventures would await us?