With just one day to see the area surrounding the Amalfi Coast, we opted to follow the recommendation of the Steve’s guide and use the bus and ferries to ride up and down the coast between Sorrento and Amalfi. We left camp mid morning and walked a mile or so to Sorrento’s train station where we purchased a one day pass for 8 Euros apiece and waited in line for 30 minutes or so for the hourly bus.

Start of Trek to Train Station

While we were waiting Nicole ran down the block to a café and returned with three steaming cappuccino’s and a couple of filled croissants. The Italian approach to a chocolate croissant is different than the French; the former injects a healthy portion of a pudding like filling while the latter generally buries a smaller, more solid piece of chocolate. We prefer the French approach, but you can’t go wrong with either style.

We were glad that we’d arrived early and had a good spot in line because when the bus arrived, there were more people waiting than available seats which meant that some folks were going to stand for the nearly hour long ride to Positano. We were fortunate to grab the last couple of window seats on the right side of the bus, as we’d be heading south and those would be the best for a view of the coastline. 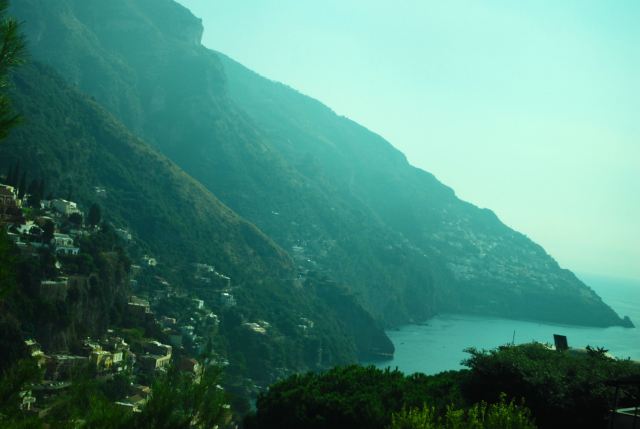 View from the Bus (distorted by the window)

On the way down we decided the best strategy would be to ride all the way to Amalfi, particularly as we had good seats, and then work our way back up the coast with a stop in Positano, taking the ferry as we had done in the Cinque Terre. Disembarking in Amalfi, we scoped out the harbor front and ferry schedule to determine the best time to ride up the coast, giving us a couple of hours to explore the town.

We took a quick look at Piazza Duomo and the main street that leads from it and then began a steep walk beginning near the steps of the Amalfi Cathedral for a journey up the hillside to the Cemetery, hoping to get a good view of the town. This climb takes you through the narrow side streets and lanes; a journey folks that live there must take every day as we passed the doors of numerous residences.

Climbing up to the Cemetery

Topping out at the doors of the Cemetery, we took some pictures and returned to Via Lorenzo d’Amalfi, the main drag of Amalfi town, a shoppers paradise with stores featuring wine, local foods, crafts, and your typical tourist merchandise (t-shirts, magnets, etc.) We found a small shop carrying locally sourced pottery and bought a few items for ourselves and others and then, with some time to kill before the ferry left, grabbed a couple of small stuffed pastries, one with a dynamite combination of spinach and cheese and a couple of big cold Peroni’s, consuming it all contentedly while sitting on the steps leading up to the Cathedral.

At the appointed time we boarded the ferry for the pleasant 30-minute cruise to Positano. It was a gorgeous day, warm comfortable temperatures and clear blue skies, perfect conditions for an outing at sea.

We docked in Positano and starting at Piazzetta, the gathering spot for local local boys to hustle tourist girls into the nearby nightclub in the evening, walked uphill to the Church of Santa Maria Assunta. We would have spent some time inside but they were setting up for a wedding, as was evidenced by a number of ladies waiting outside the church, dressed up for the special occasion.

We continued the uphill walk passing by shops and restaurants until we reached Piazza dei Mulini, the upper-town meeting point and as close to the beach as a vehicle can get. It’s the lower stop for the shuttle bus that provides service to the top of town where we’d meet the bus back to Sorrento, but we opted to continue walking. Before we set out though a limousine pulled up with the bride and her party, who climbed out and prepared to make the ceremonial walk down to the church. It was a nice moment to witness, especially in such a special setting.

From here it was a long and unrelenting walk uphill to the bus stop. I maintained a steady pace, breathing easily as my body responded well to the demand placed on it. I’m going to pause here and remark on this element of the trip, one that had worried me to no end prior to our departure, that is, how would my back and knee react to the amount of walking and standing we’d need to do in order to be successful tourists.

As it turned out, a couple of different factors worked in my favor, the first being the new stretching routine I’d received from Chris Dollar at Carolina Ortho and the second being the benefits derived from no longer sitting inactive at a desk looking at a computer for most of the day. By now Joanna and I were easily walking three to five miles per day, I’d lost some weight and the combination of these meant that except for a few periods of discomfort each day, I could pretty much hike as much and as far as I needed to. The exception being those deadening zombie walkthroughs of crowded museums.

We finally reached the top of the climb and with a moderate wait for the bus, I’d acquired a large bottle of Moretti beer and quickly consumed it, the cold brew an antidote for much of what ails you. The bus arrived; we climbed on board, fortunately getting seats, and were entertained almost the entire way back to Sorrento by a pair of adorable British kids who were moving to Australia with their parents. 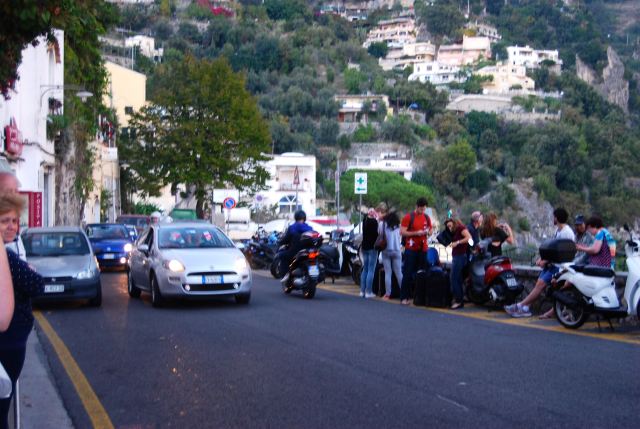 Waiting for the Bus

Arriving later in Sorrento, we made a stop in town for dinner, enjoying a simple satisfying, but unmemorable meal. We finished walking back to camp and spent the rest of the evening working on computers in the reception area, a chore made all the more pleasant by the generous pours of Courvoisier VS they were serving for a paltry 4 Euros per glass.

Our stay at the Amalfi Coast had been a good one, an area reminiscent of the Cinque Terre, yet different in its own way. We’d leave the next morning with a long drive up to Florence, knowing our trip was drawing to a close and thankful we’d had one more chance to set up camp in nice campground that had saved us from a potential disaster. We’d long remember our stay in Sorrento. 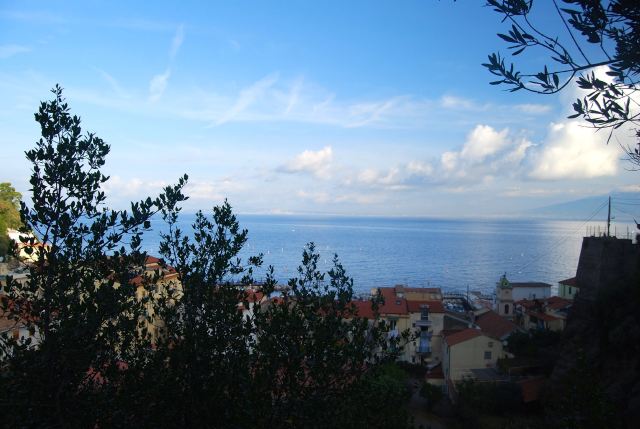