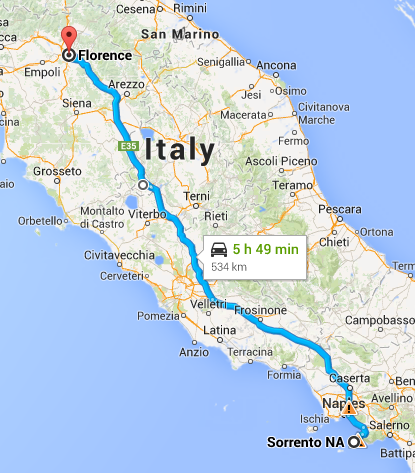 The drive up to Florence took about six hours, but was manageable, as we’d made a reservation at Hotel Anna’s in the center of town, not far from the Basilica of San Lorenzo and the Duomo. That being said, once we arrived, the GPS wanted to send us down what appeared to be a dead-end street so I parked at Piazza dell’Unità italiana (miraculously, a parking space opened up just as we pulled in) and walked the four long blocks or so to the hotel. 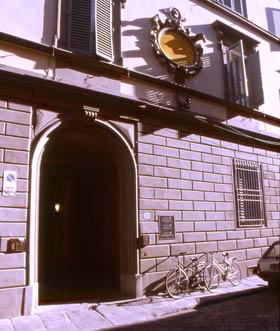 As I was checking in I was pleasantly surprised to find that our fee for parking the car included pickup at the hotel (as there was no parking close by) meaning that we didn’t have to take the bikes off. I walked back to the car, drove to the hotel, parked and we unloaded our bags, glad to be safely settled. 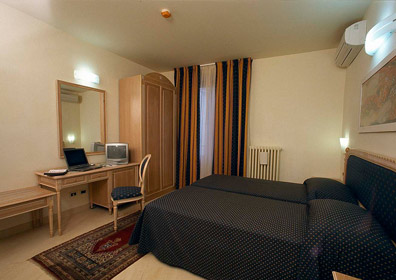 We relaxed in the room for a bit before heading out to dinner to a Steve’s recommendation within walking distance, the Trattoria al Trebbio. We specifically wanted to try the regional specialty, Bistecca Fiorentia, as described here in Wikipedia:

Bistecca alla fiorentina, or ‘beefsteak Florentine style’, consists of a T-bone traditionally sourced from either the Chianina or Maremmana breeds of cattle. A favorite of Tuscan cuisine, the steak is grilled over a wood or charcoal fire, seasoned with salt, sometimes with black pepper, and olive oil, applied immediately after the meat is retired from the heat. Thickly cut and very large, “Bistecca” are often shared between two or more persons, and traditionally served very rare, sometimes garnished with lemon wedges, if not accompanied by red wine, and accompanied by Tuscan beans as a side dish.[5] An early recipe dictates: 1/1,5 kg, 3 fingers thick, 3-5 minutes grilling per side (flipping it only once) and 5-7 minutes vertically standing on its bone so as to make the blood drain out. 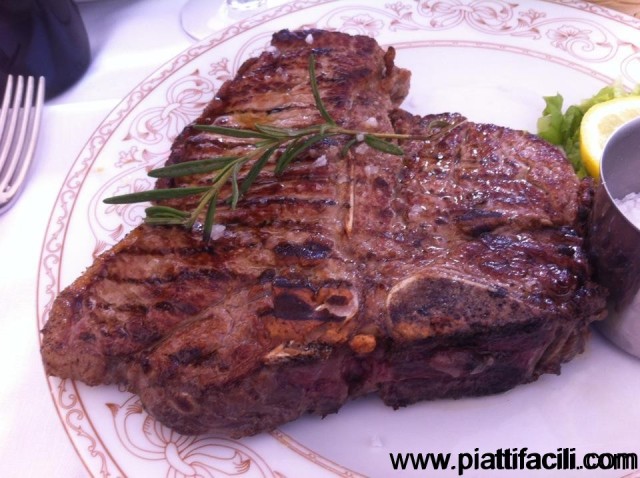 It was delicious and accompanied by a bottle of house red and roasted potatoes, a perfect introduction to eating in Florence. As had been our plan from the beginning, trying to eat well was a goal for us in Italy. This would be my fourth visit to Florence, having spent nearly a month here in my three prior visits. But those trips were all in the 1970’s and 80’s when I was traveling on a restricted budget and eating even a slice of pizza was deemed a luxury. 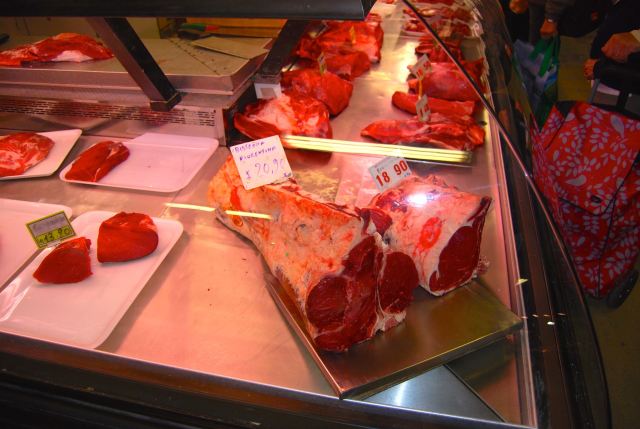 The next day was devoted to a walking tour of Florence to give Nicole an overview of the city. We started at the il Mercato Centrale, Florence’s large iron-and-glass-covered central market. Full of an assortment of butcher, cheese, coffee, wine, and dessert shops, one wanders around wondering how some of the stalls stay in business, there is that much merchandise. 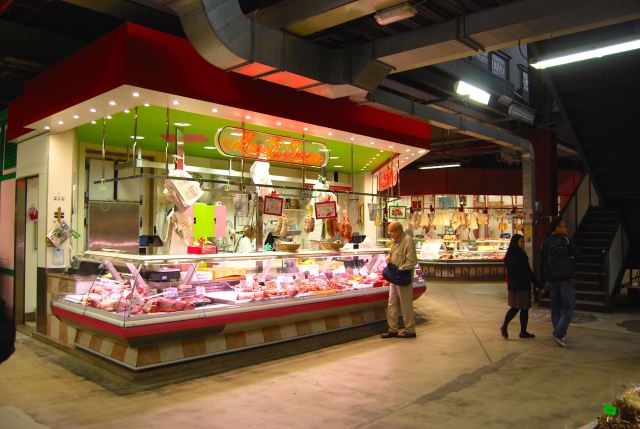 We made a brief stop near the Basilica of San Lorenzo so that I could re-visit a spot I used many times during my 1979 two week stay in Florence. That visit occurred in July, a hot month in Italy and mid afternoons were best spent resting somewhere in the shade. This was my place, just steps from the market that used to fill the square surrounding the Basilica (now increased in size and moved to the adjoining streets), tall building walls on either side of the street providing a deep shadow, bringing with it a coolness enhanced by the liter bottle of flavored carbonated water I’d buy from one of the stalls. 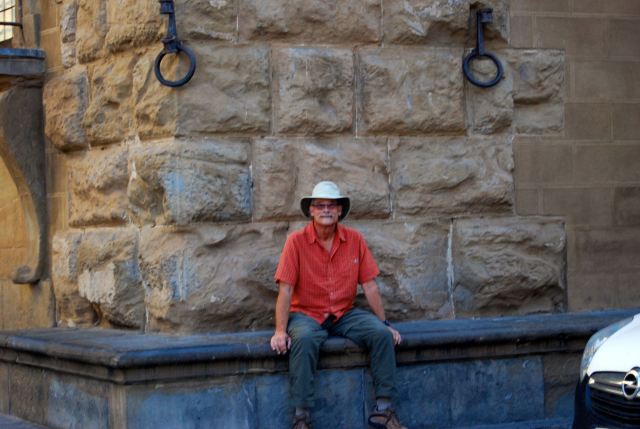 Sitting at My Spot

Next up was the famous Duomo, built between 1296 and 1436 with the third-longest nave in Christendom. The cathedral’s claim to fame is Brunelleschi’s magnificent dome— the first Renaissance dome and the model for others to follow. 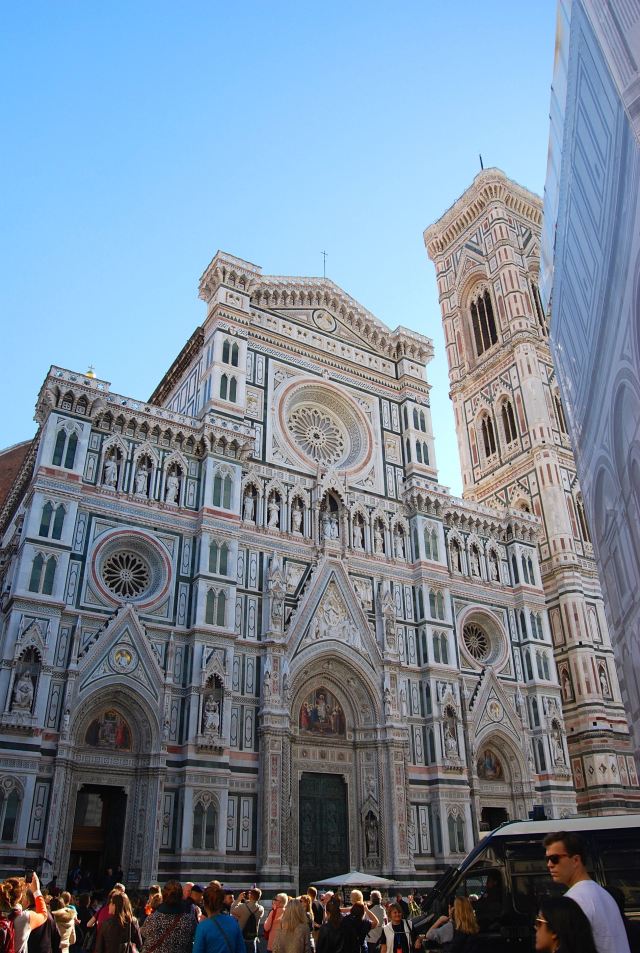 We opted not to climb the dome, or to the top of the Campanile (Giotto’s Tower) next-door, instead spending our time in the cathedral itself, admiring its large dimensions (small though compared to St. Peters) and the light as it filtered in through the windows. 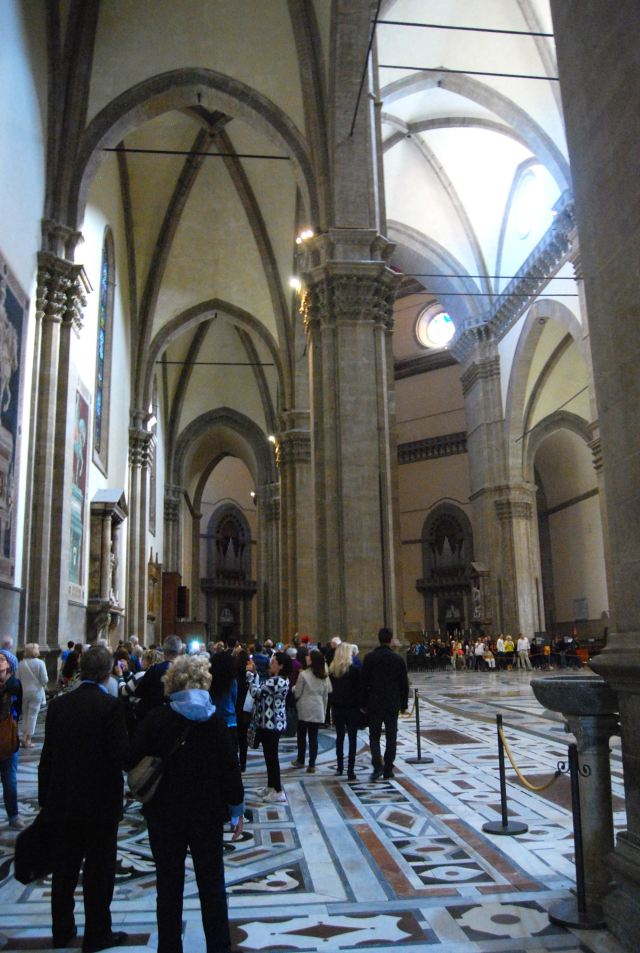 After grabbing a mid-day snack of pizza and beer at a near-by shop, I took my leave of Joanna and Nicole and spent the rest of the afternoon reconnecting with the many places, and memories, that speak of Florence to me. My first stop was the Piazza della Signoria, home to the Palazzo Vecchio, the Loggia dei Lanzi and the gateway to the Uffizi Gallery. 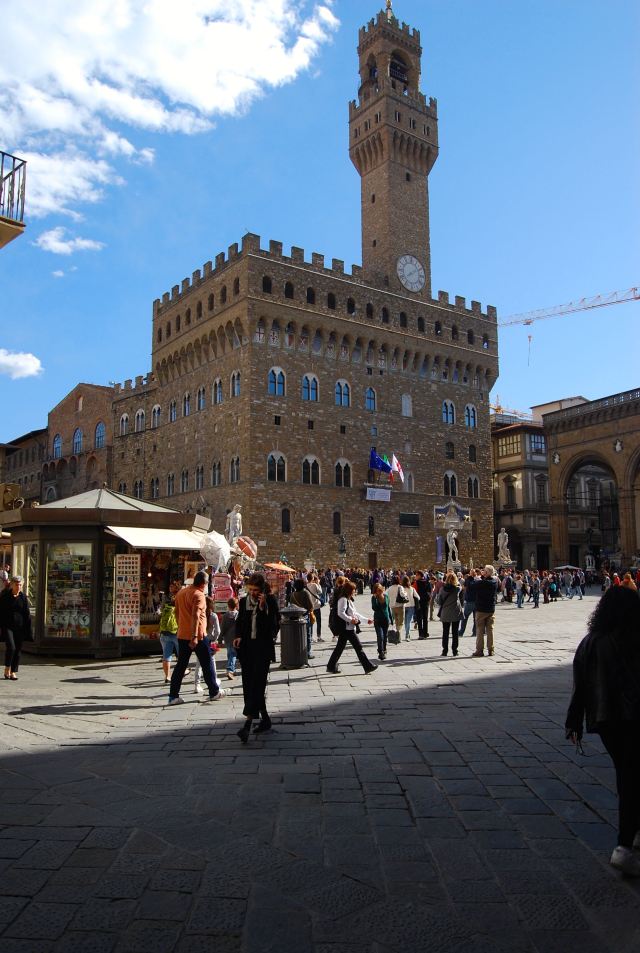 I vividly recall an afternoon here in 1977, a temporary soccer field constructed in the Piazza, ringed by metal bleachers. I fell in with a group sharing bottles of wine and large joints filled with hashish and tobacco, a common way of smoking at the time.

The afternoon wore on and needless to say, by early evening I became quite intoxicated; so much so it took two of my newfound friends some amount of effort to guide me back to my pension. I remember that long walk back, supported by those two fellows I’d never see again, an uncommon act of kindness for a stranger. I passed out on my rented bed and slept until the next morning, waking up with a ferocious hangover, a signal that my days in Florence that trip were drawing to a close and it would be time soon to head south to Rome. 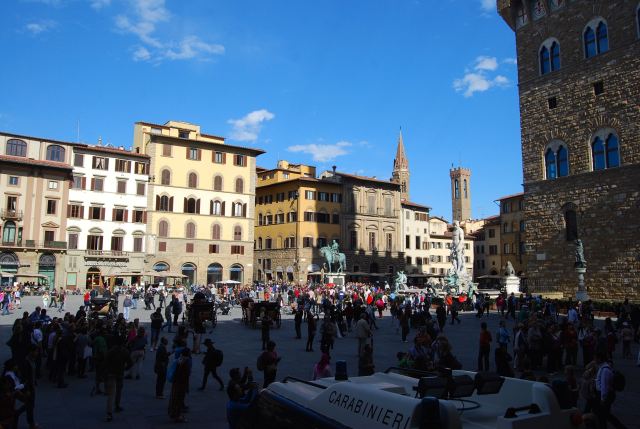 I walked to the Arno River and crossed over it using the famous Ponte Vecchio bridge now filled with jewelry shops that support the Corridoio Vasariano, the enclosed passageway built in 1565 for the Medici’s to use when crossing from the Palazzo Vecchio to Palazzo Pitti so that they would not have to come into contact with the subjects they ruled. 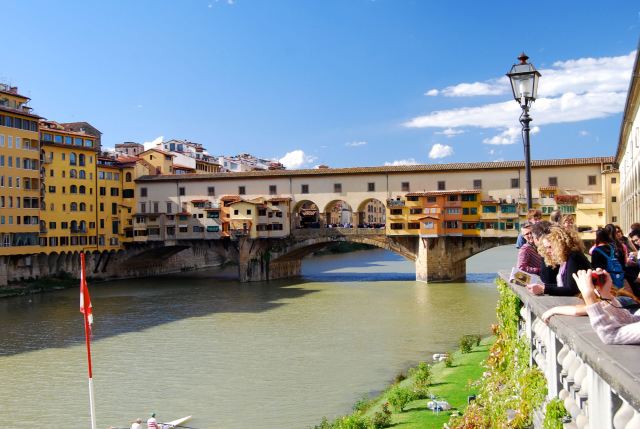 My destination was up the hill, the Piazzale Michelangelo, its famous copy of the statue of David, and its staggering view of Florence across the river. 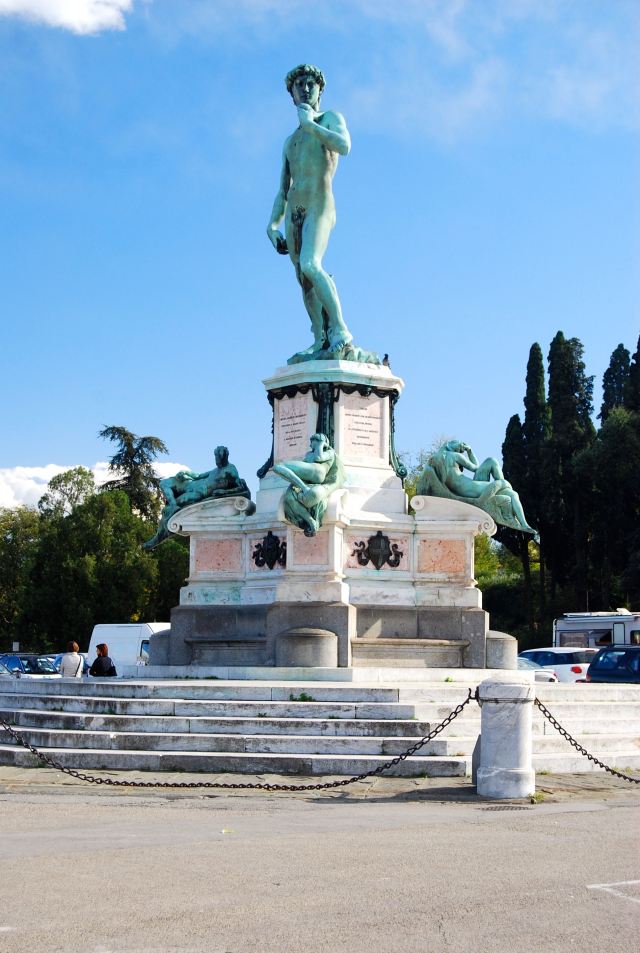 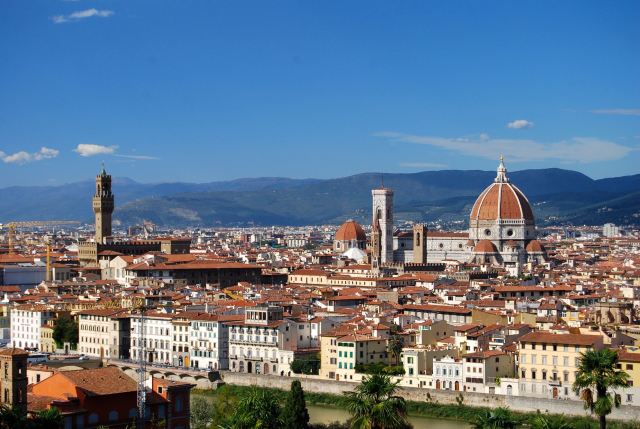 I then walked a block or so down the hill to the gates of Camping Michelangelo, my home away from home for a one night in 1977, two weeks in 1979, and three nights in 1984 with Joanna, Heike, and Francois. We had planned on staying there this time as well, either camping or in one of their bungalows as it is now operated by the same folks as Camping Village Roma. About two weeks out though the web site indicated they were closed and so we quickly made our reservation at Hotel Anna’s instead. 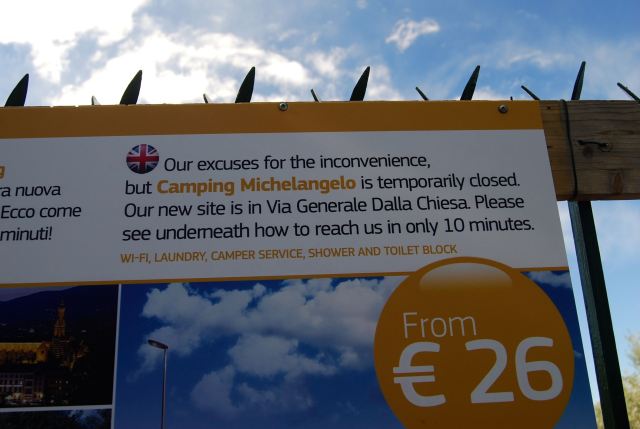 I’d hoped to be able to relive the pleasant memories I had of sitting on the covered patio there, drinking cold Peroni’s and eating potato chips with Francois, or listening with Rendy to All Along the Watchtower by Jim Hendrix multiple times from the old juke box, but such was not to be. Sometimes you can’t go back, and so it is best to go forward. 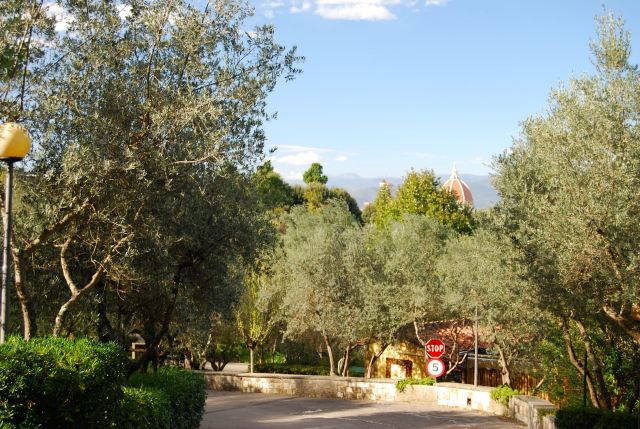 I walked down hill to the river, crossed over and made my way back to Anna’s. 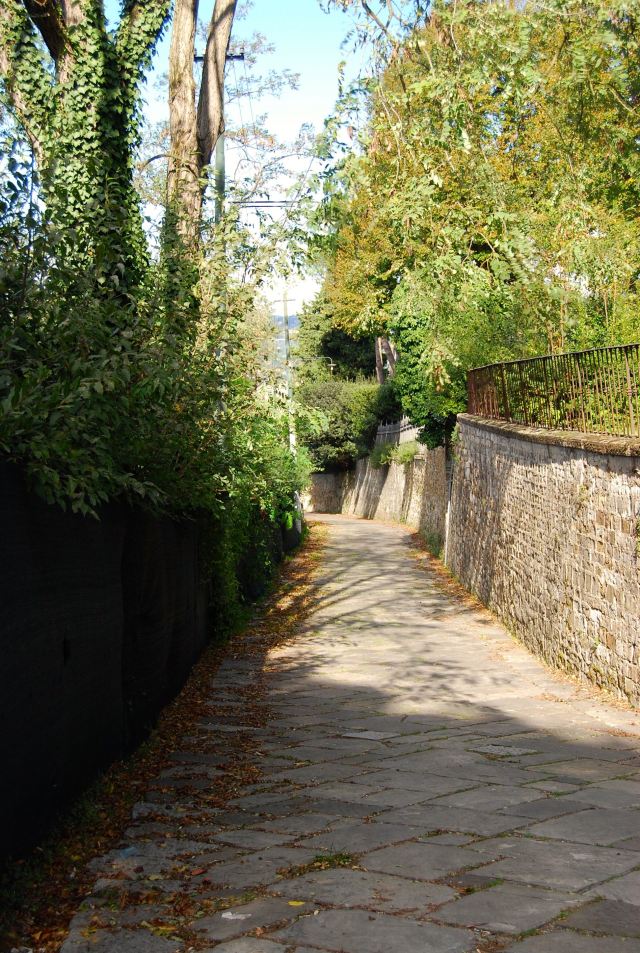 The Path to the River

The girls joined me soon thereafter and an hour or so later we ventured a few blocks down Via Faenza to a craft beer bar we’d spotted earlier, Brew Dog, a chain headquartered in Scotland. We enjoyed a couple of finely brewed ales and shared a chili dog (we had thought we’d ordered nachos but they must have been lost in the translation) and although it wasn’t Italian food, it all tasted good at the time. 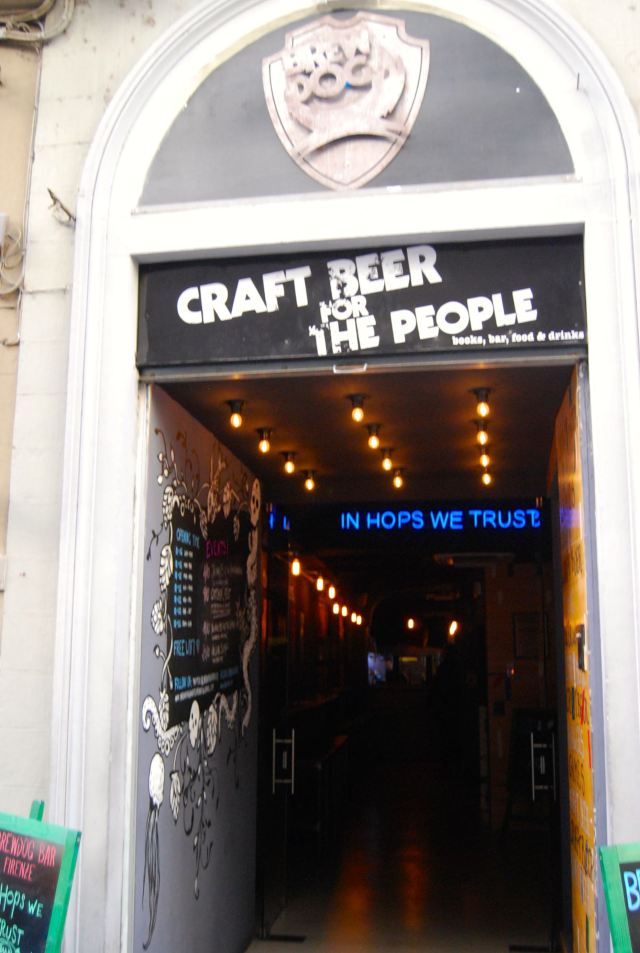 It had been a fine couple of nights in Florence and although we’d not been able to stay at Camping Michelangelo, I was glad we’d picked Hotel Anna’s for its central location, giving us the opportunity to provide Nicole with a true in the city experience. I’d been able to touch my past, walk through a few memorable chapters, and revisit a couple of ghosts. Knowing I’ll come back to Florence, I was ready to head up the road to Milano but was not sure I was so eager to begin our last week in Europe. How could the time have gone by so fast? 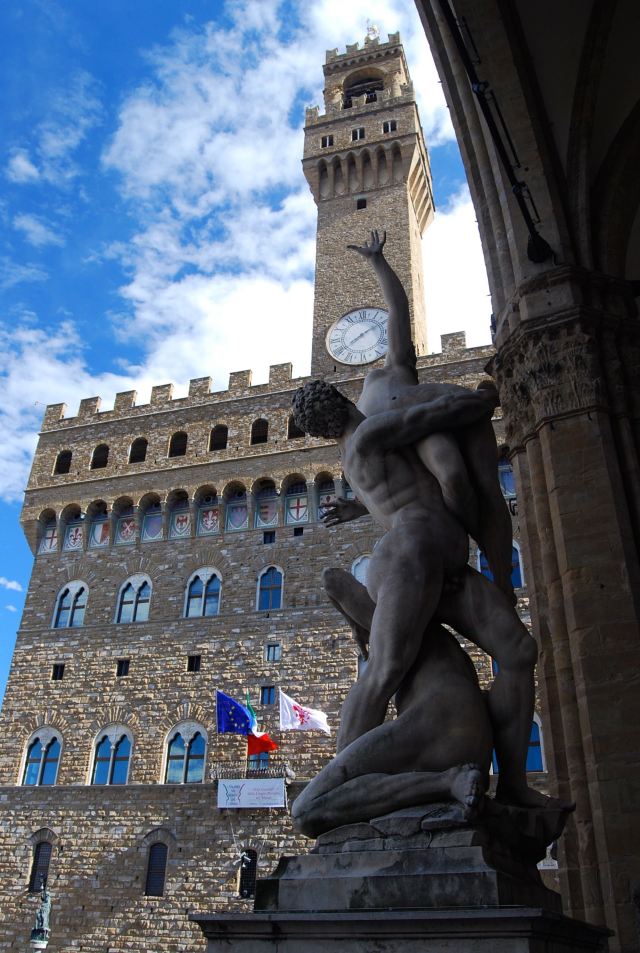