Europe 2014 – Milano – Our Last Night in Italy and the Last Supper, Literally

We left late morning for Milano with a three-hour drive ahead of us on toll roads. Starting just before the drive, and then throughout, I was in a foul mood, similar to those experienced from time to time throughout the trip. I think this one was brought on by the knowledge that we were closing it out, that the adventure would soon be over, and that we’d return home soon. Every trip, regardless of its duration has a moment like this, when you realize the vacation is over and the reality of your life at home stares you in the face. We just weren’t sure what that reality would soon hold for us

The drive into town went smoothly and we pulled up in front of the Hotel Florence, ready to check in for Nicole’s last night in Europe. This is an old style full service three star hotel (the number of stars refers to the type of facilities available; not to be taken as a quality reference) at 107 Euros per night for a triple.

Expensive for our budget and not a luxury property, but the friendly staff and cozy décor won us over. As a bonus, they had a private parking yard in the back where we could leave the car with the bikes on top.

Out Triple Room at the Hotel Florence

Nicole had a morning flight the next day and given the distance, and traffic conditions at that time, the hotel receptionist recommended that she take the 10 Euro shuttle from the train station to the airport instead of us driving her. As there was a chance that the public transportation systems would be on strike the next day the three of us set out to hike the mile or so to check out the route and how long it would take in case Nicole needed to walk (She was resolute about not taking a taxi).

We went a couple of blocks and stopped in at a tabac/bar to inquire about bus tickets. While inside, the clerk not being able to speak English that well, asked a customer to intercede. Thus ensued a twenty-minute interaction where this gentleman went out of his way to check on the strike for us, going to his apartment to make a phone call and then returning with an update. It was yet another example of the acts of kindness we’d experienced throughout our time in Europe.

Still not sure about the status of the strike, we made our way to the train station, Nicole confirmed shuttle details and it being early, around 5pm, decided to grab a bit to eat at the station as we were hungry and this being Italy, regular restaurants wouldn’t be open for dinner until 7:00 pm or after.

We ordered a sandwich (I had a mild and tasty chicken salad) and cold beer apiece, finished up our meal and headed back to the hotel. Nicole and Joanna stopped on the way back for Gelato and met me in the room later on where I labored away on the blog, drinking Limoncello. It’s hard work, but someone has to do it.

Up early the next morning we said our goodbyes to Nicole, who struck out for the train station prior to the start of breakfast (included with the room), a shame as it was a good one, with a large assortment of cereals, meats, cheeses, and other tasty treats. With St. Steve’s as our guide, we took off for the center of town, first stopping at the reception desk to get a restaurant recommendation for our last night in Italy. They had one within easy walking distance of the hotel and we would return there that night for a fine meal.

It was a pretty long walk down Milano’s main shopping street, Corso Buenos Aires, to get to the heart of town and our first destination, the Duomo. This cathedral, the fourth-largest church in Europe (after the Vatican’s, London’s, and Seville’s) and fifth largest in the world, is immense, with more than two thousand statues inside (and another thousand outside) and 52 one-hundred-foot-tall, sequoia-size pillars representing the weeks of the year and the liturgical calendar.

It was built to hold 40,000 worshippers, the entire population of Milan when construction began in 1386.  Starting out Gothic in design and finished in the early 1800s under Napoleon, it still has a uniformity of style that is pleasing to the eye.

We spent a little time at the Plaza del Duomo looking at the buildings that ring the square, then walked across the street and entered the Galleria Vittorio Emanuele II, a great iron-and-glass structure (part of the age of Eiffel) built during the 1870’s and the first building in town to have electric lighting.  Admiring the many shops and cafes, we stopped at a section of the tiled floor holding the city’s symbol: a torino (little bull). Legend has it that if you want good luck, you step onto the bull’s testicles and spin clockwise two times.

We exited the Galleria into the Piazza della Scala, which is dominated by a statue of Leonardo da Vinci. The statue (from 1870) is a reminder that Leonardo spent his best 20 years in Milan. Across the street is the famous La Scala Opera House. Not being big opera buffs and with the afternoon pressing on us, we passed up a tour and made our way to our next to the last stop of the day, the Sforza Castle (Castello Sforzesco).

Built in the late 1300s as a military fortress, it guarded the gate to the city wall and defended Milan from enemies. Later, the Sforza family made it their residence and built their Renaissance palace into the fortress.  This is a large complex and we toured but a fraction of it, taking in just the Museum of Ancient Art which is filled with medieval armor, furniture, early Lombard art, and Michelangelo’s unfinished Pietà Rondanini.

Our final stop for the day, having purchased tickets in advance, was the Last Supper. I’d seen this painting once before, in 1979 with Rendy and recall that access to it was casual, without any elaborate precautions. Then little attention was given to the preservation of the painting; we could walk right up to it. 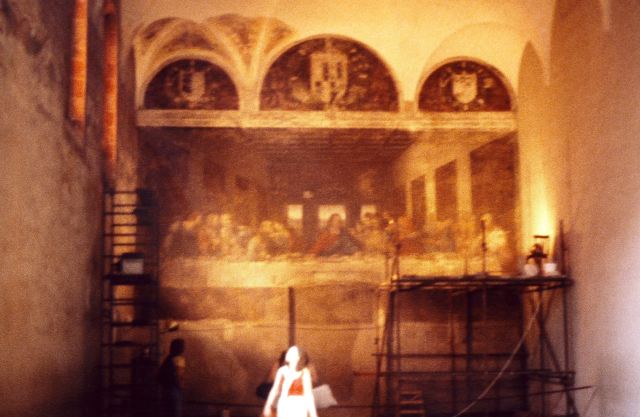 Starting in 1978 (you can see the scaffolding in this picture from the 1979 trip) through 1999 a major restoration took place that led to extensive precautions being put into place to preserve this fragile masterpiece. Viewing groups are now limited in size, have just 15 minutes to view the work, and must be accompanied by a guide. The former monastery-dining hall that is its home is now temperature and humidity controlled, requiring that visitors use two sets of doors at the entrance and exit.

If I Could Have Taken A Photo

Our guide did a very good job of getting to the heart of the pictures history, providing us with the background necessary to appreciate what a masterwork it is. The best part is when she had us move to the rear of the hall to take in da Vinci’s use of one point perspective, which involves all the lines in the painting converging in one place, known as the vanishing point. This strategy was used to emphasize the importance and central position of Christ.

Last Supper from End of Refectory

The transit strike over for the day, we hopped on the metro and rode back to the stop at Loreto, then walked the half mile or so to the hotel to relax a bit before dinner. At 7:00 pm we walked back near Loreto to Osteria Al Melograno, a small husband and wife operation, for our final meal in Italy. When we arrived we were the only ones to be seated and the wife/waitress seemed distracted and distant. This would change over the course of the evening as more folks dropped in to dine, many of them locals, and if you read the reviews posted to Trip Advisor, this seems to often be the case. One time visitors may not receive all-star service.

That being said, the food was very good. We split a starter of Tagliatelle Milanese that featured a creamy sauce with ham and mushrooms. I ordered the Milanese Cutlet, essentially a Wiener Schnitzel served plain on the plate; fortunately Joanna had their Osso Buco, delicious and hearty in the modern style with tomatoes, carrots, celery and onions and a large enough portion of Risotto Milanese accompanying it that we easily shared her serving.

We ordered a half-liter of the house wine, which was ample for our needs and enjoyed the meal thoroughly, a perfect ending to our month in Italy. The dessert offerings weren’t very tempting, so we opted to save the calories for a better fix somewhere down the line.

We walked back to the Hotel Florence full and happy, the reality of our last night in Italy dawning on us, the last week of our trip starting the next day. We’d be up early with a planned 7:00am departure, facing a nearly ten-hour drive to Francois’ place in Montigny. We were in that halfway place you get to on a trip of this length and magnitude; looking forward to seeing home again and yet, willing and ready to keep on exploring. It was a beautiful evening, one of many we’d shared during the last five plus months, ending a day like many we’d experienced, full of sights, sounds, good food, and rich cultural interaction. Sign me up for more.