We arose the next morning ready for another big breakfast and weren’t disappointed.  This is not fancy food, but it is good quality and there is plenty of it, something like eating at home if your Mom was a good cook.  We made our own sandwiches this time, packed up our day packs and prepared to take off down river towards Paradise Lodge, about 3 miles away which would give us 6 in total for the day.  The good news was that the aches and pains I’d felt the day before had pretty much disappeared and I wasn’t bothered by the normal stuff that much.

That being said, I’ve got an arthritic lower back and the right knee is a candidate for replacement, so they are always going to bother me, the back more than any other thing.  But you grit your teeth, stop a lot, stretch to relieve the tension down there and keep on moving.  This part of the river features steeper canyons and more rapids; if you were on a raft this would be the day you’d be looking forward to or dreading.

We loaded the car and checked out of Marial, then drove a mile or so to a parking lot at the trailhead for Paradise Lodge.  Today would be slightly different hiking from the day before, with sections of trail where the path is narrow and you are confronted with a steep wall on the right and a precipitous fall on the left should your attention wander.  It led to a number of morbid jokes about the half step up in basis Joanna or I would receive for the LA property should one of us perish.  Fortunately, it’s a rental now and we wouldn’t qualify, so we have a number of years of wedded bliss to look forward to. 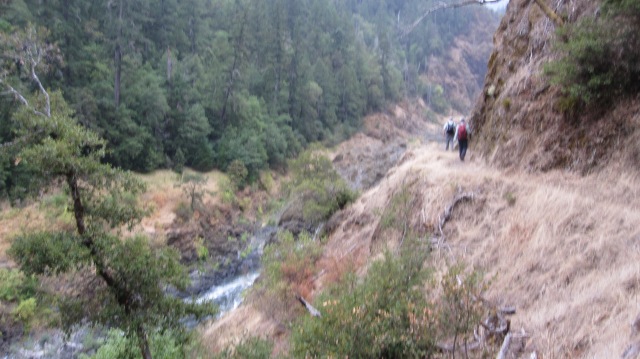 Along the way we passed a double waterfall tumbling into the river, then a large tree trunk suspended on top of a large rock, left there during the last high water event. 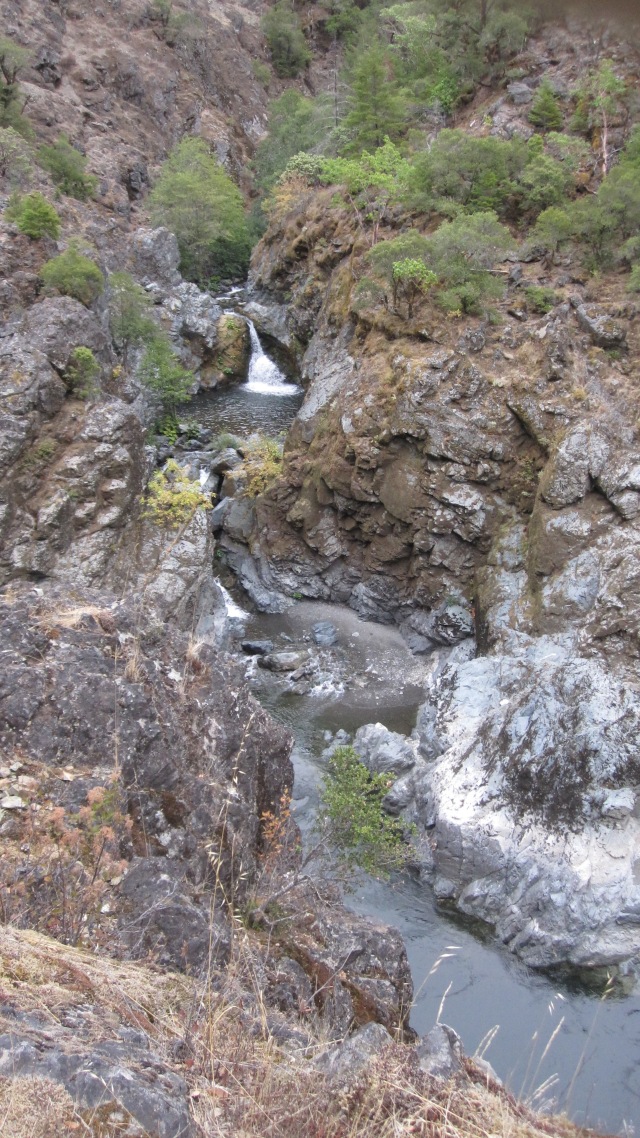 Just above the lodge are the Blossom Bar Rapids (Class IV), a particularly difficult stretch of the Rogue and one we hoped to hit at the right time to see some rafters coming through.  We stopped at a spot with a good vantage point and while waiting ate our lunches.  We loitered while eating, our version of the sandwiches just as satisfying as the day before.

Unfortunately, our wait was in vain and after a good amount of time, we decided to push on to Paradise Lodge and then turn around for the return.  This lodge doesn’t have drive-in access but is serviced by the jet boats out of Gold Beach.

We stopped in and grabbed a free cup of coffee, generous of them to offer but on the flip side, they wouldn’t let Joanna use the restroom.  We finally gathered our stuff and began the walk back, first stopping to observe the river from a deck at the lodge just as a jet boat came roaring up stream, turned around and headed back down river. 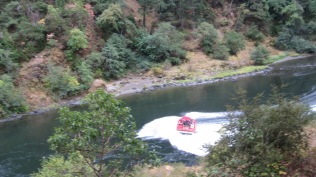 As we walked back up river and passed the Blossom Bar rapids, we noticed two rafts approaching.  They stopped to get out and view the rapids to determine the best course to take, then decided to off load one of the passengers, a child who for safety’s sake wouldn’t make the run through.  We’d gone far enough down the path, and knowing it would take some time for them to return to the rafts decided not to back track to the vantage point and instead push on to the car. 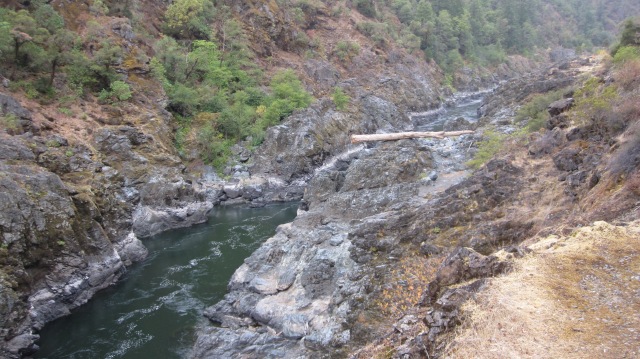 A little under an hour later we hit the trailhead, made the slow drive out on the most rugged section of the road and then took an alternative route back to Grants Pass.  It still made for a long drive and I’d be tired later that night due the combined effects of the hike and driving.  We stopped in Grants Pass for dinner at a new Italian restaurant, Brava Italian and settled in for what hoped would be a satisfying meal after a long and rewarding day.  The downside of living in small towns or rural environs (this was also echoed by my sister Bev later in the trip) is the lack of quality dining and/or sporadic nature of restaurant availability.  More than once we’ve heard our friends in this situation state that they just don’t eat out much because there aren’t any good restaurants in town.

A Narrow Section of the Rogue

Tom had heard good things about this place but its reviews are mixed; so we hoped for the best and our experience turned out to be a good one.  We didn’t see the need for any appetizers and so went straight for the entrees, Joanna ordering the Eggplant Parmesan (house marinara and mozzarella) and finding it tasty enough to polish the whole thing off by herself.  I decided on the Chicken Marsala (cremini mushrooms, brown marsala reduction sauce, and roasted potatoes), and Tom opted for a special of the day, an Angel Hair pasta with a pungent and arresting pesto sauce.

Overall we were quite pleased with our dishes, my chicken was tender, the sauce thinner than I would have preferred but with good depth of flavor none the less.  Tom’s portion was huge; he worked at it the whole time we were there and still took home over half, providing I’m sure enough leftovers for a couple of good sized snacks.

Returning to Kamp Angst, we all slept well that night and when the next day Saturday rolled around, decided to stay close to home, taking just a short day hike and relaxing after our adventures on the Rogue.  It also gave us a solid stretch of time, say from 3pm on to drink a bit of beer and engage in the lengthy conversations that occupy us when we visit Kathy and Tom; one never tires of the exchange.

Up the next morning at an early hour, we packed up the car and ate a hearty bacon and eggs breakfast with a 9am departure on the schedule, as we wanted to make it to our next destination, Crater Lake, by early afternoon to do some sightseeing there before we pushed on to our lodging for the night in Chemult.  Yet another successful visit to Kamp Angst had transpired, allowing us to see good friends twice in the same year, an unexpected pleasure.

And best of all, I concluded that two straight days of hiking significant miles with a loaded day pack was doable, aches and pains aside.  My ability to bounce back the second day and only have to experience the normal discomfort I’d get on any hike let me know that I could seriously consider hiking the Camino next year.  Time to start planning.