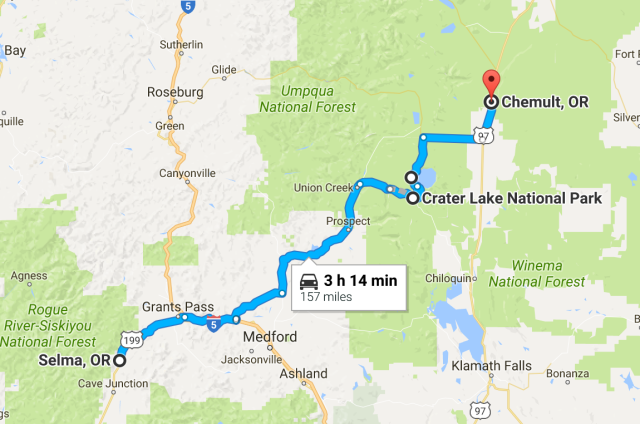 We accessed Crater Lake at the western entrance and drove straight to the Visitors Center, arriving right around 1pm.  We had arrived just in time to take in the 20-minute informational film about the park which gave us very good background on the lake’s origins and explains its appeal.  We then drove a couple of miles on the west rim to the Lodge to see if we could get a seat on one of the two remaining two-hour trolley tours that afternoon. 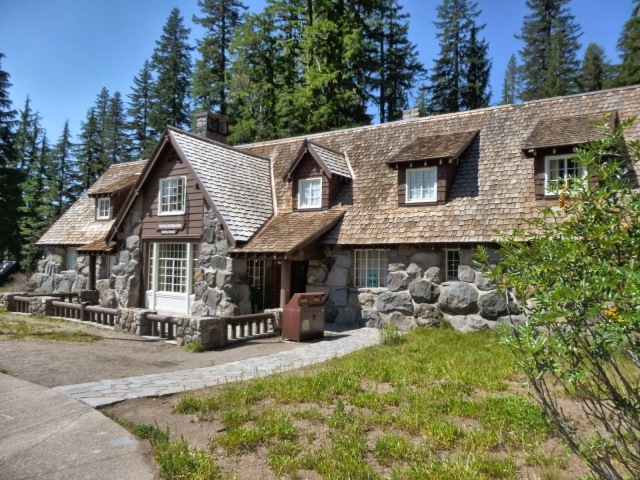 We don’t always take bus, tram, or boat tours, tending to want to explore by ourselves but have found that in some situations they make the most sense as they can give you a comprehensive overview of the place you are visiting, allowing you to then return to view those things of the most interest in depth. 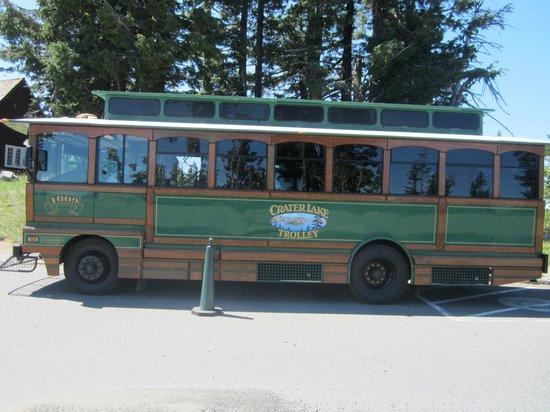 At the ticket office the saleslady advised that the 2pm tour was sold out, but that if we bought tickets for the next one at 3pm we might still get on the first one if there were any no-shows.  Just before show time she let us know there were two seats open and so we climbed on board the tram, grabbing the last couple of seats towards the back.

In the Back of the Trolley

At 1,949 in depth, it is the deepest lake in the United States, ninth deepest in the world, and was formed around 5700 BC, when Mt. Mazama collapsed into itself during a tremendous volcanic eruption, losing 2,500 to 3,500 feet in height.  The eruption that decapitated Mazama also laid waste to much of the surrounding region, depositing ash as far east as the northwest corner of what is now Yellowstone National Park, as far south as central Nevada, and as far north as southern British Columbia. It produced more than 150 times as much ash as the eruption of Mount St. Helens and formed a large caldera that took about 700 years to fill. 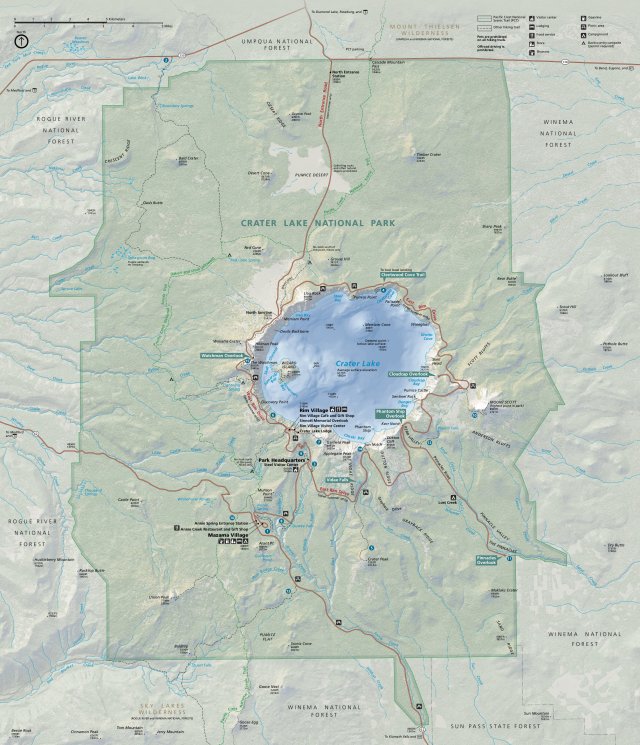 We drove first along the west rim, stopping at almost every view point for a look and some information from the ranger.  Your first impression of the lake is that it isn’t a big deal, but the more you stop and look, the more information you get about it, and as the water seems to get bluer, your estimation of it begin  to move it up a notch or two on the wow meter. 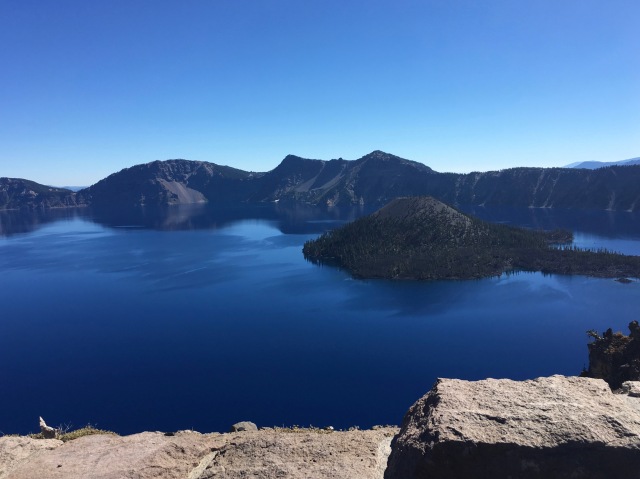 We stopped to take a look at Wizard Island, named so because it resembles the hat of that type of character, then continued towards the north side of the lake, stopping at Merriam Point before crossing over onto the East Rim road. 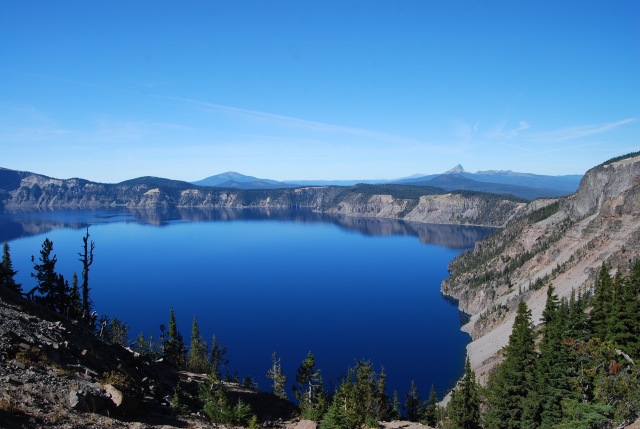 We continued south, stopping to view the Pumice Castle, formed by air fall deposits during the eruption that were buried and compacted by other lavas, then exposed when the surrounding softer material eroded away. 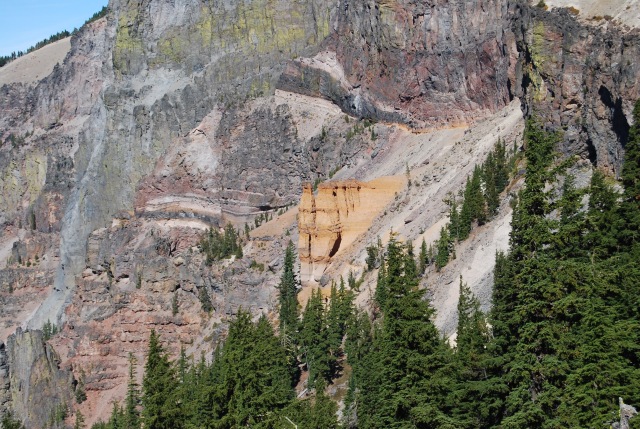 Next up was the viewpoint to see the Phantom Ship, a small island that is a natural rock formation pillar which derives its name from its resemblance to a ghost ship, especially in foggy and low-light conditions. Formed from andesite rock that dates from about 400,000 years ago, it is partly altered by hydrothermal activity. 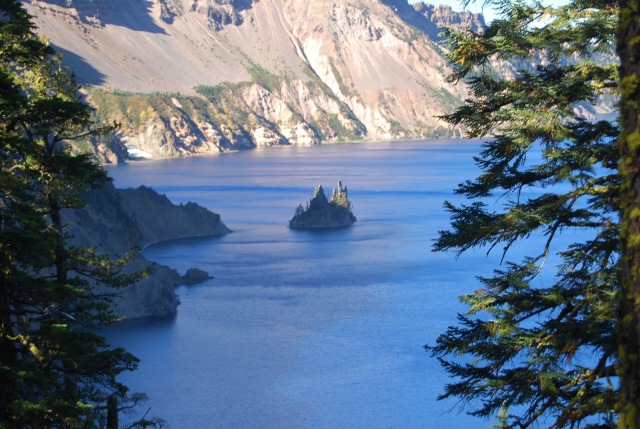 Soon enough we arrived back at the tram stop and after checking out the larger gift shop at the lodge, hopped in the car to head north out of the park and drive thirty minutes or so to our lodging for the night, the Budget Inn in Chemult.  This is a very small town on Highway 97 about halfway between Bend and Klamath Falls.  There isn’t much in the way of lodging there and of the options available, this one with an average rating was a winner for us as it only cost $63 a night and was described as tired but clean. 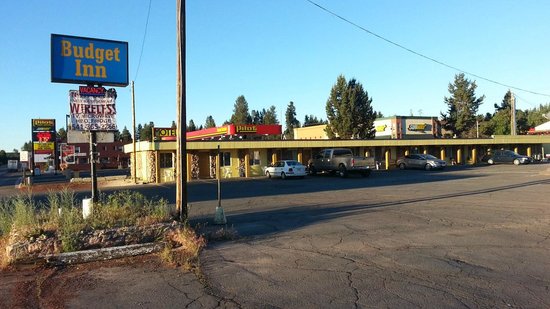 Here is the review I wrote in Trip Advisor:

There aren’t many choices for lodging in Chemult and this one is by far the least expensive. The rooms are small, its appearance is down at the heels, but everything in the room was clean and functioned. As for the town, about the only option for food after 3pm is the Subway/Pilot Station next door. Ask for a room at the back of the complex as road noise can be intrusive.

Because we had decided late in the game to travel to Crater Lake, and the lodging there is very limited and so consequently sold out, Chemult was our closest option for spending the night.  Once checked in to our small but adequate room and with a beer to refresh, we walked up and down the couple of blocks of town to see if any of the few remaining restaurants there were open.  Those still operating pretty much only serve breakfast and lunch and so we opted for the most viable choice, the Subway at the Pilot gas station next door to the motel.

Our Room at the Budget Inn

Later, back in the room, it was warm and the lack of air conditioning made for a slightly uncomfortable situation.  We tried opening the windows, but given that our room was close to the highway and backed up to the Piot Station, the noise emitted made that an option not worth pursuing.  We resolved to just be warm.  Having done the tram tour, we’d return to the park the next day and explore those areas not covered on the tour and try to get a couple of hikes in.  We fell asleep to the sounds of trucks using their engine breaks to slow down and loud conversations from the gas station.  It’s amazing we got any sleep at all. 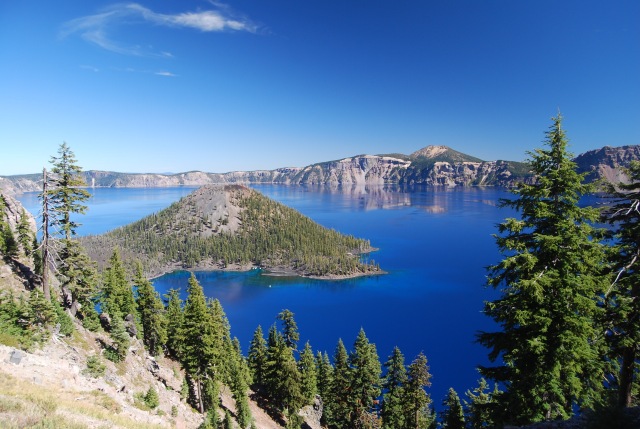