After a better night’s sleep, we arose to a day with not much planned, just dinner out later on at Chez Panisse.  While Kris and I hung out at the apartment, Joanna and Jessica spent the morning in Berkeley getting Joanna a new piercing for her ear.  Later in the day, we hopped in the Civic for the 20-minute drive back up to Berkeley for our meal at this iconic Bay Area restaurant, founded in 1971 by Alice Waters and known as one of the inspirations for the style of cooking known as California cuisine.  The restaurant focuses on ingredients rather than technique, and has developed a supply network of direct relationships with local farmers, ranchers, and dairies.

The main restaurant downstairs has always served a set menu which changes every day to reflect what is freshest at that moment.  Prices change by the day of the week ($75 on Monday, $100 Tuesday through Thursday, and $125 on Friday and Saturday).  We were opting for the Café, opened in 1980, which offers an alternative to the set menu of the downstairs restaurant.  It features the same local, organic ingredients as the restaurant, but has a more moderately priced a la carte menu that also changes daily.

We were seated at our table upstairs and began the process of studying the menu with an eye to optimizing our choices, that is trying to make sure that we’d covered enough of the offerings so that everyone at the table could get a bite of something different.  We started with drinks, a Kir Royale for the other three while I went for a sparkling Cava.  We decided to split a Goat Cheese Salad with Figs and a plate of Prosciutto, also with figs as they were in season and featured in a number of the choices.  It was a nice way to start the meal, appetizers light enough to tease you as you awaited your main course. 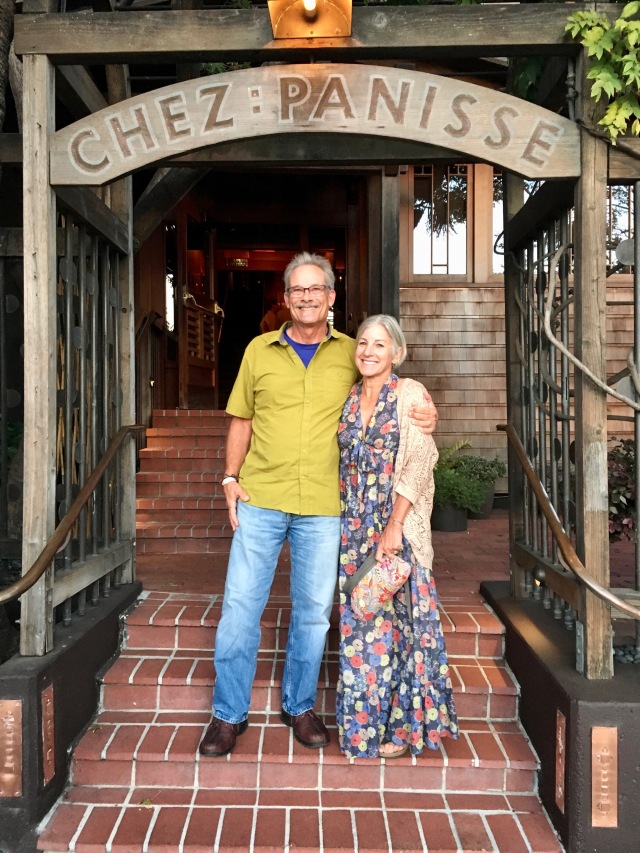 For entrees Joanna and Kris both ordered pasta with a mushroom ragu while Jessica went for the quail and I a pork cutlet, all accompanied by a bottle of Easkoot Pinot Noir, a good choice given the varieties of food we’d be consuming.  The winners by consensus were the quail and my pork cutlet, both delicately spiced with savory, mouthwatering sauces that transformed meat without much base flavor into delightful bites.  We finished up, comfortably full and made our way home, ready for a chockfull day of activity on Sunday.

But we had one more stop for the evening.  It was still early (our reservation at the restaurant at 5:00pm) so we left the apartment and walked a few blocks west and north to stop in at what we referred to as the Tiki Bar, otherwise known as Longitude.  We were seated at a booth and quickly decided, amongst all of the drink options, to get a flaming drink to share, the Queen’s Barrel (three rums, sparkling citrus and passion fruit).  It was the perfect way to end our evening out, sipping on a high octane cocktail from long straws, debating on how you kept the flame lit and planning on buying a similar bowl to have fun with when we all gathered again in Solana Beach the next weekend. 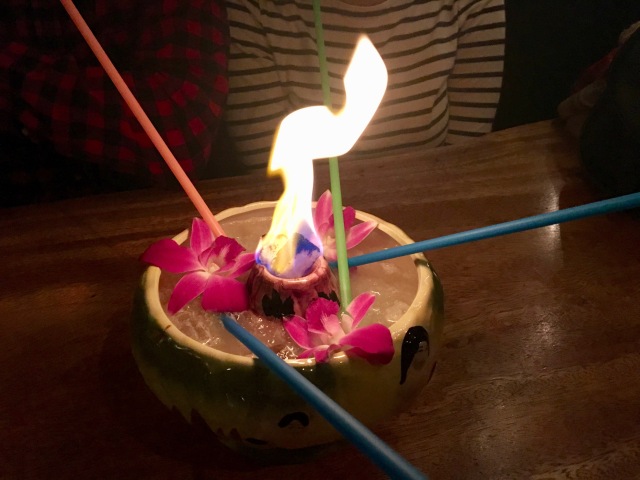 Joanna and I were up early, as usual, that next morning and after breakfast and coffee hopped on our bikes to ride up to Berkeley to get in some extra miles before a planned outing with Jessica and Kris that afternoon to ride bikes to a local brewery.  It felt quite nice to get on the bikes; we hadn’t ridden two weeks since our last outing in Bend, also knowing that we could given that our bike gear had been returned to us.

We took off riding due north through Oakland, eventually turning onto Mandela Parkway switch swung us around into Emeryville where we picked up Hollis Street and continued north which as we entered Berkeley doglegged and turned into Seventh Street which we stayed on until we reached University Avenue and the Performance Bike store, where we would stop to buy a number of replacement items for those things that had been stolen.

Finished with shopping, we rode west towards the bay, taking the San Francisco Bay Trail bridge over the I-80 to drop us back bayside at University for a snack at the Sea Breeze Market and Deli. 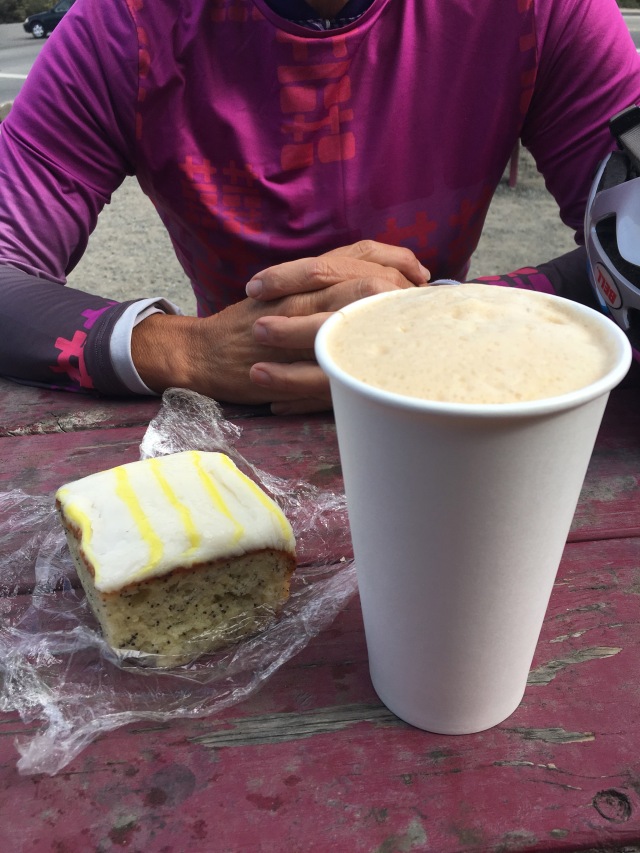 A long time institution in this area we’ve passed it by many times so were glad for the chance to stop and grab a cup of coffee and a tasty piece of lemon cake.  It was a gorgeous west coast kind of day, blue skies, moderate temperature, a touch of coolness in the air, just right for cycling and sitting outdoors in the sun knowing a fun day lay ahead of us.

Ready for the Ride Back

We got back on the bikes and returned to the apartment, this time hugging the shoreline on the trail until we reached Powell Street.  We made a short detour out to the Emeryville Marina at the end of the piece of land jutting in the bay, then doubled back to the heart of Emeryville and followed the familiar route home.

Not long after our return we set out again for Berkeley on our bikes with Jessica, Kris, their friend Alyssa and her climbing partner Ian to ride to our first beer stop of the day, The Rare Barrel.  This is a brewery devoted to the production and enjoyment of sour beers; not exactly a favorite in my flavor profile but fortunately that had a number of interesting non-sour guest beers which I could enjoy.  It is a shame though as the selection of sours was outstanding, may barrel aged, and everyone else appeared to thoroughly enjoy their selections.

We settled in for a hour or so of tasting; Joanna and I also split a Grilled Cheese Sandwich (sharp cheddar on sourdough with a splash of garlic infused olive oil) which while good just made us hungrier for more.  We closed out our tabs, hopped back on the bikes and pedaled back down to Oakland for a last stop at an old favorite, the Lost and Found Beer Garden.

We managed to pick off a table in the back courtyard (it was pretty crowded out there by then) and settled in for more beer and some food.  I started with the Craftsman 1903 Lager out of Pasadena (a heavy corn element adds complexity to a style that is commonly brewed for minimum character.  What Pabst would taste like if it were still made by humans, or so says the description on the menu) while Joanna went with the Faction Café Latte Nitro Stout from that great brewery in Alameda we’ve visited in the past.  For food we ordered the quesadilla (Monterey Jack, green onion, and salsa roja) and the spicy chicken gyro (cotija, chipotle adobo aioli, arugula, red onion, and stone fired naan).

Both items were good, although the ratio of meat to condiments in the gyro was overwhelming, way too much chicken and not enough of the other good stuff.  I ordered one of the Faction Nitro Stouts and we wiled away the rest of the afternoon in pleasant company, such a joy to be hanging out with people you love and their friends.

Finished at Lost and Found, we bid adieu to Alyssa and Ian who were heading off to do some indoor rock climbing and rode back the short distance to the apartment to close out the day and the weekend in Oakland.  It had started out in the worse way possible, a smashed window, lost property, that horrible feeling of being violated but in the end, little of true consequence or meaning was taken, the rest just stuff we could replace.

Life throws you a curve sometimes, knocks you out of your comfortable rut and forces you to face an ugliness that rarely crosses your path.  It’s at a time like this when it is important to remember what is truly valuable in this life.  It’s the family and friends that make us whole and provide us with the kind of happiness that can’t be bought in a store, but is earned simply by being a good person.  As Paul McCartney (credited to Lennon–McCartney) once wrote “And in the end, the love you take is equal to the love you make.”  Words to live each day by.