We left the apartment Monday morning not long after Jessica and Kris took off for work, a routine we’ve grown used to in the last few years given our frequent trips here.  As we’ve done before we stopped at a Starbucks just off the I-580 around Livermore, then continued to the I-5 and south towards Southern California.

We grabbed another buy one get one Egg McMuffin deal at a McDonalds and made good time the rest of the way, arriving at Ron’s house in Mar Vista just blocks away from Joanna’s parents old house and our home of many years down on Wade Street.  Over a beer or two we spent time getting caught up on events in our lives since the last time we’d seen each other, nearly a year prior. 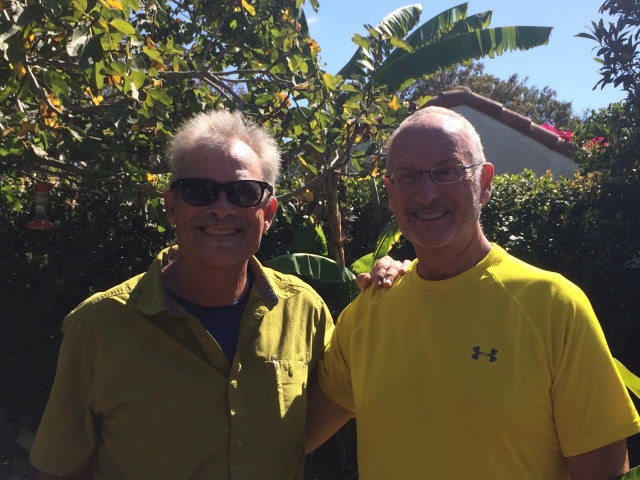 Jerry and Ron in the Backyard

At the appointed hour we made our way to, where else, but Paco’s for our long awaited welcome to Los Angeles Mexican food dinner joining our former neighbors Marilyn and Jason.  What more can I say about this place and this style of cuisine we grew up eating and judge all other purveyors of it by?  I had my usual Paco’s Burrito, a chili Relleno, lettuce and refried beans in a flour tortilla topped with a proprietary red sauce and melted cheese such that we’ve yet to find anywhere else.

With a busy few days in front of us we made it an early evening by returning to Ron’s and spending the rest of the night with him, exhausting most of his supply of beer and enjoying each other’s company.  Tuesday would be busy, starting with a drive out to Granada Hills to have lunch with a group of fellow ASUCLA retirees at the iconic Odyssey restaurant.  It’s a Los Angeles institution, around for so long my parents used to go there with a dinner group before they retired in 1984.  We’d never been so I looked forward to the setting and the company we’d get to see.

View from the Odyssey Towards the San Fernando Valley

As we arrived in the parking so did Ric, my long time ASUCLA, camping, hiking, and travel buddy (along with his wife Irene), who retired last year and whom we’d not seen in many years.  We would sit next to him during lunch giving us a chance to get fully caught up, much as I was able to do with my other table mates (Sally, Judy, Cid, Bobby, Lia, and Robin).  Joanna and I split the Cobb Salad (Chopped lettuce, grilled chicken, tomato, egg, bleu cheese, bacon, avocado, and balsamic vinaigrette) knowing we’d be meeting another group of friends later for happy hour at the Enterprise Fish Company.

After a lengthy lunch and much conversation, we made our way back to West Los Angeles, stopping to shop a bit at an outdoor adventure store we miss, Adventure 16 (A16) on Pico Blvd. near Sepulveda.  For many years their external frame backpack, two and four-man tents, and down sleeping bag were my essential companions when traveling, hitchhiking, and backpacking.  They don’t make their own equipment anymore but their overall selection is superb and although we now rely on REI more than ever, miss the option of shopping at A16.

We killed enough time by then to head straight down to Santa Monica and Enterprise, arriving just as Happy Hour was beginning.  The one offered here is excellent, with $6 Bloody Mary’s, Margaritas, Mai Tai’s as well as an array of interesting appetizers (Chicken Quesadilla, Vegetable Pot Stickers, Hawaiian Poke, and more) for the same price.  As the evening progressed Ron and his partner Linda joined us, then Heather, and then Debbie and Frieda, two friends from ASUCLA days.  We ate and drank, told wild tales, some true and others not so true and generally had a great time.

The Bar at Enterprise Fish Co.

The next day we set out for a bike ride with Ron down the bike path, planning on riding down to Redondo Beach and a coffee joint there before turning around for the return trip.  Our plans took a hit though when Ron’s bike, having been neglected for some time, decided to pay him back by experiencing a number of flat tires.  We had to be out in Chino Hills for dinner and an evening with Sheila and JB that night; needing to leave midafternoon meant we’d have to cut the ride short.

Riding south on the bike path

I made it has far as Manhattan Beach Pier, then turned around and re-joined Joanna and Ron post flat to pedal back to Playa del Rey (PDR) where we stopped for a cup of coffee and a snack at Tanner’s, a long established spot on Culver Blvd.  This area is an oasis in what has become an overdeveloped part of the coast line, the Marina del Rey and former Howard Hughes plant expanding in size, scope and density, making the Lincoln Blvd corridor a nightmare to navigate, my MBA alma mater Loyola Marymount just up the hill past Jefferson.  When I decided to attend there in 1995 the commute there from UCLA and my house was difficult but not impossible.  Faced with the same traffic conditions today my choice for a school to obtain an advanced degree might have been a different one.

We drank our coffee and let the go-slower vibe of PDR infuse us, making the shortened ride not a problem but more an opportunity to sit, talk, and relax.  We rode the river channel bike path back to Ron’s car (we’d not ridden down from his house, but I always used to do so when we lived on Wade St.) and landed back at his house, where we showered and set out for Chino Hills, a commute of 49 miles that would take us 90 minutes, L.A. traffic reminding us of the reasons why we grew tired of living there.

It had a been a busy, full, and fun few days in our old home town.  People often ask us if we would consider moving back here and most times our answer has been no, at least not to West Los Angeles and its crazy congestion.  But a phone conversation with a CPA in the car on the way to Moab threw a wrench into that thinking when we discovered that we could recover all of our capital gains deferment ($500,000) simply by living in the Wade Street house again for two out of five years.

We had not thought this possible, resigned to taking a large tax hit if and when we sold that house; this news altering that dynamic, making a move back a serious financial consideration.  The rest of our time on the west coast would be colored by this knowledge, as we began to look at each location as a potential landing place for us in the future.  It’s always fun when you are traveling to imagine what it might be like to live in a place.  This time around we did so with a less illusory eye, grounded in a new reality, one we could create for ourselves.  Who knows what the future might bring? For now, we were just going to enjoy the ride.