Jessica and Kris had a early flight out Monday morning and after we dropped them off at the airport, Kim, Marty, Joanna, and I drove west towards through Ocean Beach and Sunset Cliffs to Point Loma to spend some time at Cabrillo National Monument. On the way in, not long after you pass through the entrance to what is still an operating military base, we stopped in to pay our respects to my parents who are interred at Fort Rosecrans National Cemetery. 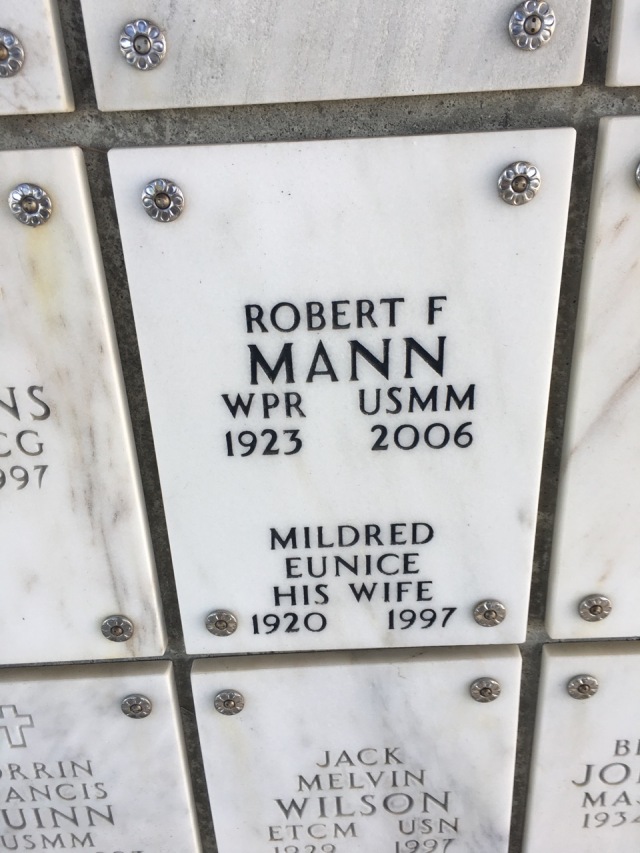 My Dad served in the Merchant Marines during World War II and some number of years ago the Federal Government recognized the contributions of these sailors in defending our freedoms by granting them access to burial in National Cemeteries. We’ve been here a few times to visit and can’t begin to describe in words what a beautiful setting it is, an unobstructed view of the coastline, a gently declining grass slope with signature symmetrical headstones leading down to cliff side. 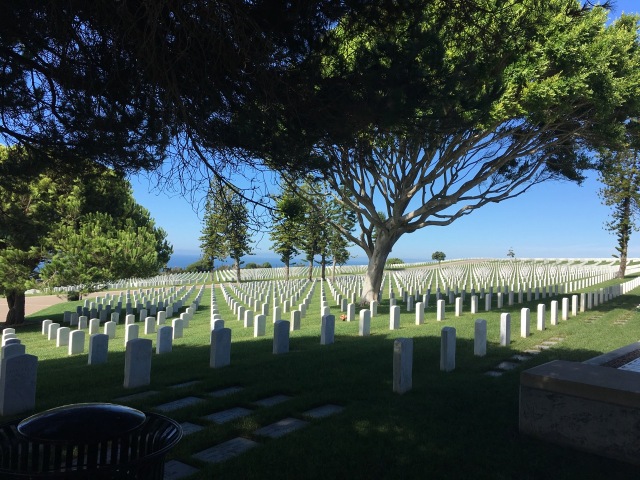 Those Who Have Served

After a bit of reflection, we pushed on to the parking lot that would lead us to the trailhead and a walk down to the tide pools at Cabrillo. I quickly discovered that I had worn the wrong shoes for this venture, my Birkenstock Arizona’s, not good for walking up and down dirt paths with irregularly terraced steps. But the views, crashing waves, and people watching were worth the minor discomfort of navigating the paths.

It was one of those days’ weather wise that helps you understand why this part of the country is so popular to live in and visit, with mild temperatures, blue skies and wispy clouds. We dawdled at the tide pools, watching the waves come in, filling pools nearby and receding, a ceaseless manifestation of the forces of nature.

The walk back up the cliff side took us to the trailhead where we picked up the car and drove a short distance into the heart of the monument to walk up to the Old Point Loma Lighthouse.

In 1851, a year after California entered the Union, the U.S. Coastal Survey selected the heights of Point Loma for a lighthouse. Construction began three years later and by late summer 1854, the work was done. More than a year passed before the lighting apparatus – a five-foot-tall 3rd order Fresnel lens, the best available technology – arrived from France and was installed. At dusk on November 15, 1855, the keeper climbed the winding stairs and lit the oil lamp for the first time. In clear weather its light was visible at sea for 25 miles and for the next 36 years, except on foggy nights, it welcomed sailors to San Diego harbor.

The light’s short life was due to a serious flaw in its siting: fog and low clouds often obscured the beam. Consequently, the lighthouse was shuttered and a new one built about 100 yards south on the Cliffside known as the Whale Overlook. We toured the exhibit located in the former home of the lighthouse keeper, climbed the spiral staircase to the entrance to the room at the top housing the light fixture (it was closed) and then walked the grounds before departing. As with other lighthouse sites we’ve visited, the gusting winds here are quite strong, lifting my visor off my head a couple of times with only quick action saving it from flying off never to be recovered. 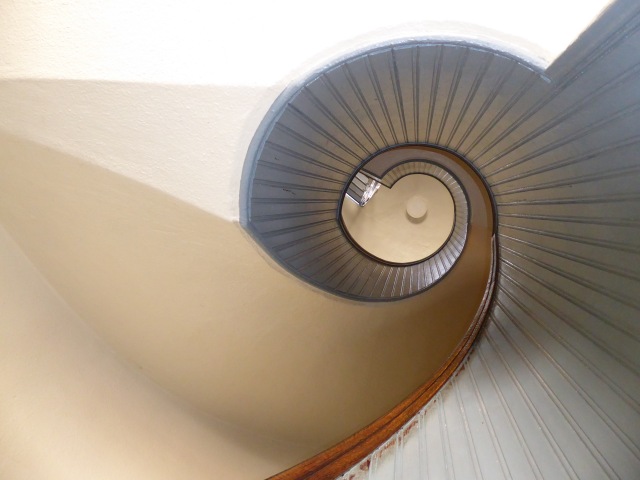 We left the monument and drove back down into Liberty Station to stop in at a new Stone venue, the World Bistro and Gardens, located in the retail and commercial phase of what was once a large Naval Training complex. Knowing we had a bunch of leftovers back at the condo for dinner later, we decided to just grab a beer and a snack (Hemp Seed Pretzel and those really good Charred Brussels Sprouts) and enjoy this new facility. As with other Stone operations, it is very nicely set up with a large indoor seating area and outdoor garden reminiscent of the landscaping used at their Escondido site. We finished up and drove back to the condo to enjoy a quiet afternoon and evening as Kim and Marty prepared to return home to Las Vegas the next day. 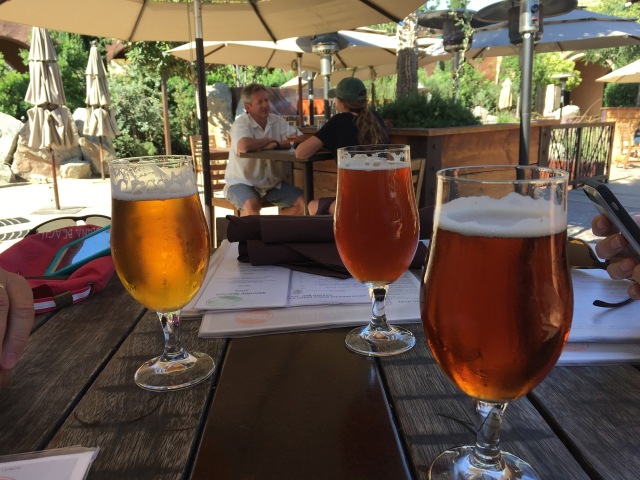 The next morning we helped our hosts pack up their car and saw them off for home. We’d originally planned on leaving a day or so after them and head to Carlsbad Caverns and Big Bend National Park, but found the lure of Solana Beach irresistible and so instead decided to stay a couple of extra days and then wind our way home through Scottsdale (which would give us a chance to visit Taliesin West) and Albuquerque.

We’d arranged for a bike ride with Evan, who drove down from San Clemente and a friend of his, Tim who took the train up from San Diego. We took a leisurely pace up Pacific Coast Highway, riding up to the heart of Carlsbad where we stopped for a brief cup of coffee at a Starbucks before returning, that lovely view of the ocean to your right and a slight tailwind providing a gentle push. We finished up with 26 miles, a good outing on a gorgeous day and after sharing a beer with Evan, cleaned up to await the arrival of a long time friend, Rick who would drive down from Huntington Beach. 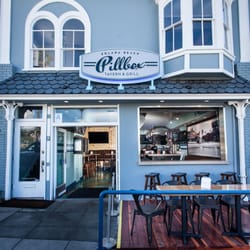 He arrived mid afternoon and after an hour of conversational catching up, we walked to PCH and then north to get food and drinks at a recommended spot, the Pillbox Tavern and Grill. It’s a small place; potentially the type of neighborhood bar one would find a home at if they lived in the area. We settled in at a high top table against the wall and Joanna ordered a Ballast Point Grapefruit Sculpin and I a Latitude 33 (Vista, CA) Oktoberfest (it was that time of year).

We split an order of Ahi Tuna Poke, and as it was taco day, Joanna and Rick each got a combo of cod and carnitas tacos while I ordered the Chopped Salad (lettuce, cabbage, celery, tomato, cucumber, corn, cilantro, bacon, & avocado tossed in peppercorn ranch dressing). I finished up with a Lost Abbey Dubbel and we left feeling full and happy. It would be an early evening for Joanna and I given the hectic schedule we’d been following and our plans to do a long ride the next day. So far our stay in Solana Beach was proceeding nicely.