As planned for that Thursday, we set out on the bikes to ride down to San Diego. I’ve ridden these roads and this route a number of times so could rely on memory for most of it and found it served me well. No sooner had we started riding then there was a quick descent past the North Bluff Preserve down to the flats where the Del Mar Fairgrounds and Race Track are located on the left, a great way to start the ride with the blue ocean to your right.

Continuing on you climb back up into Del Mar proper, then descend again to Torrey Pines State Beach before you attack the infamous Torrey Pines Grade, a 400 foot ascent over 1.5 miles, or about a 5% grade. Not a particularly difficult ascent but most of the times I’ve climbed it have come at the tail end of the 100 miles we’d ride down from the Santa Ana Amtrak Station to the San Diego station. Once you get to the top you ride along Torrey Pines Drive with the UCSD campus on your left, then descend along La Jolla Shores Drive into the town of that name.

We rode down the small narrow street known as the Coast Walk Trail to stop at Goldfish Point where the La Jolla Cave is located and watched watch a herd of sea lions basking in the sun on the shoreline; this being a nesting spot for them it creates an smell so malodorous that our brief pause was all we could manage. From there we continued south on Coast Blvd, a two lane road that winds along the shore, lined with pricey real estate on the left and the pounding surf on the right. 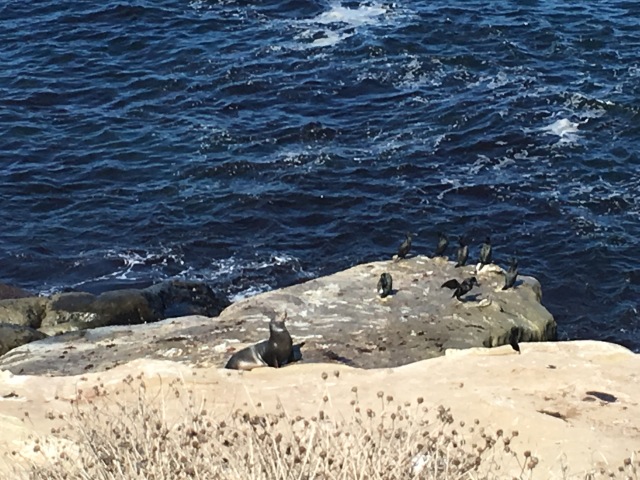 We worked our way back to La Jolla Blvd and continued on into San Diego proper, turning onto Mission Blvd and riding south many blocks through Pacific Beach to West Mission Beach Bay Dr., across the street from the amusement zone known as Belmont Park, where we stopped at a Starbucks on the corner to grab a coffee and a snack.

From there we did some by-the-seat-of-the-pants navigating to hook around Sea World and begin tracking north on East Mission Bay Dr., to Santa Fe Street connecting with the Rose Canyon Bike Path bike trail that leads up to Gilman Drive and the climb up into UCSD. 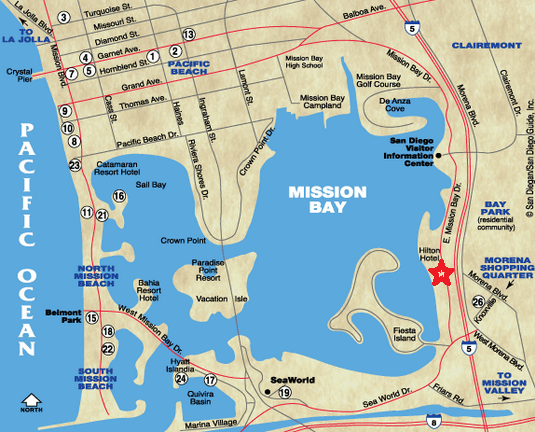 We wound our way through campus exiting back out on Torrey Pines Drive, eventually getting to ride down the grade into Del Mar and some miles later finishing up back at the condo for a total of nearly 41 miles on the day, a big ride for us on our cross bikes and given we hadn’t been riding all that much in the last couple of weeks. Our original intent that night was to cook, but the prospect of shopping and then preparing was a bit daunting and as we’d yet to reach our fill of So-Cal Mexican food, or make a visit to Juanita’s Carnitas in Encinitas, the decision was a simple one.

Burritos for dinner; the classic compromise for tired cyclists who arrive hungry, order one Carnitas and one Chili Relleno burrito and savor the consistent quality this place delivers. One down note though is that the Chili Relleno offering is loaded with lettuce and doesn’t have a strong chili note like one would expect. Not that I struggled to eat it mind you, but might not order it again the next time around.

Our last day in Solana Beach would be a full one, touching base with our former Wade Street neighbor Steve, who had recently moved to Carlsbad with his family, and finishing up with a hike and dinner with Jan and Evan. We drove down to Steve’s new house, said hello to his wife Sharon and after a tour of their new digs drove down to PCH for breakfast at the Daily News Café. We sat outside and ordered, Joanna and I splitting the Californian Omelet (three eggs, avocado, tomatoes and jack cheese). It was nicely done but at $12.95 we didn’t find great value in what we consumed. Steve had the Chunky Chicken Salad sandwich, with a side of fries at $11.95 a better bargain than the breakfast offerings. Throughout our time with Steve he extolled the virtues of Carlsbad, its walkability, how easily they had adapted to living there, how comfortable their lives were.  Given we continue to view this area as a potential landing ground for us at some time in the future, his arguments fell on sympathetic ears.

We finished up breakfast and walked around the core of downtown Carlsbad, a charming three blocks or so collection of small shops and business. We dropped Steve off at his house and made way for San Clemente, where we picked up Jan and Evan and drove straight away to the Dana Point Headlands Conservation Area, a 121.3 acre site with trails and a nature center, where we embarked on a short but rewarding hike down to the beach and back up to Strand Vista park with its stunning views up and down the coast. 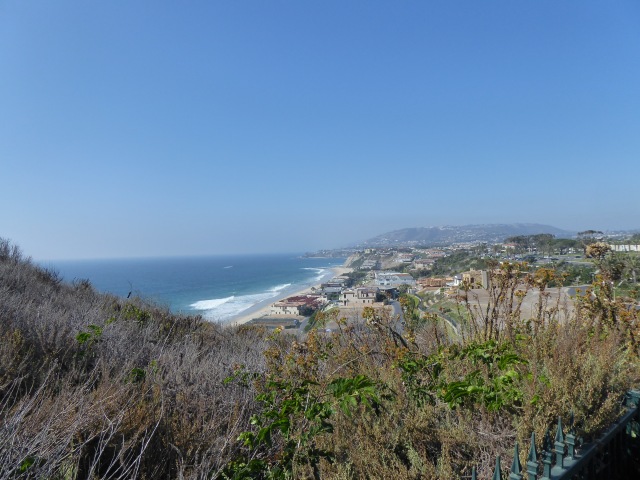 Looking North up the Coast

We returned to Jan and Evan’s house where a beer or two were consumed and at the appropriate time drove down to San Clemente proper for dinner at a long time favorite Mexican food restaurant, El Mariachi. I’ve enjoyed a number of meals here while in town and was looking forward to the meal I almost always order here, their very good Chili Relleno and hard shell beef taco combination plate. Here is the review I wrote for Trip Advisor:

We stopped in for dinner with friends in October anticipating good food at reasonable prices, having dined here a number of times over the years. The first hint we had that things would not be the same is that the menu had changed, shrunk down to just a few items and all of them much pricier than we would consider reasonable for generic Mexican food. I ordered my standard, a chili relleno and beef taco combo, priced at $14 which included rice and beans. Was it as good as I remember? Not really and at that price point there are a dozen places within ten miles where I could get the same quality of food for a third less. I doubt we will return.

On Shore at Dana Point

A disappointing finish to our time in Southern California, but one that wouldn’t negatively color the enjoyment we’d experienced during our week along the beach. It’s hard to say where we will eventually end up in the future, as we truly do like living in Charlotte, but this area exerts a strong pull. Only time will tell and for now, it isn’t telling. Tomorrow would bring a drive to Scottsdale, not too many miles giving us time to adequately clean the condo and close it up until Kim and Marty returned. Time to get back on the road.