After cleaning up the condo and loading the car we drove to a gas station near the I-5 to fill the Highlander, hit a Starbucks to redeem a reward, getting one of their very good breakfast sandwiches, and then jumped on the freeway to start the seven hour drive to Scottsdale and the Best Western InnSuites Phoenix, our resting place for the night.

A relatively easy drive on the interstate, we arrived at the Best Western around 5pm, checked in, stored our bags in the room and then ambled on down to the lounge for the complimentary reception held each night.  These affairs are a mixed bag, generally offering generic beer (Miller or Miller light in this case) and inexpensive wine, which is OK because I gravitate towards the lower grades of vino.  Snacks were pedestrian, a good thing as we didn’t want to get too filled up in anticipation of our big meal out that night at, wait for it, its coming, yes, In-N-Out.

Except for an isolated outpost or two in Texas, Arizona is about as far from the west coast as this chain will expand as they seek to maintain the quality standards they feel are integral to their continued success.  We’d deliberately not eaten much that day so we could order big, a double/double for me, fries to split, a single for Joanna topped off with a chocolate shake.  I try to limit my hamburger intake to one or so a month, as I battle (like many) high cholesterol and my doctor’s advice is that beef should only be consumed in limited doses.  So I try to save my burger experiences for the best I can get and In-N-Out is one of those.

With a busy morning at Taliesin West in front of us and then a seven hour drive to our next destination, KOA Albuquerque North in Bernalillo New Mexico we spent a quiet evening back in the room, arose early, took care of our morning rituals (stretching for me, a bit of exercise in the fitness room for Joanna), ate our free breakfast, filled up the insulated travel mug with Best Western coffee and hit the road for our tour, about 20 minutes away.

Taliesin West was Frank Lloyd Wright’s winter home for himself and his Frank Lloyd Wright School of Architecture from 1937 until his death in 1959 at the age of 91.  Today it is the main campus of the school and houses the Frank Lloyd Wright Foundation.  Wright believed this to be the perfect spot for such a building: a place of residence, a place of business and a place to learn. Wright described it like this, “Finally I learned of a site twenty-six miles from Phoenix, across the desert of the vast Paradise Valley. On up to a great mesa in the mountains, just below McDowell Peak we stopped, turned, and looked around. The top of the world.” (Wright, Frank Lloyd, 1943. An Autobiography. Duell, Sloan and Pearce)

We parked in an adjacent dirt lot and walked to the reception desk inside the gift shop where we started the tour not long afterwards.  Our first stop was to look at one of the large rocks inscribed with a petroglyph that Wright had moved, against the law now, to this spot.  From there we spent the next ninety minutes touring, starting with Wright’s office, then moving onto the front of the main building which houses the drafting studio for the students.

All of the walls of the buildings are made of local desert rocks, stacked within wood forms, and filled with concrete.  Wright favored using materials that were readily available rather than those that must be transported to the site, an esthetic carried out at most of the properties he designed. 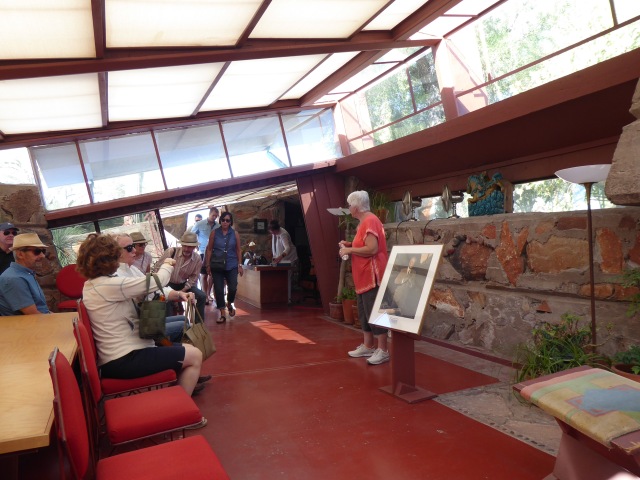 Here it was rocks and large boulders, with the flat surfaces of the rocks facing outward and using large boulders to fill the interior spaces so as to conserve concrete and the water it took to make it.

As with all of his designs, Wright believed natural light aided the work environment; in the drafting room, he used translucent canvas to act as a roof (later replaced by plastic because of the intense wear from the Arizona sun).  In the south-facing dining room, the masonry walls do not extend all the way from the floor to the ceiling and the roof was designed to hang past the walls preventing unwanted sun rays from penetrating but allowing for horizontal light to pass through the room.

We worked our way around to the side of the property where Wright and his third wife Olga Ivanovna (Olgivanna) had their personal quarters which includes a large front room (Garden Room) and a wing housing their sleeping accommodations, a bath room (the only indoor facility at the time the place was built) and an office for Olgivanna.

In the LIving Room

We were at the tail end of the tour now working our way around the back of the complex, past a small pool and the other side of the drafting studio to enter the cabaret theater. 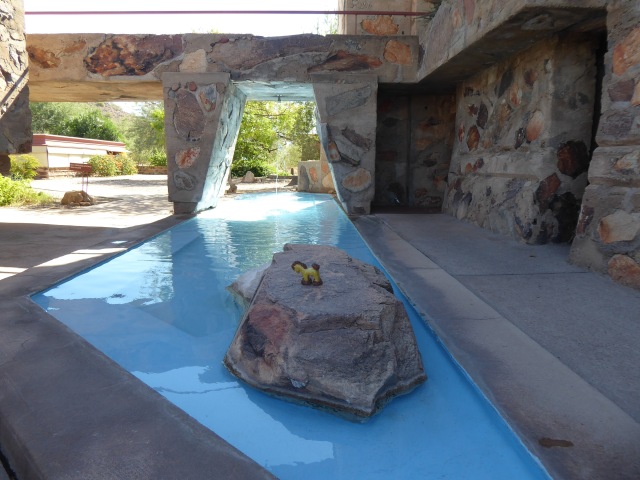 Like the one at Taliesin, this was intended to be the center of entertainment for Wright and the folks that lived and studied here.  Brilliantly designed, it is built with six sides out of the standard rock-concrete mixture used throughout the rest of the buildings, in an irregularly hexagonal shape, to provide its occupants with what someone has called “95% acoustic perfection”.  Someone sitting in the back row can hear the lightest whisper from a speaker on stage.

We finished our tour, made a final brief stop at the gift shop and started the drive to Albuquerque.  Our visit to Taliesin West had reinforced our interest in Frank Lloyd Wright and his body of work.  Having visited several houses of his design, it gave us much to look forward to in visiting others.  Not a bad way to travel the country, using his projects as a motivation to visit a place.  Particularly if those places have good micro-breweries.