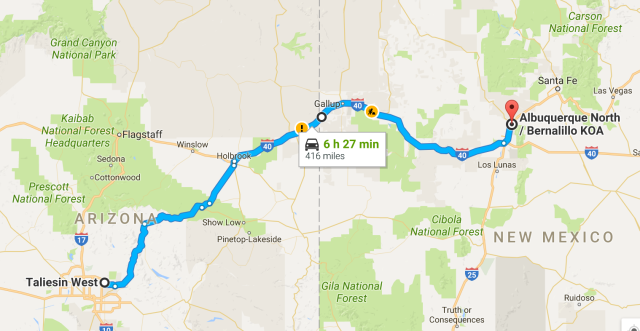 The first half of our drive to Albuquerque was off the interstate as we made way on the diagonal from Scottsdale up to the I-40 in Holbrook, which lies about 30 miles east of Winslow, where Glenn Frey and Jackson Browne are still standing on a corner looking at a girl, my lord, in a flatbed Ford. Weather as we drove was gray and cold but later in the day the sun broke through and as we reached the outskirts of Albuquerque and then turned north on I-25 to drive the 10 miles or so to Bernalillo, the skies cleared and promised us good weather for the duration of our stay. 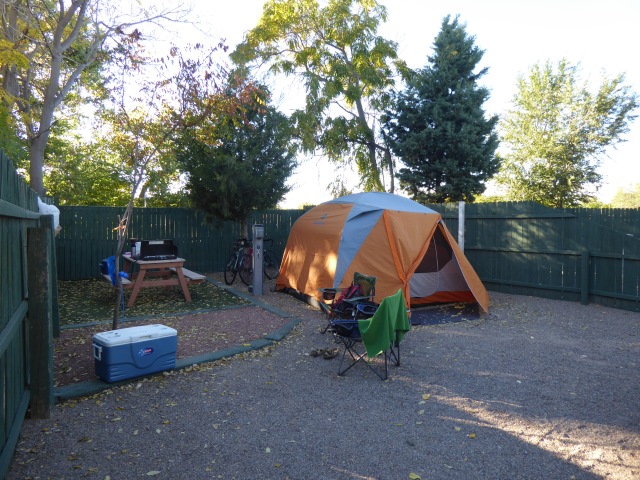 Check in at the KOA went smoothly and as one of the few tent campers, we had several sites to choose from, opting for one that could best fit our large tent and still allow for parking the car. One big bonus of this KOA is the ease of access to Kaktus Brewing, located through a wooden door at the edge of the campground and just around a corner. After setting up camp we walked over to the brewery, sitting outside on the patio on a warm late October evening.

We ordered a couple of beers, all good but nothing outstanding and a Bison Frito Pie (corn chips smothered with 8 ounces of bison chili seasoned with oregano, chipotle, coriander, and paprika) and the Kaktus Cobb Salad (fresh spinach tossed in Balsamic Vinegar with bacon, red bell peppers, red onion and Vermont cheddar cheese). The salad was interesting, but not really a typical Cobb what with it missing turkey or chicken and importantly, avocado, but he Bison Frito Pie was delicious, hearty, and nicely spiced. Joanna and I battled over who would get to eat the most of it. With four beers and the two entrees, our tab came to $33, not a bad outing from a budget standpoint. 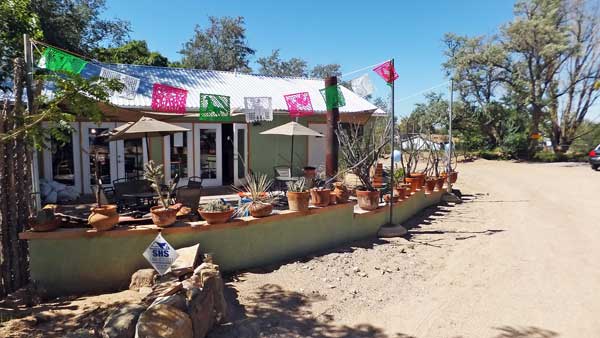 The Patio at Kaktus

After breakfast the next day we set out for a full day of exploring, starting with Rinconada Canyon and the Petroglyph National Monument. We parked at the Visitor Center, formerly the home of Dr. Sophie Aberle and her husband attorney William Brophy, for a quick visit and to take in the 22-minute film about the park. Dr. Aberle, known as the “Measuring Lady” by the Native Americans she worked with, was the first practicing applied anthropologist in the United States. Her research focused mainly on women’s lives at the pueblos, including pregnancy, childbirth, childcare, diet and healing. 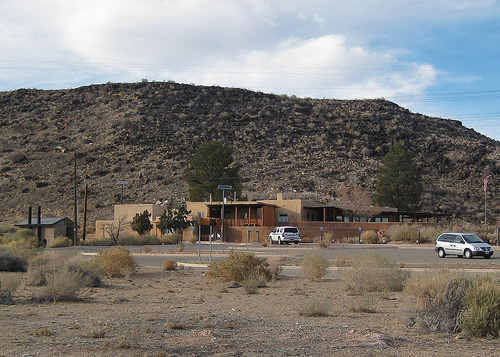 Sometime between 1954 and 1956 she and her husband purchased an adobe-style home on what is now known as Albuquerque’s West Mesa. In 1990, Dr. Aberle agreed to sell the home to the Department of the Interior as part of the establishment of Petroglyph National Monument. On July 11, 1996, the staff of Petroglyph National Monument celebrated Dr. Aberle’s 100th birthday by inviting her back to her home. 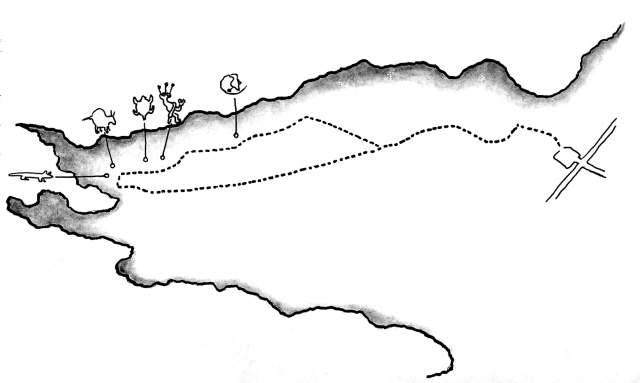 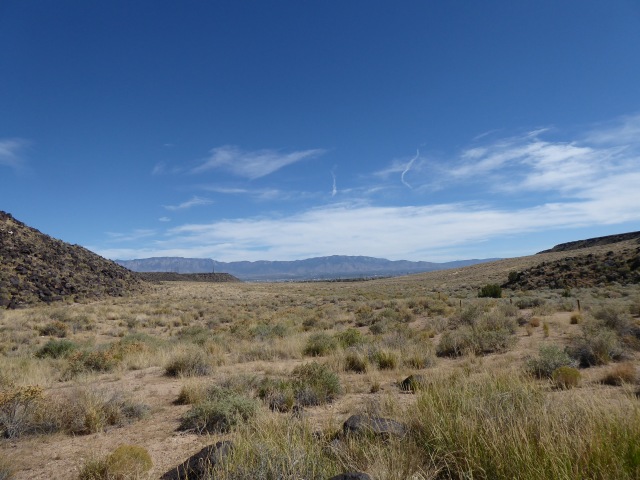 Looking Back towards Albuquerque

After our stop at the Visitor’s Center we drove over to the trailhead at Rinconada Canyon to hike the 2.2-mile loop trail and view the petroglyphs. One eye opening revelation is that given the definition of the term (a rock carving, especially a prehistoric one), what was on display here was a mix of ancient as well as current carvings. We worked our way back to the car and took off for downtown Albuquerque to spend some time in the area known as Old Town. 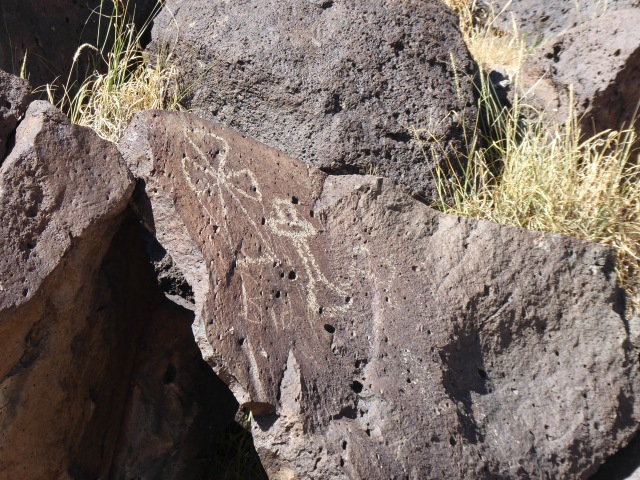 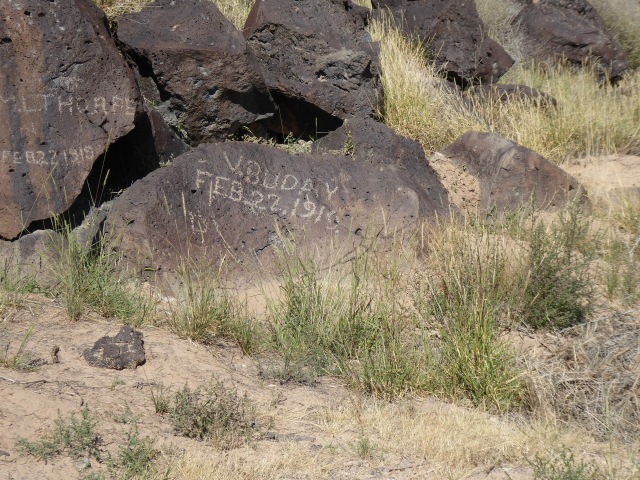 We walked most of the blocks of this charming tourist area, full of gift, jewelry, and curio shops, finally popping into the San Felipe de Neri church; built in 1793 it is one of the oldest surviving buildings in the city. The original building was completed in 1719 but collapsed in 1792 after a heavy rain and was replaced by the current structure the following year. It’s not the most ornate of churches we’ve visited and yet it had a calming dignity that was a refreshing break from the touristy area that surrounds it. 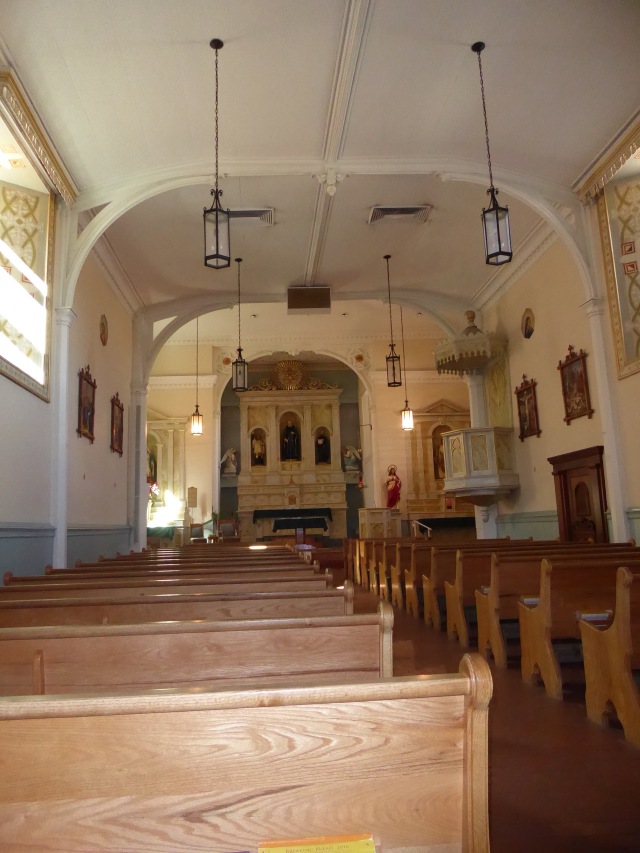 Our last stop for the day was back up in Bernalillo, at the Coronado Historic Site. Although it is named for Vasquez de Coronado, who camped in the vicinity in 1540–1542, this archeological site is most noted for the ruins of Kuaua pueblo. The pueblo or village was settled about 1325 and abandoned toward the end of the 16th century. Kuaua was one of several Tiwa-speaking pueblos in the area when the conquistador Vasquez de Coronado arrived, and the village was almost certainly abandoned due to the after effects of the Tiguex War (February 1541). 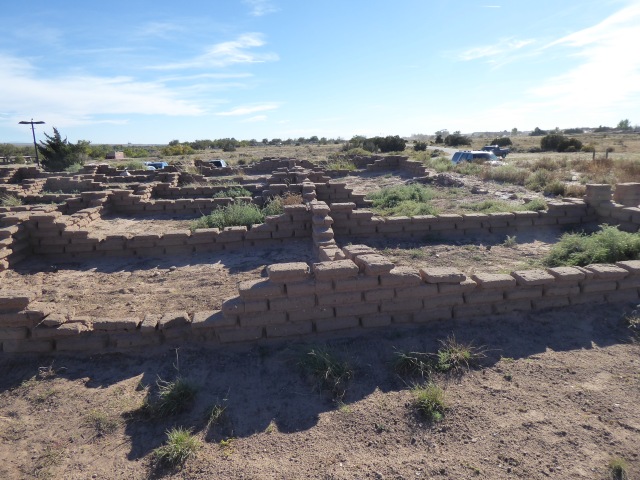 Restored by the WPA on Top of Original Ruins

The ruins of Kuaua Pueblo were excavated in the 1930s and revealed a south-to-north development over the village’s three centuries of existence, as well as six kivas built in round, square and rectangular shapes. The site is particularly noted for a series of pre-contact (pre-1541) murals that were recovered from a square kiva in the pueblo’s south plaza. These murals represent one of the finest examples of pre-contact Native American art to be found anywhere in North America, fourteen of these restored murals are displayed in site’s visitor center. 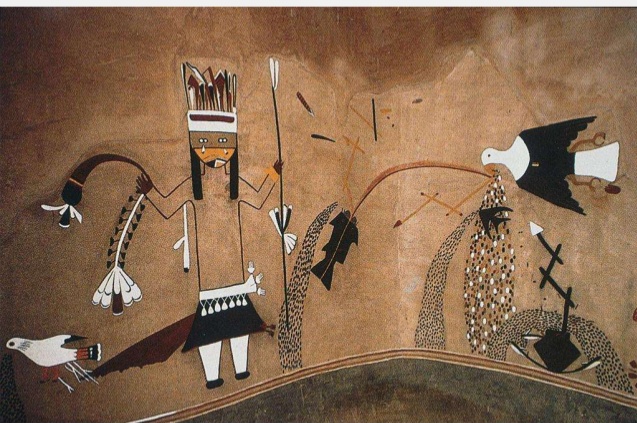 We’d missed the last tour of the restored kiva, but the friendly park ranger made an exception and took us to the building, where we climbed to the roof and then lowered ourselves inside to view the wall murals and listen to his explanation of how the natives used the interior for their ceremonies. It was a nice way to end our visit to the site and we left feeling we’d explored it in the depth needed to understand the role this site played in the lives of those who lived in this area. 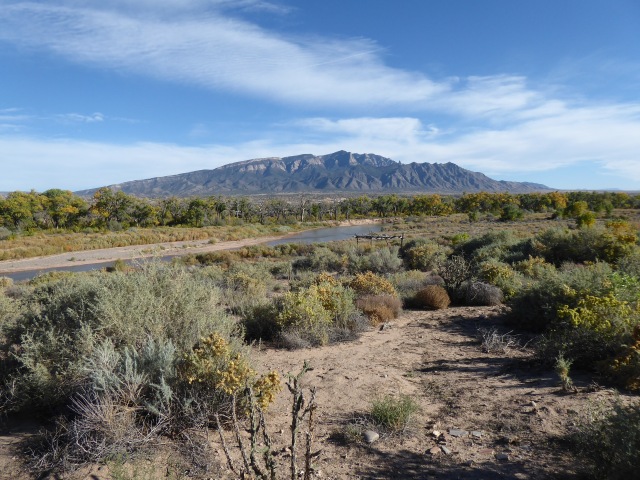 The Rio Grande with Sandia Mountains in Background

On the way back to camp we stopped at the market to pick up a bag of salad and baguette for dinner that night, adding tuna to the mixture for our usual simple camp meal. Later we strolled back over to Kaktus for a couple of beers and to watch the weekly belly dancing performance. All in all it had been a fine first day in Albuquerque. We’d do our best to have another the next day. 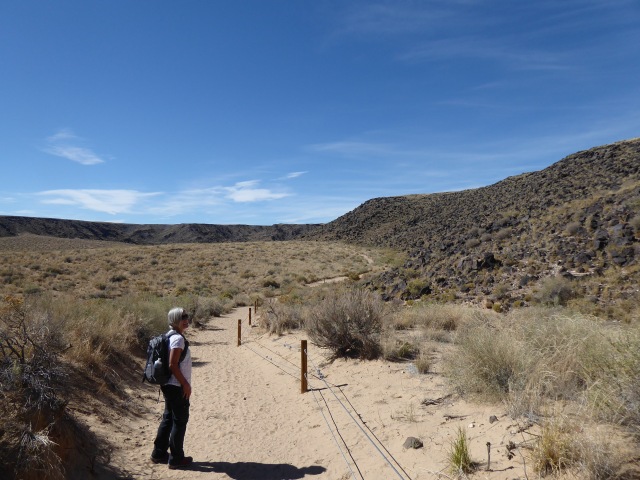