Our goal for our last day in town was to get in a moderately long day hike, do a bit more random sightseeing and eat dinner at a well-known Albuquerque restaurant, The Range Café.  After a leisurely morning in camp where we scouted out hiking options, we set out for the parking lot at the Sandia Peak Tramway and the trailhead for the Tramway Trail. 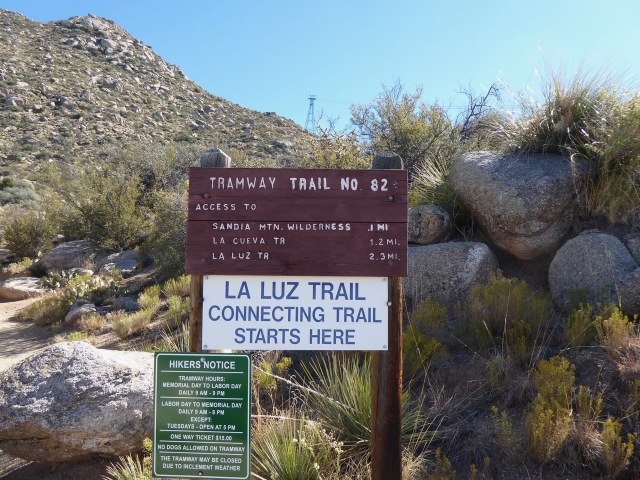 This is a 4.5 mile out and back that travels north along the western foothills from the Tram terminal to meet the La Luz Trail, which can be joined if desired to hike to the top of the mountain (then ride the Tram back down). 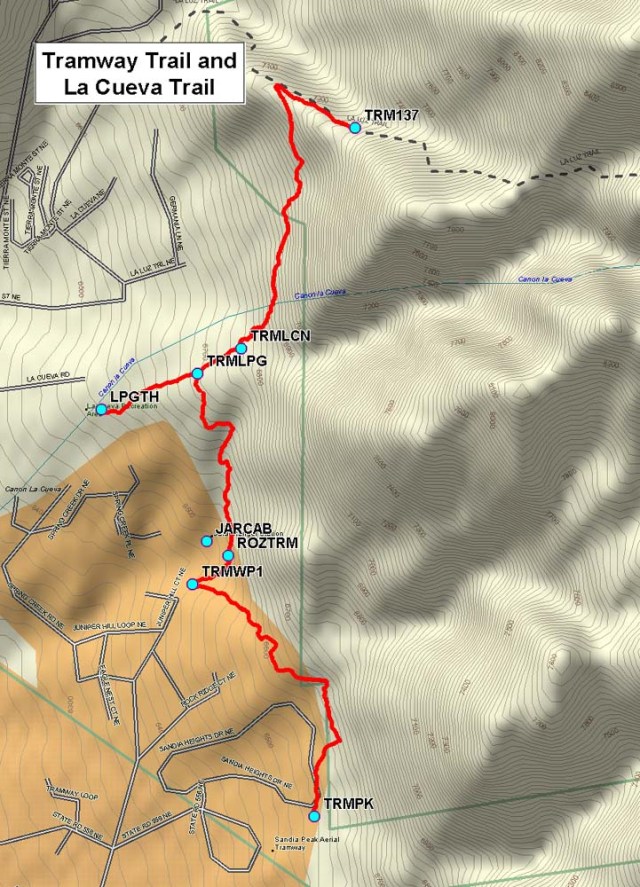 We opted just to do the shorter hike which turned out to be a good thing as I wasn’t feeling that well that day, with little energy, making the going tough.  So roughly two miles in, with no hint of the trail junction in sight, we turned around and walked back to the car. 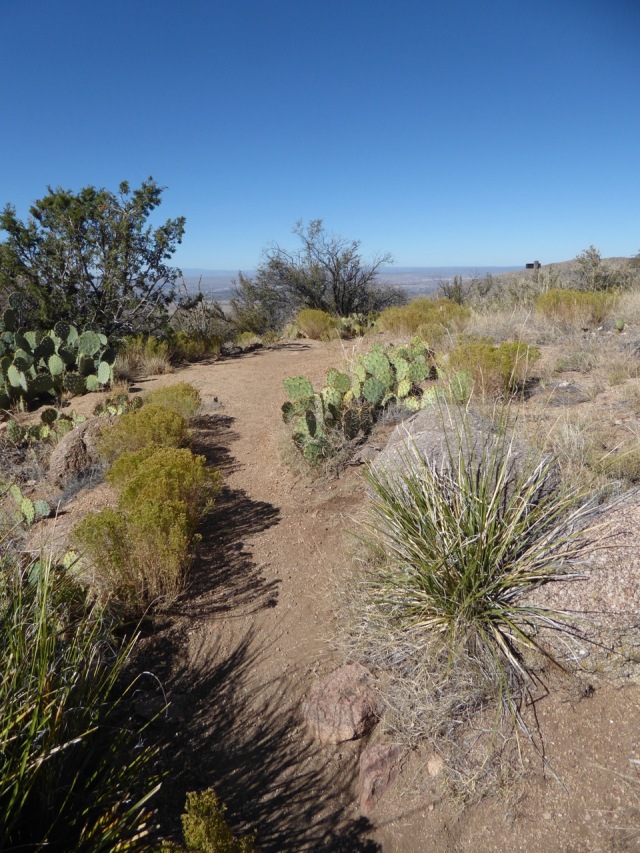 Watch out for the Cactus

From there we drove towards downtown Albuquerque in search of landmarks recalled from a conference I attended many years back and having located a few, started back towards camp stopping to look at Balloon Fiesta Park where the annual Albuquerque Balloon Festival is held each October.  We drove slowly through this large complex (including a 78-acre launch field), glancing at workers dismantling parts of the facility as this year’s festival had recently completed. 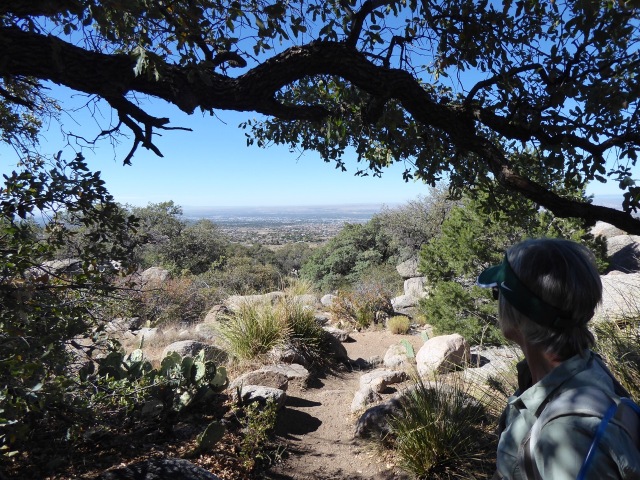 Albuquerque in the Distance

While we were driving through the complex Jessica sent us a message that Joanna’s Facebook account had been hacked and someone, posing as her, was sending out friend requests.  So, we were a bit preoccupied while driving, finally reaching the end of the complex and parking so that Joanna could take measures to shut down the hack.  We’d only been parked for a moment or two when a pick-up truck pulled up next to us, the driver’s window opened, and a woman asked us what we were doing there.

We responded that we were just looking around and were promptly advised that we weren’t allowed on the grounds and had driving right past a guy who tried to stop us.  We apologized for the intrusion and as directed left the grounds through a nearby exit, commenting amongst ourselves that we hadn’t recalled seeing anyone trying to stop us, but that the Facebook hack may have distracted us. 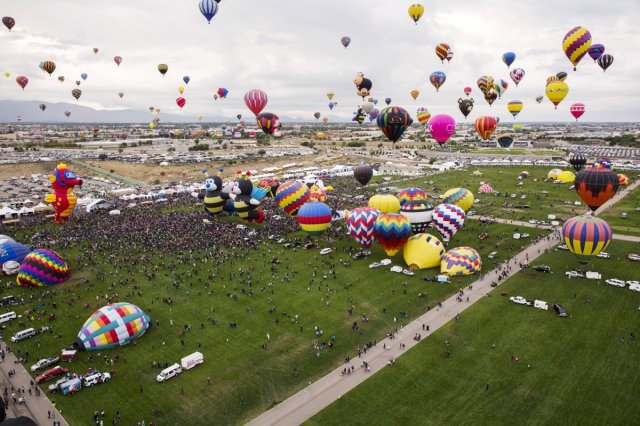 Chagrined, we returned to camp and spent the rest of the afternoon relaxing and preparing for two days of driving to Kansas to spend the last few nights of our trip with my sister Bev and her husband Bill. 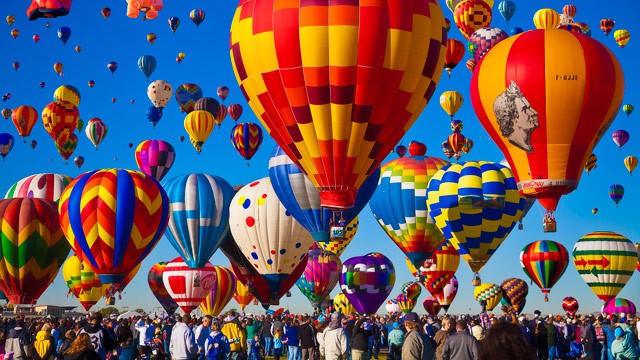 While Joanna spent some time on a call to her Mom, I walked to the small park next to our site and took a trip to the past, sitting on one of the big swings and after taking some time to remember just how you propel yourself on one, getting the hang of it again to launch myself higher and higher against the blue Albuquerque sky. 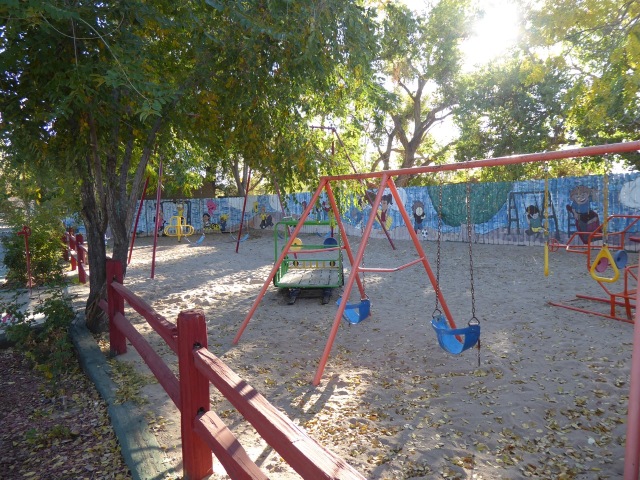 Stepping Back in Time

As is often the case for our last night in camp, we opted for dinner out, this time at one of the higher rated local spots, The Range Café.  Located not more than a couple of miles from camp, it took us just a few moments to get there, parking across the street in a lot that was difficult to find given a confusing drive-way.  We entered the restaurant, by-passing the large gift shop and were seated in an alcove off the main dining room. 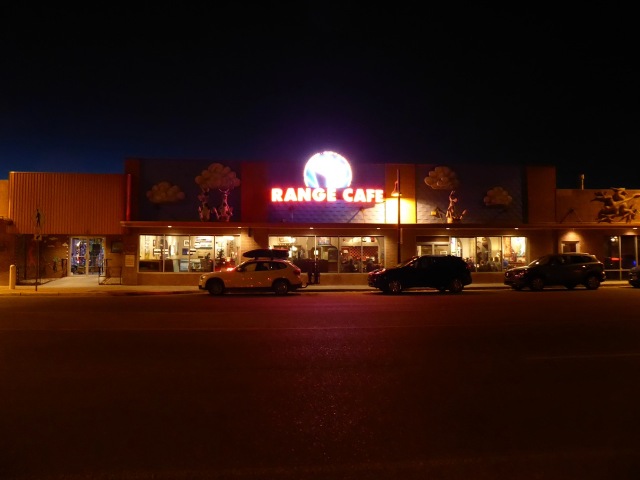 Starting with a couple of local beers, we ordered a bowl of the Green Chile Chicken Stew, which came shortly thereafter and presented us with a preview of things to come portion wise as it was large.  This was a stew unlike what we had anticipated, a thin but flavorful broth full of chunks of chicken, carrots, celery and tomatoes topped with tortilla strips. 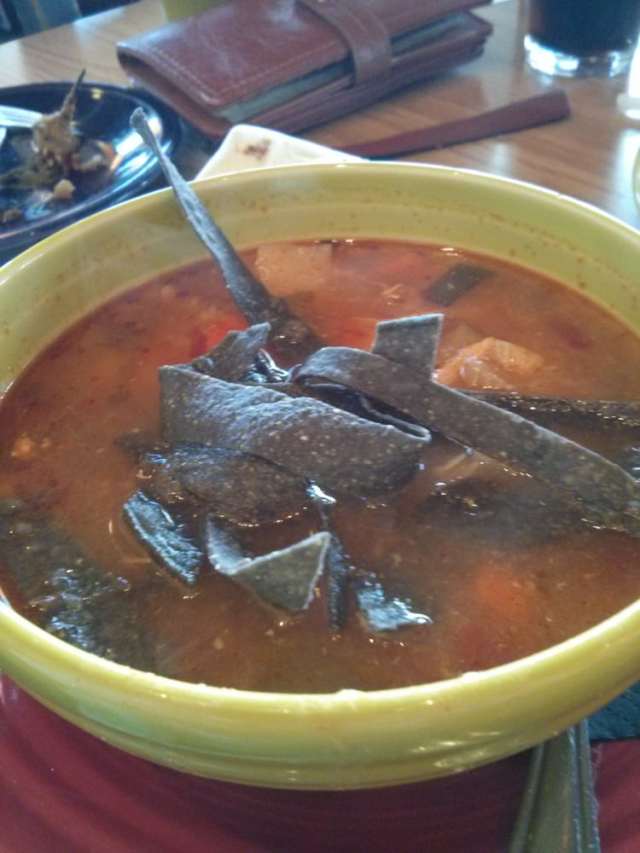 It didn’t take long for us to demolish the bowl and not long after the entrée we had ordered to split came, the Plato Combinacion del Rancho (blue corn Chile Relleno, chicken taco, and two rolled beef enchiladas). 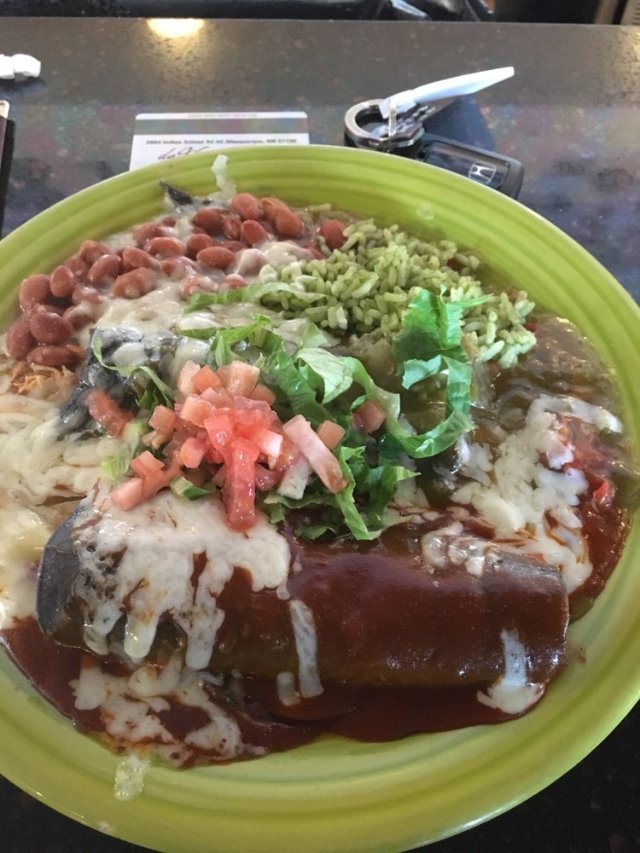 A Plate Full of Food

Like the soup portion, it was so large it is hard to imagine that one person alone could eat it all, but we put in a good effort and did clean the plate.  Given it was our last meal out in town, we ordered the Amaretto Bread Pudding (Raisins, toasted almonds, served warm with Amaretto butter sauce) which when it came was delicious and again, large enough so that after taking multiple bites and barely putting a dent in it, we took it back to camp and finished it off the next morning for breakfast. 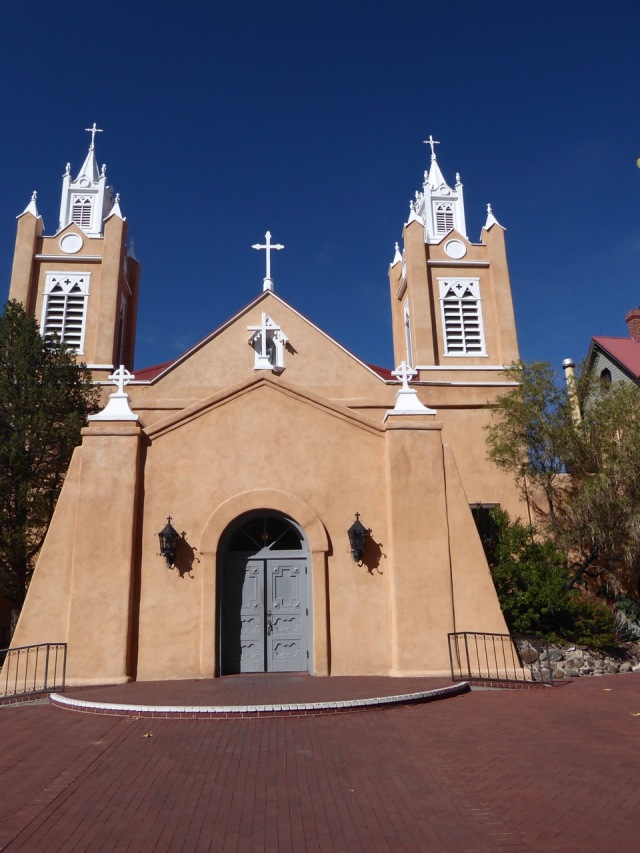 Albuquerque had been a last-minute diversion for us, along with our decision to go to Taliesin West instead of driving all the way down to Big Bend National Park in Texas.  In the end, we were glad we had made the detour, spending time in a city that surprised us with its striking views, moderate temperatures and wide range of outdoor activities.  Given its proximity to Santa Fe and Taos, I’m sure we will return here in the future. 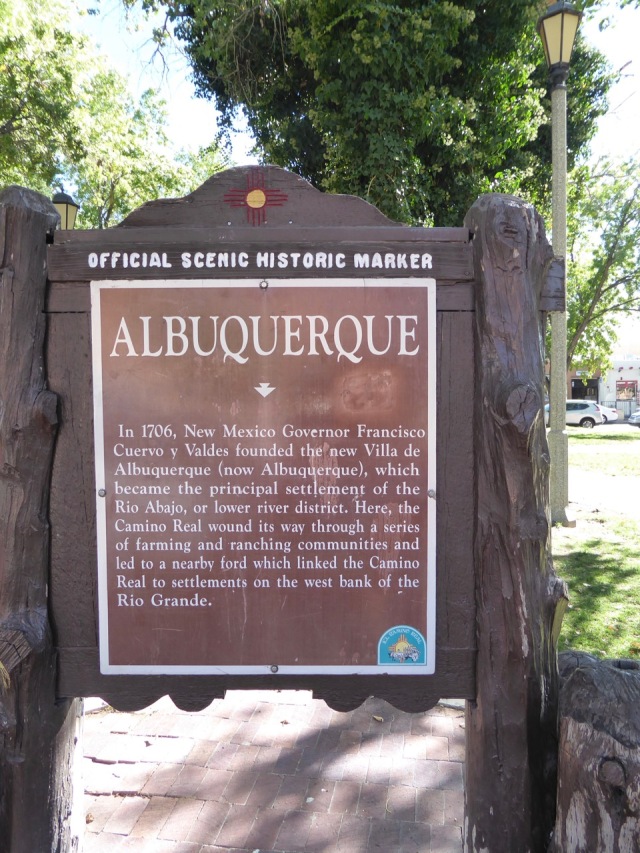