The agenda for our last day in Atlanta was simple; head to the Georgia Aquarium and arrive when it opened, thus gaining access to a discounted rate, saving about $10 apiece from the general admission price if we purchased the tickets on-line in advance. Alex printed them out for us that morning and thus we took off walking to the Inman Park-Reynoldstown Station Marta station.

We bought one round trip ticket at $5 apiece and after boarding the westbound Blue line, arrived less than ten minutes later at our stop, the Dome-GWCC-Philips Arena-CNN Station. This is the heart of downtown Atlanta, adjacent to the Georgia Dome (and it’s under construction replacement, Mercedes-Benz Stadium), Philips Arena, CNN and the Georgia World Congress Center (GWCC). 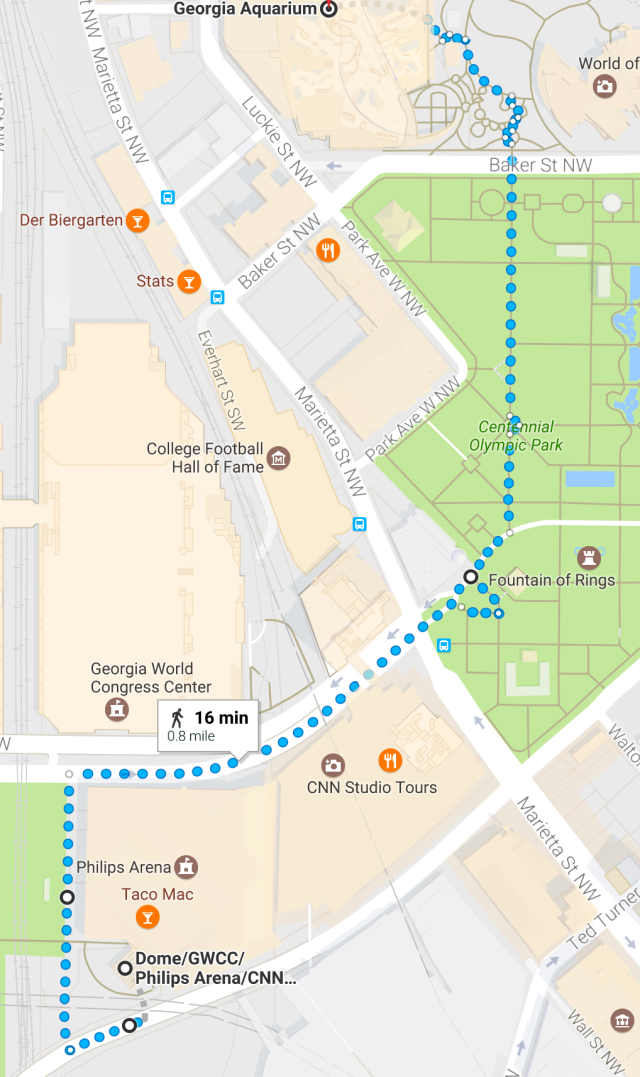 We exited the station, looped around Philips Arena and jogged right up Andrew Young International Blvd to head towards Centennial Olympic Park. On the way we passed dozens of people, many speaking foreign languages, with nametags on lanyards all heading for the GWCC); we’d find out later it was for a food products conference. 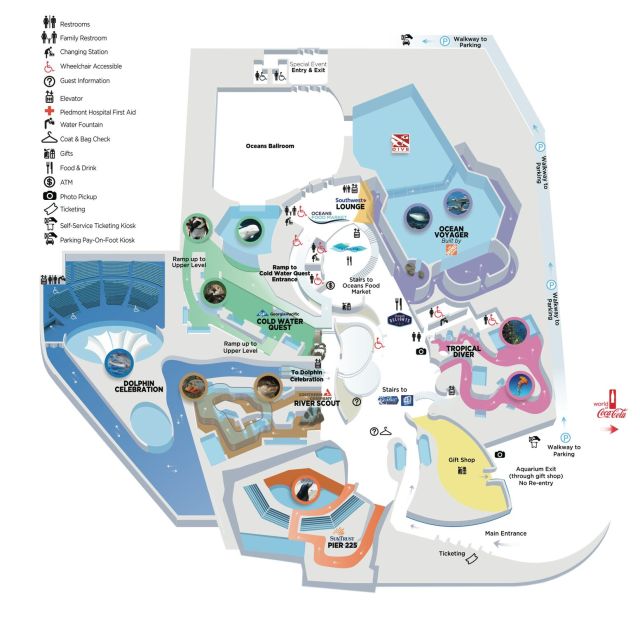 Soon enough we were queued up for our entrance into the Aquarium, where we would eventually spend over four hours, hitting every exhibit in the building. We let the timing of scheduled presentations (dolphins, penguins, feeding of the whales, etc.) to determine where we would go next, using the time in between to view the themed displays (Cold Water Quest, Ocean Voyageur, etc.). 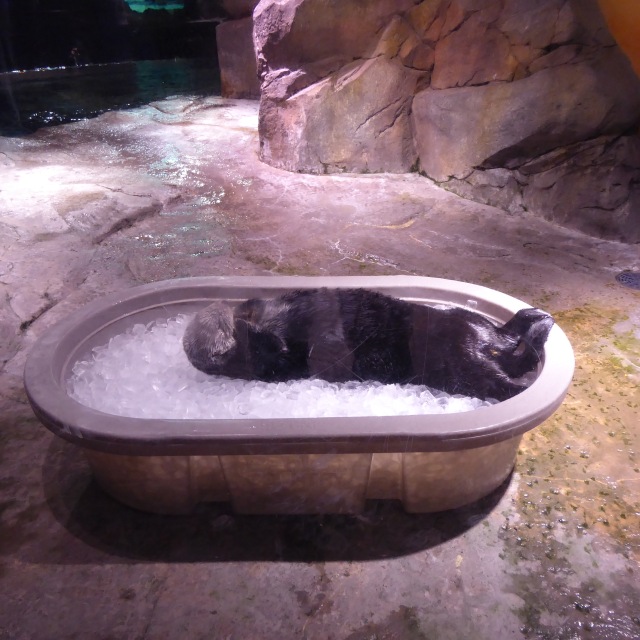 About an hour into our stay, the place became mobbed with school age children attending on school day field trips. While it made the lines longer and the place a bit more chaotic, the energy and enthusiasm they brought to the day lifted our spirits and when they all departed back to school, it became almost ghostly quiet and we found we missed the buzz they had created. 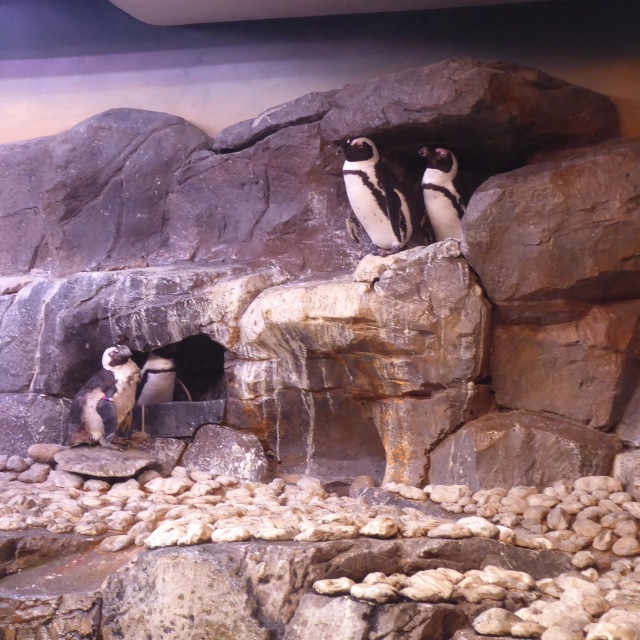 Highlights beyond the normal fun of seeing hundreds of fish and other water oriented creatures in a habitat, while not natural, at least mimicking their home environments, were the two big shows featuring the dolphins (Dolphin Celebration) and the seals (Sea Lions Under the Boardwalk).

Also enjoyable was a surprisingly entertaining short feature, Ice Age: No Time for Nuts 4-D in the Funbelievable Theater. This venue shows 3D movies while you sit in interactive seats that feature scent, wind, and sound effects that are synchronized to the film.

Ice Age No Time for Nuts

Around noontime we stopped for lunch at a temporary food stand, the main dining concourse being renovated, where we shared a ham and cheese sandwich, bag of chips and a bottle of Coke Zero for a theme park priced total of $16.36, expensive but it got us through the rest of the afternoon. Around 3pm we completed the last of the exhibits and feeling like we’d seen enough, departed the aquarium for our next destination, the CNN Center and a tour there. 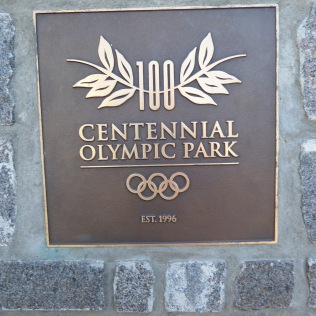 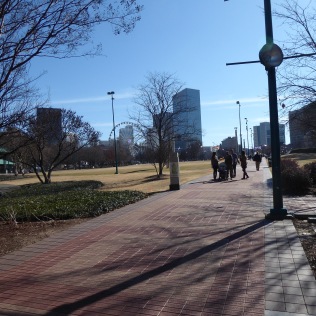 We walked back through Centennial Olympic Park to enter the Center, an impressive edifice as I’ve ever witnessed. Opened in 1976 as the Omni Complex, it originally offered office space to various business tenants, as well as consulates over the years. The main floor featured an indoor ice-skating rink, as well as an indoor amusement park called The World of Sid and Marty Krofft, inspired by the creations of the popular children’s television producers. One notable feature still existing today is the atrium escalator that is used to transport visitors on the CNN tour. It is listed in the Guinness Book of World Records as the longest freestanding (supported only at the ends) escalator in the world. 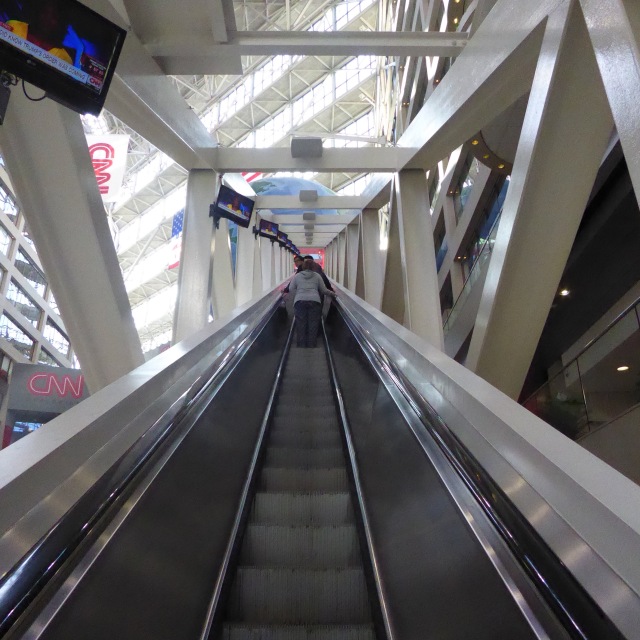 Over the years CNN moved more of its production and office functions into the building, but in later years shifted its entire weekday anchors and some editorial staff from Atlanta to its operations in New York and Washington, D.C. Currently, no weekday CNN programming originates from Atlanta except for its digital operations, content-subscription service Newsource, HLN, and sister channels CNN en Español and CNN International. 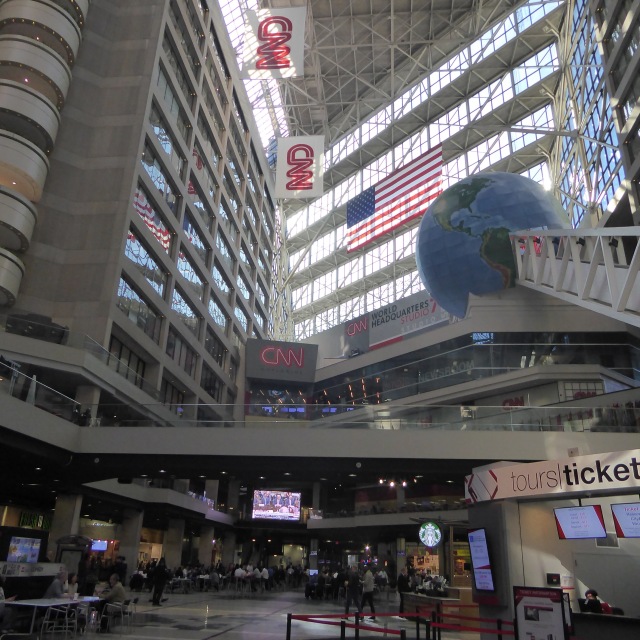 We chose the basic tour, not being sure if the VIP option at almost twice the price would be worth it. For what we paid, we thoroughly enjoyed our selection and commented afterwards that the more expensive version would likely be worth it as well. We left the CNN Center and made our way a few blocks away to the Westin Hotel for a recommended visit to its Sundial Bar. Sitting on the 72nd floor, the bar rotates slowly around, providing a 360-degree panorama of the Atlanta skyline. 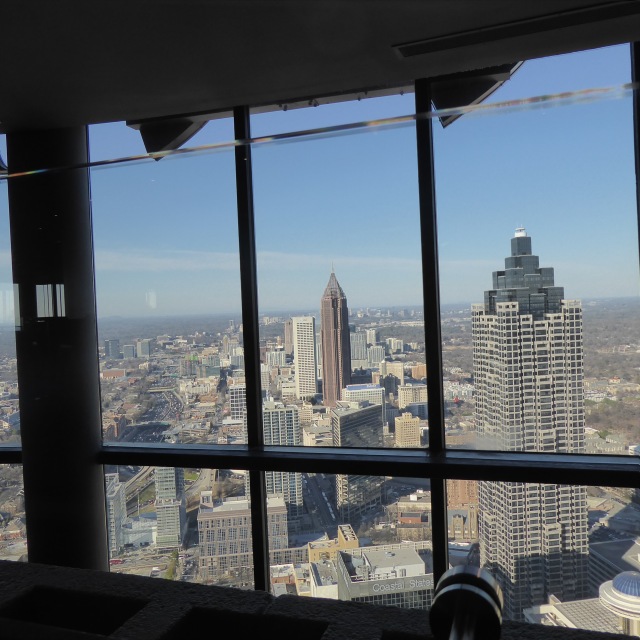 From the Westin Sundial Bar

Seated and resting after what had been a long day on our feet, Joanna ordered a Georgia Peach Martini (Ketel One oranje, peach schnapps and orange juice) and I a Magnolia Chardonnay. We savored our drinks, pointing out various Atlanta landmarks as they passed by the windows in a lazy fashion. Not a completely clear day, a hazy sky found so often in crowded urban areas reliant on the auto for transportation clouding our view, we could still pick out places we’ve been to in our short stay.

We settled up and headed off to our final destination of the day, Happy Hour at McCormick and Schmick’s. My first visit to one of these was during, and after as an alumni, grad school at Loyola Marymount. We’d gather at the Redondo Beach location to eat, drink, and rehash classwork, or reminisce about our times as students. Food quality and pricing has remained consistently good and it was just the place for us to finish up our stay in town. 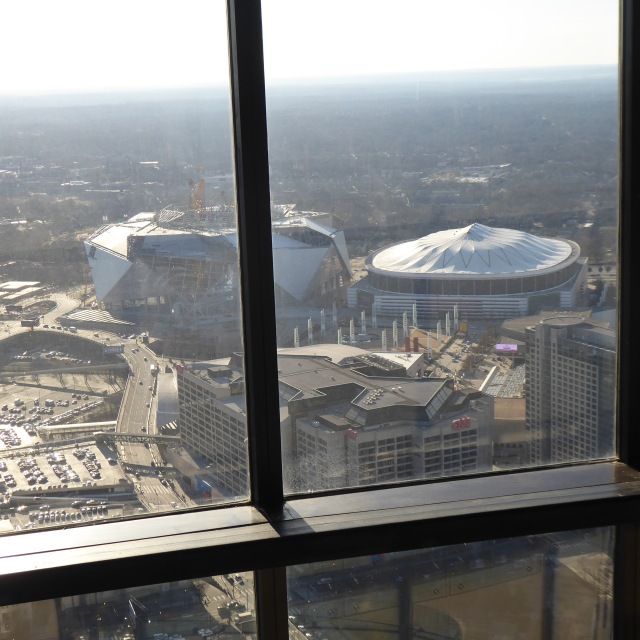 It was packed when we arrived and we were lucky to snag two seats at the bar just as someone was leaving. Joanna ordered the Agave Margarita ($7) and I a house Chardonnay ($6) along with a Chicken Lettuce Wrap (marinated chicken and Asian style Pico de gallo) and the Ahi Tuna Poke (Sushi Rice, Green Onion, and Avocado) each at $5 per serving.

We bantered a bit with the very busy bartender and ordered a second round of drinks and a final bite to eat, the Baja Fish Tacos with Southwest Jicama Slaw ($5). These were the best of the three things that we had ordered, two large tacos, fresh flour tortillas filled with a generous portion of moist white fish and a slightly tart slaw to offset the crema that topped each. We settled up our tab, $44.70 not including tip, for four drinks and three good-sized portions of food. 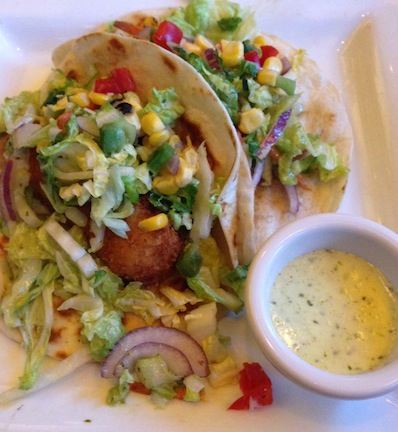 A quick ride on the Marta took us back to our stop for the short walk back to 49 Waverly. With no need to get up early for the drive home the next day we stayed up reading. Arising at our normal time the next day we packed and loaded the car and then drove back over to the Marta station to stop in at a joint we’d spotted earlier, Proof Bakeshop. 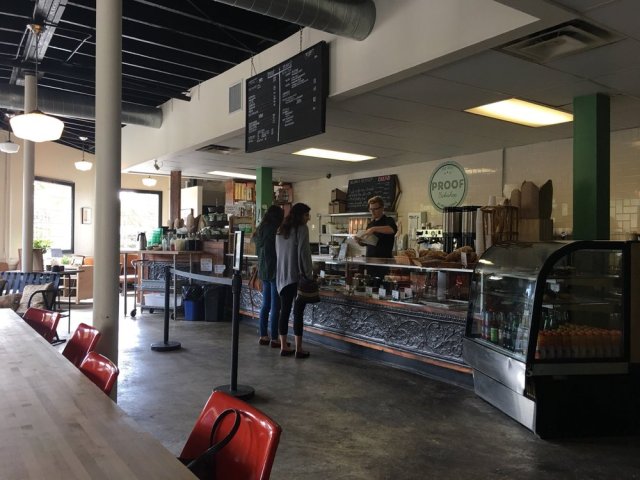 We ordered a tall latte and a cashew bar, both so good we were genuinely sorry we hadn’t discovered the place earlier in the trip, as we would have stopped in more than once. Back in the car the four-hour drive home went smoothly. When we arrived we were delighted to discover that for the first time in many trips, some small house based disruption (water heater, etc.) had not occurred and we could quickly resume our normal activities. 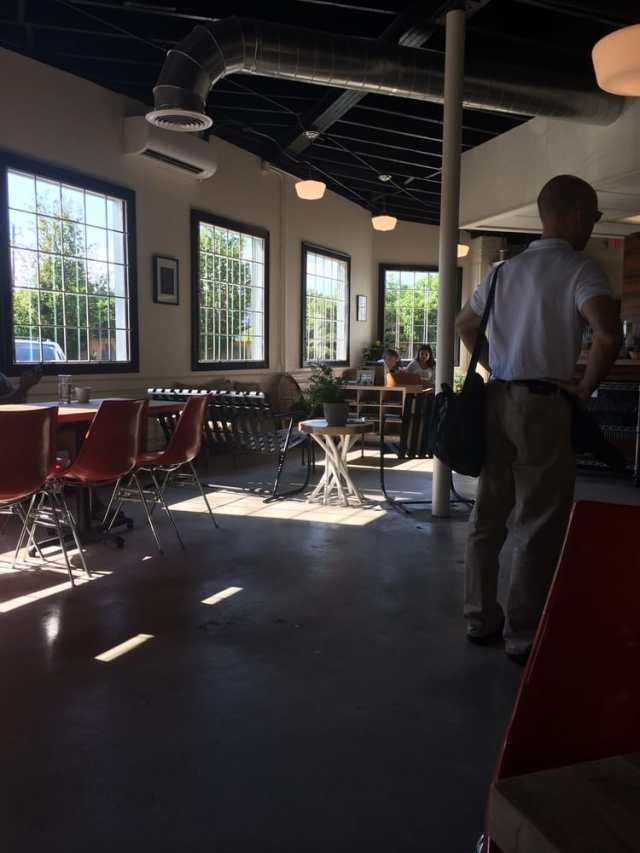 Our trip to Atlanta had been more successful than we could have hoped for, filled with good food and drink and a wide variety of undertakings, ranging from historical, to scientific, to whimsical. With 49 Waverly as a base, or the homes of some friends, Atlanta could beckon again soon. 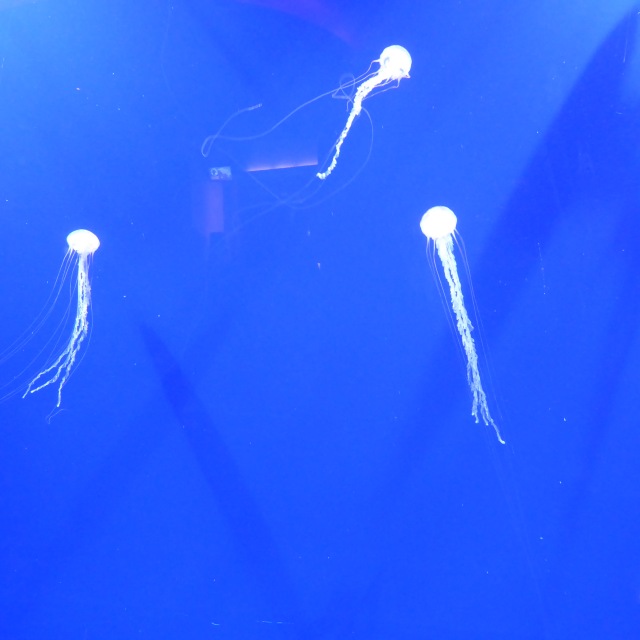