This trip would be another quick hitter, ten days in total, to include a few days at the ACUI Conference in Philadelphia (potentially the last I’ll attend), a day in Baltimore with Nephew Jed, and then two nights on Chincoteague Island where we’d hopefully get to see some wild horses.

As in years past I’d room with my former boss Jim at the Downtown Marriott Philadelphia and then on Tuesday decamp to an apartment I’d rented through Airbnb to finish out our stay. Joanna would join me that day, having flown to New Jersey to spend a long weekend with her friend Janet.

I picked Jim up at his house at 7:30am Saturday morning in the BMW, looking forward to spending a week or so driving as we rarely travel with it, usually opting for the Highlander given its overall versatility. The nine-hour plus drive went smoothly until we entered the last two miles, a long slog up Broad Street, heavy traffic, a light at each block, rarely hitting two greens in succession. 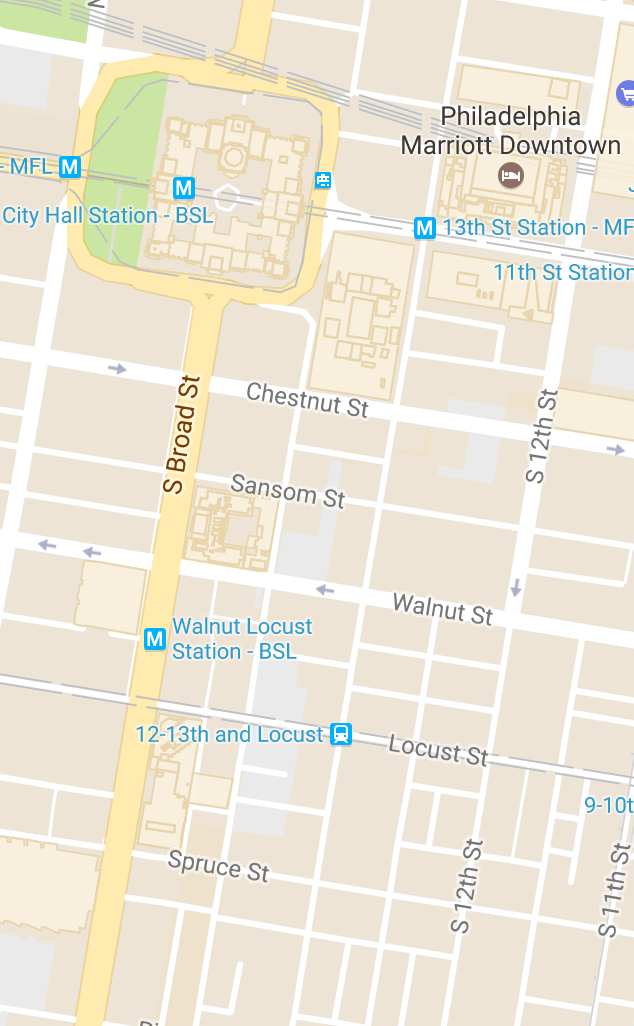 The GPS sent us to the back side of the hotel and we spent nearly thirty minutes stuck in gridlocked traffic, negotiating the maze of one way streets, blocked by city trucks spreading salt (blizzard like conditions had hit the city earlier in the week) until we finally managed to pull up in front of the Marriott. Not quite blocking the entry driveway was a large tour bus; as traffic cleared and I started my turn into the property the bus started moving and just inches away from the front quarter panel of the car, we got the driver’s attention and he waved us in, sparing me an expensive repair job. 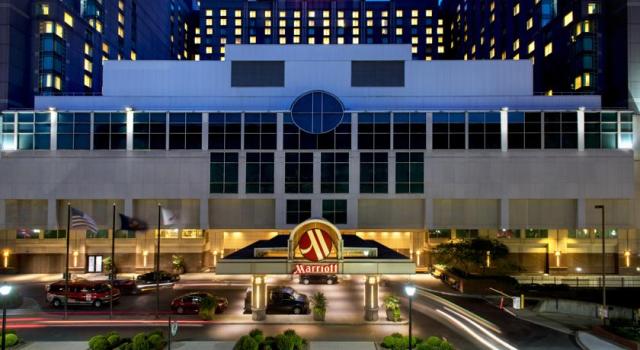 During our run-up to the hotel we’d noticed a garage charging $39 a night for parking, somewhat high we thought until we turned over the keys for valet parking at the hotel to discover it was $59 a night. Check-in went relatively smoothly until the clerk informed us he couldn’t split the bill the way we wanted, blaming it on how the rooms were contracted for. This seemed a bit far-fetched, a matter we’d resolve the next day with someone more inclined to offer what is really just rudimentary customer service.

Checked in and a couple of Jim’s favorite drinks, gin and tonic using Bombay Sapphire under our belts, we set out for dinner at Square 1682, in the Kimpton Hotel (a boutique chain) a half miles walk away. It being a Saturday night, I’d spent some time in the car checking out dinner options, finding most of our first choices filled up. So, we landed here and enjoyed a good, but not outstanding meal. Jim ordered the Scottish Salmon (Salmon with skin on, Squid escabeche, sautéed fingerlings, and melted leeks) and I the Amish Chicken (Breast and leg, Charred carrots, baby kale, parsnip puree, and rosemary jus).

The chicken was nicely done, with a pan crisped skin and moist meat. I wasn’t knocked out by the assortment of root vegetables that also sat on the plate and in the end, felt that at $26 for the dish I should have liked it a whole lot more. We hustled back to the hotel, it being cold out with the wind intensifying the effect; it had snowed the week before with piles of dirty remnants to dodge as we crossed several streets. 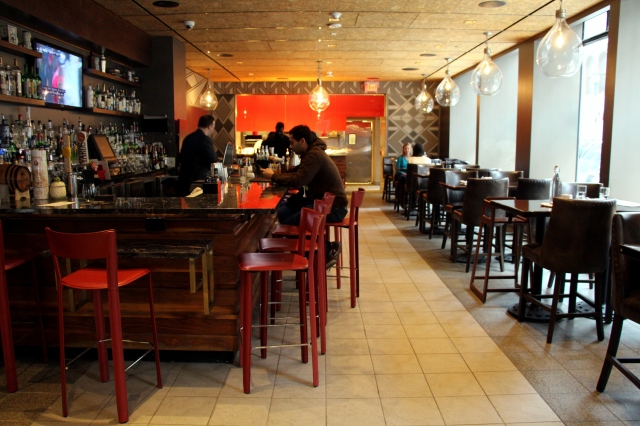 Seating at the HIgh Tops

The next day, preparing for a long afternoon and early evening before dinner, we walked across the street to the Reading Terminal Market for lunch. Occupying the ground floor and basement levels of the Reading Railroad’s Main Terminal and former train shed, which were built in 1869 on the site of an open-air market that lasted in that location for many years, the market and terminal co-existed until the Reading Terminal handled its last train on November 6, 1984.

Being Sunday, it was packed with wall to wall people, many queued up at their favorite food spots waiting to order. With over one hundred merchants offering everything under the sun (fresh produce, meats, fish, artisan cheese, groceries, ice cream, flowers, grilled cheese, baked goods, crafts, books, and clothing) we found ourselves in a quandary, the choices overwhelming, producing a buyer’s paralysis. 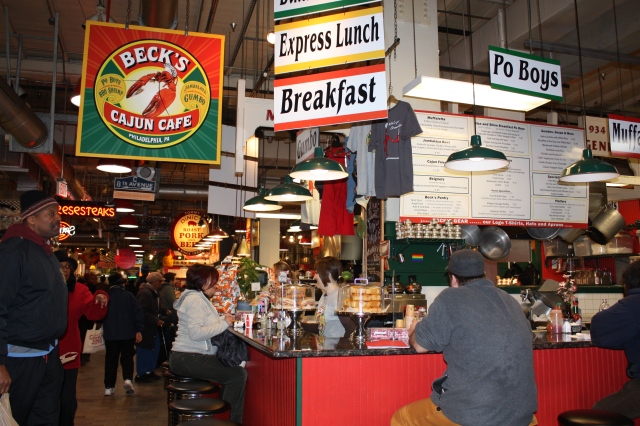 So, we opted for one of the few that had seating as a component, Beck’s Cajun Café, with two open stools tucked up against the counter. As luck would have it, we sat down next to another of our student union professionals, Tim from NC State, who was working his way through a nice-looking bowl of Jambalaya. 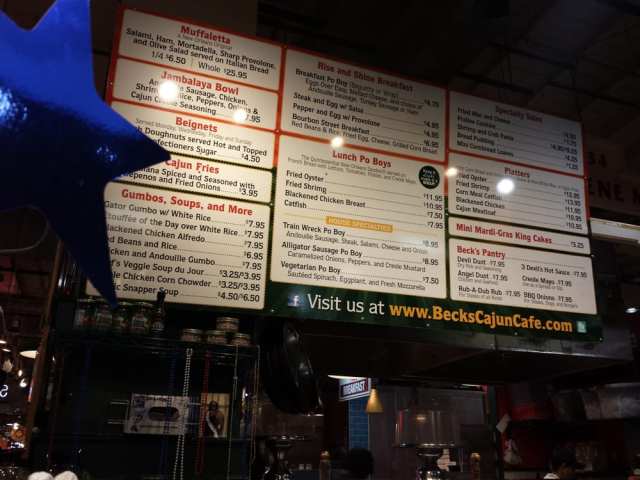 I ordered a Blackened Chicken Breast Po Boy, served on very good French roll with lettuce, tomatoes, pickles, and creole mayo and a good-sized cup of the Creole Chicken Corn Chowder (Spinach, celery, carrots, corn, and chicken in a light tomato broth). Jim ordered the same thing, substituting sweet potato fries for the soup. The sandwich was big, with layers of thinly sliced chicken spilling over the top of the bun, making dignified eating a challenge. Having polished off the soup, I found I could only eat half of the sandwich, opting to take the rest back to the hotel for a snack later.

Later, after the first event of the conference, regional meetings, we had a short break before heading over to the University of Pennsylvania for the opening events of the conference. This gave us time to indulge in a couple more gin and tonics and, suitably refreshed, we hopped on a shuttle bus that took us the two miles to the Irvine Auditorium.

Opened in 1929, it contains the 11,000-pipe Curtis Organ, ranked 22nd in the world against others of its ilk. It’s an impressive building and delight to spend time in, a refreshing change from spending a couple of hours in a hotel ballroom, our usual venue for this type of activity.

After the opening program we walked onto the campus for our dinner event at Houston Hall, completed in 1896, it was the first student union built on an American college campus and is listed as a National Register of Historic Places. With the NCAA Basketball tournament broadcast on a number of flat panel TV’s we lined up for a buffet style meal of Philly Cheesesteaks (Chicken or Beef), some sides and bottles of beer from the cash bar. 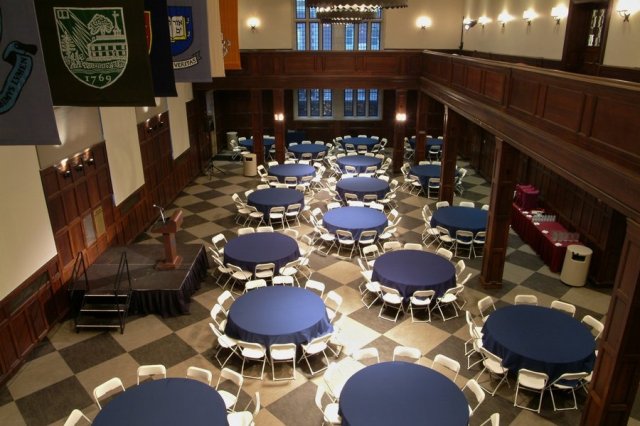 It had been a good start to a planned week in Philadelphia, spending quality time with Jim, something we don’t get to do too often, a long ride in the BMW, a hectic drive into the Hotel all made better by those Bombay Sapphire Gin and Tonics. I had a feeling it would be a fine week.

It’s What Makes the Drink