As planned, our last day in Chincoteague started early with breakfast at the Best Western, than a drive into the refuge to park at the trailhead for the Marsh and Wildlife Trails. We opted to start with the Marsh Trail, a short half mile walk that took us out into the heart of the bog, as the trail’s name so implies. As we started we walked through downed forest, a result of an ongoing mitigation campaign to arrest the spread of the Southern Pine Beetle.

Considered to be the most destructive insect pest of pine in the southern United States, studies show that between 1960 and 1990 it has done an estimated $900 million of damage to pine. This aggressive tree killer is a native insect that lives predominantly in the inner bark of pine trees; once it has successfully colonized a tree it cannot survive, regardless of control measures. 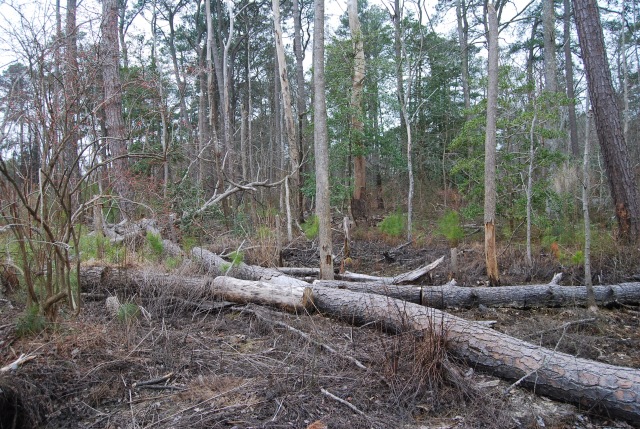 It was a cold and miserable morning, drizzling gray skies with the slight silver lining that it wasn’t pouring down rain. We completed our circuit of the marsh, returned to the car and drove a short distance to the parking lot for the quarter mile walk to the Assateague Lighthouse. Originally, no light existed between Cape Henlopen, Delaware and Cape Charles, Virginia. In 1830 the United States Congress appropriated money for a light in the general vicinity of Chincoteague Island. 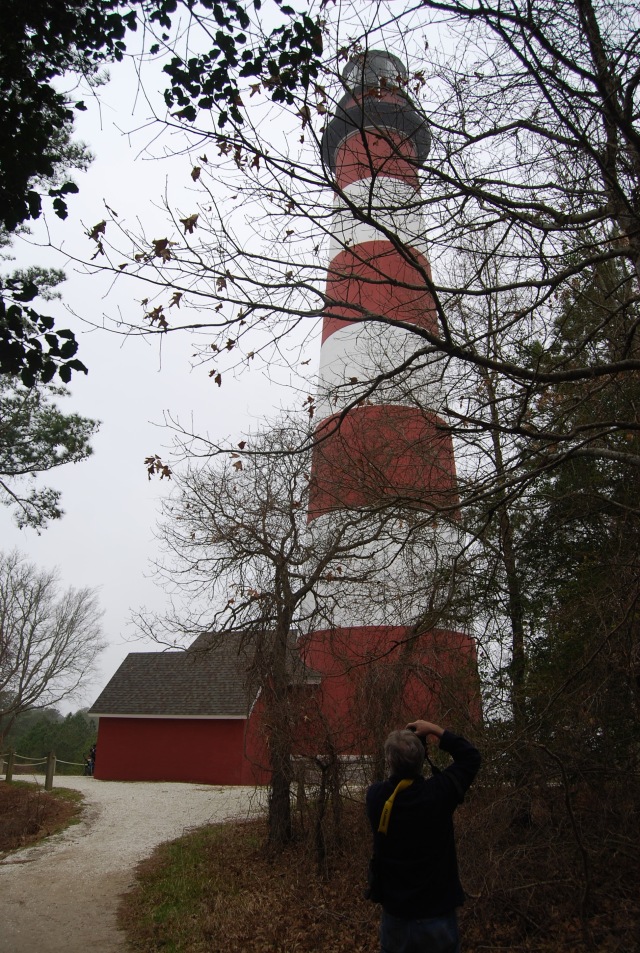 In 1833 the original lighthouse was built on the southern tip of the island, but since barrier islands shift and change, the island has grown approximately 5 miles since the site was first designated. Over the years, a hook has developed to the south and the cove created by that hook has been gradually filling with sand. In 1867 a new lighthouse was constructed further inland to replace the original. Conical in shape and painted in alternating bands of red and white, it was designated as a National Historic Site in 1973 and $1.5 million renovation was completed in October 2013. 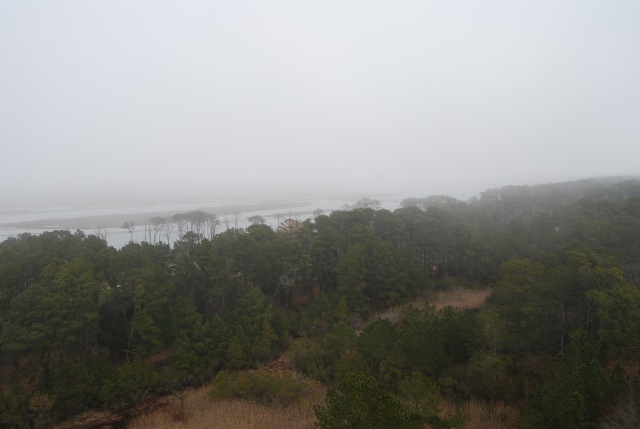 View from the Top

We walked up the 170 or so steps to the top, pausing at each of the six independent landings to read informational displays, some referencing the construction (built on a twelve-foot deep stone and concrete foundation with an exterior wall at the base is 28 inches thick and interior wall that is seventeen inches thick) with others relating the history of the lighthouse. On each landing, four north facing and three south-facing windows light the interior and feature a opening between the walls to aid in ventilation.

Finished, we drove to the trailhead for the Woodland Trail; a 1.6-mile loop that we hoped would bring us a glimpse of some ponies. A third of the way in, as we looked across a large marsh, we spotted a small group of ponies in the distance, too far away to get a good picture without a telephoto lens. Later, we passed a couple and their children going the other way and the husband advised that we could see ponies close up if we kept on the lookout for some “bamboo” and turned in there. 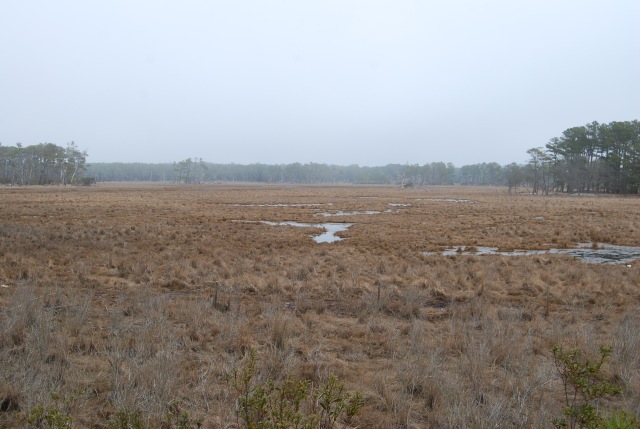 Ponies Way in the Distance

Needless to say, we didn’t find any bamboo and didn’t see the ponies again. Towards the end of the loop we took a detour on the Bivalve Trail to catch a glimpse of the sea, one lonely boat not far from shore fishing. Returning to the car, we drove back to the Marsh and Wildlife Trailhead, parked and started down the Service Road, starting in path in reverse to finish up our day. 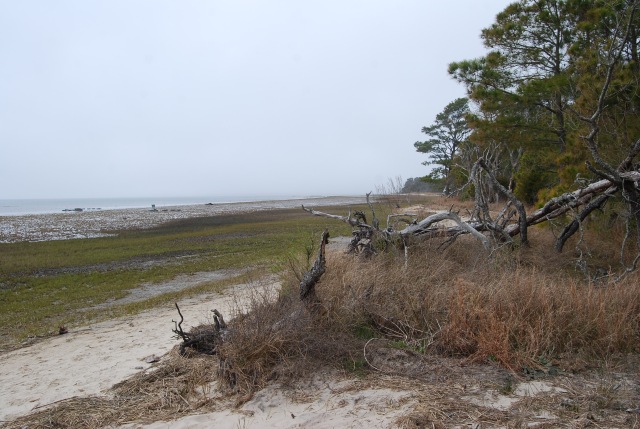 We ended up doing a couple of miles round trip, a boring hike made slightly more difficult by a strong headwind and chilly conditions. The open wetland surrounding us looked as if it had been plowed and curious about whether it was natural or man-made, we stopped in at the Visitor’s Center to inquire (they were plowed as a way of improving the natural circulation of the tidal action) and caught one last pony video. 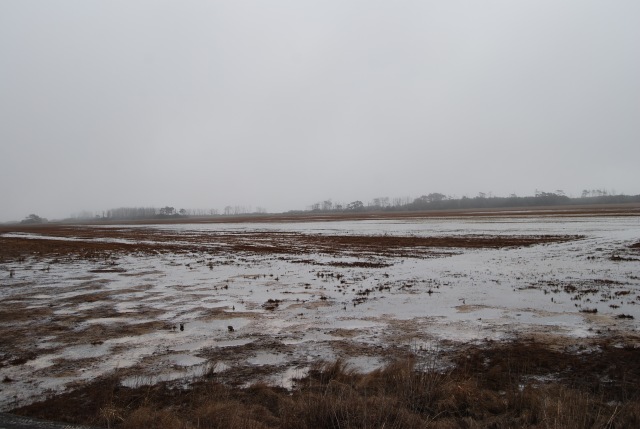 Joanna also asked about getting a closer look at some and was told that there is often a number that are penned at the fairgrounds just off Main Street.

No Problem for Us

Done hiking for the day, we drove back to Main Street and found the fairgrounds, parked next to a chain link fence and got a good look at four ponies grazing in the lot. Not quite viewing them in the wild, but good enough to put the finishing touches on our day. On the way back to the Best Western we stopped at one of the few quickie marts open that time of year and purchased a reasonably priced bottle of white wine.

We’d made reservations for a nice meal at Bill’s Prime Seafood and Steaks on Main Street. When we arrived just a few folks were seated, reflecting perhaps the early hour (6:00pm on a Sunday) or the off-season. It certainly wasn’t because of the food, which we would appreciate throughout our delightful dining experience.

Our engaging waitress provided us with excellent service and friendly conversation as we ordered a bowl of New England Clam Chowder to start and the Broiled Seafood Feast (flounder, crab imperial, shrimp, Scallops, roasted clams and oysters) to split along with a bottle of Tangent Sauvignon Blanc from Edna Valley, California (just outside of San Luis Obispo).

As is often the case, even with splitting the entrée we had ordered more food than we needed to. By getting a separate bowl of the clam chowder we were entitled to a salad, which was larger than anticipated and when coupled with the large loaf of warm in-house bread that came out with the salad and soup actually presented us with enough to eat altogether. 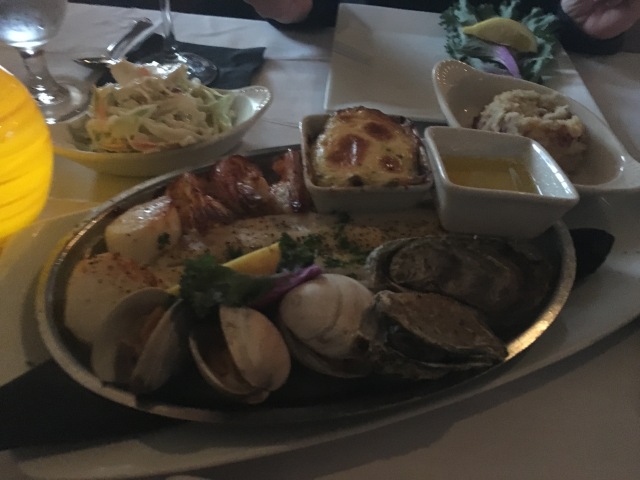 But we stepped up and did our job, finishing the large plate of perfectly cooked pieces of seafood, leaving little on the plate but a few pieces of stray garnish. Too full to order dessert, we settled up the tab, which was $71.15 not including the tip, pretty good for a filling meal of quality food and a bottle of wine. When I got back to the room I took a closer look at the bill and realized that I had miscalculated the tip, leaving the waitress short by over ten percent.

On the way home the next morning we stopped in at the restaurant and left the tip difference for the waitress with the manager. The drive home went smoothly, with a well timed stop at a Krispy Kreme shop two hours into the journey as we changed drivers and prepared to get on the interstate for the final push to Charlotte. It was a great way to finish out what had been a very good weeklong trip, full of memorable places, food, and friends. The next couple of months would bring more of the same, but for now we could appreciate what a good time we had experienced.