Not much time elapsed after our return from the Philadelphia trip before we found ourselves preparing to board a flight to San Francisco for one of our regular ten-day runs to see Jessica and Kris.  Followers of this blog are by now familiar with this routine; fly into San Francisco International (SFO) on a Thursday due to the abundance of non-stop flights from Charlotte, spend four nights in Oakland with Jessica and Kris, depart on Monday for some destination, recent trips including Yosemite, Kamp Angst, North Coast Redwoods, etc.), and return for four more nights in Oakland before returning home, generally on Monday.

When booked, our original flight was to leave early in the afternoon, getting us into SFO around 5pm, putting us into Oakland a couple of hours later after retrieving our bags and taking BART across the bay.  The flight was changed to a 4:30 departure, arriving at SFO around 7:30, still not too bad in terms of timing.  We took Lyft to the airport (it ends up being less expensive this way than paying for parking now that prices for long term are close to $7 a day).

Check-in went smoothly as did clearing TSA as we enrolled in the Pre-Check/Global Entry program last year.  Given how much we fly this will save us a lot of time and trouble at the airport in terms of length of wait in the TSA lines as well as not having to remove shoes, belts, etc.  The application process is simple; If you believe you will not travel much internationally you only need to apply for TSA Pre-check.  The fee is $85 and it is good for five years.  If international flying is in your future, go instead to the Global Entry site where you create a GOES account, then fill out an application and pay the $100 fee, also good for five years.

If your application is conditionally approved, you will be instructed to schedule an interview at a Global Entry Enrollment Center, which is usually the US Customs Office at an International Airport.  This can be a minor catch for some applicant, as their local airport may not have a customs office.  If all goes well and you are approved, you will now have not only enhanced entry into the US (no processing lines, no paperwork to fill out and access to expedited entry benefits in other countries) you also receive TSA Pre-Check as well.

We cleared TSA and entered the main concourse with plans to eat, as it would be a long time until we arrived at the apartment in Oakland, longer in terms of our body clocks with the time zone change.  We encountered a very crowded scene, with nearly every table occupied as we tried to find seats after order a burrito apiece from Salsarita.  We eventually sat and ate and then walked to our gate, at the end of terminal B. 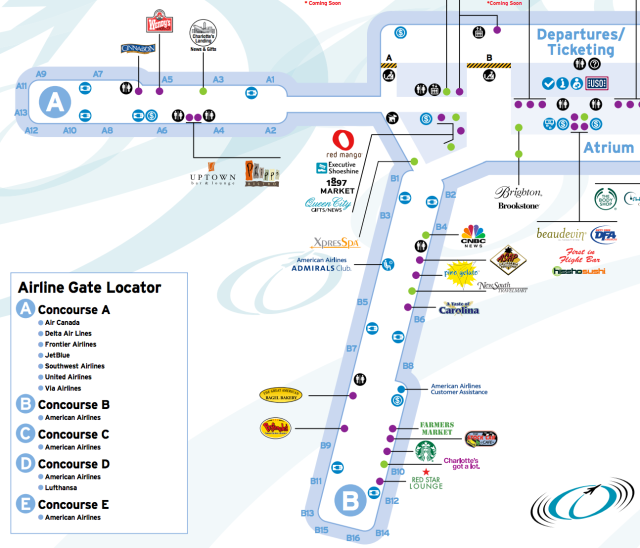 Halfway down we glanced at the American Airlines service counter and saw a line that stretched down the hall almost to the end of the terminal.  It was then that we realized the reason for the crowded concourse; extreme weather on the east coast had disrupted flights throughout the system, creating havoc at affected airports.  Charlotte is one of American’s largest hubs and bore a significant impact from delayed and cancelled flights.

The good news for us was that it appeared our flight was on time.  We boarded at the appointed time and settled in for our five-hour flight.  But nothing happened.  Time slipped by and at about 20 minutes in a flight attendant came on the intercom and announced that our pilots were delayed coming into Charlotte but were expected to arrive in 5 minutes.  Another 20 minutes went by when the announcement was made that the delay would be longer and that it would be best if we deplaned and waited in the terminal for our pilots to arrive.  We did so, killing time at a Heineken kiosk drinking a beer apiece, then re-boarded when were called.

Not long after the process was completed, the pilot came on the intercom to announce that his co-pilot had ‘timed out’ and would need to be replaced.  More time elapsed as we waited for the substitute who eventually arrived and we finally pulled away from the gate.  As we taxied out to the runway and lined up to depart, the pilot came on the intercom yet again to announce that due to the delays, the prevailing winds had shifted and the control tower was going to ‘turn the airport around’, meaning that all planes on the runways would have to turn around and take off in the opposite direction.

This took some time but eventually we lifted off, well over three hours behind schedule.  Weather all the way to California created turbulent conditions, limiting drink service which is a good thing as they didn’t charge me for the serving of Jack Daniels I ordered; extended service negatively impacted my ability to expediently get us to Oakland once we landed.  Arrival at SFO was scary with heavy rain and clouds obscuring visibility, high winds rocking the plane, and finally a hard touch down, made acceptable by the fact that we had at least landed safely.

Our luggage came off the conveyer belt in a timely fashion, but by now it was well after 11pm.  Our original intent had been to take BART to Oakland, but given that it was now 2am body time, we opted to use Lyft to make the journey; sometimes it’s just better to take the easy solution.  Traffic was heavy going over the Bay Bridge, weather conditions slowing down vehicles.  A vivid memory is glancing out the window of the car, the side supports of the bridge illuminated by spotlights, highlighting waves of wind whipped rain coming over the sides and onto the roadway.

Deposited safely at Kris and Jessica’s, we wasted little time in preparing for bed, since we were tired and they needed to get up for work the next morning.  We’d had an eventful first day of travel, but one that had resulted in a good outcome for us, reaching our destination safely if a bit late.  I thought of the many travelers stuck in airports around the US hoping for a successful resolution and was glad we were not part of that drama.  Sometimes it is better to be lucky than good.