As mentioned in the prior post, my field trip would be out to Frank Lloyd Wright’s Kentuck Knob (Hagen House).  Faithful readers of the blog will recall our interest in this true American Genius and as we’d visited his Fallingwater the last time through, I was very interested in seeing this entirely different house. 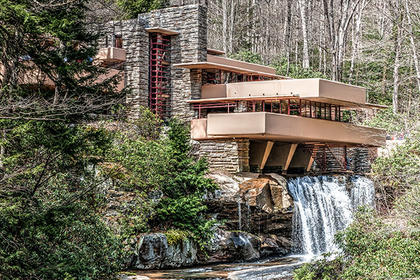 Kentuck Knob began in 1953 when the Hagans, owners of a major dairy company in Western Pennsylvania, purchased 80 acres of mountain land east of their native Uniontown. As friends of the Kaufmanns, owners of nearby Fallingwater, the Hagans asked their architect Frank Lloyd Wright, then 86 years old, to design a deluxe Usonian home for them. The house was completed in 1956, and the Hagans lived at Kentuck Knob for almost 30 years.

In its construction, Wright employed tidewater red cypress, glass, and native sandstone to build the home, and capped it with a copper roof at a cost of $96,000.  At 86, and hard at work on the Guggenheim Museum in New York, the Beth Shalom Synagogue in Elkins Park, Pennsylvania, and about 12 residential homes, Wright said he could “shake it (Kentuck Knob) out of his sleeve at will”, never even setting foot on the site, except for a short visit during the construction phase.  This was one of the last homes to be completed by him.

Overhang and Cutouts for Lighting

“Usonian” is a term usually referring to a group of approximately sixty middle-income family homes designed by Wright beginning in 1936.  These typically are small single-story dwellings without a garage or much storage and often L-shaped to fit around a garden terrace, they are characterized by native materials; flat roofs and large cantilevered overhangs for passive solar heating and natural cooling; natural lighting with clerestory windows; and radiant-floor heating.  A strong visual connection between the interior and exterior spaces is an important characteristic of all Usonian homes. The word carport was coined by Wright to describe an overhang for sheltering a parked vehicle.

The house is currently owned by the Palumbo family, who occupy it from time to time and unlike other Wright properties, this one was full of the touches that make it a home; pictures of the family, interesting objects of art, and other various personal effects.

The Hagen’s battled with Wright, as many of the owners of houses he designed did, to include features he thought useless, such as a basement to hold the property’s heating and cooling equipment or a dining room table (custom built and installed) that would seat more than four people.

We finished up the tour and walked back to the visitor center via a wooded path that wound downhill through the properties sculpture garden.  The shuttle back to camp made a stop in Ohiopyle (home to Wilderness Voyageurs, our tour outfitters) for lunch, baked chicken and a number of salads and some time in their store window shopping the outdoor merchandise.

Apple Core in the Sculpture Garden

We would fortunately have dry weather conditions the next couple of days as they would be long ones in the saddle.  Our next stage of the tour, from Confluence to West Newton would feature nearly sixty miles by ride’s end.  About twenty miles in we left the trail for a brief side trip to the small town of Dunbar to view the Seated Torso sculpture by the artist known as Pascal. 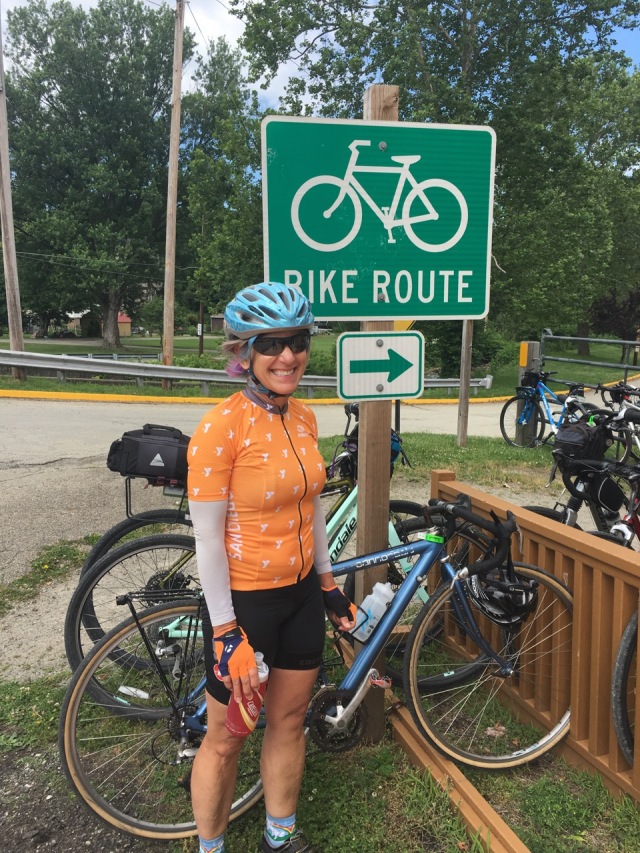 At Our Stop in Dunbar

Born in Miles City, Montana in 1914 and deaf until age eighteen, Pascal was never able to attend school. Her mother, whom she credits with encouraging her in everything she did, communicated with her through drawings.  The Torso began in 1961, when she heard that Dunbar’s Pennsylvania Wire Glass Co. was bankrupt and shuttered as the artist was on a decade-long search for glass durable enough for carving.

Tempered from years of exposure to Pennsylvania’s hot summers and cold winters, the Dunbar glass — used in windows, roofing and for other purposes — resisted splintering when struck with a hammer.  Pascal purchased a 4,000-pound hunk of the glass and spent 15 to 20 years carving the Seated Torso.  Originally purchased in 1994, it passed through a number of hands until it was returned to Dunbar. 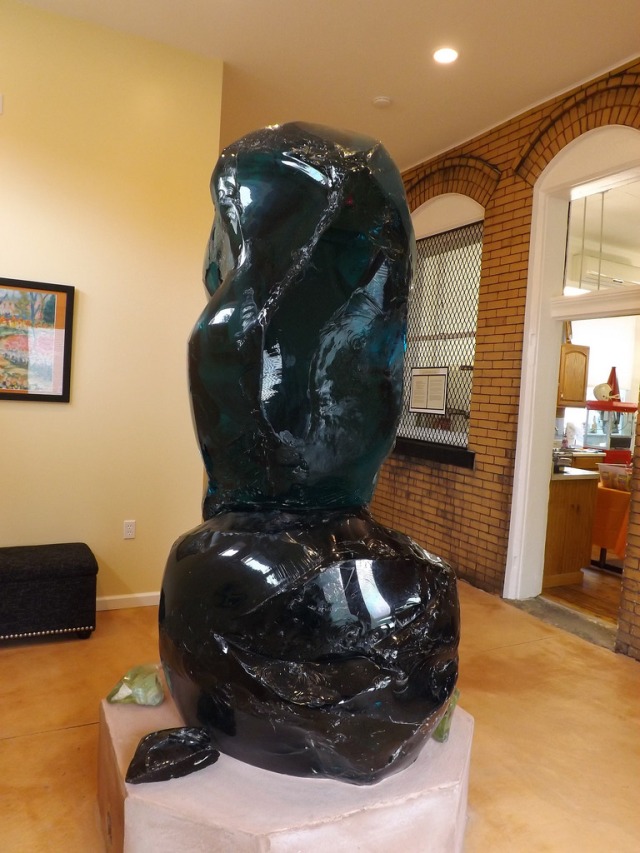 From a Different Angle

We returned to the GAP trail and kept on pedaling.  About twenty miles out from the end of the ride we came upon an older rider, Mike, who was riding a LIghtspeed Titanium bike similar to the one I had at home.  We would ride with him for the next two days, good conversation flowing as we pedaled along, helping to make the miles seem easier.  For some reason, my body was having a problem with the long hours in the saddle on the Poprad (the bike I was riding) and I struggled the last ten miles, gratefully pulling into the turnoff in West Newton, our stop for the night

Our Tent in Camp

We would have a fine time that night recovering from a hard day’s ride, having stopped on the way up the hill to camp to pick up a six pack of beer, and then later eating really good BBQ and drinking draft beer at $3 a glass from a local brewery.  With good weather forecast for the next day, we looked forward to another long day in the saddle, this time a little under 50 miles.  We’d be riding on a fairly new trail about 20 miles in, the Montour, and we wondered how it would differ from the GAP.  We’d soon find out.