The next thing we knew we were on our way overnight to Greece, arriving in Athens around 9am on the 25th.  This trip, though lengthy will not be as long as the one we did 2014, particularly since we discovered that Americans can’t stay in the Euro Zone for longer than 90 days without a country specific visa.  This time around we’ll spend a bit over three weeks in Greece, under a week with Francois at his new digs in Montpellier, then more than a month hiking on the Camino de Santiago in Spain, returning to Montpellier for around ten days with some side trips before heading to Barcelona to fly home on November 15th.

We cleared customs easily, a quick stop at passport control and out the door to the platform for the Blue Line metro to the center of town at 18 euros for the two of us, cash only no credit cards taken.  It is curious to me how many metro systems don’t take credit cards.  The ride in takes about 30 minutes, switching lines at the Syntagma station to go one stop on the Red Line to the stop at the Acropolis.

We’d be staying at the Hotel Phaedra, a Rick Steves recommendation and a good one given its reasonable price (80 euros) and very convenient location right in the middle of the Plaka.  As we walked up the crowded streets to the hotel, pedestrians, scooters, and cars intermingling, I couldn’t help but think of my one and only visit to Athens and Greece in 1979.

It came at the end of a two-year period in my life when I traveled and moved from place to place, mostly by myself, trying to figure out what my place in the world was after graduating from college, finding and losing a good first job (the company closed) and getting married and divorced.  Rendy and I had planned this trip as the follow up to our 1977 adventure; we started with the month of May in England, hitchhiking and camping in miserable conditions most of the time, wet and cold. 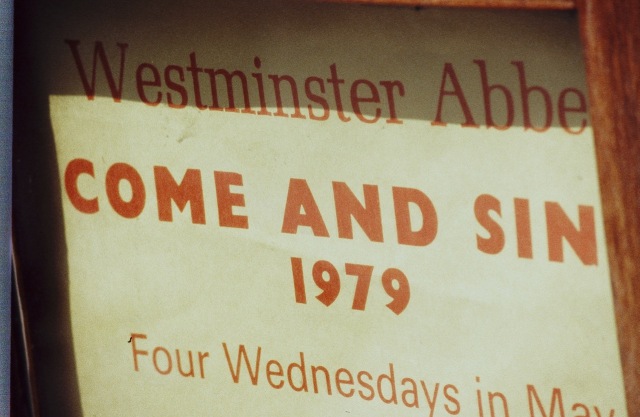 We moved on, taking an overnight Magic Bus to Luxembourg, thinking we’d get dropped at the city center when all they did was wake us up and dump us at an offramp somewhere out in the country.  As soon as we hitched into Germany we stopped at a store and got our first two bottles of good beer.

Just over the border into Germany, the land of great beer

Sometime later that day we made it to Idar Oberstein, Germany where we would stay for not quite a week, and then hitched straight through (Karlsruhe, Freiburg, Zurich, Bad Ragaz, Lake Lugano) to Milano and a month in Italy. 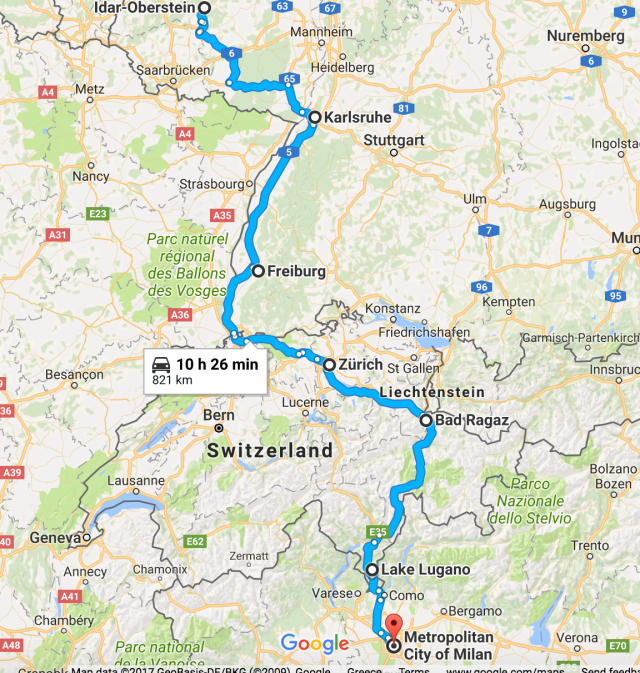 Our Route to Italy

By the time we reached Siena I’d lost most of my enthusiasm for the lifestyle, having come to the realization that constant travel and time alone were not healthy for me, that I needed the security of a home base and supportive friends and family around me in order for me to be fulfilled.

But I pushed on, ready to play out the rest of the trip; Rendy and I separated after Rome and soon enough I found my way on an overnight ferry from Brindisi, Italy to Corfu, Greece. 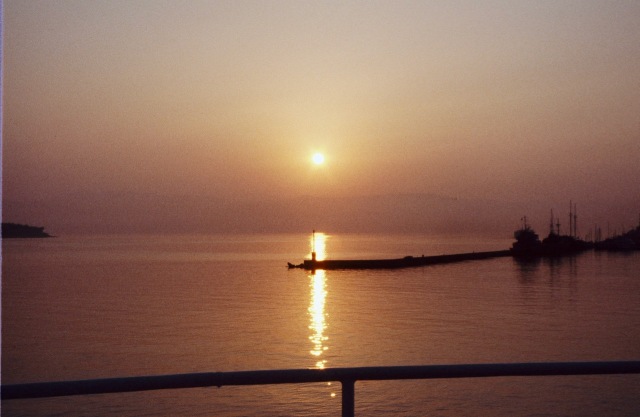 Sunrise Corfu Harbor from the Deck of the Ferry

I’d gone there because a random traveler we met at the youth hostel in Lake Lugano told us “if you are going to Greece you have to stop at Corfu and stay at the beach at Pelekas”.

The Beach at Pelekas

Those words would change my life in a meaningful way, as I did go there and met a number of folks while wild camping on the beach at Pelekas, Janis who now lives in Seattle and someone you’ve met a number of times in this blog, my good friend Francois.

That was a different Greece and a different me.  I was living on $7 a day (enough for that time period) and often looking for the least expensive option available in any given situation.  It was a Greece of little English spoken, undeveloped land, and crumbling infrastructure.  As I have grown and changed, so has this country, one example being language.  We’ve found that English is spoken everywhere, as Rich Steves says:

“You’ll find that most people in the tourist industry, and almost all of the young people, speak English.  Many signs and menus use both the Greek and our more familiar Latin alphabet.  Greeks realize that its unreasonable to expect visitors to learn Greek (which has only 14 million speakers worldwide).  It’s essential for them to find a common language with the rest of the world, especially their European neighbors to the west, so they learn English early and well.”

Indeed, more so than any European country we’ve been to recently, English seems almost universal here.

We found the hotel easily enough and checked in with the staff.  As it was early, our room would not be ready for another couple of hours, but we could put our bags in it and then come back later.  We did just that, pausing briefly to change out of our clothes as it was quite warm, me opting for shorts, a garment I would wear for our entire time in Greece except for the one day when we visited Monasteries.

We walked back down to the area around the Acropolis metro stop and found a coffee joint, Everest, (coffee places are ubiquitous here) for a cup apiece, not hungry yet as we’d had a substantial snack on the plane.  We then wandered around the area south of the Acropolis, checking out the neighborhood, locating a laundromat that we would utilize later and doubled back to explore the area north of the hotel.

We started on Adrianou, the street immediately adjacent to the hotel and one we would use constantly during our stay.  Later in the day and at night, this street full of shops and restaurants is crowded at all times, making progress slow as you dodge strolling vacationers, folks focused on their phone screens, and the occasional car or scooter.

The First of Many, Many Beers

By now feeling a bit peaked, we found a food stand on the outskirts of the Plaka, one that appeared to cater to locals, and had our first bit of Greek cuisine, a full plate of pork souvlaki and a large beer (500ml, about a pint) for 10 euros.  It came with slices of pita bread, tomatoes, lettuce, red onions and French fries a filling serving that would easily hold us over until dinner later that evening.

One note on the produce here is that it is some of the best you can find, juicy ripe tomatoes bursting with flavor, crisp cucumbers, fruit ripened on the branch, not in the cold room at your local supermarket.

Our Room at Hotel Phaedra

It was about the time we could actually claim our room so we walked back to the Phaedra and up the stairs to our spot on the third floor with a small balcony that overlooked the courtyard below.  It was time for a nap, one we gladly surrendered to, knowing we’d wake up refreshed and ready to do some more exploring.  Europe 2017 was off to a good start.