Up early as planned, our sleep pattern getting back to normal from the jet lag, we had breakfast downstairs (five euros apiece) and set out for the Acropolis around 8am.  We had purchased a combo ticket for 30 euros the day before (gaining us admission to it and other sites including the Ancient Agora of Athens, Hadrian’s Library, and the Roman Agora of Athens).

We entered the south gate and passing the Theater of Dionysus started uphill to view the Odeon of Herodes Atticus.  A 5,000-seat amphitheater built in 161 A.D. during Roman times, it is still used for performances.  Destroyed by the invading Herulians a century after it was built, it was reconstructed in the 1950’s to the spectacular state it is in today. 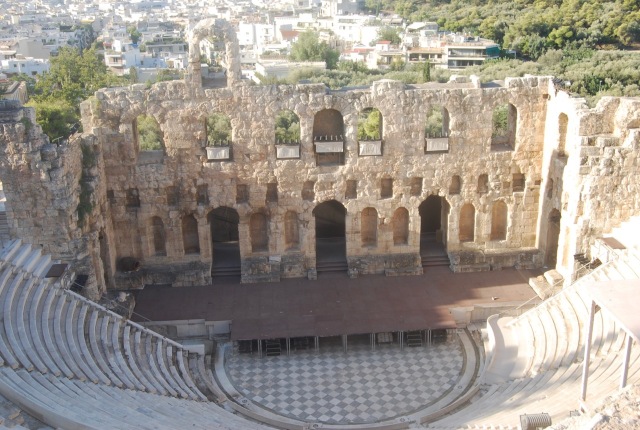 Continuing uphill we climbed up the steps to The Propylaea, the official entrance to the Acropolis.  Ancient visitors would stand here, catching their breath before making the final push to the summit, admiring gleaming columns and steep steps that fill your entire field of vision.  The buildings of this site were all constructed to complement one another with the Propylaea completed in five short years (437-432 B.C.) just after the Pantheon was finished. 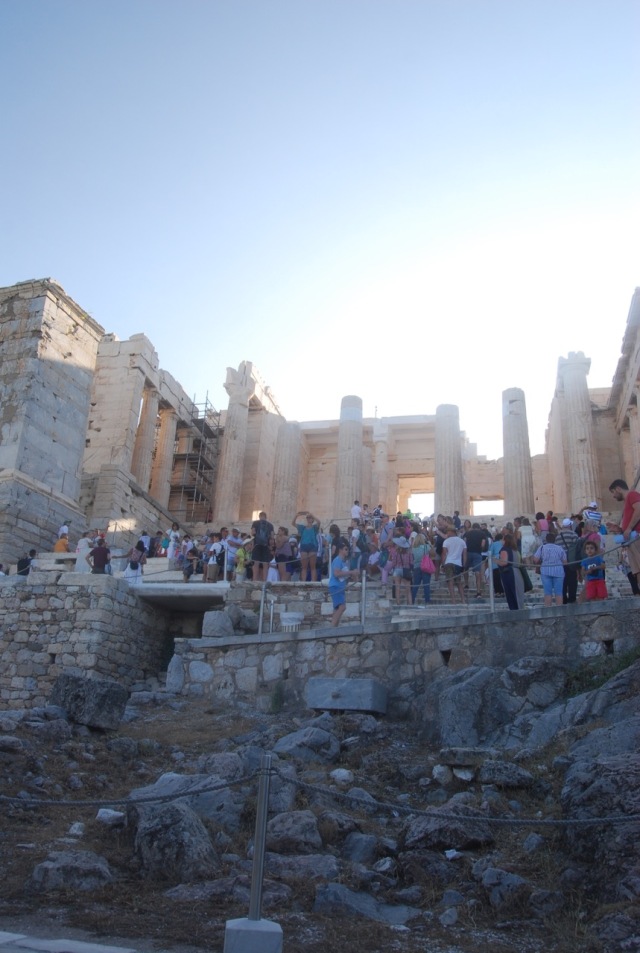 Flanking the Propylaea and built as it was being finished is the Temple of Athena Nike.  The Acropolis was mainly dedicated to the goddess Athena, patron of the City and this small temple honors her for bringing victory to the Athenians at in the Battle of Plataea in 479 B.C.  Extensively restored from 2001-10, it was completely disassembled, cleaned, shored up, and pieced back together. 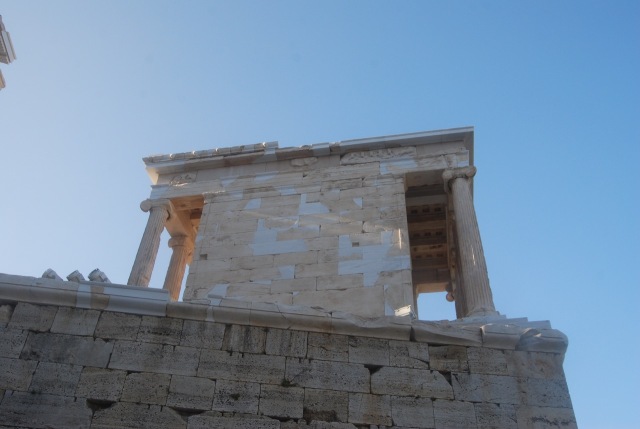 The Temple of Athena

We climbed the rest of the steps to get to the top and view the complex in its entirety.  The Acropolis rock is a mostly flat limestone ridge covering seven acres.  There’s the Parthenon ahead to the right; to the left with the six lady pillars (Caryatids) is the Erechtheion.  The Panathenaic Way runs between them and it, along with the other buildings are all aligned east to west, like the hill itself. 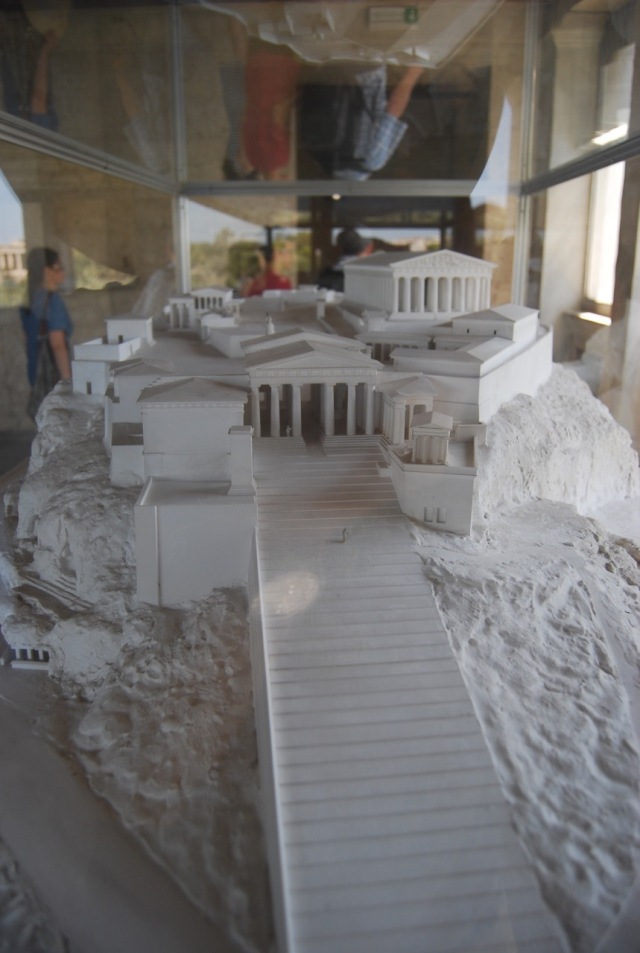 Model of the Acropolis

Our first stop was the Parthenon, generally regarded as the finest temple in the ancient world, standing on the highest point on the Acropolis and now largely in ruins, partly from the ravages of time, but mostly from a direct mortar shell hit it sustained in 1687 launched by a Venetian army aiming for the gunpowder stored inside it by the Ottomans. 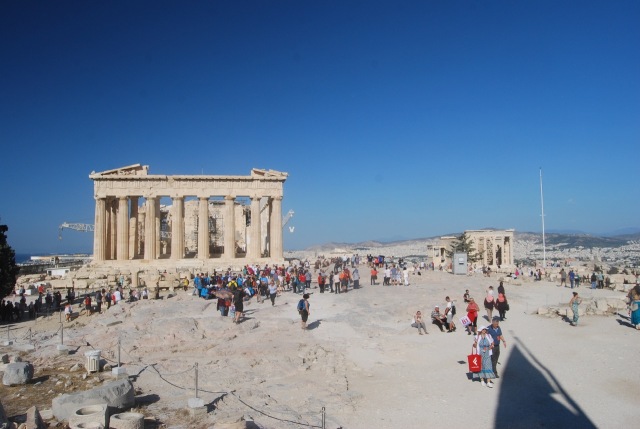 It’s extraordinary enough today but one can only imagine the impression it would have made when completed 2,500 years ago.  Greece’s largest Doric temple is 228 feet long and 101 feet wide at each end with 8 outer and 6 inner fluted Doric columns and 17 columns along each side plus 27 inner columns.  The outer columns are 34 feet high and 6 feet in diameter.  When completed, it was decorated with statues, carved reliefs and painted in brilliant colors.

What makes it truly exceptional is the number of optical illusions the architects used to give the building its subtle feeling of balance, strength, and harmonious beauty.  To create this artifice, its base arches several inches upward in the middle to counteract the sagging look it would have had if it had been built on a straight line.  Its columns tilt ever so slightly inward and the corner ones are thicker than the rest to make them appear the same size.  The end effect is one where all of the lines and angles appear straight, and yet when viewed closely actually curve slightly.

J and J at the Parthenon

We left the Parthenon and moved over to the other side of the complex to walk around the perimeter of the Erechtheion.  Although overshadowed by its more impressive neighbor, this building was perhaps the most prestigious.  It stood on one of the oldest sites on the hill, where the ancient Mycenaean’s built their palace.  Inside would have stood a life-size olive-wood statue of Athena in her role of Athena Polias (Protector of the City).

Near the porch that contains the Caryatids there is an olive tree, a replacement for the one Athena planted here in her face-off with Poseidon, where the two of them fought for the naming rights to the city.  Poseidon threw his trident which opened a gash in the earth to bring forth water.  Athena won the contest by stabbing a rock with her spear, spouting an olive tree, a symbol of wisdom.  The Erechtheion allows for the worship of both gods to show that there were no hard feelings over the outcome of the contest.

We finished up and left the hilltop and made our way to the Ancient Agora of Athens, the site most closely associated with the development of Athenian democracy.  While the Acropolis was the showpiece, the Agora was the real heart of ancient Athens.  Although used as a residential and burial area since 3000 B.C., it became a public space around 600 B.C.

Model of the Agora

For some 800 years, until its destruction by barbarians in A.D 267, it was the hub of all commercial, political, and social life in the city, as well as a home to much of its religious life.  Agora means gathering place, but you could call this space by any of the names we typically give the busiest part of a city; downtown, main square, forum, piazza, marketplace, commons and so on.  It was a lively place where the pace never let up, much like modern day Athens.

Grounds of the Agora

The South Stoa, Used as a Shopping Mall and Now the Museum

We started with the museum, housed in a building known as the south stoa.  It has a comprehensive collection of artifacts relevant to the time period that Agora was active, including a number of the devices that were used to count votes.

Mechanism for Choosing Who Would Serve on Jury Duty

Also used was a practice known as Ostracism a procedure under the Athenian democracy in which any citizen could be expelled from the city-state of Athens for ten years.

While some instances clearly expressed popular anger at the citizen, ostracism was often used preemptively.  It was seen as a way of neutralizing someone thought to be a threat to the state or potential tyrant and the word “ostracism” continues to be used for various cases of social shunning.

Little survives from the classical Agora except for the well-preserved Temple of Hephaistos.  Started in 450 B.C., just before the Parthenon, it was built as part of a massive reconstruction of the Agora after invading Persians destroyed the city in 480 B.C.  This is a classic peristyle temple (like the Parthenon), made of Pentelic marble in the Doric style.

In the 7th century A.D. it was converted into the Church of Agios Georgios and given the vaulted ceiling that survives today.  During the Ottoman occupation, the Turks kept the church open but permitted services to be held only once each year on St. George’s Day.  Because it was continuously in use it is remarkably well preserved. 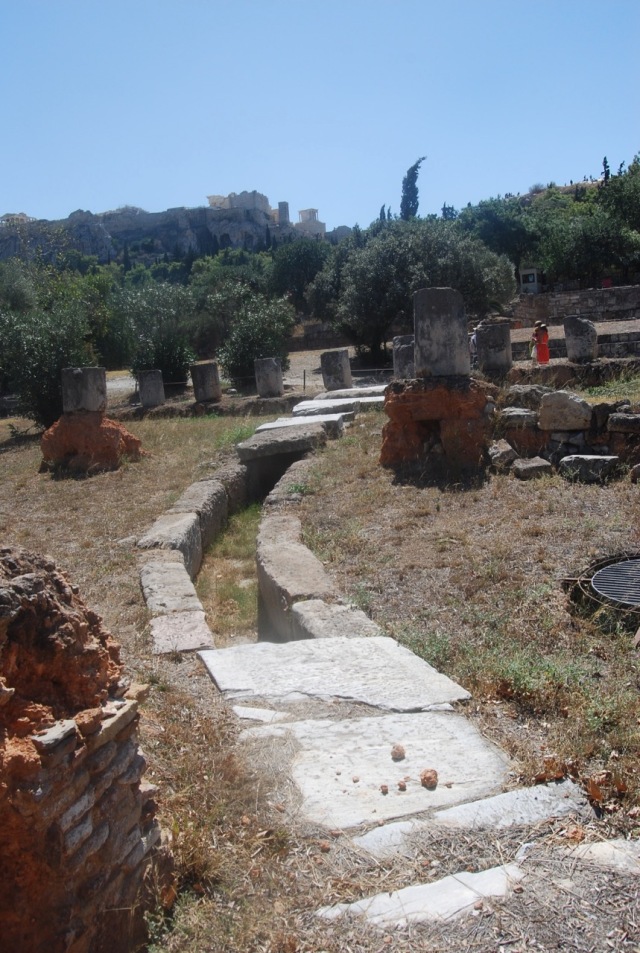 We left the temple and began to make our way out, stopping to take a look at the statue of Hadrian.  The first Roman Emperor to wear a beard he was a Grecophile and a benefactor of Athens.  The statue contains a number of smaller carvings including Romulus and Remus suckled by a she-wolf who supports Athena on her back.  This was Hadrian’s vision, that by conquering Greece, Rome actually saved it. 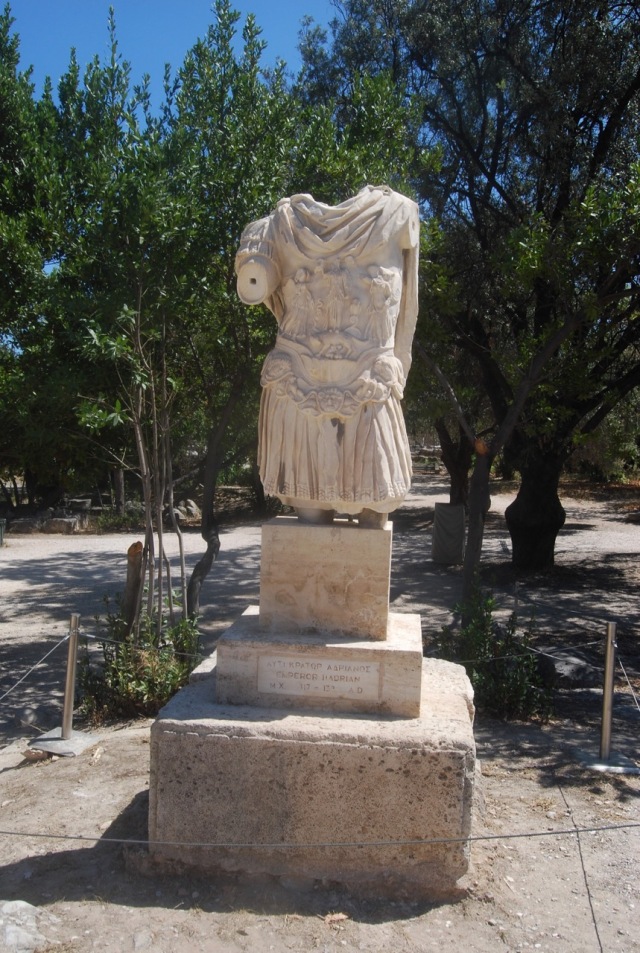 We left the Agora and stopped at a pizza joint, Yum-Me, for a slice to carry us into the rest of the day.  Through some confusion we paid for one but ended up with two, getting to sample a couple of combinations.  It was OK food, not the best we’ve had and not the worst but it did the job, propelling us onward to complete the balance of the Rick Steves Athens Walking tour that we hadn’t already covered.

I’ll describe this in the next post and begin to recount the five-day guided bus tour we took to the Peloponnese.  It would be the first time that Joanna and I had taken any type of extended tour and we were eager to see if we would like the change of pace.  Stay tuned for the rest of Athens and more. 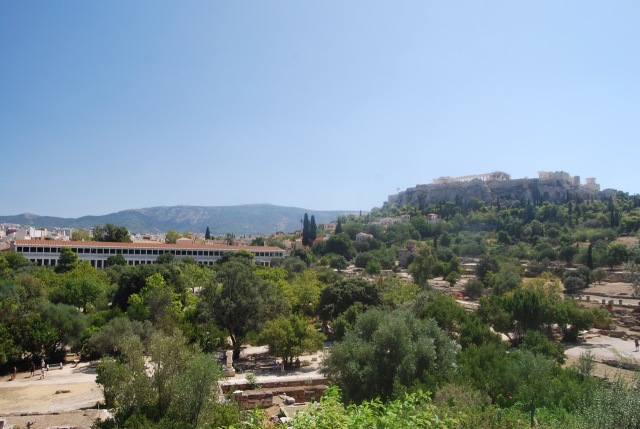 Agora Grounds with Acropolis in the Distance