We slept OK that night, the snoring of one of our Australian female roommates hardly an annoyance and preparing us for future nights of sleeping in rooms with groups of other folks. We awoke to the alarm at 6am in pitch dark; it wouldn’t get light out until we started walking at 7:30. Our roomies kept sleeping while I went through an abbreviated 20 minute stretching routine and about the time I finished the room came alive as we all started preparations for the day ahead. 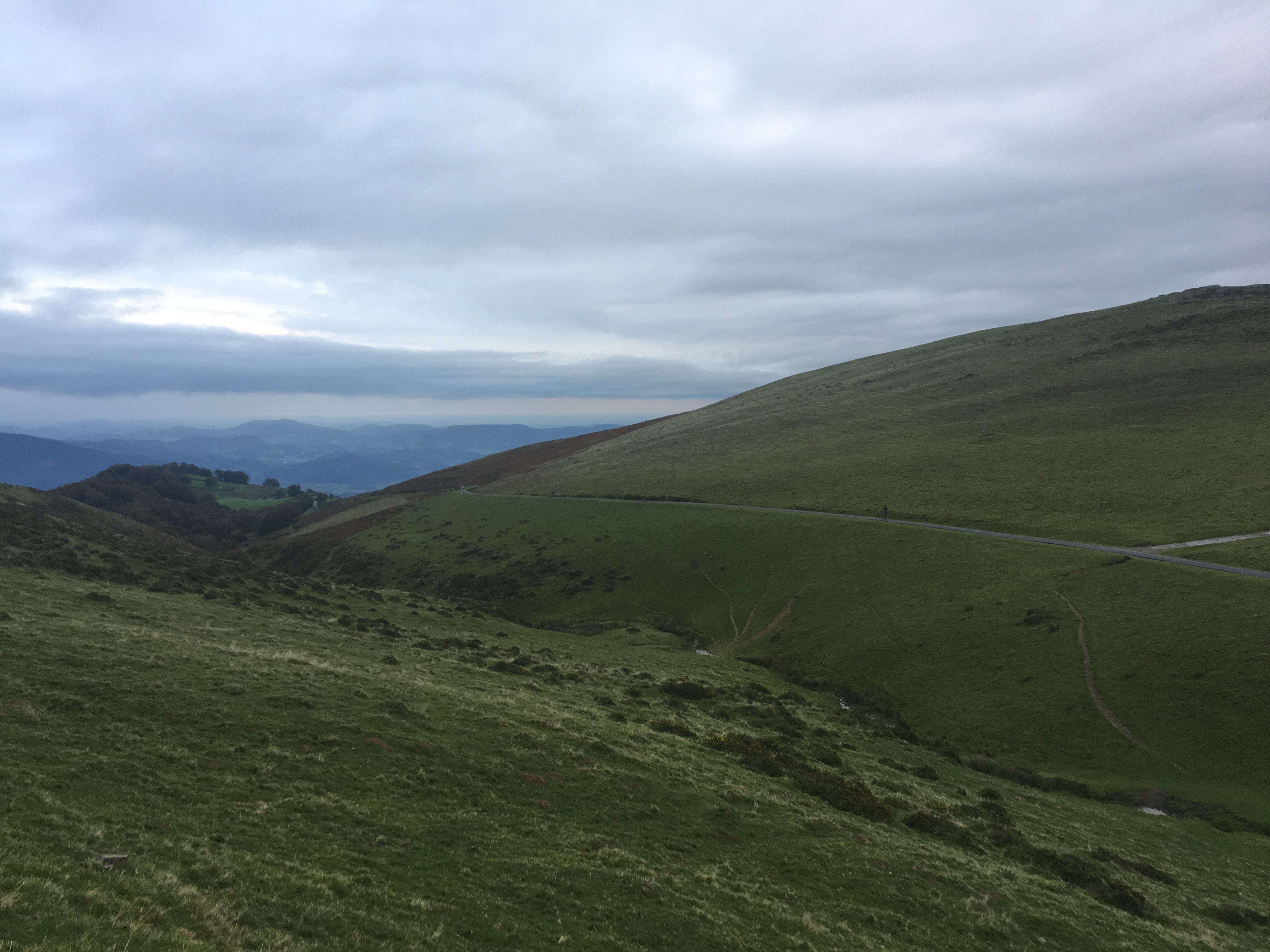 Foggy Backdrop to the First Part of the Day

Breakfast was multiple pieces of toasted baguette with butter and jam with coffee, nothing exotic but filling enough to sustain us for the first few hours of walking. And walk we did, 12 miles or so, that big amount of elevation gain at the start and a long painful downhill at the finish. It was a foggy overcast day to start and by the end we’d have a heavy drizzle, but walking through the mountain fields, viewing the sheep, cows and horses grazing against the backdrop of fog shrouded peaks and valleys would have produced a nearly mystical experience if it wasn’t so freaking hard. 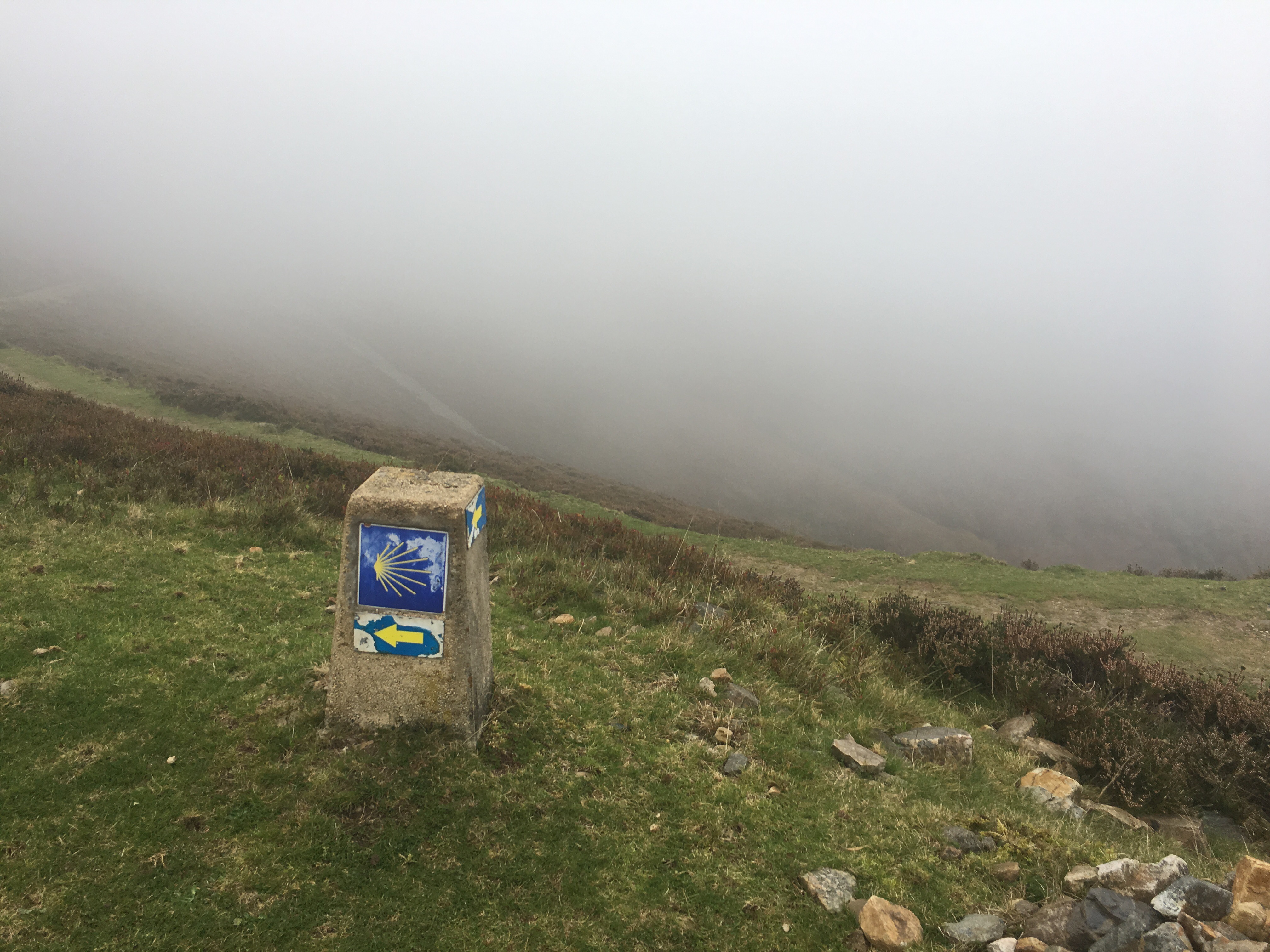 At mile 9 or so I felt pretty good, but this would change once we finished the downhill, punishing the feet and those muscles that group just above the quads. We entered Roncesvalles a bit before 2pm, having made excellent time (nothing much to stop for so we just walked) and cooled out waiting for the Pilgrims’ Hostel of Orreaga / Roncesvalles to open the dormitory.

Joanna hiking up the grade

We will be using a combination of hotels, pensions, and albergue’s on this trip. The last is the pilgrim’s (peregrino’s) lodging of choice, usually a multi bed dormitory ranging in cost from a donation to 15 euros a night per person. Some include breakfast, or dinner, or both, or those can be had for an additional cost. A typical Pilgrim breakfast we’ve found so far is a good cup of coffee, one or more pieces of toasted baguette, butter and jam. If you pay for it it generally runs about 3 euros. Not exotic, but easy enough to eat, digest and it gets you on the road with minimum fuss.

Leave Your Dirty Boots Outside the Rooms

The one in Roncesvalles was brand new as of 2011, large and well kept in a former monastery. We found our beds (#’s 153 and 154, a bunk bed), showered and hung out as the place filled up, reading up on the next couple of days of hiking, trying to get an idea about the effort we’d need to make and where we should consider staying. Since we have elected to ship a duffel bag full of our extra weight each day at a cost ranging from 5-8 euros, our ability to select lodging day of the hike is forgone as we need to indicate on the shipping tag attached to the bag where it is going. 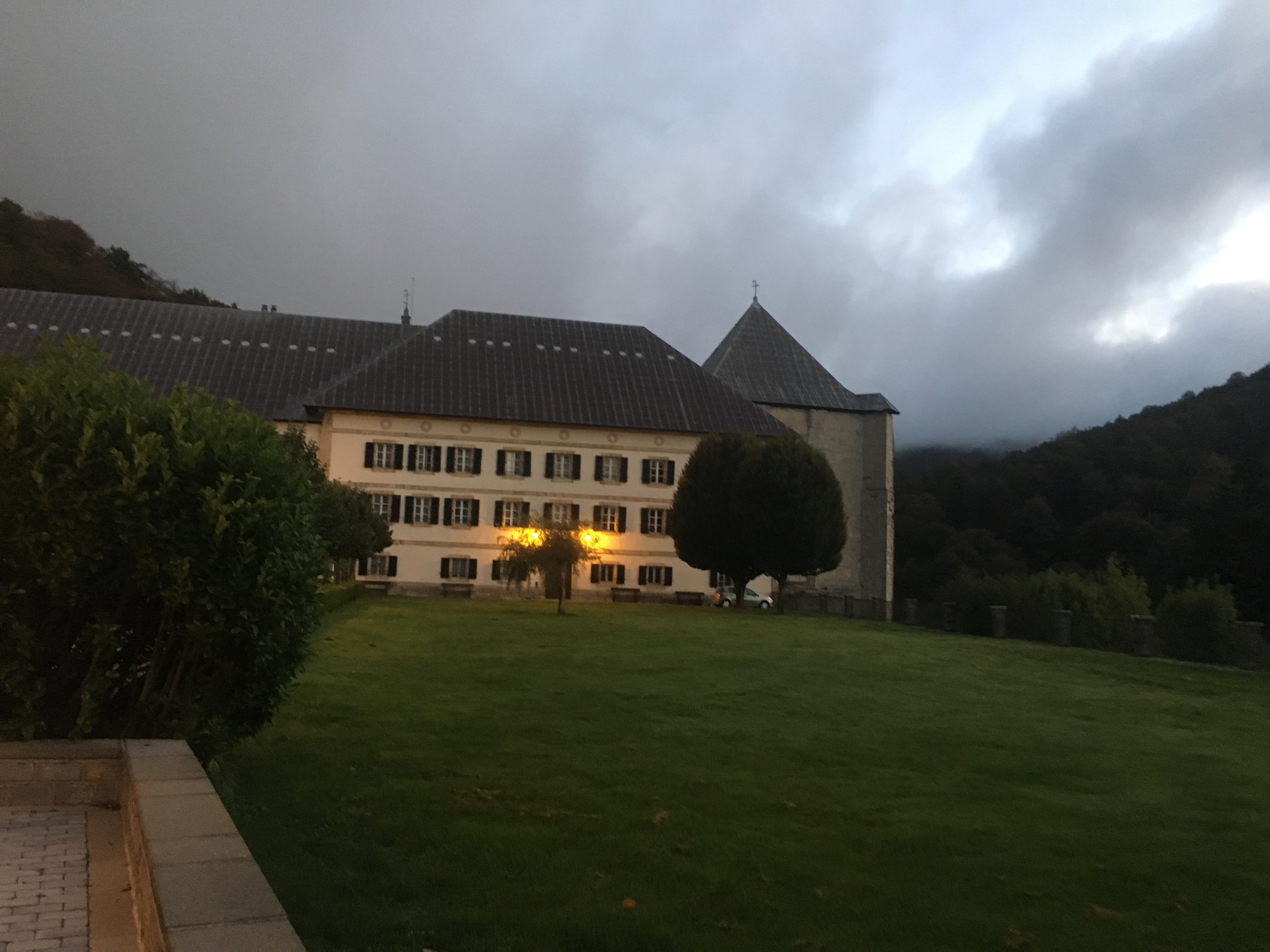 The Albergue in Roncesvalles in the Morning

Our included dinner that night with about ten euro was next door at a restaurant; at the appointed hour we walked over and were seated upstairs at a table for 14 in a room with fellow pilgrims and offered our choices, soup or pasta to start, trout or pork as the entrée and a dessert. We were delighted to see a bottle of 2016 Tempranillo on the table for every four settings and would thoroughly enjoy that vintage. So far, this wine at dinner thing was working well for us. 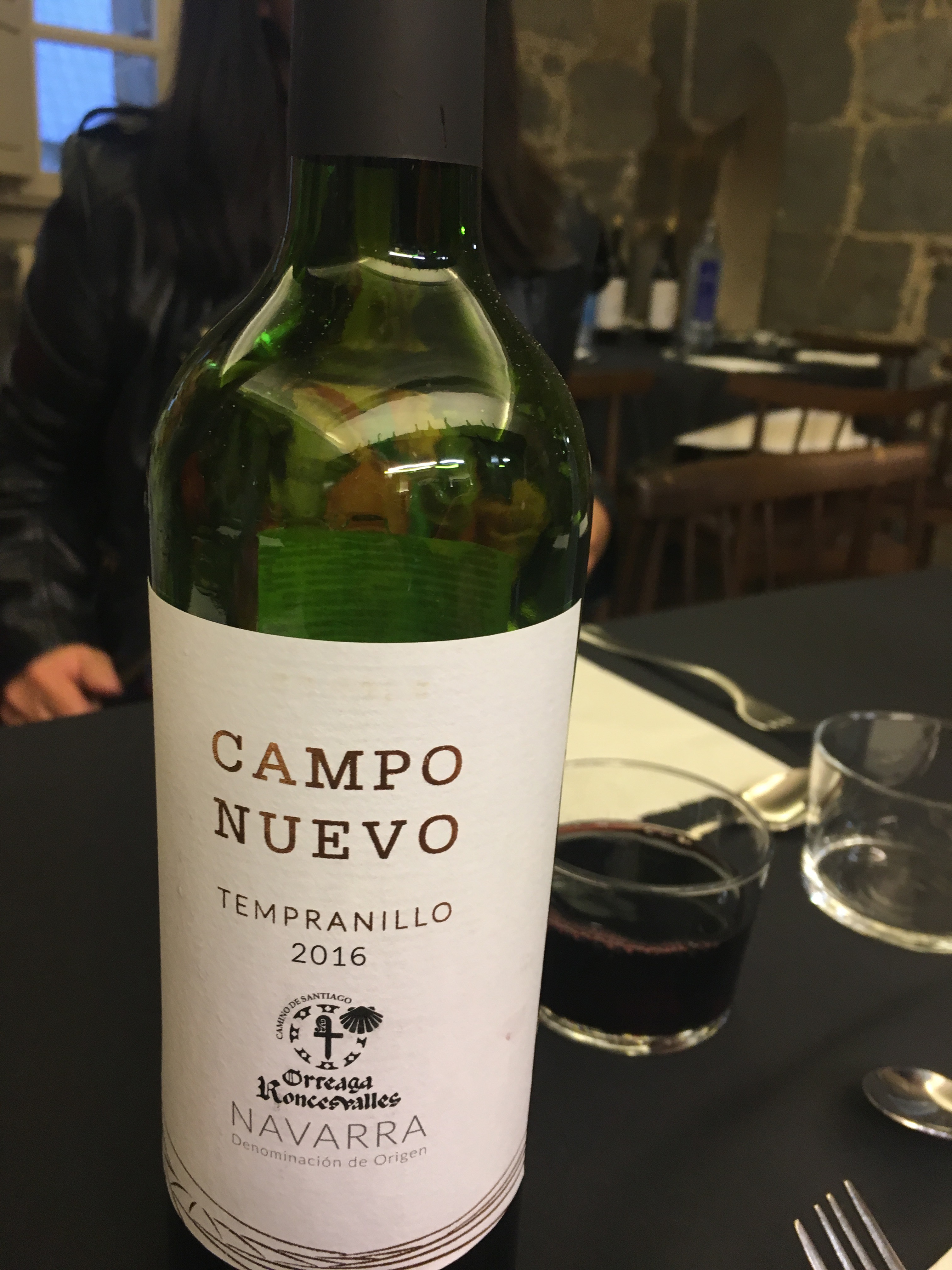 Our food was quite good; Joanna raved about the trout and our dessert of a type of bread pudding was nicely complimented by the red wine. As we had already experienced and would continue to do so throughout the trip, this is all about the people you encounter, all committed to this walk and that commonality lends itself to easy conversations. 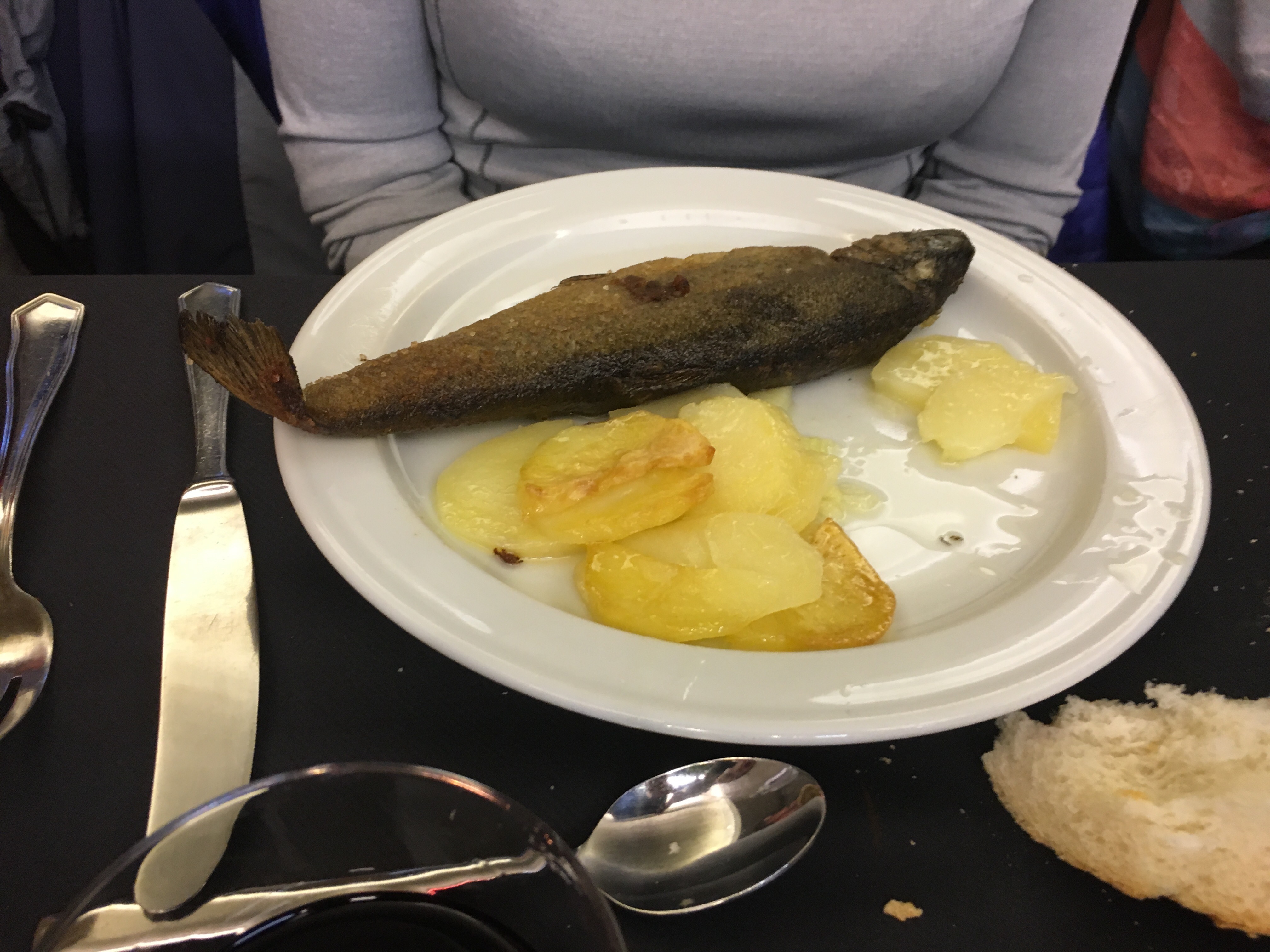 Surprisingly, that night in bed, after the guy in the next pod whose breathing sounded like he was dying went quiet (or died), it was very quiet and we slept as well as we could in a strange bed in a dormitory. I’d set the alarm for 6am but our pod mates were up before that and so we arose as well, did our stretching, packed up the bags and went next door for our pilgrim breakfast.

We’d be doing another twelve miles to the town of Zubiri, mostly downhill but with sections of uphill. After the rain of the day before we were blessed with beautiful sunny skies and moderately cool temperatures until later in the day. And so we hiked. As each day of this journey will feature day after day of hiking 12 or miles, I’ll leave out a description of each unless we encounter something extraordinary, be it scenery, people we meet, or some other worldly experience. 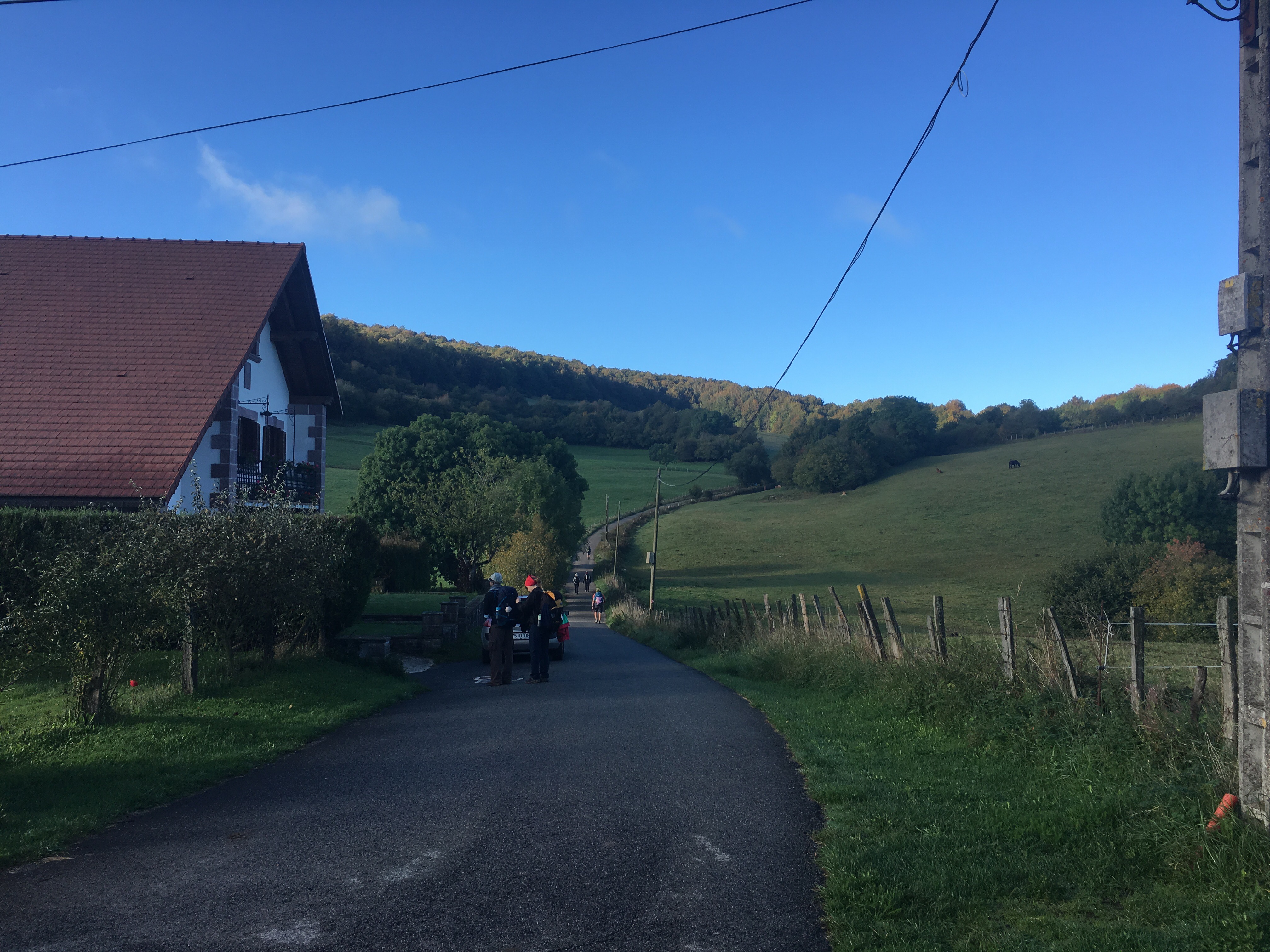 Again we felt pretty good up until mile ten or so and then a couple of miles of steep downhill took a toll on our bodies. Finally arriving at Zubiri, we made a right turn to cross the bridge and locate our lodging for the night, Pension Usoa, our own bedroom for 34 euros a night with a shared bathroom. The proprietor spoke very little English as I had discovered the day before when I made the reservation, but her enthusiasm to communicate and my high school Spanish served us well.

I made a dash around the corner to a small market to pick up a couple of cans of beer to tide us over until dinner. A little later, feeling hungry we walked into the small town to a place that had advertised a pilgrims meal for ten euros apiece including wine, Polideportivo Esteribar, essentially a small bar/café in the municipal sports complex. We ordered off a limited menu, for

Joanna a lentil soup and , for I a mixed salad and pork stew. Dessert was something sweet but ultimately not memorable. 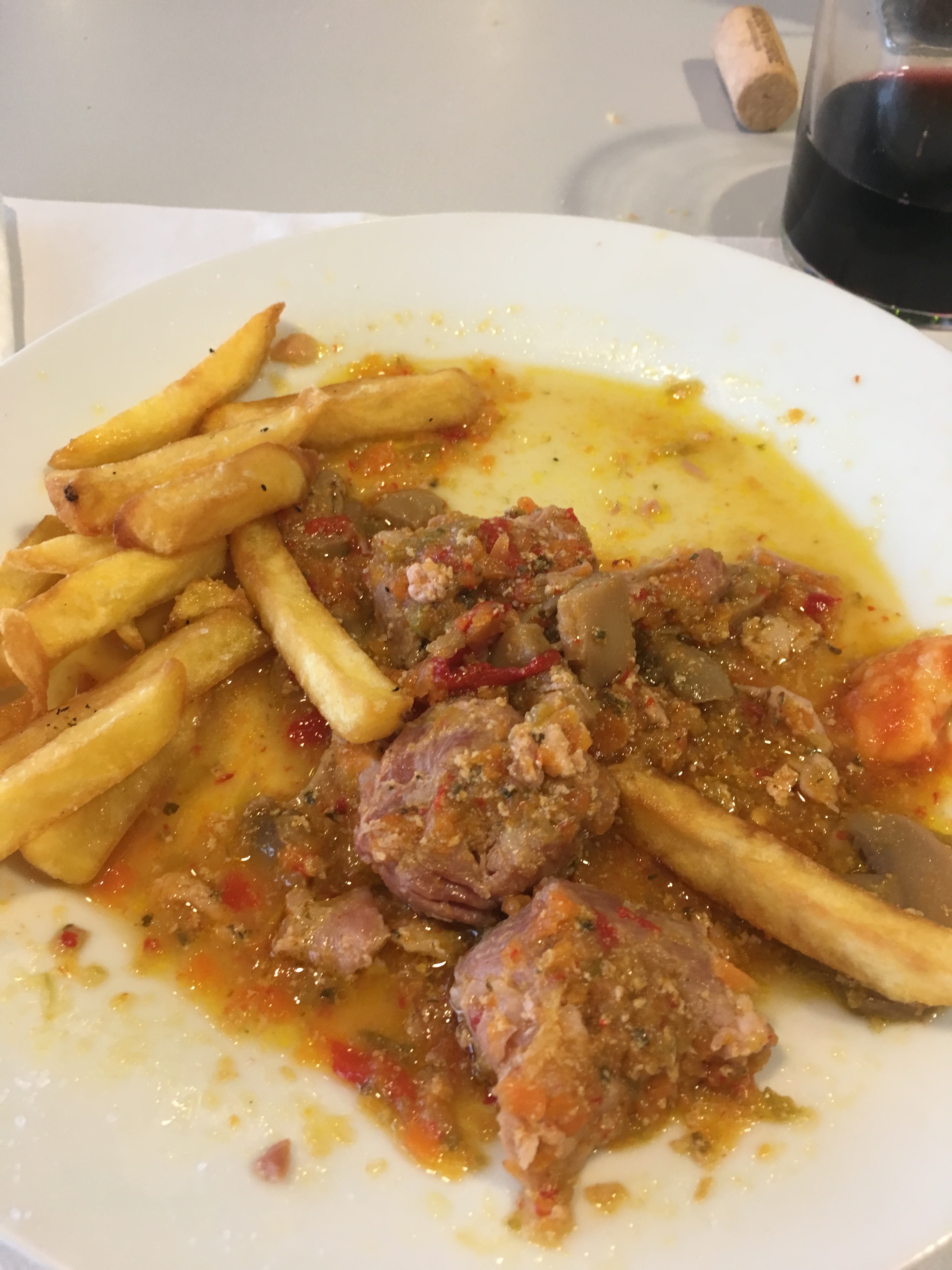 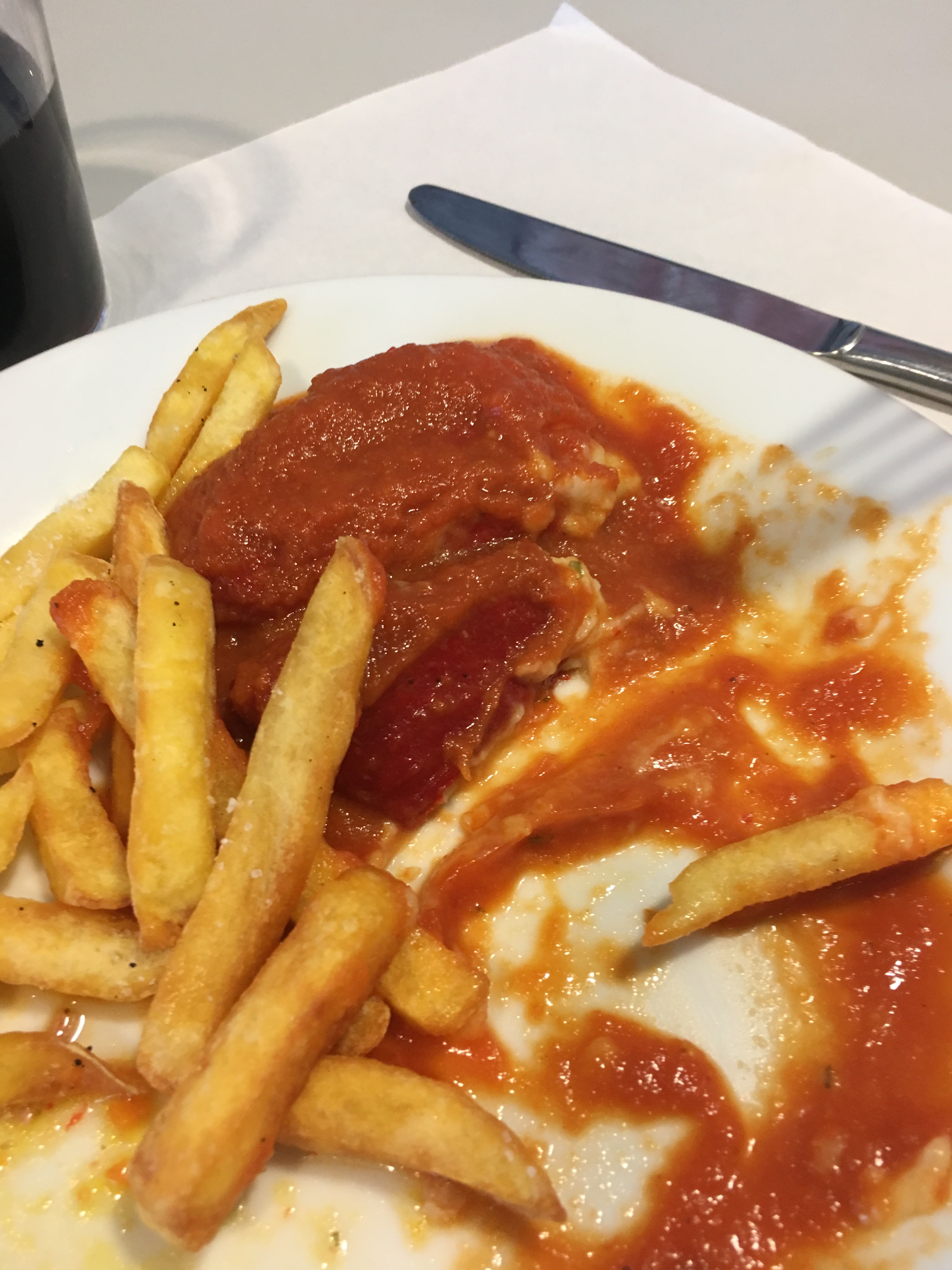 This was filing but unremarkable stuff, camp food so to speak. But with a bottle of wine included there wasn’t much to complain about. We walked back to the Usoa, watched the end of the World Championship bike race from Bergen with Peter Sagan winning for the third time in a row after his disheartening disqualification from this year’s Tour de France.

That Bottle of Wine Included with Dinner

Sleep came easily and we looked forward to what we thought would be a fairly easy day’s hike into Pamplona, some of it over terrain and through surroundings we were familiar with from our stay there We were a couple of tired and happy pilgrims.