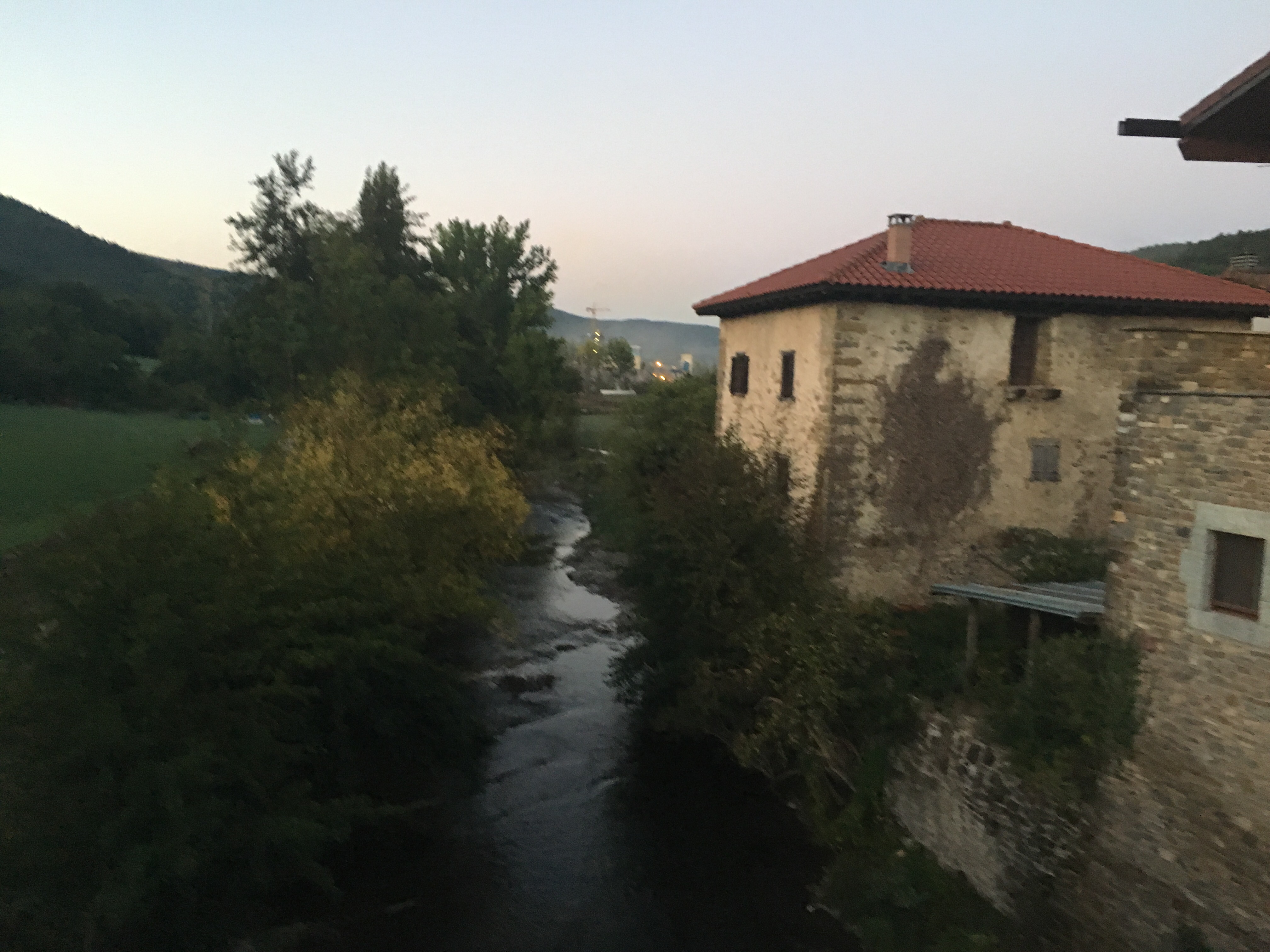 Forgotten Photo of our Entrance to Zubiri

We’d originally planned to just hike 8 miles or so each day the first week to get ourselves into shape. That plan flew out the window our first couple of days as we followed our primary guide book, Hiking the Camino de Santiago by Anna Dintaman and David Landis which sets up the sections at lengths of 12 to 18 miles. We are also using as a supplement a handy and lightweight Michelin Guide, the Camino de Santiago.

A Fellow Pilgrim Getting Some Water

It was another brilliant day for weather, clear blue skies and moderate temperatures, cool to start and warming up by mid morning. We were looking forward to this day as it would take us to Pamplona, a town we enjoyed in 2014 when we camped at Escaba, just outside of town on the same road we’d be hiking near as we approached our goal. We made good time to start and our bodies felt good as we hiked through a pleasant combination of paved roads and dirt lanes and paths.

We stopped for a snack not long after passing by a large mining plant, getting our first taste of a sandwich (Bocadillo) that we would enjoy time and again, a Lomo without or without Queso (pork loin with or without cheese). Aided by a cup apiece of café con Leche (expresso with milk) it’s a fuel source good for many miles to the gallon. 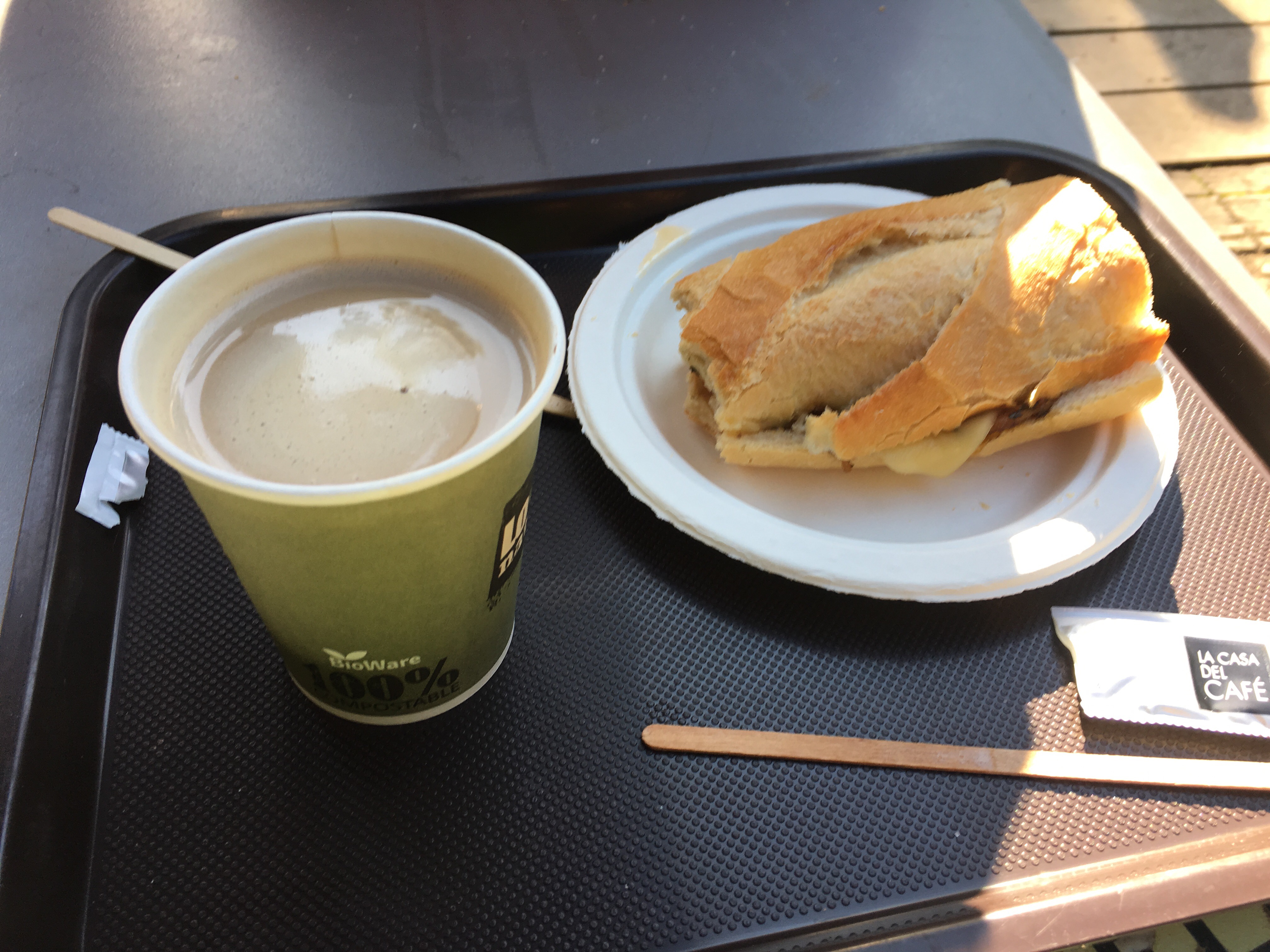 We continued to run into folks walking along on the same timeline as us, a common occurrence as we all tend to use the same guidebooks and the distances we are walking are about what most folks want to accomplish in a day. Later on I’ll post a grid that shows the folks we connected with in some fashion at various spots along the way and just how many times we met up. 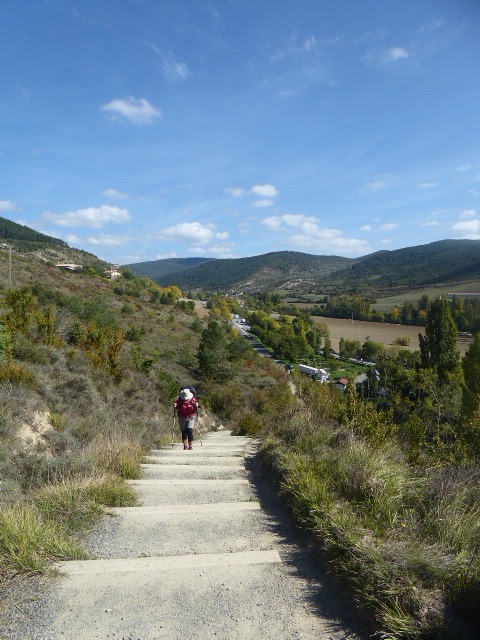 Steep Climb Outside of Pamplona

As we continued walking the day warmed up and we encountered changes in terrain that made for some level of effort over just flat going, short steep uphill sections followed by similar downhills. We kept looking for landmarks that would remind us of the bike ride we took out of our campground in 2014 up the road in to the hills, but couldn’t find any.

About this time, my back started acting up, sharp pain mid torso that felt like a dull knife, such that I would have to stop every 100 or so paces and stretch for a count of ten full seconds, providing relief for another 100 paces. This crazy routine didn’t seem to affect our hiking speed as we generally walked an average right around 2.5 miles per hour including our stops, but dealing with steady pain makes for a long day on the Camino.

That Bridge on the Outskirts of Pamplona

We finally hit the outskirts of Pamplona, recognizing the bridge that led us into the suburb of Trinidad de Arre where we had joined the Camino in 2014 on a bike ride from our campground. From here it is a long 4.5 kilometers (2.8 miles) into the center of town where we would be staying, at Albergue Plaza Catedral just inside the old city walls.

This was a long couple of miles and it would reinforce a thought we’d had before leaving on the trip, that is we’d knock off these kinds of distances (long walks through town into lodging, or out of town from lodging) by using public transport. Our check in at the Albergue went smoothly, our host speaking excellent English and we were happy to see we’d be staying in a room with just six bunks that would end up being occupied by us and just one other person.

After showering and a bit of recovery we walked to Joanna’s favorite bakery, Beatriz, to pick up tasty treats. I’d noticed a Carrefour on the way and we would later return there to pick up some supplies for the next couple of days. Joanna popped out of the bakery and we immediately consumed a sinfully good croissant like pastry full of a rich chocolate filling, the unit still warm, a taste sensation so good it made the other items we’d purchased seem disappointing in comparison.

Tapas for Dinner and the 5euro White we Drank Beforehand

Curiously, given the level of exertion we’d experienced, we weren’t that hungry, our pork loin sandwich and some snacking, plus just being tired, kept our appetite at bay. Undecided about dinner, we stopped in at a bar close to the Albergue and hit upon the perfect solution, a glass of rose apiece and four tapas to split. Our first experience with tapas in 2014 had been a bit disappointing, perhaps our expectations to high. This one though hit the mark, a combination of flavor choices, including the star of the show, a skewer of shrimp and pulpo (octopus).

The ascent Up To Alto Perdon

After a hearty breakfast the next morning, we walked down to Plaza Principe de Viana to catch the #1 bus out to Cizur Menor, a jumping off point for the Camino that saved us 5 kilometers of walking, Who says that old folks don’t learn from experience? We disembarked from the bus, bought some food for the hike at a market and hit the trail for a day of significant exertion, hiking to the summit of Alto de Perdon, at 790 meters (2,400 feet) a significant bit of ascent from our start at 500 meters (1,500 feet). 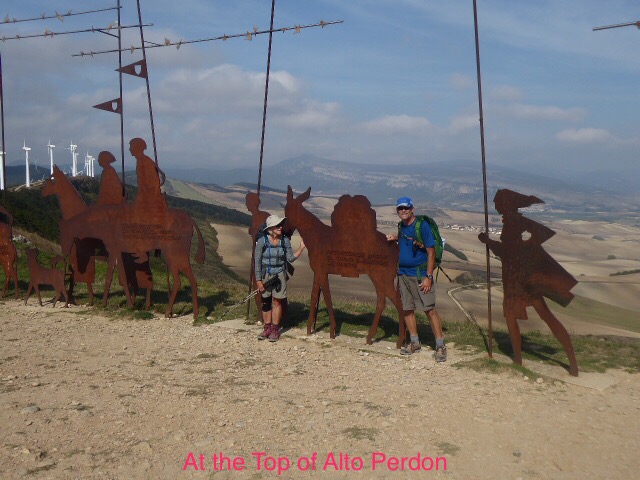 At the Summit of Alto Perdon

This was followed by almost as much in descent down a very rocky trail which eventually leveled out and left us with a little under five more miles of walking to our destination, the Albergue Jakue on the outskirts of Puente La Reina. We arrived hot and tired, checked in, and pleased with our room, just six beds (three bunks) sharing the bathroom we showered and relaxed a bit, consuming a couple of beers in the pleasant outdoor patio, before heading into this charming small town for dinner.

We’d walked a number of blocks down the narrow Main Street, bordered on each side by two story residences and after looking at menus, decided to eat at La Ronda de Tito due to its fetching looking pilgrim menu, only ten euros including wine. Just a couple of tables were occupied when we arrived, but the place soon filled up and we’d later understand why, receiving a large amount of food and that ubiquitous bottle of red wine.

That Bottle of Red

Joanna a ordered the white bean soup with quail and I the spaghetti bolognese to start, then a grilled salmon for her and chicken breast with white sauce for me. As mentioned, the portion sizes of the starters were so large that it was all I could do to eat half, wanting to leave some for the main. When they came, Joanna’s salmon was delightful, my chicken good for what it was, likely something frozen and heated up for the occasion, still good none the less. Dessert was included as well, nothing fancy but a sweet way to complete the meal. 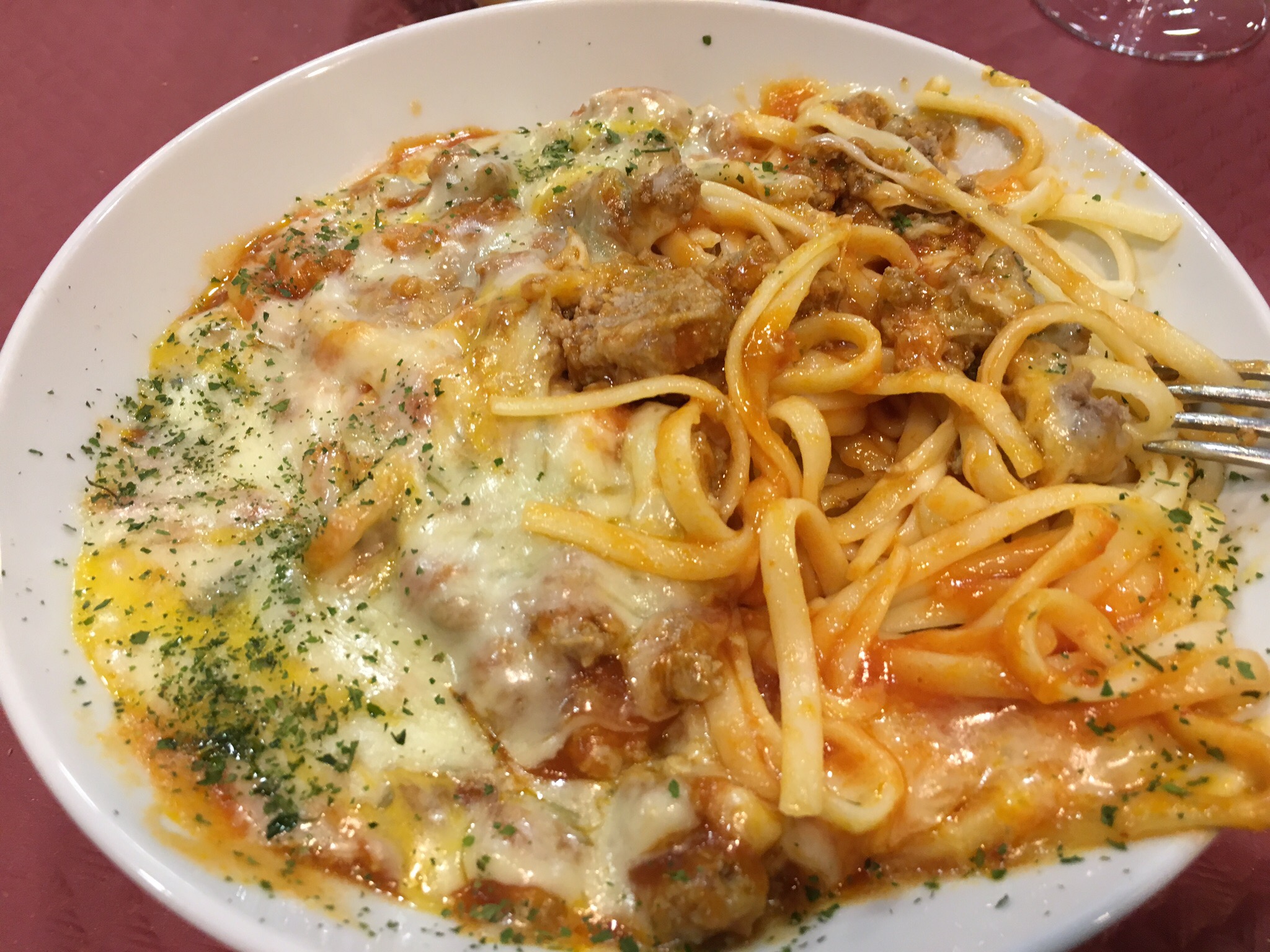 We returned to Jakue settled in, with only an hour or so before we’d go to sleep. We hadn’t been there long when Gerda, a solo traveling woman from the Netherlands staggered into the room, dead tired after a long day on the Camino. She had suffered from knee pain earlier in the journey and it was slowing her down. She stopped partway with the intention of taking a taxi and then fell asleep on a park bench, awakening late, missing the ride and having to walk the last miles in the dark.

We eventually went to sleep after talking to her and our other roommates, anticipating the 13.5 miles we’d need to walk the next day to Estella. We’d see what that day would bring. 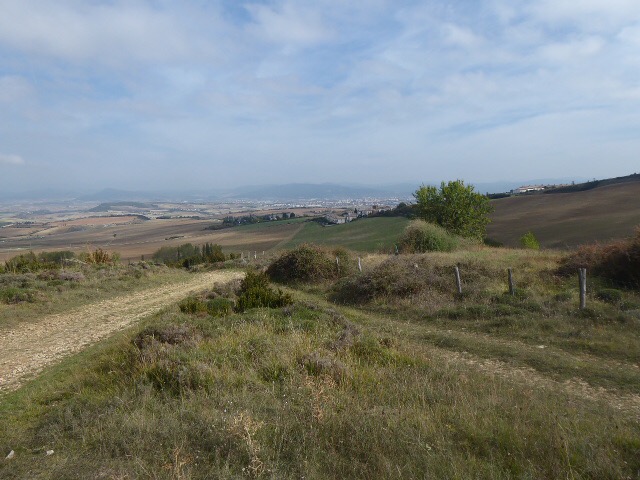 The View Back to Pamplona