We left Puente La Reina on a cool morning that warmed up fast, our good luck with weather holding steady, another great day for hiking with moderate temperatures and blue skies. On the way out of town we’d stopped briefly to take pictures of the famous six arched bridge over the River Arga, built by Queen Muniadona, wife of King Sancho III in the 11th century for Pilgrims on the way to Santiago.

The Bridge at Puente La Reina

This would be a day of gently rolling country side but with a few sections of steep uphill, just to keep us from getting lazy. Along the way, as had and would occur time after time, we passed, or were passed, or ran into folks we had met along the way. The ever present refrain of Hola or Buen Camino rang out between us, recognizing this adventure we had signed on to.

As would become routine, a couple of hours into that day’s hike when the first town appeared on the horizon, we stopped to get two coffee con leche’s (milk) and what ever food item looked appealing, be it a pastry of some sort or a sandwich (bocadilla). 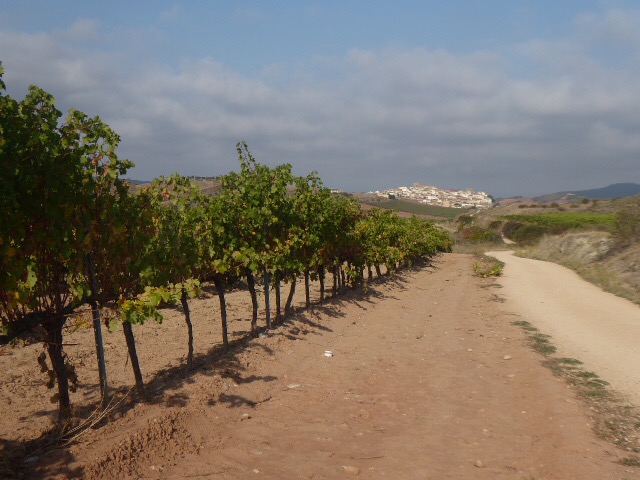 Vineyards Along the Way

We arrived in Estella and made, at the end of a long day, a seemingly endless trek to our lodging for the night, Albergue Oncineda, which was located at the far end of town. We walked up a last steep hill to reach this, the city’s youth hostel and checked in, the very friendly clerk offering us cold water, which she brought to us with ice in a pitcher, possibly some of the most refreshing we’ve consumed in quite some time.

A Bridge in Viana, Elliot and Sally Walking Across

One of the recommendations for this place was that the rooms were large and generally contained less than six beds, all singles. Our room had five and when we entered we found an American couple already there, Gail and Roberta, both about our age and both walking to Santiago. Like us they were sending luggage ahead each day, a condition we’d once thought unlikely and yet having found that many do so, bags with shipping tags stacked up in lodging lobbies each morning as we depart for the next stage. It made us feel better that we weren’t each carrying a full load. 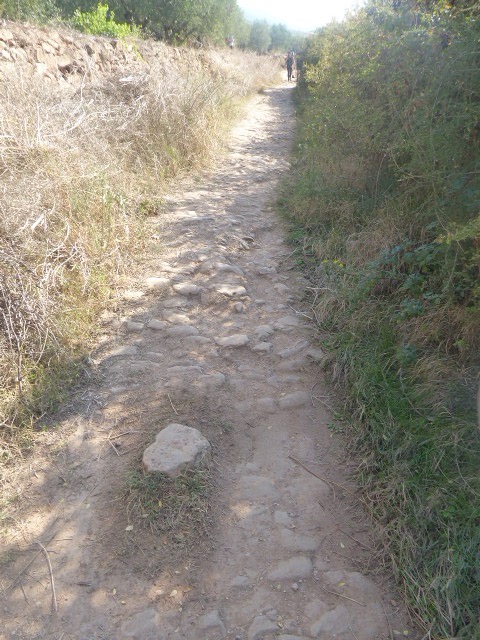 A Section of Original Roman Road

We ventured out in search of a restaurant, with the choice of turning right or left at the Main Street we’d walked in on, our choice being the wrong one as we found no eateries within blocks. We did locate a Dia Supermarket, a brand familiar to us from our 2014 trip so knowing there was a nice kitchen back at the Albergue, we bought a couple of frozen items, cannelloni with meat and mixed vegetables, along with a bottle of white wine.

On the Way into Estella

We had quite the adventure back at the kitchen trying to figure out the timer and power level on the microwave but eventually prevailed for what was essentially camp food, certainly nothing worth a picture, but filling none the less, made better a little later by the bottle of white we’d purchased at the market. . 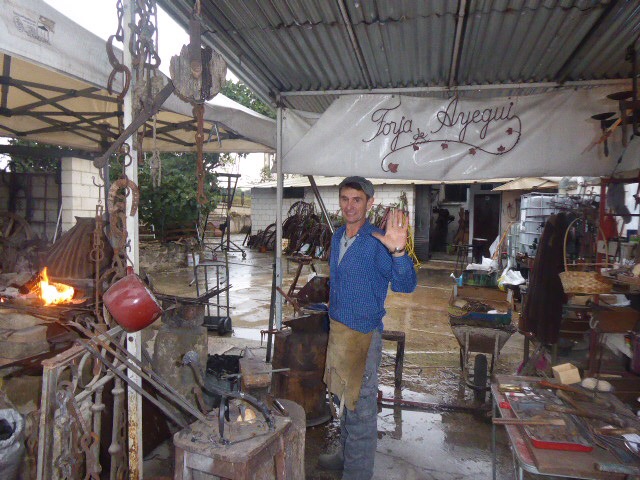 We opted for the five euro breakfast the next day, coffee, juice and an assortment of toast, a small pastry and fruit, more than enough to get us down the road. It was an overcast day, with some minor drizzle during the first part of the stage. Not far out of town at about 2 miles, we stopped at a blacksmith shop along side the trail to admire his handiwork and purchase a small iron shell I could attach to my pack, the scallop bring the symbol of the Camino.

Our next stop, just a few yards down the path was the well known wine fountain provided by the Irache Winery, next door to the historic Irache Monastery, built in 958 and now scheduled to become a luxury Parador Hotel. As in 2014, we stopped and sampled the wine, a bit early in the morning to really enjoy but then again, a pilgrim must do what a pilgrim must do. 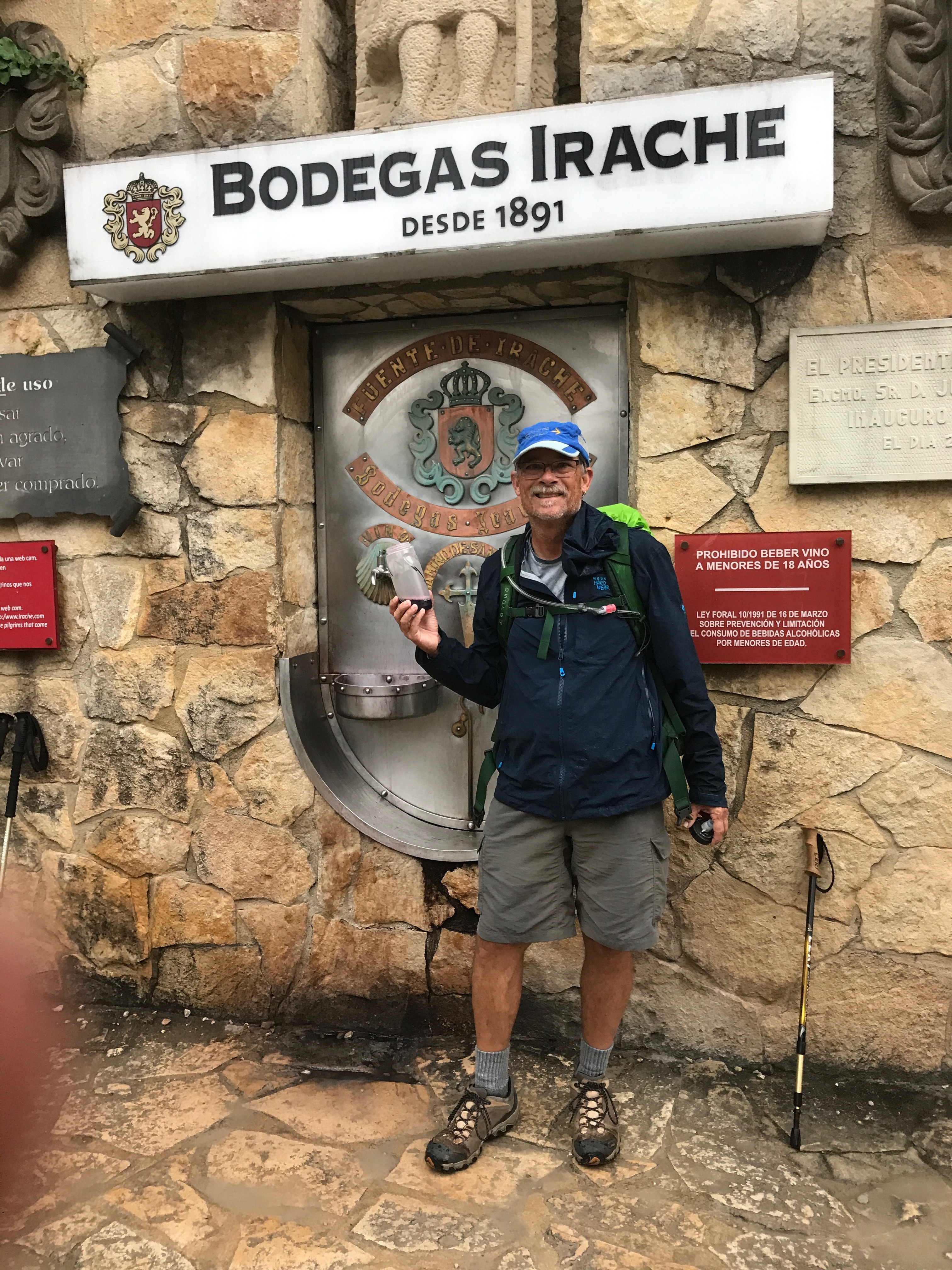 The Pause That Refreshes

We continued on, our bodies now becoming conditioned to walking the miles with the exception of my lower back, which started to hurt without cease. I continued my routine of walking some distance, 200 paces or so, then stopping to stretch for a count of 30 before heading on. This makes for a long day but curiously, our pace in between stretching remained consistently even, such that we didn’t really fall to far behind, averaging about 2 miles per hour each day including our stops. So we could count on doing ten miles in about five hours.

The Run Into Los Arcos

We were glad to reach our destination, Los Arcos, as we had decided to take a rest the following day and bus into Logrono, the next planned stop on the way; also to stay in a private room to break the albergue routine. I’d booked a double room, one downside of the albergue experience is not being able to sleep with your mate unless you want to do so in a cramped single wide bunk bed. We were greeted by our English speaking host at Pension Los Arcos and given some options for dining later in the day, very few in the end as this is a pretty small town.

With some time to kill before dinner, I went out in search of a market or kiosk to purchase some beer or a bottle of wine, a fruitless endeavor as the only discernible store in town wouldn’t open again until 7:00 pm. So we killed time in the room before heading over to the town square where two restaurants served hungry pilgrims, most of whom we knew from our week of hiking. We decided against a pilgrim menu, instead opting for a beer to start, then an order of Calamari, a combo pizza, and delightfully refreshing pitcher of Sangria. 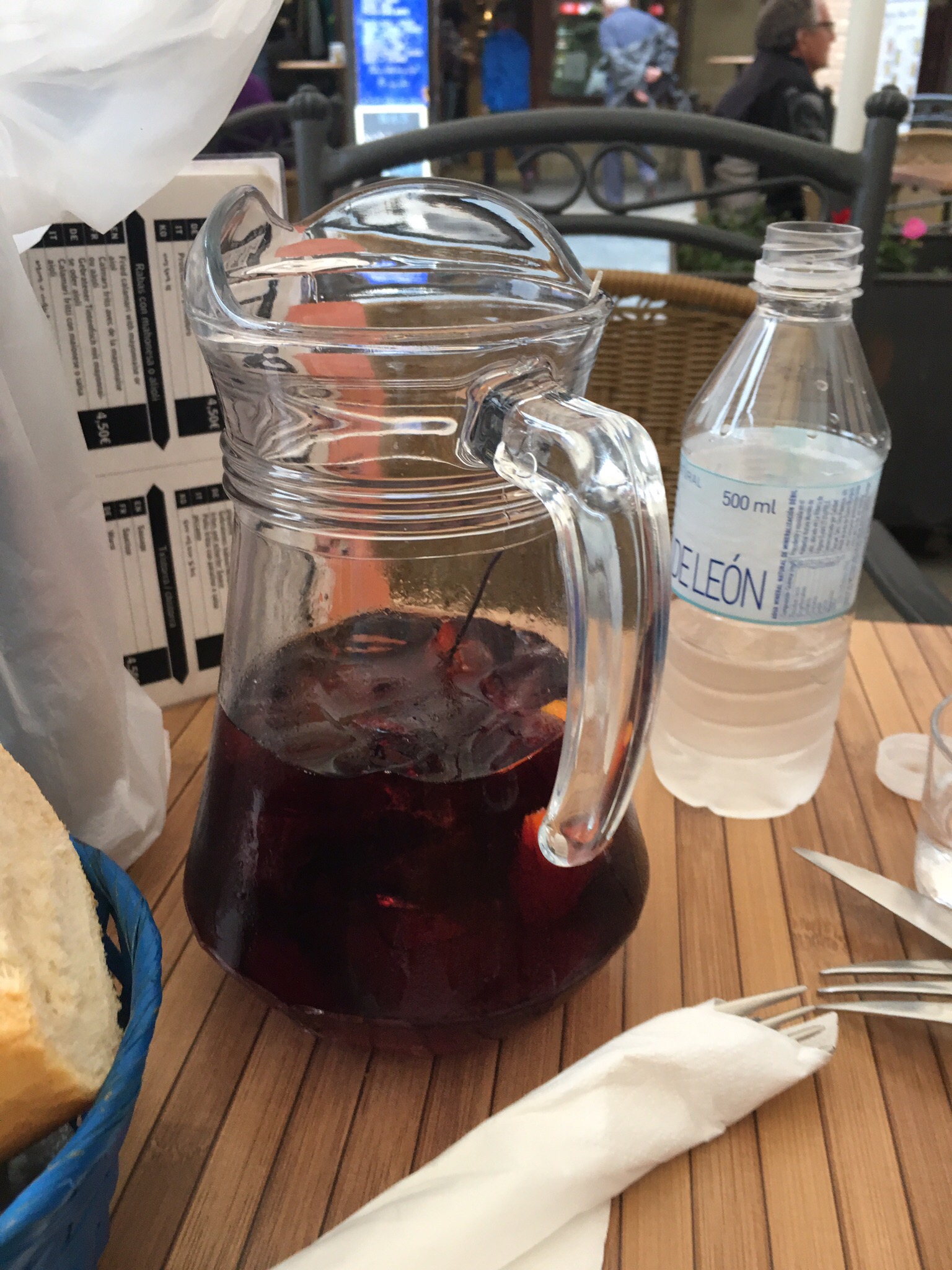 The calamari was the highlight, a nice sized portion, lightly breaded, moist and tender squid that melted in your mouth when you followed each bit with a sip of the Sangria. We finished and paid the tab, 22 euros, right around $25 for simple but very good meal. 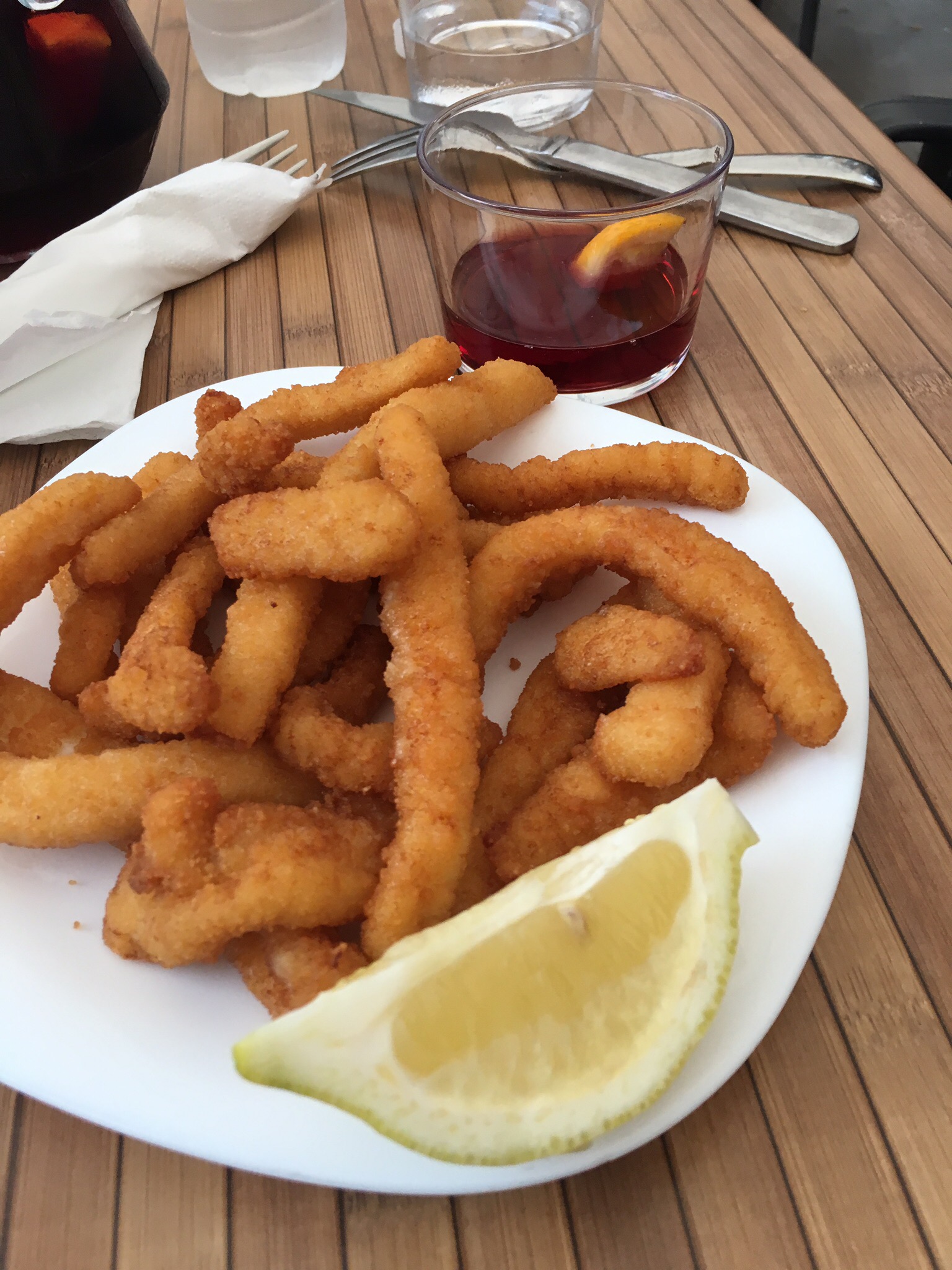 As we had some time to kill the next morning given the bus for Logrono didn’t leave until around 11:40am, we walked over to the Bar Abascal adjacent to the bus stop for coffee and a serving of tortilla (the Spanish potato quiche like item, ubiquitous throughout the country), this one with ham and cheese. Elliot and Sally (the two girls from Portland we spent time with each day) were there as well and as time went on, more and more folks joined us to wait for the bus. In the end more than a dozen had opted for the ride, it being a week into the walk and many kilometers (27.6 or 17.1 miles) to cover that day. 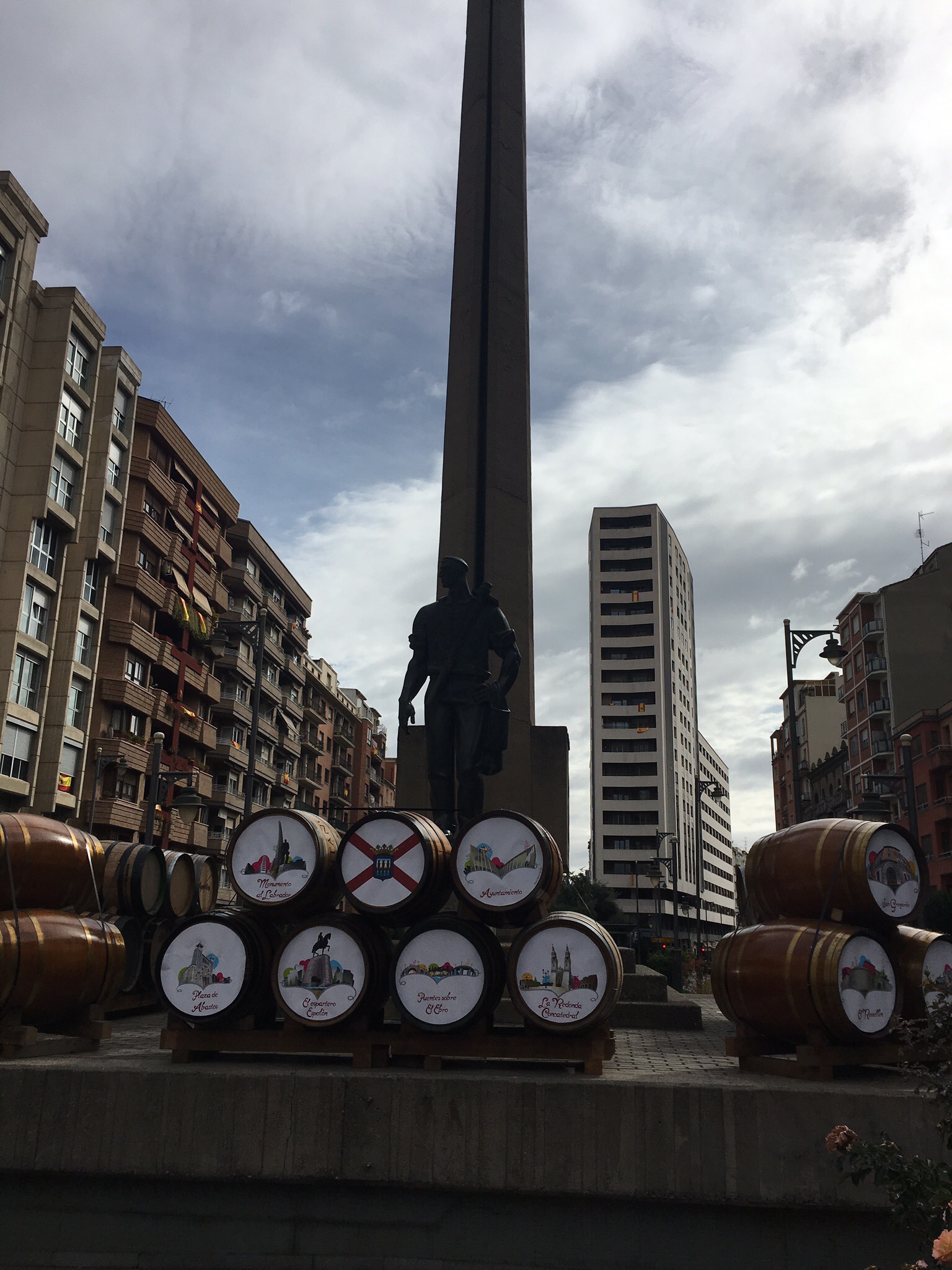 We arrived in Logrono in the early afternoon and after checking out a bus to Ventosa, about 12 miles down the road as we thought we might bus there and then walk to Asofra, about ten miles to try and take a load off my back. It turned out that the bus wouldn’t be an option and so we decided to hit an outfitter. Planeta Aqua, in town for me to purchase a small day pack and begin shipping my big pack and its contents down the road as well, hoping that taking any extra weight off would provide relief.

Jacotrans, The Firm We Used for Bag Transport

We checked into our lodging, Santiago Apostol, a large place with nearly 80 beds that would end up being almost deserted that day and night (we would share a six bunk room with just one person) and walked over to a kebab place we noticed for lunch, a chicken wrap for Joanna and I a falafel, a filling and refreshing change of pace from our standard diet of Spanish food. 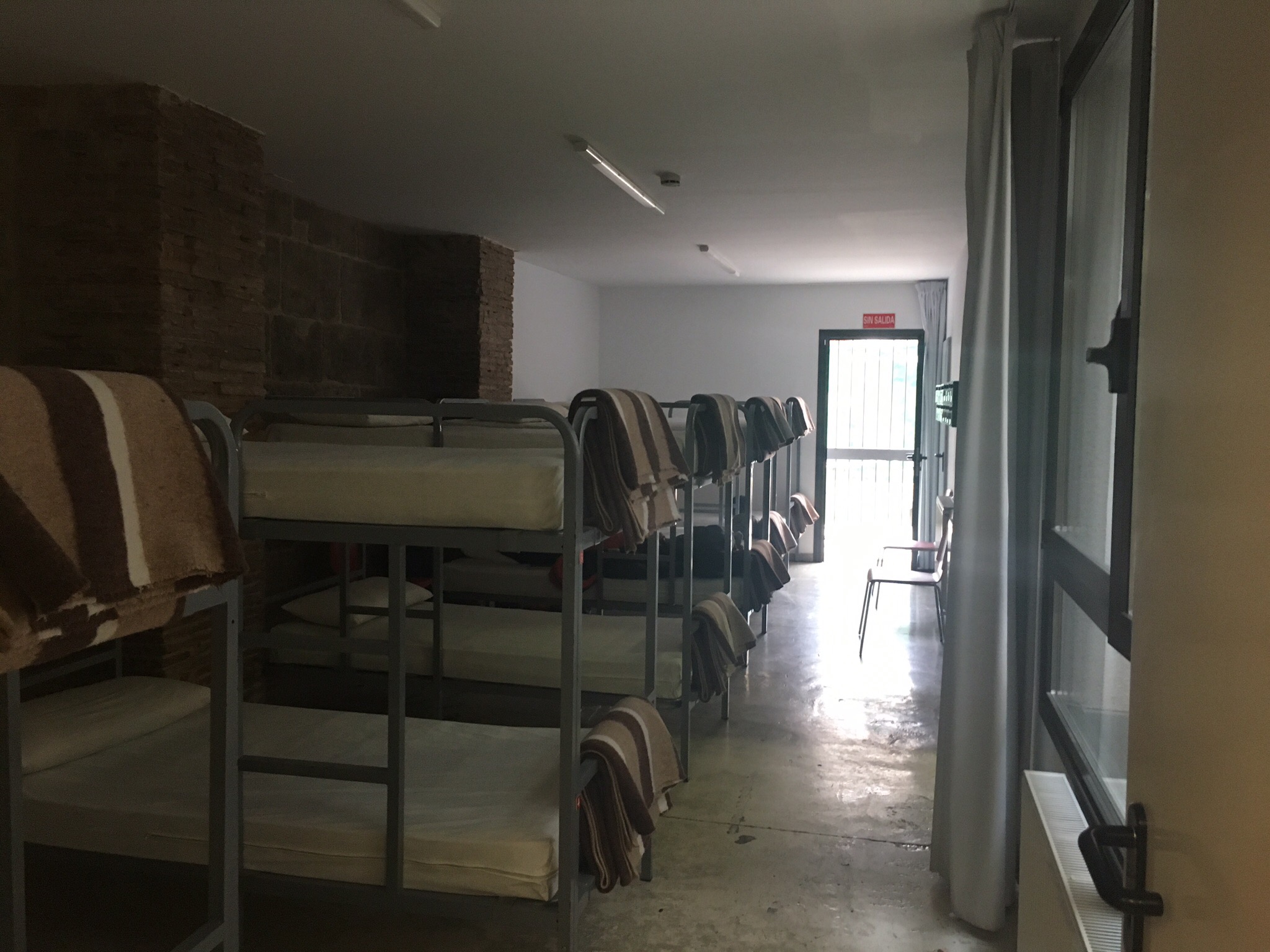 Later in the day, we walked over to Planeta Aqua; it being Sunday, even though its website indicated the store would be open at 5:00pm, that was not the case. After waiting 30 minutes we gave up hope and walked to a nearby super market to pick up some supplies for supper, soft cheese, a package of sliced salami, a package of small pieces of toast, yoghurt for breakfast, a bottle of Rioja (Crianza) and finally having located it, a bottle of Port, some of which we would consume and the rest to be carried in the water bottle, which would soon become empty of the Irache we’d brought with us.

We decided to cut the next stages long walk of 18.4 miles to Najera into two stages, a shorter 8 miles to Navarrete and a longer 11 miles the next day. With less distance to cover the first day, we could afford to wait until Planeta Aqua opened at 9:30 to see if we could get the right sized pack. What would the morning would bring?