The train ride to Leon took a little under thirty minutes and once there we again took a taxi, for 6.5 euros, to our lodging, a return visit to Check-In Leon.  We’d been so impressed with the uncrowded and clean conditions there when passing through the first time that for the money we wouldn’t mind sharing space one more time.

This would be a different experience though.  It was crowded and noisy and our second night both top bunks were occupied owing to a crowded house.  We figured that it was due to the time of the season when a number of the private albergues close up shop putting pressure on those remain open.  We would still have nice stay here but not as good as the one prior. 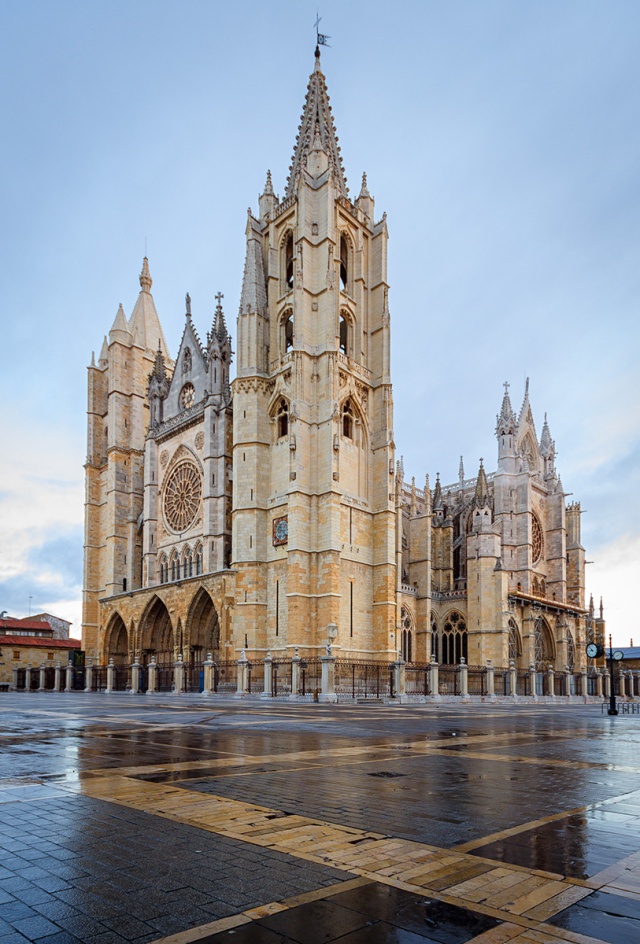 We took a local bus into the historic center and did a full tour of the Leon Cathedral, one of my favorites of the whole trip.  Built in response to the one in Burgos, which would take over two centuries to complete, Leon’s would need only 50 years and its unifying design and sense of purpose make it an awe-inspiring sight.  With a focus on creating a simple, purely gothic cathedral to show-case its grand stained-glass windows, it deserves its nickname of The House of Light.

With 737 or 20,450 square feet of stained glass, light changes as the sun moves across the sky each day.  The interior themes reflect the quality of light that shines on them; above the main door a colorful Virgin Mary with 12 angels receives the best light to enhance the colors, at the front alter, the north side which receives less light, blue dominates symbolizing darkness and obscurity.  And on the south side, which is bathed in light much of the day, brightness enhances a greater variety of colors.

We toured the cathedral museum and then took off for the part of Leon known as the Barrio Humedo, south of Calle Ancha.  Here in the “wet quarter”, one can still rely on receiving one free tapa for each drink ordered.  We started at Meson el Tizon where we had a couple of glasses of wine and tapas, then on to Bar Rebote, for more drinks and an order of their famous croquettes.  At our last stop, Los Cazuros, we had pieces of toast topped with ham accompanied by creamy potatoes. 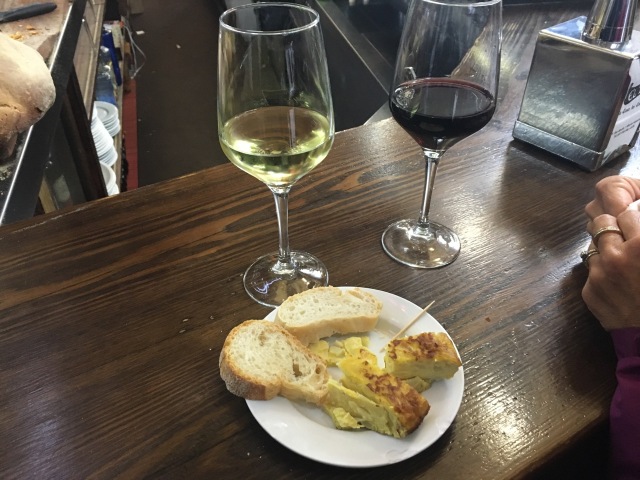 We’d had a fine evening, consuming five glasses of wine and two beers between us and eaten our fill, all for the princely sum of 14.20 euros, or roughly $17.50.  A fun, filling, and entertaining way to spend an evening.  The next morning, we returned to historic Leon to tour the Museo Sierra-Pambley, the house of Segundo Sierra-Pambley, built in 1848 on the plaza facing the cathedral. 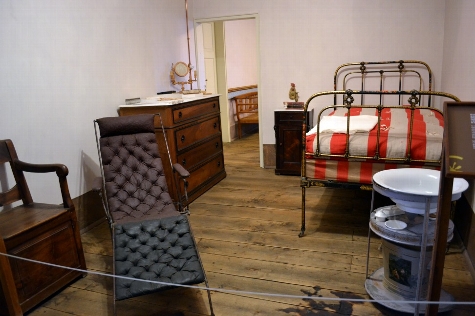 Original Bedroom Furniture – Note there are no carpets

It contains all of the original furnishings including wallpaper and carpets (a novelty at that time), furniture, crockery and cutlery.  It shows, as many of the houses we tour, the life and tastes of individuals that lived there, in this case an enlightened family of 19th century Spain.  Unfortunately, we’d missed one of the few tours in English and instead followed one in Spanish, picking up information here and there, some of which was available in printed form at various points in the house.

One of the Offices used by the Family

Finished with the tour we walked a block over to Calle Ancha to stop in for a snack at Valor, a Spanish chocolate making company founded in 1881 where we shared an order of Churros and four kinds of dipping chocolate, washing it down with café con leche.  While there we were joined by one of our bunkmates from Check-In Leon, an older gentleman who was laying up for a few days with a bum knee awaiting the arrival of his son who had continued hiking.

It was one of those pleasant informal interludes one gets on the Camino and it reminded us that we were still pilgrims, even though we weren’t actively on the trail.  Having finished up our chocolate treat we embarked on the hour long self-guided walk in the St. Steves tour book, which took us back to many sights we were already familiar with besides one, the Gaudi constructed Casa de Botines.  Designed and built in the 1890’s, it was restored in 1994 after having deteriorated under prior ownership. 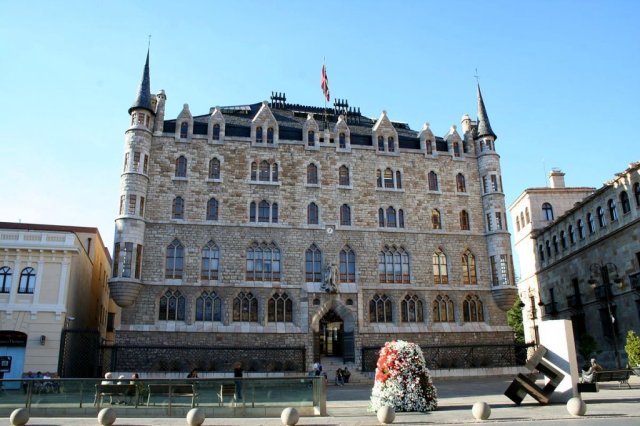 They were closing for the afternoon break so we opted not to tour the building, instead completing our walking outing and ending back up by the Cathedral just in time to drop in at Four Lions Brewery for a beer and tapas.  This was a comfortable place to have a beer, with nice indoor and outdoor seating.  We chose to take a seat at the bar and enjoyed three different beers, the American Pale Ale (the best of them all), a Coffee Stout (nice but not outstanding) and their version of an IPA (low IBU but nice citrus finish), each accompanied by a piece of bread with ham.

Refreshed and rehydrated we decided to return to Check-In Leon, stopping first at the nearby Carrefour to pick up ingredients for dinner and the next morning’s breakfast.  We’d had a nice two days return to Leon having enjoyed our second visit to the Cathedral and the fun evening in the Barrio Humedo.  Our sleep that night was interrupted a few times by noisy neighbors, my top bunk mate crawling in sometime after midnight.  It was a gentle reminder that life in the albergue is not always a positive thing, but it is also rarely an awful thing.  We’d just have to recover in Burgos.

Our Pod at Check-In Leon