For the next part of our visit to Greece, we decided to do something we’d not done before as travelers, that is take a five-day guided bus tour which would cover the major sites of the Peloponnese.  Using Trip Advisor as a guide for references and checking out various options, we settled on a five day/four night tour through Fantasy Travel, as it seemed to offer the most number of sites at a price that wasn’t much more than if we were to rent a car and do the tour ourselves.

The rate for each of us for the five days was 560 euros for a B Category hotel.  After careful consideration we decided to spend the additional 90 euros apiece and upgrade to the A Category hotels as a treat.  It would be a decision we would not regret as our first night’s stay in Nafplia was worth the entire cost of the upgrade alone. 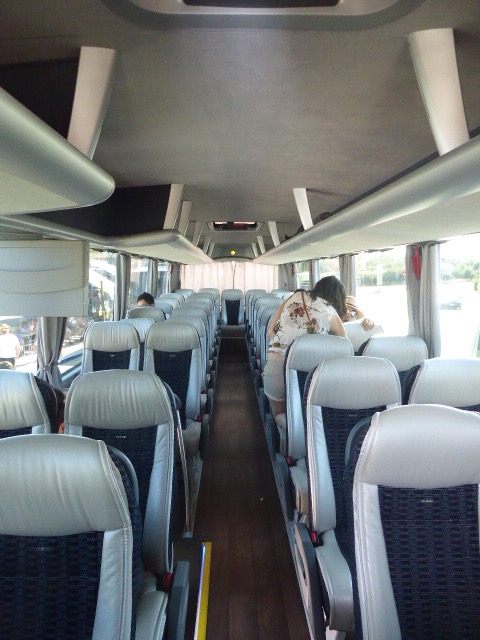 On the Go Bus

We were to meet the tour at a nearby hotel early on Monday; we got there a little too early and waited 30 minutes or so for the bus to arrive.  As we would continue to discover throughout our time in Greece, the folks you interact with are universally pleasant, friendly, and glad that you are there.  Thus was our interaction with the bellhop at our pick up hotel.  When our bus arrived, we were introduced to a third party who would accompany us for the rest of the trip, Jenny Manetta.

After I had made the payment for our tour I received a confirmation and not checking it that closely, did not pick up that they had listed my last name as Manetta.  And when the tour came to get us we almost missed it as they kept calling for Jenny Manetta, out new name for the rest of the tour.  Our bus wasn’t too crowded as we made our way out of Athens and headed towards the Corinth Canal.  A good sign we thought as we settled into our seats and surveyed our fellow passengers, only a few of who would be with us for the rest of the tour. 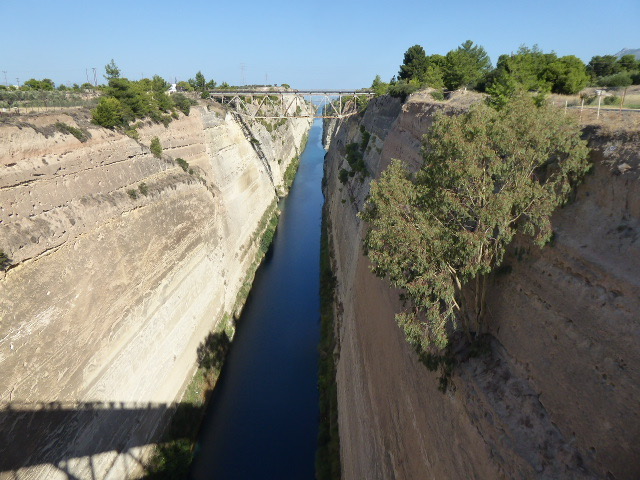 The canal connects the Gulf of Corinth with the Saronic Gulf in the Aegean Sea, cutting through the narrow Isthmus of Corinth that separates the Peloponnese from the Greek mainland, effectively making the peninsula an island.  Completed in 1893, it sits at sea level; no locks are employed throughout its 4-mile length.  Unfortunately, at only 70 feet wide at its base, it is impassable for most modern ships and now has little economic importance, used mainly for tourist traffic. 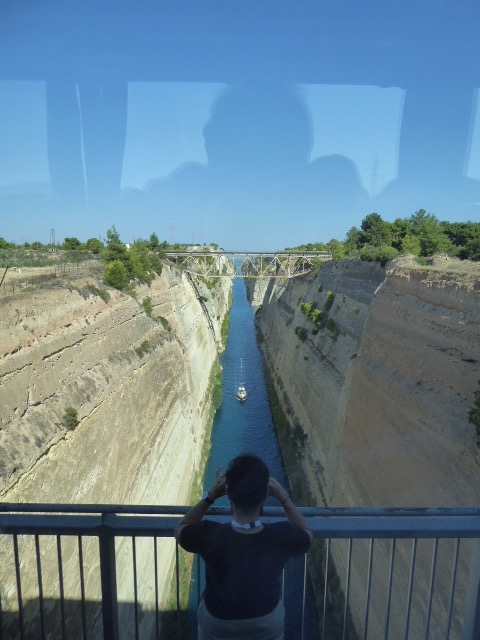 Boat in the Canal

Our next stop, not too far down the road was at the Ancient (Great) Theatre of Epidaurus.  Constructed by the architect Polykleitos the Younger in 340 BC., it had a maximum capacity of 13,000 to 14,000 spectators, hosting music, singing and dramatic games that were included in the worship of Asclepius.  It is considered to be the most perfect ancient Greek theatre with regard to acoustics and aesthetics. 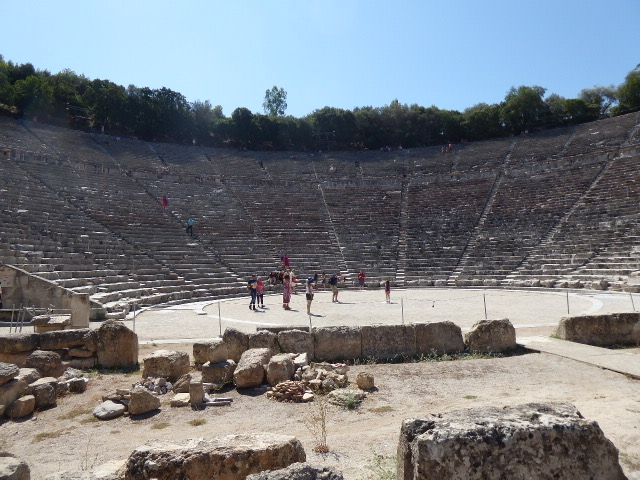 To test this assertion Joanna walked up to the top most aisle of the theater while I stood in the center of the performance area and then spoke her name at moderate volume.  She reported that she could easily hear what I had said.  We left the theater to walk the rest of the site, including the small museum and this is when we first encountered the one downside of being on a regimented guided tour, that is, your time isn’t your own.  We’d often find that we needed another hour or more to fully appreciate the site and yet had to move on in order to stay on schedule.  But this is also the upside of organized tours, they keep you on schedule and thus maximize your sightseeing. 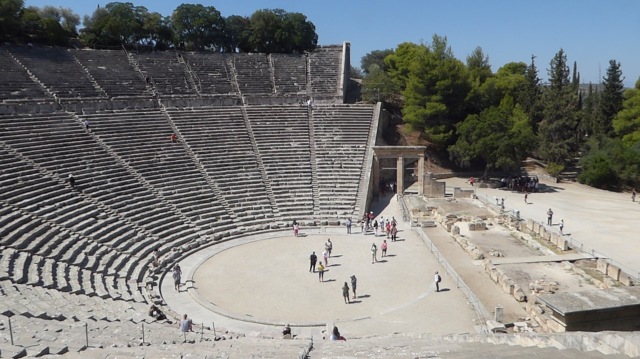 From the Top Row

Back on the bus it was a long drive to our destination for the night, the city of Nafplia and the Nafplia Palace Hotel.  Here is my review of the property in Trip Advisor:

When booking the tour we decided to take a chance and pay about $100 apiece to upgrade to first class hotels, not knowing if it would make a difference.  Given our first night’s experience here, I’d say it was a good choice. As many of the reviews correctly state, this is a property badly in need of maintenance and refurbishment.  Put that aside though and what you get is a five-star location and service that is equally good.  The substantial and high-quality breakfast buffet is one of the best we’ve encountered.  And for the same price I paid to stay at a Marriott Courtyard in Oakland I get a million-dollar view.  I’d stay here again.

We checked in and then took the elevator down to the harbor side, exiting through the bunker tunnel to do a quick walking tour of the town.  This charming port town is popular both with tourists and Greeks given it is only 2.5 hours away from Athens. 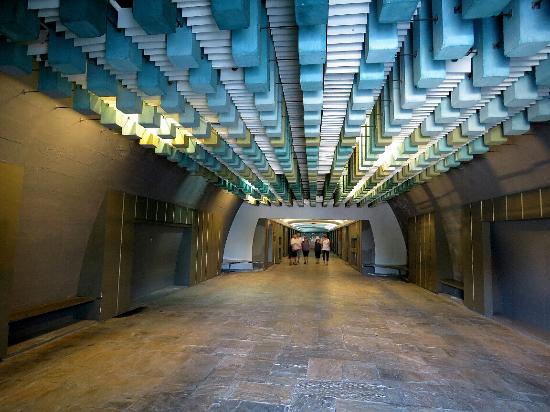 The Tunnel in the Bunker

It’s strategic location, nestled under cliffs at the apex of a vast bay, meant its control changed hands many times between the Ottomans and the Venetians.

Church of St. Mary Above All Saints

Light on sightseeing opportunities, we completed our self-guided St. Steves walking tour in about 90 minutes, starting at Square of Friends at the Waterfront, moving on to the Church of St. Mary Above All Saints, Syntagma Square and other various sites.

We stopped at a small shop to buy a bottle of rose, returned to the room and enjoyed a quiet afternoon until dinner time, sitting on our balcony gazing out at the bay as a gentle breeze cooled us down.

View from our Room

For the duration of our tour we would get breakfast and dinner each day.  With the upgraded hotels, this would mean a high quality all you can eat buffet at breakfast and most dinners.  This night though, as we were just a small group (we’d join the main group the next day) we would pick from a menu.

We were seated at the outside terrace of the hotel’s restaurant and the service was excellent, the staff attentive and with a uniformly good command of English.  We ordered a bottle of white Greek Wine and savored it during dinner, chicken for me and fish for Joanna.  It was a beautiful evening, warm and pleasant out and the minutes slipped away as we ate and watched the sun set behind the mountains that ringed the harbor.

The Evening Slips Away

With the morning free until we were to meet the tour bus at noon, we lingered a bit over our breakfast, eating outdoors on a different terrace, then with our luggage packed and ready went back down to the harbor and did a three-mile out and back hike to the other side of the bay to Karathona Beach, one of many that dot the shoreline.

On the return, we took a shortcut to walk up the steep hill towards the hotel, pausing to look at an abandoned apartment house overlooking the bay.

View Up the Coast

We would continue to see these reminders of the collapse of the Greek economy in the wake of the recession of 2008.  Starting in late 2009, structural weaknesses in the Greek economy, and revelations that previous data on government debt levels and deficits had been undercounted by the Greek government led to an economic crisis.  It reached the populace as a series of sudden reforms and austerity measures that led to impoverishment and loss of income and property. 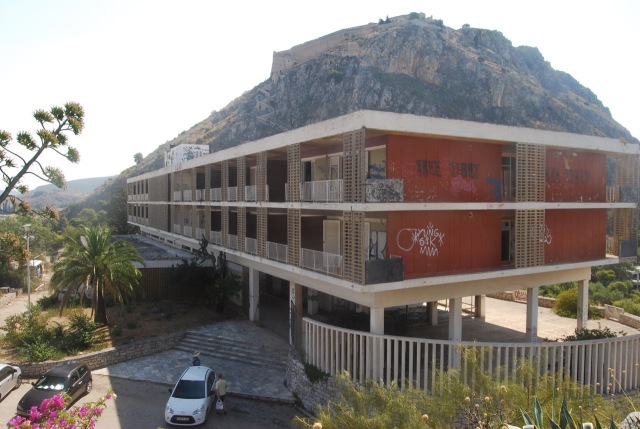 The government enacted 12 rounds of tax increases, spending cuts, and reforms from 2010 to 2016, which at times triggered local riots and nationwide protests.  Despite these efforts, the country required bailout loans in 2010, 2012, and 2015 from the International Monetary Fund, and the European Central Bank. 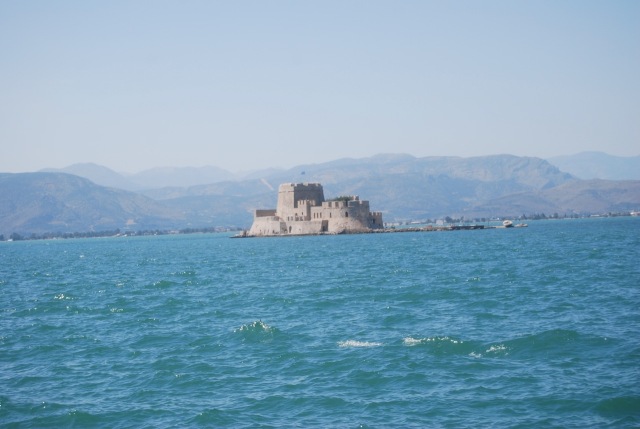 The Fortress in the Harbor

As you travel through Greece, one finds any number of abandoned structures; in Athens, we saw a tall office building completely closed down and the impact would hurt towns like Nafplia, which relies on Athenians as well as tourists for its livelihood.  The upside for tourists is lower prices and a desire to make them happy on the part of Greeks.

Sunset in the Harbor

It had been a fine start to our five-day guided tour.  We weren’t sure how the rest of the week would play out but would soon find out as our bus pulled into the parking lot and we prepared to board.  Would it be worth the money or a waste of time?  We would soon find out.