We hung out at the condo in the morning catching up on chores; for us the blog and washing clothes, for Francois working on lesson plans for the class for social workers he teaches and taking care of duties for the professional association he is a part of.  Right around beer o’clock we popped our first Kronebourg 1664 and the day was off to a good start. 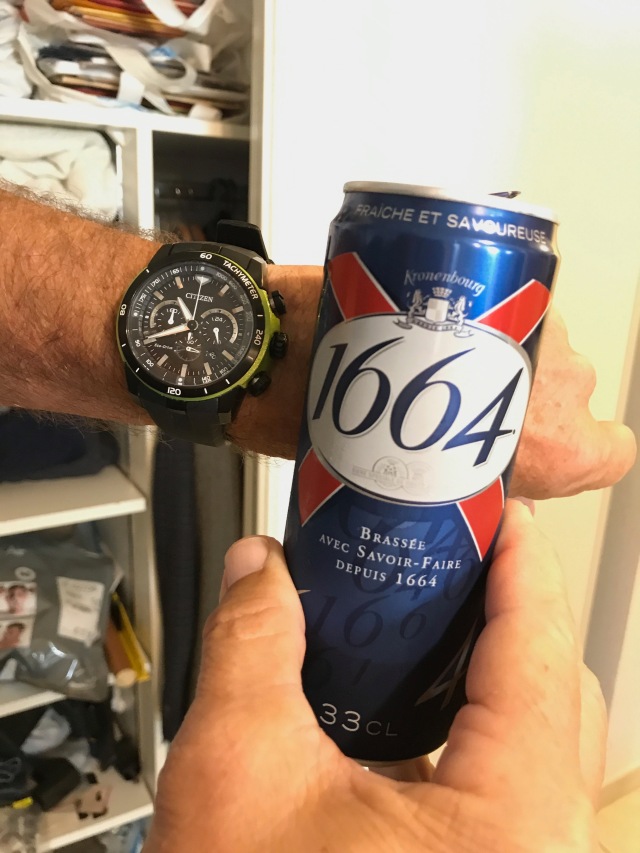 As planned we set out late in the morning for the Camargue.  This is the same area we spent the day in during 2014 when we camped in Montpellier.  The Tour de France came through on a Sunday and we drove to the small town of Beaucaire, adjacent to Tarascon on one side of the Le Rhone, arriving around 1:00pm.  We set up camp and prepared to wait for our Tour afternoon.  If you’d like to read what I wrote about it that day, you can view my blog post at: https://wordpress.com/post/3jmann.com/1188 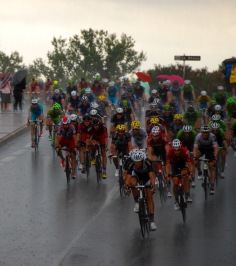 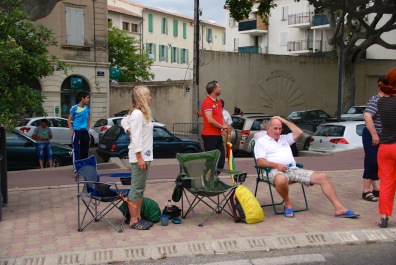 Waiting for the Tour

The Camargue is a natural region located south of Arles, France, between the Mediterranean Sea and the two arms of the Rhône delta. Approximately a third of the region is either lakes or marshland.

Montpellier to the Camargue

The central area around the shoreline of the Étang de Vaccarès has been protected as a regional park since 1927, in recognition of its great importance as a haven for wild birds.  In 2008, it was incorporated into the larger Parc naturel régional de Camargue. 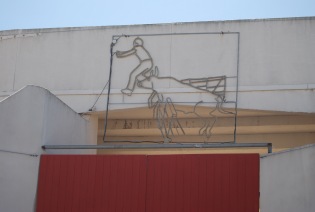 A Bull in Action 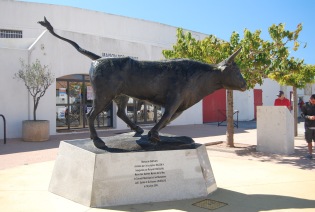 Parking in a lot on the outskirts of Saintes-Maries-de-la-Mer, we walked into this charming little sea side town.  After checking out boat schedules for a tour we would take later, we stopped briefly at the bullring (the area is also famous for its cattle) but didn’t go in and, as it had been at least two hours since our last beer, stopped in at a waterfront restaurant for some liquid refreshment and a mid-day snack. 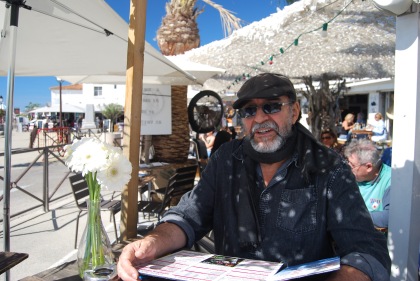 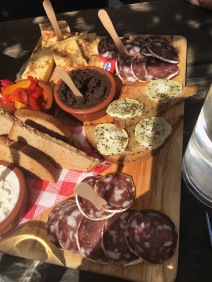 We ordered a beer apiece and a charcuterie platter, more than enough to hold us over until that night, spending a very pleasant hour or so sitting in the warm sun and discussing a plan for the rest of the afternoon.  We decided to take the boat tour up the river to see the horses, which is what we did for a reasonable 12 euros apiece. 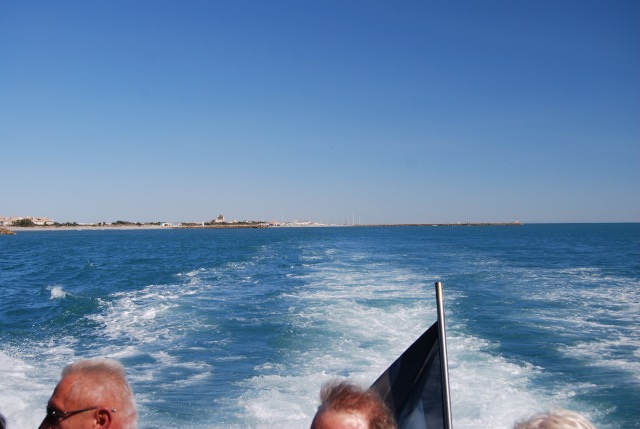 On the Boat in Open Water

The going was a bit rough as we left the harbor but smoothed out once we hit the mouth of the Rhone and started upstream.  After some time, we came upon a plot of land, likely owned by or affiliated with the boat tours, which was home to a number of the horses and cattle. 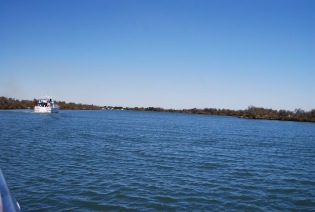 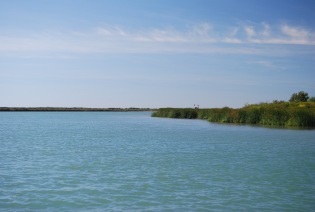 These are lovely animals and the origins of the  horses of Camargue remain relatively unknown, although they are generally considered one of the oldest breeds of horses in the world.  When they live in semi-feral conditions (not the case for the ones we viewed) they develop the stamina, hardiness and agility for which they are known today. 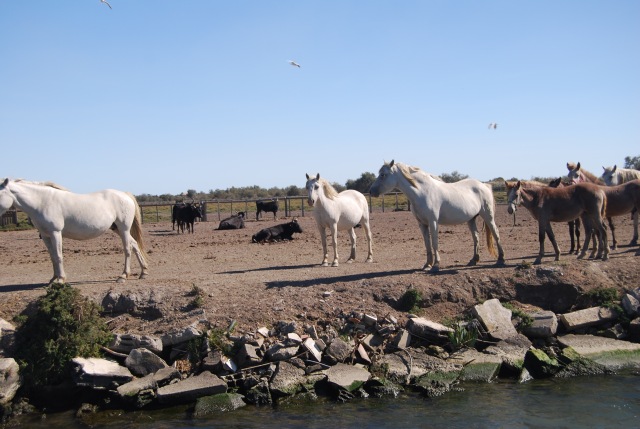 We returned to the harbor, left the boat and walked into the center of town, spending a little time touring the inside of the Church of the Saintes Maries de la Mer, built from the 9th to the 12th century, as a fortress and a refuge. 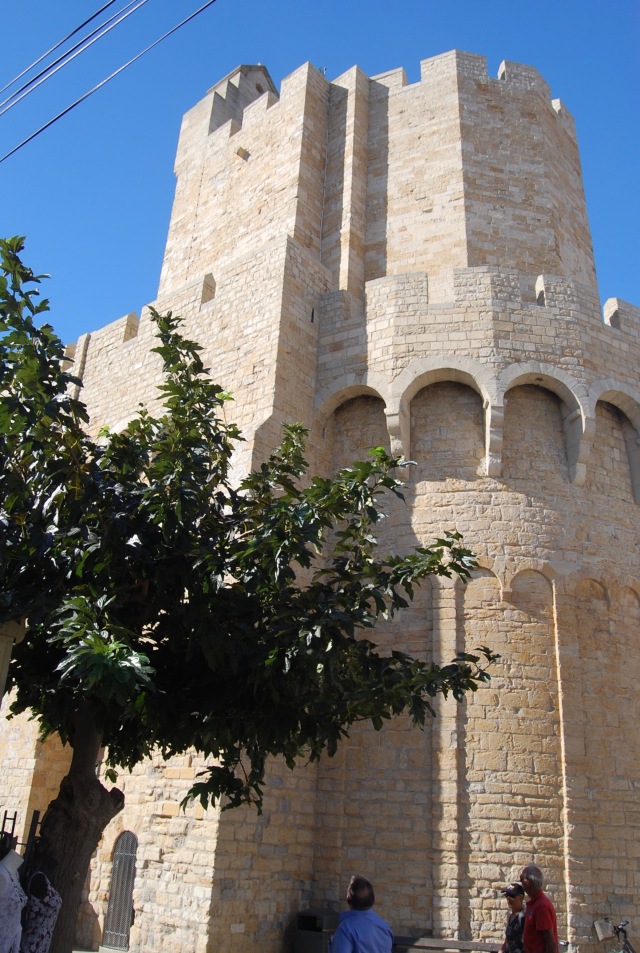 We wrapped it up in town and drove back to the condo where a little later, Joanna and I would prepare a dinner commemorating Francois’ visit to us in Los Angeles in 1980, crispy tacos. 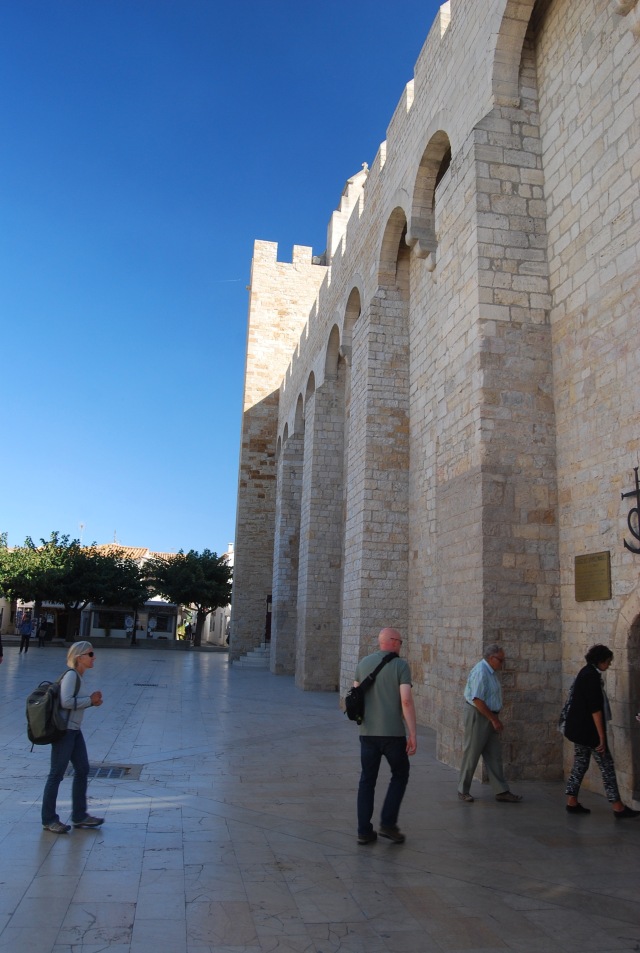 We bought as many ingredients as we could at the local Carrefour and fell to preparation with enthusiasm, fueled by many Kronenbourg 1664’s.  The tacos actually turned out pretty good, inadequate corn tortillas the only real hitch, and provided us with the high fat fuel we would need for our evening’s pursuit, a late-night run through a number of the bars Francois frequents. 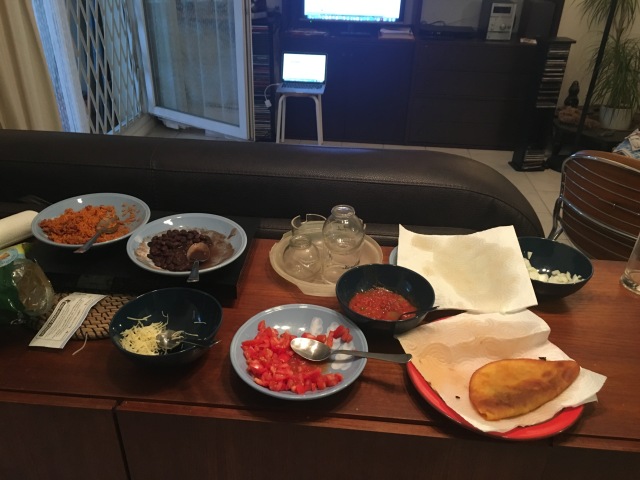 This excursion was yet another example of the beauties of transport on the metro.  No worries about parking and more importantly, driving after drinking with the side benefit that walking to and from bars and to home helps to clear the head. 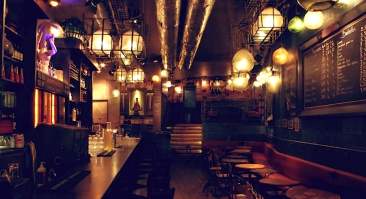 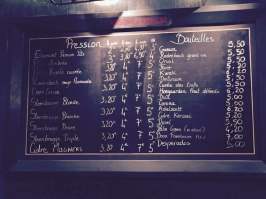 Our first stop was another favorite for Francois, La FaBRIK, where he knows the owner and is a big fan of one of their weekly events, a live band Karaoke, which we would participate in on one of our return visits. 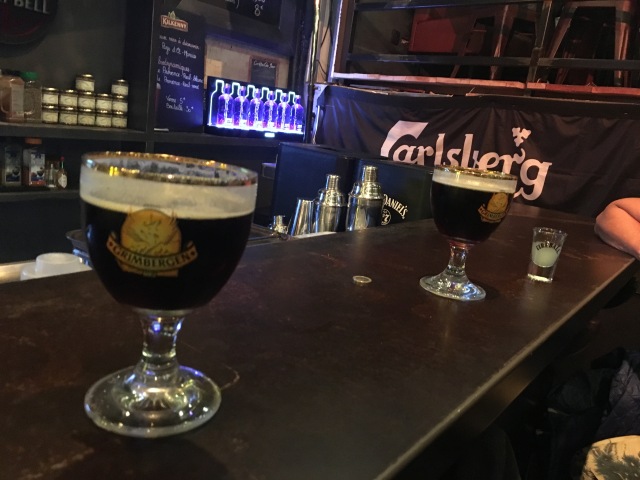 Francois and I each got a Belgian Dubbel while Joanna tried one of the flavored vodkas they keep in small vats behind the bar. 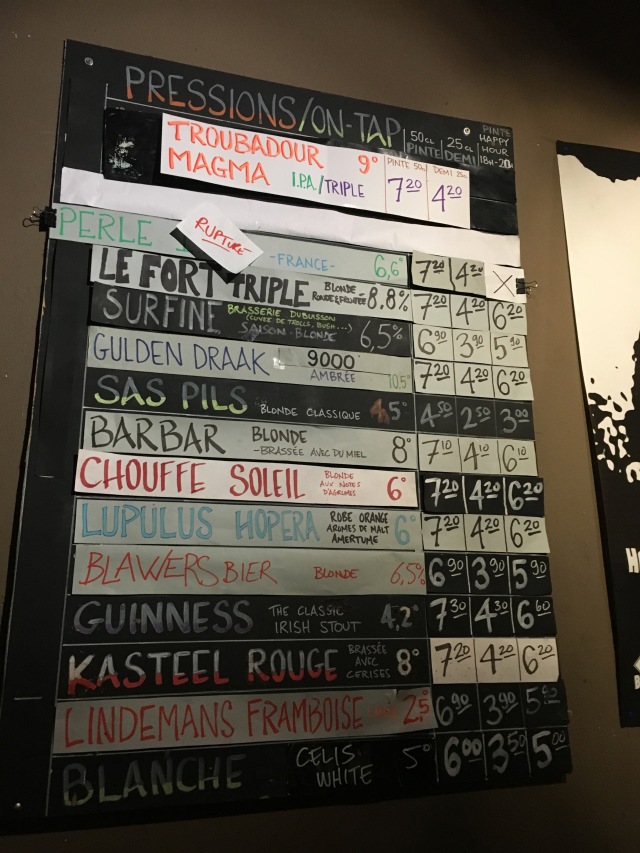 Beer Selection at The Black Sheep

Our next stop was another good spot, The Black Sheep, which is managed by an American couple from the West Coast, providing us with a sense of what it might be like for an Ex-Pat to live here.  With their excellent beer selection, I chose another high gravity Belgian and settled in for some conversation. 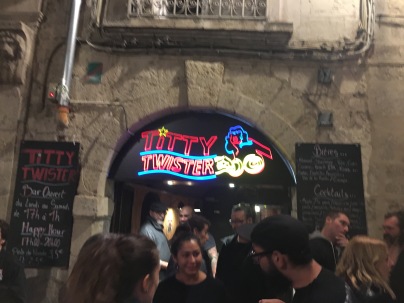 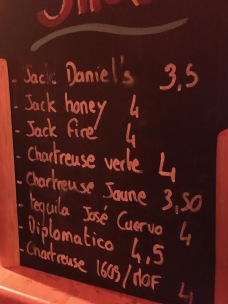 Our last stop for the night was the Titty Twister, a fairly new place that was jumping when we arrived.  We switched it up from beer to a shot or so of their reasonably priced liquors and layered some popcorn on top of the mix of ingredients we had percolating in our stomachs.  It was a fine way to end the evening. 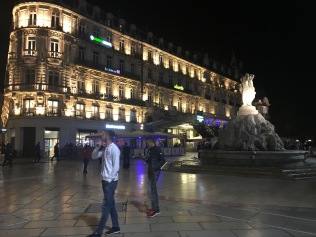 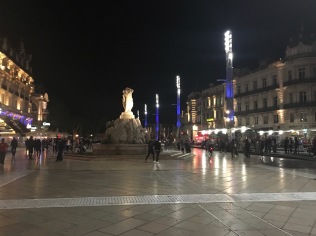 We managed to catch one of the last trams back to the condo and staggered into bed well after midnight, quite late for us senior citizens.  It had been years since we’d stayed until the early morning hours, let alone combined with drinking.  We’d pay a small price for it the next morning, but nothing that the day trip to Nimes we had planned wouldn’t fix.  We’d been truly welcomed in Montpellier. 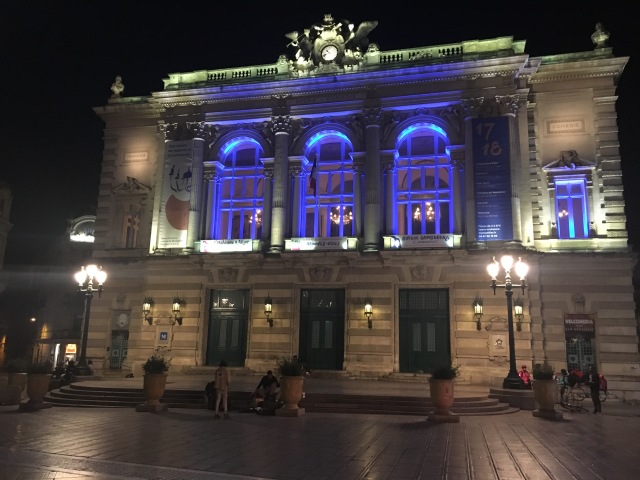