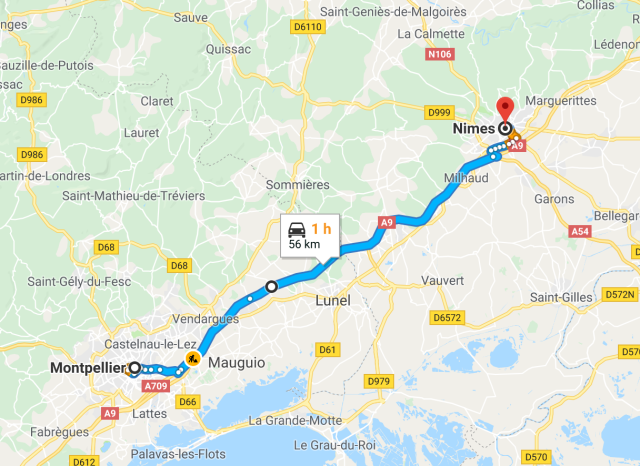 After sleeping in due to our late-night festivities, we set out in the early afternoon for the hour long drive up to Nimes.  We’d have an enjoyable time driving around southern France with Francois, much of it to the constant clamor that emanated from his Tom-Tom GPS device, which seemed to only give instructions to turn left (tournez à gauche).

Francois and His Tom-Tom

Dating back to the Roman Empire when 50,000–60,000 people lived here, Nimes is home to several famous monuments such as the Nîmes Arena and the Maison Carrée.  Because of this, the city is often referred to as the French Rome. 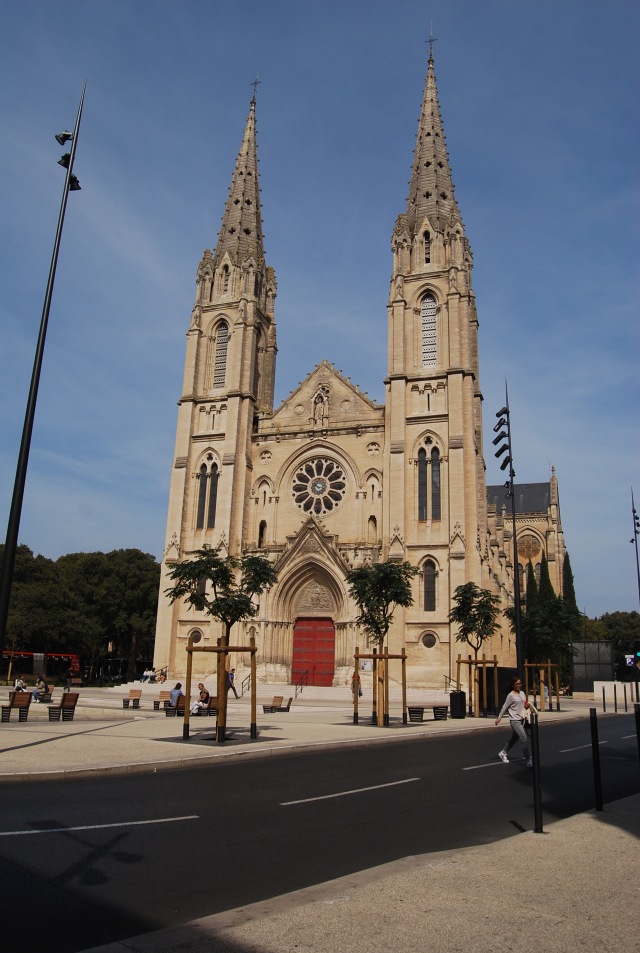 Nîmes became a Roman colony sometime before 28 BC but it was Augustus who made the city the capital of Narbonne province, and gave it all its glory.  Emperor Constantine endowed the city with baths which were fed by the aqueduct that we would view later in the trip when we visited the Pont du Gard.  The town was prosperous until the end of the 3rd century AD – during the 4th and 5th centuries, the nearby town of Arles enjoyed more prosperity until finally, the Visigoths captured the city from the Romans in 473 AD. 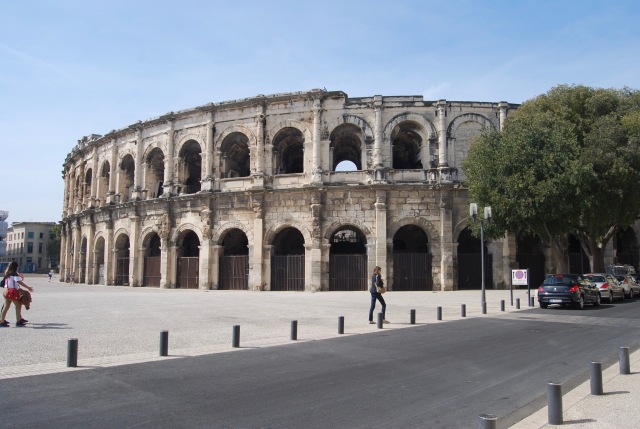 The Arena at Nimes

After parking, we walked to the center of town for our first stop of the day, the Arena of Nimes.  Built around AD 70, following the fall of the Roman Empire, it was transformed into a fortress by the Visigoths.  In the Middle Ages, it became a fortified village with wells, houses, two churches and even a castle, all of which existed up to 1863 when it was remodeled to serve as a bullring.

The Arena as it Was

We found that throughout our trip, many of the historical/religious attractions we visited provided a handset with a tour narrative in your native language.  This was the case with the Arena and it enabled us to spend about ninety minutes visiting the facility.  There was a lot to see as we ascended to the upper levels of the complex.

In Roman times, the monument could hold 24,000 spectators spread over 34 rows of terraces divided into four separate areas or maeniana (balcony or gallery for spectators at a public show in ancient Rome).  Often, the separations were based on class: Primum, which was reserved for the non-senatorial noble class called the Equites, Secundum; which featured the better, lower seats for the wealthy plebeians; and Summum with the upper seats for the poor plebeians.

Arena from Up Top

We made it all the way up to the seats most appropriate for our class, that is poor folks, which put some distance between us and the activities that would have taken place on the floor of the arena; It did afford us a nice view of the surrounding city though.  On the way back down, we stopped to view three separate exhibits, one that explored gladiators in depth, their weaponry, style of fighting and the garments and armor they would wear in combat.

Around the corner was a room depicting the Gladiator’s quarters, with actual weapons and costumes, and a dressed and armored gladiator manniquin ready to set off to fight.  The last exhibit was the Colors of the Corrida (Spanish Bullfighting), with a display of the costumes of the toreros and matadors, real “suits of light” and full-length portraits of five famous toreros. 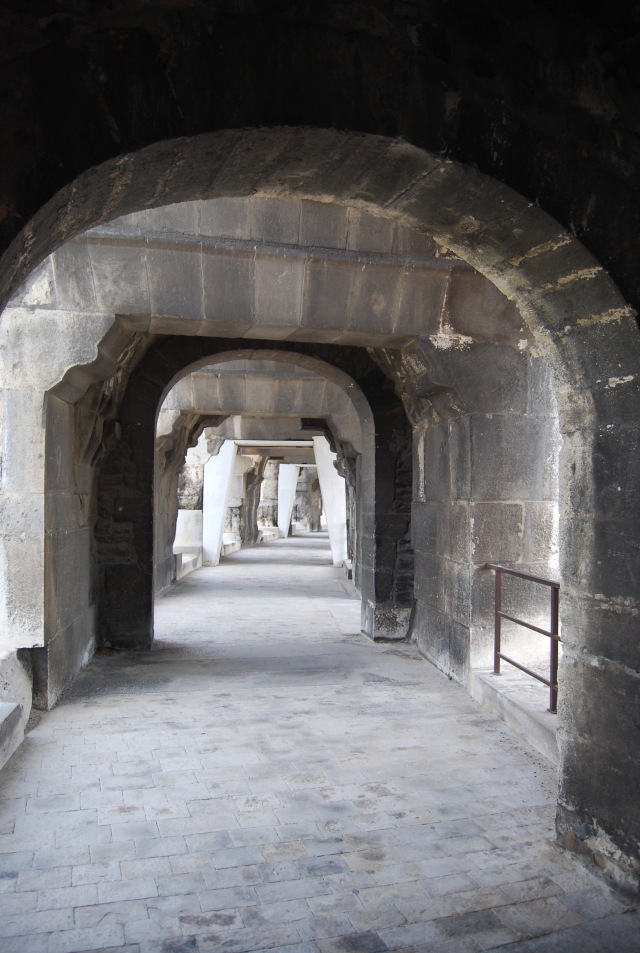 Thoroughly informed we left the Arena and backtracked to the car to move it before our parking time expired, then stopped at a Shawarma joint for some food to get us through the rest of the day.  Joanna and I split a sizable chicken sandwich and drink for a shade under six euros. 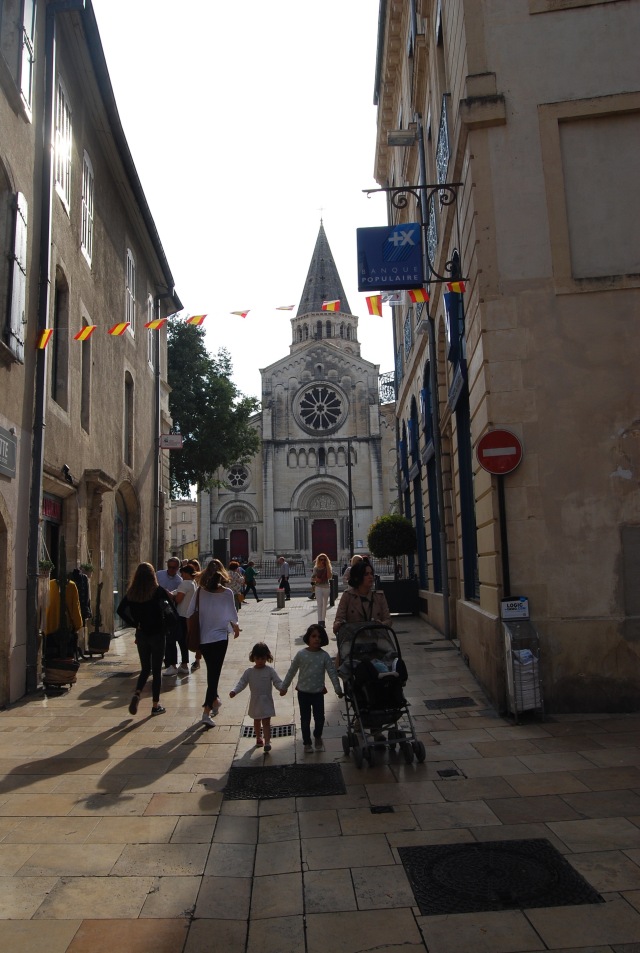 As we walked back into the center of town after eating, we ran across a fountain which featured a sunning crocodile.  A bit of research informed us that symbol was brought to the city by its early Romans settlers.  Around 31 BC, Roman general Octavius defeated Anthony and Cleopatra to conquer Egypt and become Emperor Caesar Augustus. 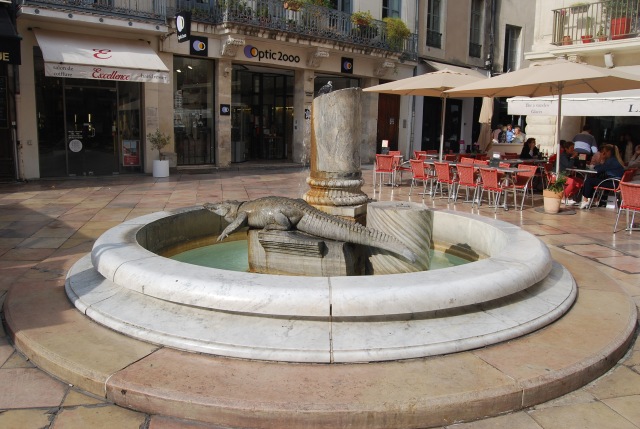 As a reward to his legionnaires for their many years of service and this victorious campaign, Augustus granted them lands in the then new Roman colony of Nemausus, which became modern Nimes.  Around this time, a coin was struck with a crocodile chained to a palm tree on one side to symbolize the conquest of Egypt.  So, it was the idea of the crocodile and palm tree rather than the actual flora and fauna which immigrated to Nemausus and laid the foundations for today’s crocodile on a fountain.

Our last stop of the day was at the Maison Carrée (Square House), a small Roman temple built in 19 BC and dedicated to Gaius Caesar and Lucius Caesar, grandsons and adopted heirs of Augustus who both died young.  One of the best-preserved Roman temples anywhere, Inside nothing remains of ancient Nimes, instead it is used to screen a film on the Roman history of the city and the surrounding area.

As it was getting late in the day, we returned to the car and drove back to the condo for an early evening,  Joanna and I needing to complete our packing for an early departure for St. Jean Pied de Port and the beginning of our adventure on the Camino de Santiago. 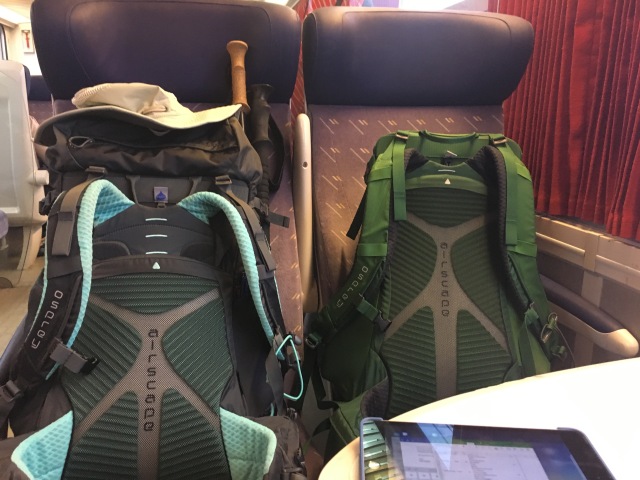 Our first visit to Montpellier in 2014 was a low-key affair; this time around Francois made sure we were properly introduced to this vibrant city, full of food, music, and drink.  We’d be back twice more and looked forward to each of those visits.  But for now, on to the Camino.

(Editor’s Note: Please remember that we’re doing this out of order, having covered the Camino starting with this post: https://wordpress.com/post/3jmann.com/7387)