Our plan for Provence was fairly simple and constrained by the relatively few days we had to explore this fairly large area of France.  We’d spend three nights in the town of Arles and then relocate not too far away in L’isle Sur-la-Sorgue for two nights before returning to Montpellier.

We’d be taking the train to Arles, the first of two stays in Provence, later in the morning and so had time for yet another full breakfast with Francois.  I’ve commented on them before as they are such a sharp contrast to our normal routine in which I usually consume cottage cheese and fruit three times a week with cereal and oatmeal filling out the rest.  It’s not likely that we will eat a Francois breakfast at home (I’m not sure he eats it either everyday) but when in France, we do it his way. 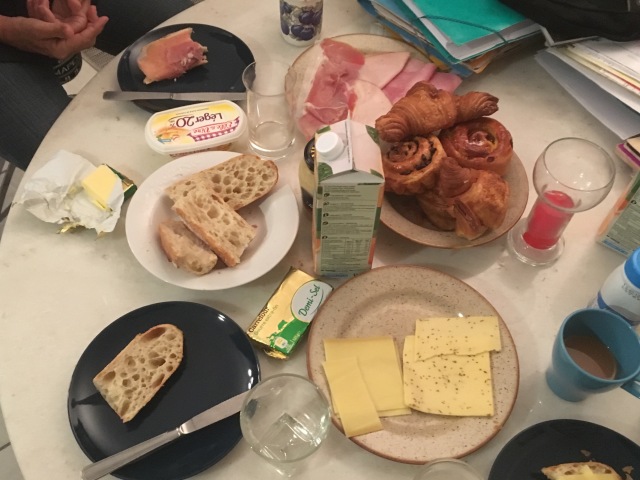 The tram took us to the central station for the one hour train ride (33 euros for the both of us), to Arles embarking at the station and walking about a kilometer through the heart of town to our lodging for the stay, the Best Western Hotel Atrium (157 euros for three nights).

Walk to the Best Western

One aspect of our travels on this trip was the reinforcement that one need not spend boatloads of money to obtain good quality lodging.  Such was the case with this Best Western, one of the nicer places we had the pleasure to stay in all for the princely sum of approximately $60 a night. 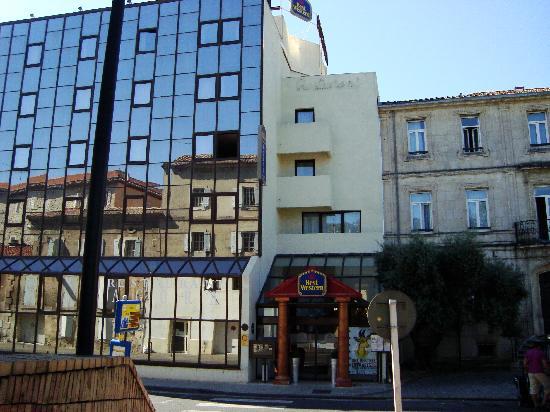 I popped into a nearby market to get food for breakfast the next morning (the in-house all you can eat buffet was too expensive for our tastes) and a bottle or two of wine to tide us over.  Some on-line research brought us a recommendation for dinner, Au Brin De Thym, where we made a reservation for 7pm. 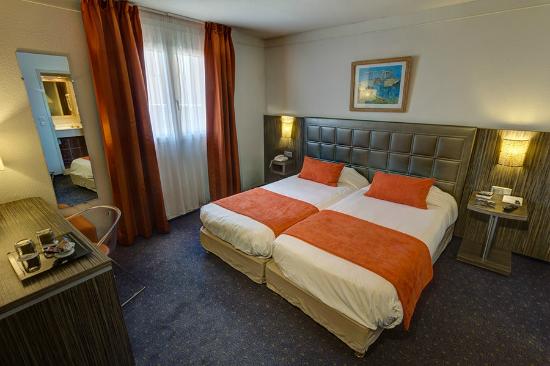 A Room Similar to Ours

Looking at our map, it seemed a simple and direct route to get there, but after a few twists, turns and diversions we found ourselves befuddled with the clock ticking down to our expected time of arrival.  In desperation I turned on my phone’s data (more on how we used our phones when I sum up the trip) and once I got connected, discovered via Google Maps that we were just a block away. 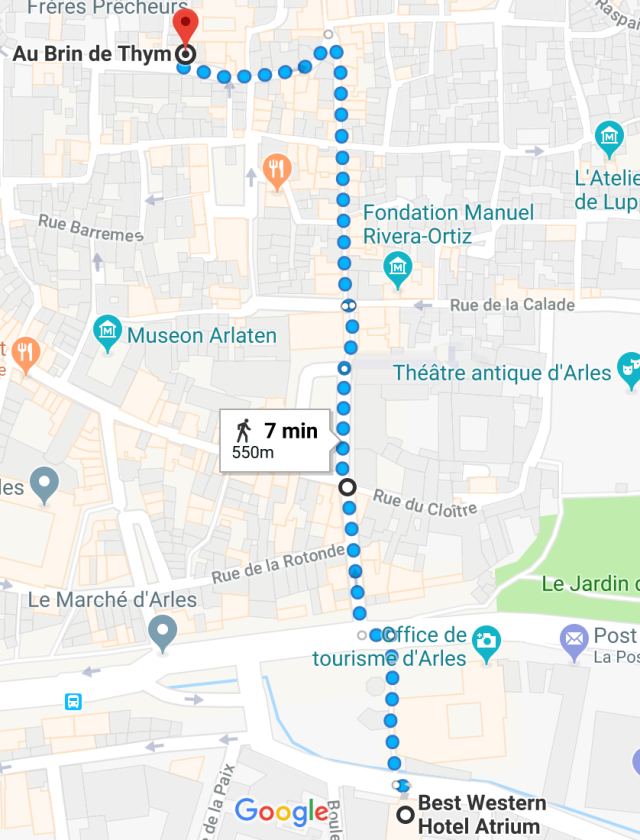 We arrived just in time and were seated inside at a table for two.  Here is the review I wrote for Trip Advisor:

We had dinner here our first night in town and even with some confusion regarding our order (we were confused and didn’t quite get it right) our food was simple and delicious, the outstanding object being the Lemon Curd dessert mentioned in other reviews. Staff is friendly and helpful. We hadn’t thought about returning but passed by the next day at lunch time and couldn’t resist another visit, splitting the veal plat due jour and a soup and of course, one more lemon curd dessert. Eat here and you won’t be disappointed. 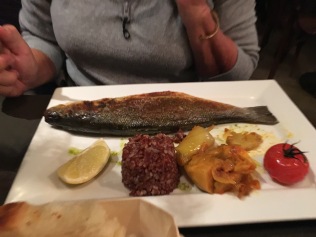 Joanna had Sea Bream the first day and I a plate of the day.  We fell in love with the lemon curd dessert and as mentioned happened to be walking by the place the next day at lunch time and couldn’t resist stopping in again.  This time we split a delicious chunky Veal Ragu over noodles and of course, one more of the lemon curds.

Lemon Curd with Crushed Speculous Cookies Throughout Topped with Merengue

The next day would be a full one as Arles is full of Roman history, as described in the official description for it as a World Heritage Site:

Arles is a good example of the adaptation of an ancient city to medieval European civilization. It has some impressive Roman monuments, of which the earliest – the arena, the Roman theatre and the cryptoporticus (subterranean galleries) – date back to the 1st century B.C.  During the 4th century Arles experienced a second golden age, as attested by the baths of Constantine and the necropolis of Alyscamps.  In the 11th and 12th centuries, Arles once again became one of the most attractive cities in the Mediterranean.  Within the city walls, Saint-Trophime, with its cloister, is one of Provence’s major Romanesque monuments.

Our first stop after breakfast was Musee Arles, an archeological museum housed in a modern building designed and built in 1995 by the architect Henri Ciriani.  It contains a large collection of antiquities, including monumental Roman sculptures from the local region.

Among the exhibits is a model of the multiple overshot water mills which existed at Barbegal and have been referred to as “the greatest known concentration of mechanical power in the ancient world”.

Also, of great interest is the Arles Rhône 3, an ancient Roman boat discovered in 2011, and on display since 2013. 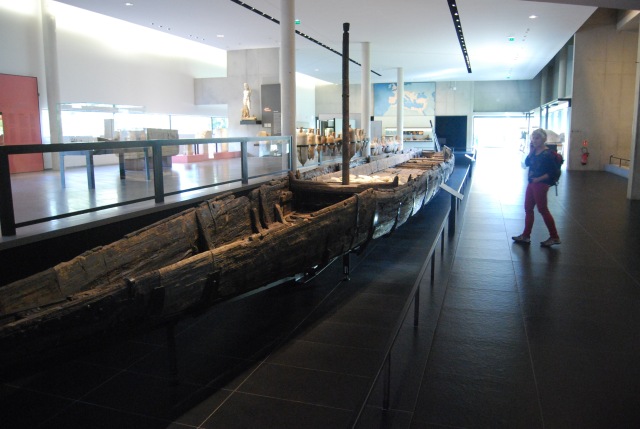 Finished with the museum, we stopped for lunch at Au Brin de Thym,as mentioned earlier, then walked to The Thermae of Constantine, a well preserved set of ancient Roman public baths named a UNESCO World Heritage site in 1981.  Dating back to the fourth century AD, they would once have formed part of an imperial palace known as Palais Constantine.  It is also thought that this was one of three sets of public baths in Roman Arles. 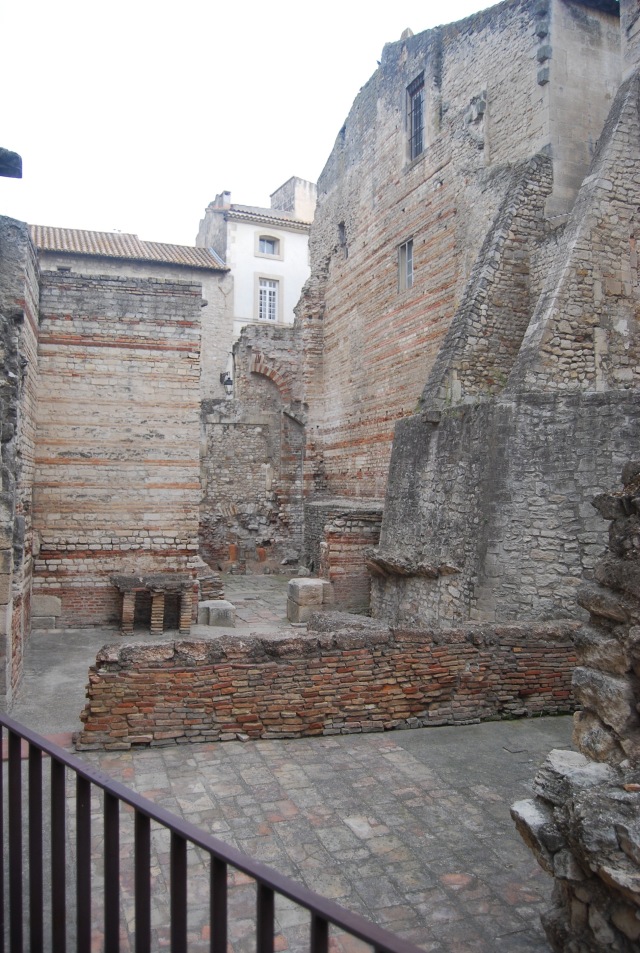 The Thermae of Constantine

The well-preserved remains, the excavated part being only its northern area, are only a fraction of that are visible, but give an idea of how Roman baths were typically constructed, taking one back to a time when you would dip yourself into the waters.

Interior of the Baths

Next, we made our way to the center of town to the Arles Amphitheater.  Built in 90 AD, the amphitheater was capable of seating over 20,000 spectators and as with the Amphitheater in Nimes, with the fall of the Empire in the 5th century, it was transformed into a fortress.  With four towers (the southern tower is not restored) the structure encircled more than 200 houses, becoming a real town, with its public square built in the center of the arena and two chapels.

This residential role continued until the late 18th century, when in 1825 the change to a national historical monument began.  By 1830 the interior buildings had been removed and the first event was organized in the arena – a race of the bulls to celebrate the taking of Algiers.  Today, it draws large crowds for bullfighting as well as plays and concerts in summer. 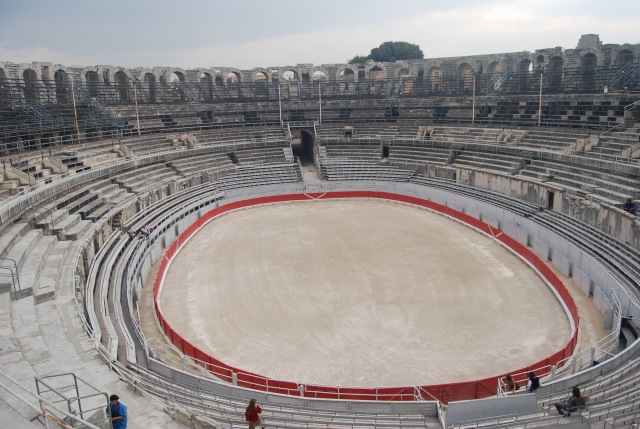 From there we walked a short distance to The Roman Theater of Arles, built at the end of the 1st century BC under the reign of Emperor Augustus, just after the founding of the Roman colony.  Started around 40/30 BC, it was completed around the year 12 BC, becoming one of the first stone theaters in the Roman world.

Done with the theater, we had one more stop to accomplish along a walking tour of scenes from the paintings of Vincent Van Gogh.  During his stay in Arles between February 1888 and May 1889, he executed about 300 paintings and drawings.  The places in the city where the artist set up his easel are marked with panels representing his paintings. 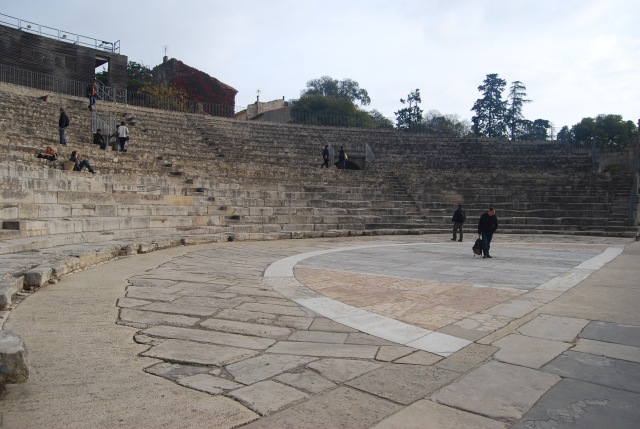 About ten spots have been marked : the Place du Forum for the Café in the Evening, the Trinquetaille bridge where he painted the Staircase of the Trinquetaille Bridge, the Rhone River embankment for his Starry Night over the Rhone, the Place Lamartine where his Yellow House was located, in the Rue Mireille at the Old Mill, the public park on the Boulevard des Lices for his Public Garden, the Espace Van Gogh and his Hospital Garden, the road going along the Arles-to-Bouc Canal at the Langlois Bridge with Washerwomen, more commonly called the “Van Gogh Bridge”.  The Roman arena and the Alyscamps cemetery were also immortalized in several paintings.

As we were running out of energy, we only stopped at the Hospital Gardens on the way back to the hotel, enjoying its tranquil setting before settling in for the day, a long one of much walking and historical input.  Having eaten well both days we felt no need to go out again for dinner, instead buying some snacks (and wine of course) at the local market to munch on in our room as we prepared for another full day with a planned excursion to Avignon, at the end of which we would pick up a rental car to take us out into the country side.  We’d reunite with Jenny Manetta that day, but that is a story for another session. 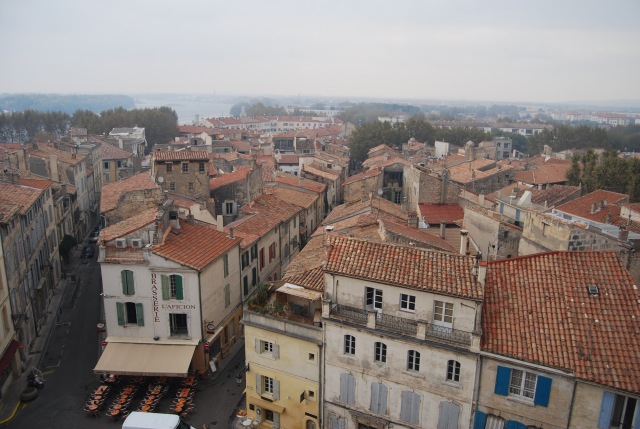 Crowded Streets around the Amphitheater

The Thermae of Constantine: http://www.arles-guide.com/arles_tourism/arles_monuments/the_thermae_of_constantine_in_arles