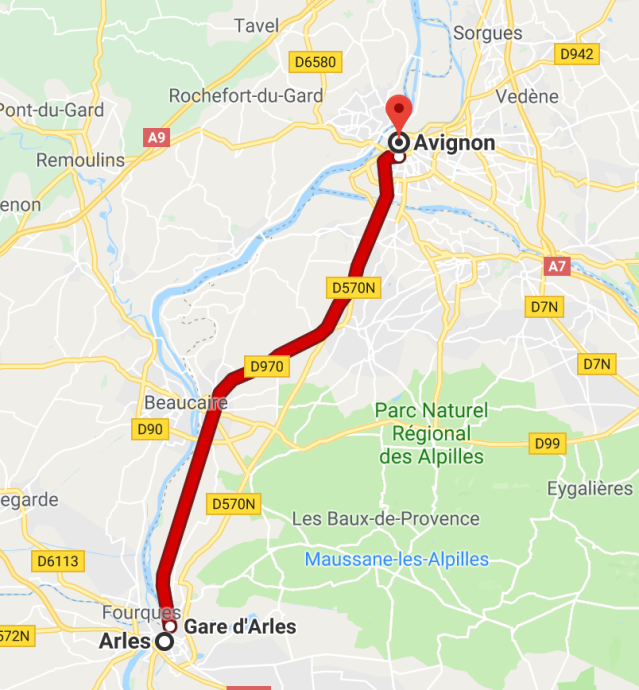 We arose early the next day and were out the door before the sun was up, although this late in the season it didn’t usually rise until well after 7am.

On the way to the train station for our short trip up to Avignon we passed by stalls being set up for the weekly open market held on the street next to the hotel.

There is something about the early morning, muted sounds against a still sleeping world, the lights from the stalls reflecting off puddles of water and long shadows playing against stone walls, that is otherworldly. 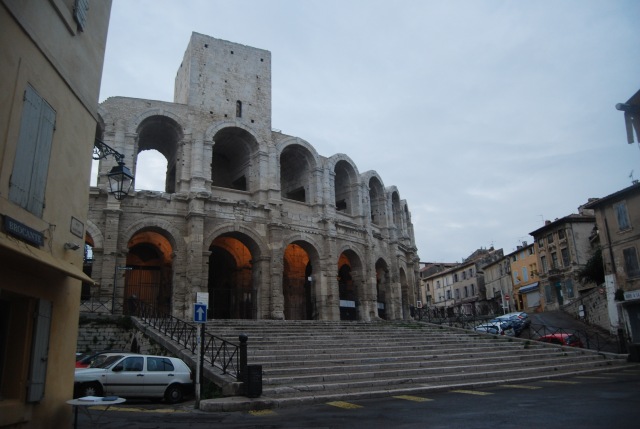 As we left the center of town and walked past the roundabout on the way to the station we paused to take in another one of the Van Gogh painting sites, this time La Maison Jaune.  On May 1, 1888, Van Gogh rented four rooms here, occupying two large ones on the ground floor to serve as an atelier (workshop) and kitchen, and on the first floor, two smaller ones facing Place Lamartine.  The building was severely damaged in a bombing raid by the Allies on June 25, 1944, and was later demolished

He indicated that the restaurant, where he used to have his meals, was in the building painted pink close to the left edge of the painting (28 Place Lamartine), run by Widow Venissac, who was also Van Gogh’s landlady, and who owned several of the other buildings depicted.

At the station we used a ticket machine to purchase our tickets and I made the unwise decision to purchase two senior round-trip fares, an act that would come back to haunt us later that day (we sensed but did not feel the subtle presence of Jenny Manetta).  We disembarked at Avignon’s busy central station, replete with multiple food options (crepe stand and the bakery chain we’d patronized in Toulouse) and began walking into the heart of town, prepared to follow a walking tour of St. Steves. 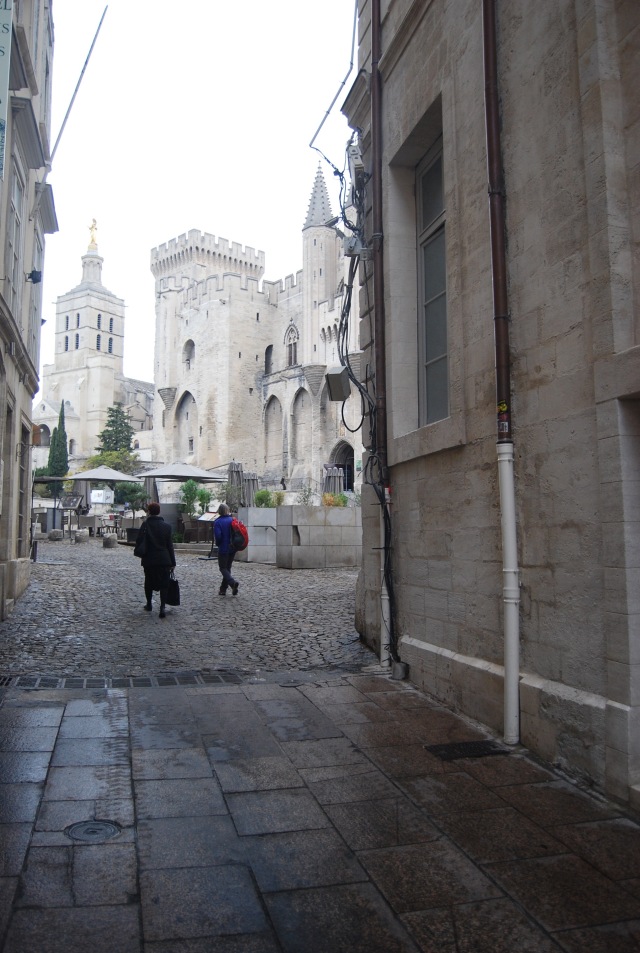 Our first stop was Place de l’Horlog, in ancient Roman times the forum, and in medieval times the market square.  It is named for the clock tower (now hiding behind the more recently built City Hall) which, in its day, was a humanist statement.  In medieval France, the only bells in town rang from the church tower to indicate not the hours but the calls to prayer.  With the dawn of the modern age, a secular clock towers like this rang out the hours as people organized their lives.

Palace Square and Palace of the Popes

We walked slightly uphill to Palace Square (Place du Palais).  This grand square is lined with the Palace of the Popes, the Petit Palais, and the cathedral.  In the 1300s the entire headquarters of the Roman Catholic Church was moved here after the Church bought Avignon and gave it a complete makeover. 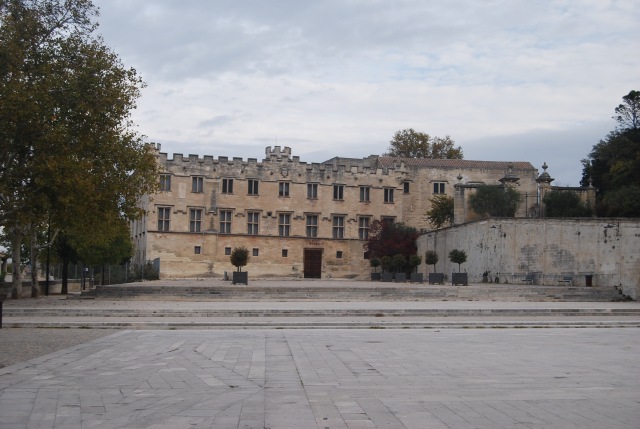 Along with clearing out vast spaces like this square and building a three-acre palace, the Church erected more than three miles of protective wall (with 39 towers), “appropriate” housing for cardinals (read: mansions), and residences for its entire bureaucracy.  The city was Europe’s largest construction zone. Avignon’s population grew from 6,000 to 25,000 in short order (Today, 13,000 people live within the walls.) 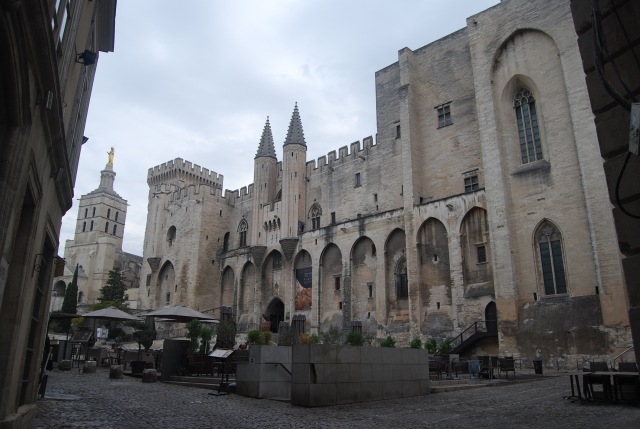 Palace of the Popes and the Cathedral

We would return to take a tour of the Palace of the Popes later in the day but for now pushed on to grab a snack, then walk down to the Rhone to check out the St. Bénezet Bridge (Pont St. Bénezet).

View of the Rhone

This bridge, whose construction and location were inspired by a shepherd’s religious vision, is the “Pont d’Avignon” of nursery-rhyme fame.  Built between 1171 and 1185, it was strategic, one of only three bridges crossing the Rhône in the Middle Ages, important to pilgrims, merchants, and armies. 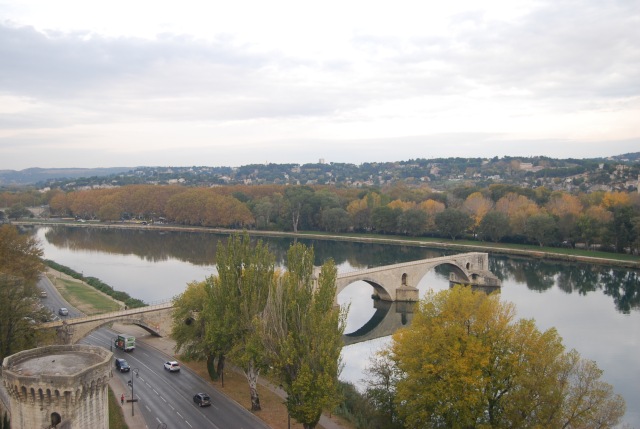 View of the Bridge

It was damaged several times by floods and subsequently rebuilt.  In 1668 most of it was knocked out for the last time by a disastrous icy flood.  The townsfolk decided not to rebuild, and for more than a century Avignon had no bridge across the Rhône.  While only four arches survive today, the original was huge, a 22-arch, 3,000-foot-long bridge extending from Vatican territory across the island to the lonely Tower of Philip the Fair, which marked the beginning of France.

Two J’s on the Bridge

It’s a pretty impressive structure regardless and we spent a bit of time walking out to the end, visiting the small Romanesque chapel perched on one side that is dedicated to St. Bénezet and finally exiting to head over to the Palace of the Popes (Palais des Papes).  We’d purchased a combined ticket for the bridge and the palace for 26 euros for the two of us, a pretty good deal for sites of this scope and complexity.

View Back to Town

In 1309 a French pope was elected (Pope Clément V) and he decided that dangerous Italy was no place for a pope, so he moved the whole operation to Avignon for a secure rule under a supportive French king.  The Catholic Church literally bought Avignon (then a small town), and popes resided here until 1403.  Meanwhile, Italians demanded a Roman pope, so from 1378 on, there were twin popes— one in Rome and one in Avignon— causing a schism in the Catholic Church that wasn’t fully resolved until 1417. 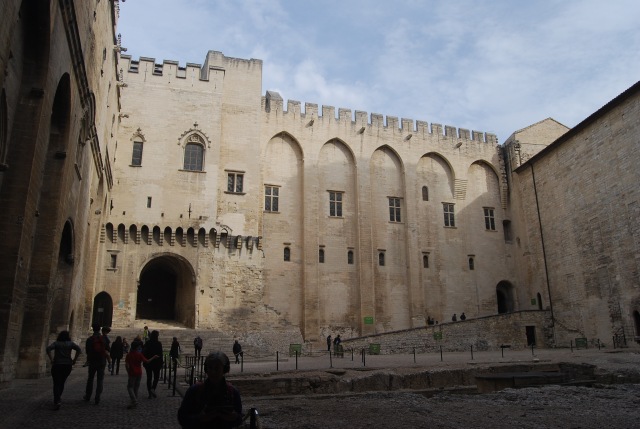 Courtyard Palace of the Popes

The palace was built stark and strong; it was the most fortified of the time, with 10-foot-thick walls, it was a symbol of power.  There are huge ceremonial rooms (rarely used) and more intimate living quarters.  There’s one big “chapel” (twice the size of the adjacent cathedral) which, while simple, is majestic in its pure French Gothic lines.  Seven popes ruled from here, making this the center of Christianity for nearly 100 years.  The last pope checked out in 1403, but the Church owned Avignon until the French Revolution in 1791. 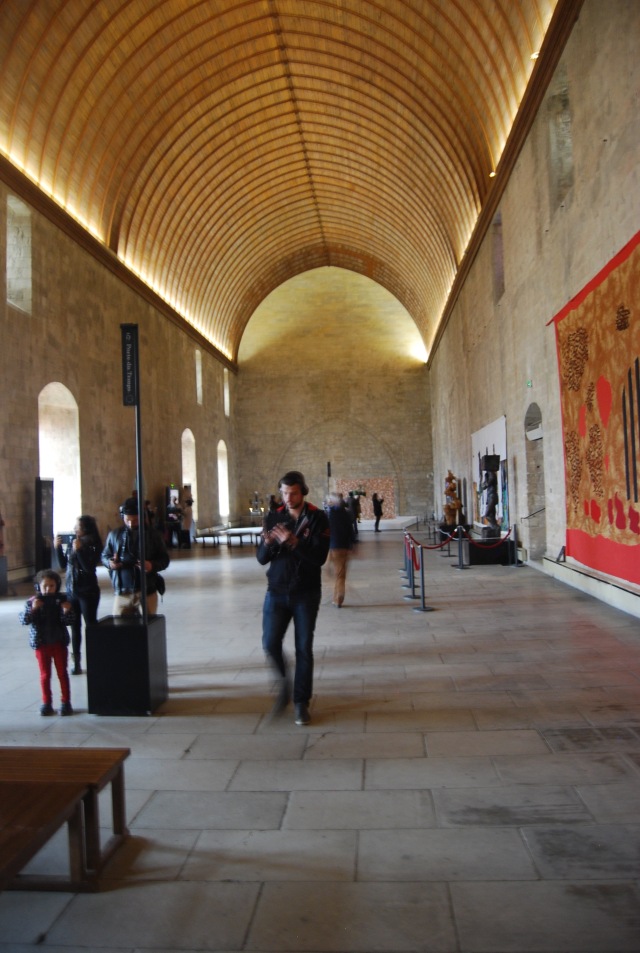 During this interim period, the palace still housed Church authorities.  Avignon residents, many of whom had come from Rome, spoke Italian for a century after the pope left, making the town a cultural oddity within France.  The palace is pretty empty today, nothing portable survived both the pope’s return to Rome and the French Revolution.  In fact, Revolutionary leaders (who called the building “the Bastille of the South”) decreed that it be demolished but lacked the money to carry out the destruction.

The tour was impressive for its use of technology.  Each of us was assigned an iPad which narrated the stops along the way.  At every major room you’d approach a central stand and aim the device at it; when properly aligned your unit would produce more narrative, specific to the function of the room, its furnishing, and the activities it would have housed.

At the end, I ascended to the top level of the complex (Joanna stayed behind) to catch a view of its ramparts and the city below.  There is a small café located up there (I went in but didn’t purchase anything) and back outside this late in the season, the brisk wind blew cold through my outer garments.

I descended to the first floor and met Joanna.  We’d had a full morning and were hungry, but ready to also tackle the second part of our day, the St. Steves walking tour of Avignon’s back streets.  We’ll cover that in the next post.

Palais Plaza from Atop the Palace of the Popes

Palace of the Popes: http://www.avignon-et-provence.com/en/monuments/popes-palace-avignon