Sleeping that first night we discovered a couple of downsides to our Chic Airbnb, one correctible and one not so much.  The non-changeable was that in many homes on the west coast don’t have air conditioning (ours in L.A. doesn’t) and we were visiting during a very warm period of the year, so temperatures in the bedroom were a bit uncomfortable. 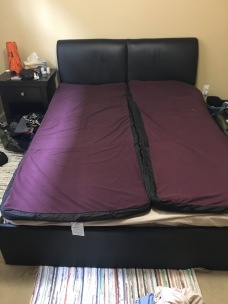 The second condition was that this was quite possibly the hardest mattress we’ve ever slept on.  When we arose in the morning we even checked to see if it wasn’t just a box spring and no mattress, but no, it was a mattress that felt just like sleeping on a hardwood floor.  Our solution?  We went out to the car and brought in our Thermarest Sleeping Pads, hooked them together without inflating them and placed them on the bed.  Problem solved. 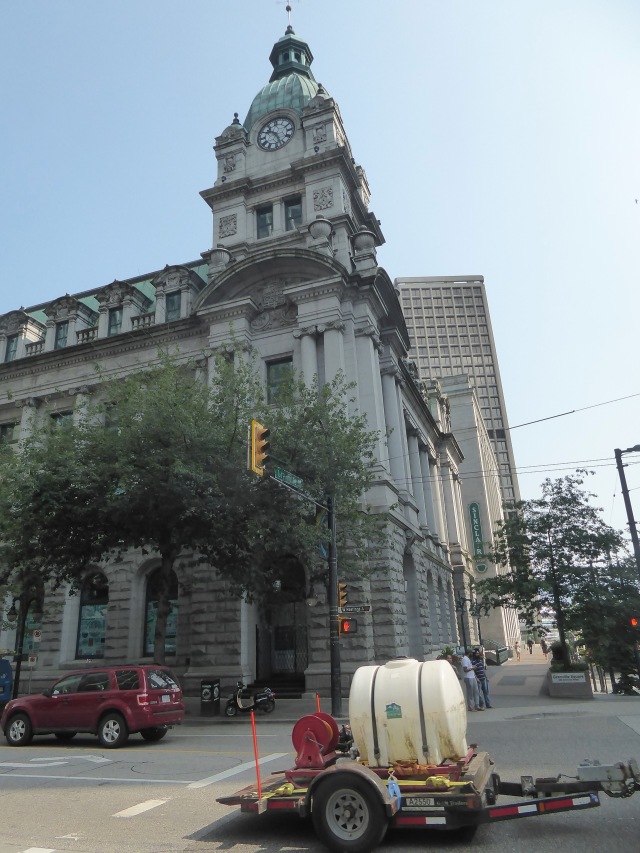 Start of The Tour

Our initial activity for the day would be a free guided walking tour with Tour Guys of Vancouver.  We were to meet in front of the Art Gallery and we left with what we thought was plenty of time, only to discover that locating reasonably-priced parking nearby would be a challenge.  We eventually succeeded and made it to the starting point just as the tour started.  Here is my review in Trip Advisor:

An Excellent Way to Start Your Visit to Vancouver

We often take guided walking tours of cities we visit and found this one to be an excellent choice. Marla was our guide and did a very good job of keeping a large group together and projecting so that we could all hear her. And what a great singing voice. We’re thinking of doing a different tour with this company tomorrow.

It was definitely a comprehensive tour full of the history of Vancouver and covering quite a bit of territory, lasting pretty close to the stated two-hour length, ending in the neighborhood known as Gastown.  This is the original settlement that became the core of the creation of Vancouver whose historical boundaries were the waterfront (now Water Street and the CPR tracks), Columbia Street, Hastings Street, and Cambie Street, which were the borders of the 1870 townsite survey. 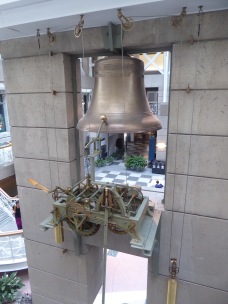 Historical Bell Hung in a Mall

Whimsical Statue in the Mall

Named for “Gassy” Jack Deighton, a Yorkshire seaman, steamboat captain and barkeep who arrived in 1867 to open the area’s first saloon in what would become the center of the city’s drinking life; there would eventually be 300 licensed establishments in a twelve-block area.  After the Depression Gastown fell into decline and disrepair as a continuation of the Skid Row area with cheap beer parlors, flophouse hotels, and loggers’ hiring halls.

In the 1960s, citizens became concerned with preserving Gastown’s distinctive and historic architecture, and a campaign led by businesspeople and property owners, as well as the counterculture and associated political protestors gained traction to save Gastown, eventually leading to it being declared a a National Historic Site of Canada in 2009.

Our parking meter about to expire, we beat a hasty mile and a half retreat to the car, arriving in time to avoid a ticket.  Pretty hungry by now, we drove back towards what we thought was Gastown, parking on the street at inexpensive meters only to discover that we were nowhere near the area.

We came upon an open plaza full of lunchtime listeners of a free concert and noticed Triple O’s, a crowded burger joint and figuring that serendipity had placed us there, went inside and split a pricey but very good burger and fries. 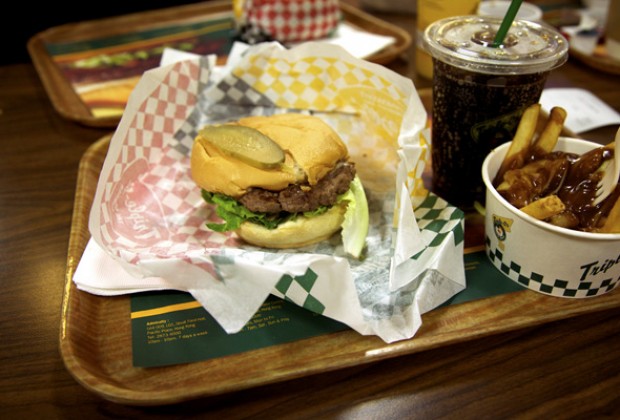 We returned to the car and on the way back to the house stopped in at a Trek bike store to inquire about bike rides we could take the next day and were rewarded with a foldable map showing all of the bike paths and lanes in the city.

We killed time at the house for the rest of the afternoon, reading, streaming some Netflix and enjoying an adult beverage or two.  One was a canned Gin Twist we found at the Liquor store, the other a drink I introduced to Jessica a few years back when we went to see Robert Plant and Band of Joy at the Ovens Auditorium, a Crown Royal and Ginger Ale (Crown and Ginger).

Sufficiently hydrated we headed out in the early evening back to Broadway for dinner at Akbar’s Own, a highly regarded Indian restaurant.  After being seated, Joanna ordered a martini of the day and I a Tiber Beer to go with a Mixed Platter (Samosa, vegetable pakora, and chicken pakora) to start with and then the Lamb Vindaloo (Boneless lamb & potatoes in curry sauce) as our main course.

Even splitting the food, it proved to be way to much; we probably could have just gotten by with the Mixed Platter but as good as everything tasted, we managed to eat all but a lunch sized serving of the lamb, some basmati rice and part of a piece of Naan.  We settled up, a total of 54.36 Canadian Including tip ($43 US), quite reasonable for a completely satisfying meal.

We looked forward to a better night’s rest that evening with our sleeping pad solution and long bike ride the next day.  Vancouver was proving to be just the tonic we needed after so many days of camping in nature.  And we’d do our best to fill the next two days up as well.

A Section of the Bike Map