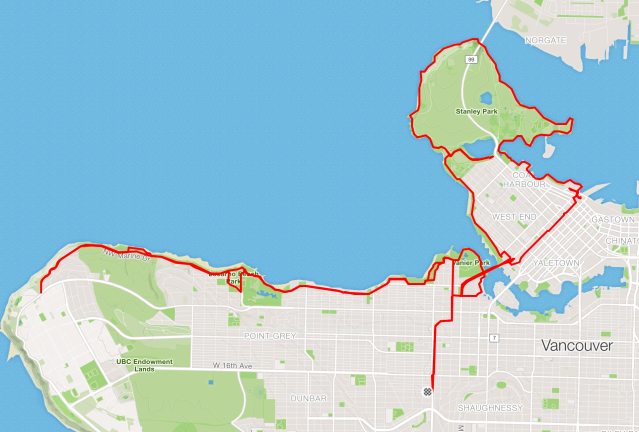 As planned, we set out the next morning on the bikes ready to explore as much of this bike friendly city as we could.  Heading north on the bike path two blocks away from the house to just shy of Burrard Bridge, then left along the shoreline all the way out to and past Spanish Banks Beach State Park, climbing up a hill to top out at the University of British Columbia campus.

Heading Up to UBC

We returned the way we came and made a left at Burrard Bridge crossing over False Creek (actually an extension of English Bay to head into downtown. 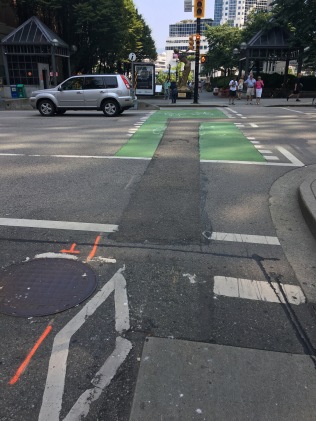 Riding on well-marked bike lanes we continued on Hornby Street to the Seaside Greenway at Coal Harbor, home to the cruise ship terminal. 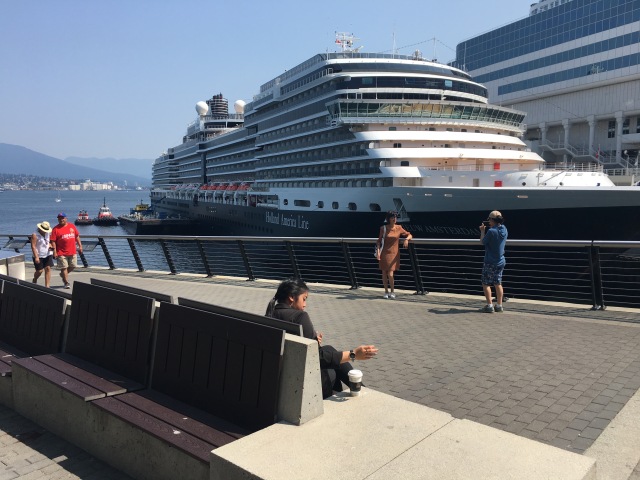 While there we stopped at a Starbucks for a big iced coffee and a snack, the continued on the greenway all the way around the point that comprises Stanley Park.

Looking Back at the City on the way to the Bridge

A 1,001-acre public park, it is almost entirely surrounded by the waters of Vancouver Harbor and English Bay.  Originally used by Indigenous peoples before British Columbia was colonized by the British during the 1858 Fraser Canyon Gold Rush., it was later turned into Vancouver’s first park when the city incorporated in 1886 and is named after Lord Stanley, 16th Earl of Derby, a British politician who had recently been appointed Governor General. 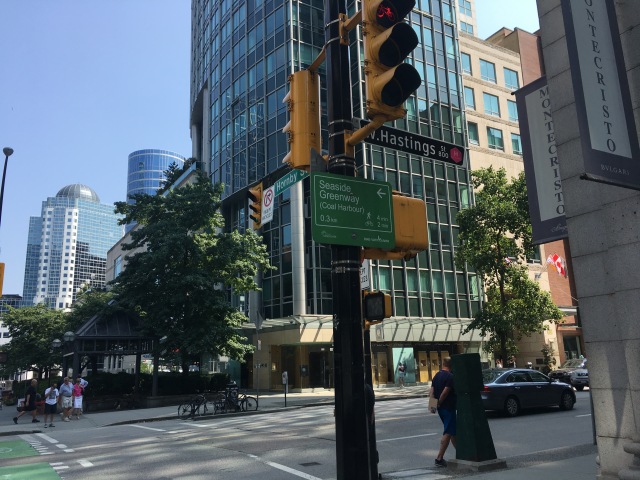 Stanley Park is not the creation of a landscape architect, but the evolution of a forest and urban space over many years.  Much of the park remains as densely forested as it was in the late 1800s, with about a half million trees, some of which stand as tall as 250 Feet and are up to hundreds of years old.  Thousands of trees were lost (and many replanted) after three major windstorms that took place in the past 100 years, the last in 2006.

Circling the park is the near-century-old Vancouver Seawall, which can draw thousands of residents and visitors to the park every day, as we would discover as we made our way around its close to six-mile length.  It was a stunning Saturday afternoon bringing both tourists and locals out, making navigating on the path a challenge.  Fortunately, you can only ride in one direction but the combination of newbie cyclists, interaction with pedestrians, and narrow sections required a very slow and restrained pace on our part.

Completing our circle of Stanley Park, we re-crossed Burrard Bridge and made our way back to the house, exhilarated after a ride that combined some serious cycling with low speed cruising and its attendant people watching.  Sometimes it just doesn’t get any better.  While Joanna went nearby for a yoga class, I sat around the apartment enjoying being indoors, an act often taken for granted when you spend little time outdoors. 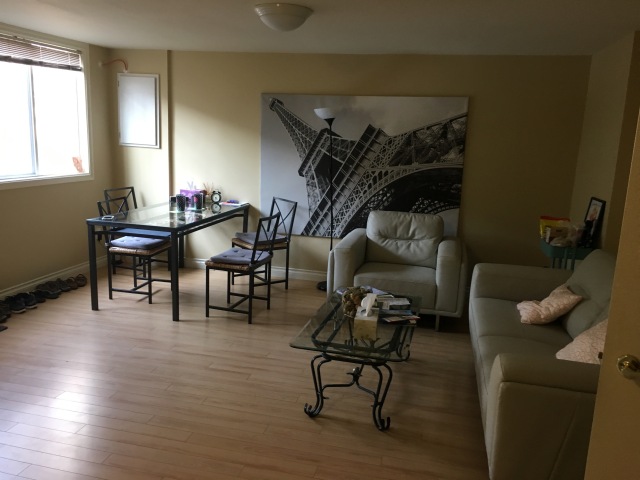 Joanna returned and thinking about dinner, our criteria was inexpensive and leaning towards Asian or Middle Eastern.  A little research resulted in our heading to Broadway, but to the west this time to Donair Dude, a Turkish inspired kebab house with all the things Mediterranean and Middle Eastern we often crave.

Joanna ordered a lamb pita and I the falafel plate, (garbanzo bean fritters, Basmati Rice, a bunch of salad and pita) Protein, carbs, some greens all from a meatless alternative that tastes delightful.  I should eat it more often. 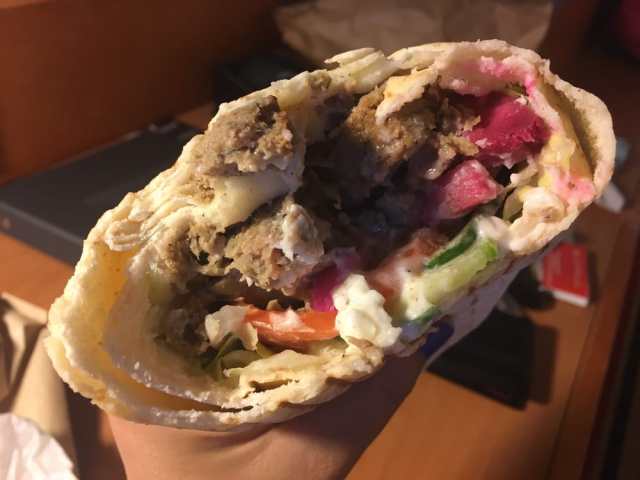 With a beer and a tea our total came to 20.45 CD ($15.68 USD) and as with most of the kebab/shawarma franchises out there, this one completely delivered on taste, quality and quantity.  And given the serving sizes we had a bit to take with us, leftovers we’d put to good use later in our stay.

Having gotten our bike ride in and being happy with our previous walking tour, we opted to again use Tour Guys of Vancouver to take their Chinatown walk.  We met again at the Art Gallery, parking made easier this time around as it was Sunday and the downtown was deserted in the early morning.  Our tour guide, whose name escapes me, would work us hard, the tour eventually lasting 2-1/2 hours on a warm day that tested our endurance.

I’ll summarize our walk as these extended tours include so much that it would fill two posts just to capture all we viewed.  We started out down Georgia Street, stopping outside the Main Library branch, then past the soccer stadium to eventually arrive in Chinatown.  From here on we got a schooling on the history of Chinese immigration to Canada and the racism, exploitation, and hardships experienced by these early immigrants to the city.

In the heart of Chinatown, we were interrupted by a young local who badgered our tour and our guide with an endless rant about why we were celebrating the Chinese in Vancouver and why weren’t Canadians celebrated in other countries.  We couldn’t get him to recognize how rude he was being, as any remarks on our part seemed to incite him even more until he eventually tired of the game and left us alone.

Chinese Associations (like guilds) formed the heart of Chinatown and many of the structures here are named for them.  We stopped to admire the Sam Kee Building, now occupied by Jack Chow Insurance and listed in the Guinness Book of Records as the shallowest commercial building in the world with a ground floor depth (from storefront to rear of building) of just 4’11”.

After a stop at a local herbal medicine shop, we ended the tour at Dr. Sun Yat-Sen Park, a peaceful oasis in the center of the city  Built with funding from the Chinese and Canadian governments, the local Chinese community, and other public and private sector sources, it opened in 1986 in time for Expo 86.

Because the winter climate in Vancouver is similar to that of Suzhou, many of the same plant varieties are found in the garden as in its Suzhou counterparts. The plants were chosen according to their blossom schedules in order to emphasize seasonal changes, especially the “awakening” in spring. 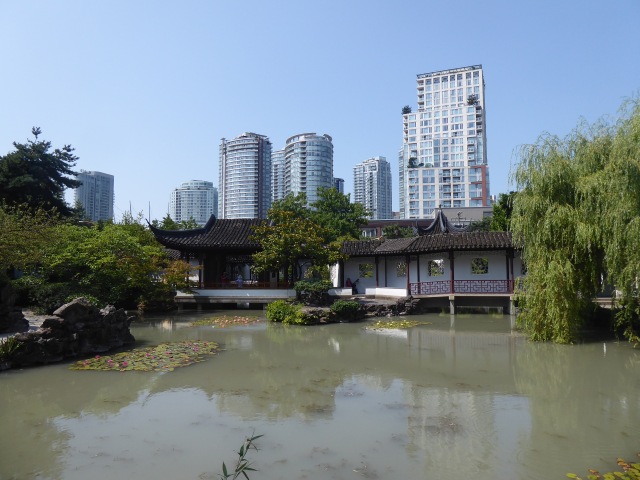 View from the Garden

Finished with the tour and hungry, we walked a few blocks towards Gastown to stop in at Tacofino, where we sat at the counter and got a beer apiece and two orders of tacos, Pork Al Pastor (spit roasted pork, pineapple, pickled onion, and cilantro) for Joanna and Fish (pacific cod, salsa Fresca, and chipotle mayo) for me.

The Bar at Tacofino

The tacos were delicious, and not just because we were hungry.  Succulent pork, moist mild cod, both with just the right amount of additional ingredients to compliment the proteins. 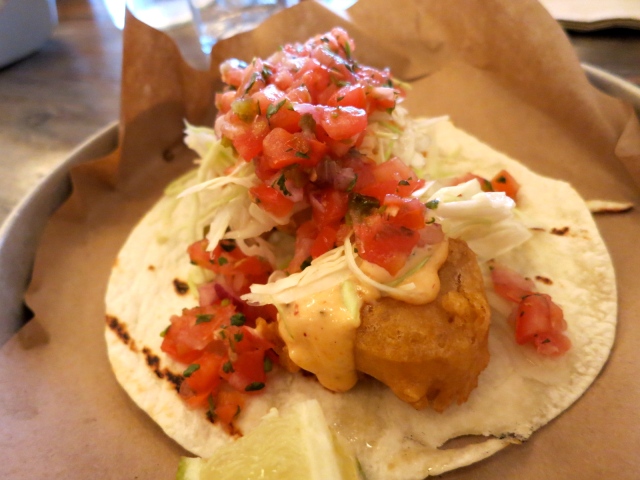 We returned to the apartment and spent a quiet evening there, eating our accumulated left-overs and preparing for the last couple of weeks of the trip, which would involve two nights on the road to Yellowstone, camping there and in the Grand Tetons for seven nights and then turning towards home.  Our time in Vancouver had been rewarding, two great walking tours, a nice bike ride and savoring the food of a town with many international choices.  I’m not sure we’ll return any time soon, but if we do we’ll sure know where to eat.

Building in a Building