Recalling the delays we’d encountered on the way into Vancouver at the tunnel and at customs, and with an eight hour drive in front of us, we left the apartment around 7am.  Although it was a Monday, traffic was light as we were going against the morning commute and we made it through the tunnel with minimum delay.

Nearing the border, we stopped at the large Duty-Free facility to pick up a bottle of Jack Daniels Honey Whiskey (perfect for sipping around the campfire) and then pulled into line for a not too burdensome 20-minute wait to clear customs.  The drive went smoothly, and we looked forward to meeting up with our good friend Colleen, who we’d last seen with her husband Brian in Portland in 2016. 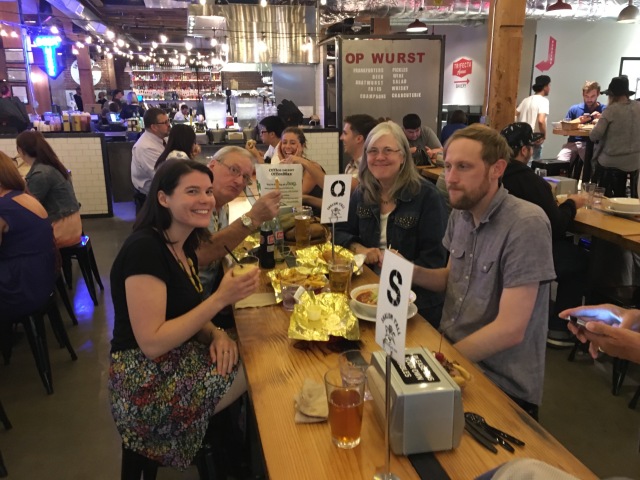 Shannon, Brian, Colleen and Lee in Portland in 2016

He and she had just spent a few days in Spokane working on some family affairs and he had left the day before to return to Portland while she stayed behind a few more days to finish up.  We arrived at our lodging for the night, the Best Western City Center, parking in the lot, where we noticed a couple of suspicious looking guys hanging out.

We didn’t think much about it but did check into parking in the locked garage later for a nominal charge.  After hitting the room for a while, we left to walk around the block to the Saranac Public House, a pub suggested by Colleen.  We arrived a bit before she did, and I ordered a Lagunitas Pilsner at Happy Hour prices (Joanna was holding off until dinner); not long after Colleen arrived, and we were seated in the dining room.

We’d spend a very nice hour or so with her, getting caught up on each other’s lives since our last time together two years ago.  Along the way Joanna ordered the soup of the day, a different type of Tortilla Soup than we’d seen before and for me, the Pork Verde Stew (Seared pork shoulder, onion, garlic, cumin, pasilla, jalapeño & bell peppers with tomatillo & cilantro in chicken stock. Served over brown rice with seasoned pinto beans, sour cream & cilantro).

Mine was an interesting interpretation as well.  Instead of large chunks of pork in a light broth, this version featured shredded meat in a dark and smoky sauce.  Not too spicy, it went down easy, particularly as I washed it down with a Stone IPA on draft.  At the end of the meal, we ordered dessert, the Blackberry Peach Crisp (Blackberries and peaches baked with a crisp top layer of oats, brown sugar and butter and served with a scoop of vanilla bean ice cream).

We said farewell to Colleen and returned to the hotel, deciding for safety sake to park the car in the interior garage.  The next morning, with a short drive to Missoula in front of us, we decided to walk over to the REI a couple of miles away to pick up some fuel for the stove.  We wound our way through Riverfront Park but about halfway, my back started to bother me, so we returned to the Best Western, checked out, and drove over to the store.

Unlike Here, All of the Black Straps were Undone

On the way out of town we stopped at a Safeway to pick up provisions and noticed a group of folks trying to get into a car that had the keys locked in it.  It didn’t seem to suspicious, so we shopped and then returned to the back of the Highlander to put the dairy products in the cooler.  At this time, I noticed that all of the straps holding the bikes on the rack were unlocked and upon further examination saw that someone had tried to cut through the cable that secures them to the car.

Cut in the Security Cable

A bit shaken but thankful that the bikes were still on the car, we secured them with the straps and drove off wondering just when the attempt to steal them took place.  Was it there in the parking lot at the Safeway, or the day before when we’d eyed those two shady characters at the Best Western, where we’d back the car up against the building sheltering them from view?  We’ll never really know but from that point on would take greater precautions when it came to safe guarding the bikes.

We arrived in Missoula early in the afternoon and before checking into our lodging for the night, the Super 8 Missoula/Reserve St, we drove into downtown to stop in at the headquarters for Adventure Cycling.  We cycled their Blue Ridge Bliss Tour in 2016 which you can read about in these three posts:

and will be doing their Ragin Cajun Country tour in October.

The organization’s mission is to “inspire and empower people to travel by bicycle”; one that we heartily support.  One of the staff members gave us a tour around the office complex, introducing us to other staff, pointing out the bikes they’ve collected that represent historic moments in the organization’s history and finally, letting us look at the picture board that features cross country cyclists who have stopped by the office, including our friend Charlie who rode from the East Coast to the West in three months this summer.  .

We drove back to the Super 8 and as we arrived so did our good friend Rendy, who would be joining us for the next week or so as we traveled down to Yellowstone and the Grand Tetons.  He’d come in a day early to spend time with his nephew Isaac and family and was just returning from that errand.  We sat around our room for an hour or so drinking beer, getting caught up, and then made our way up the street to The Stone of Accord for dinner.

The Stone of Accord is a pre-Christian legacy of the Celts. A free-standing rock with a small hole cut in the top, The Stone was used to finalize all types of contracts between the Celts.

Joanna started with a Great Lakes Brewing Rye of the Tiger IPA and I a Scottish Mule (Muddled cucumbers, lime and Hendrick’s Gin.). To eat, Joanna decided on the Prime Rib Cheese Steak with peppers, onions, mushrooms, provolone and beer cheese sauce on a hoagie roll while I ordered the Corned Beef Reuben.  Both were substantial in size with high quality ingredients, a pleasure to eat but hard to finish given the size of the portions.  Midway through the meal I ordered a locally brewed KettleHouse Cold Smoke Scotch Ale, an easy drinking accompaniment to the Reuben. 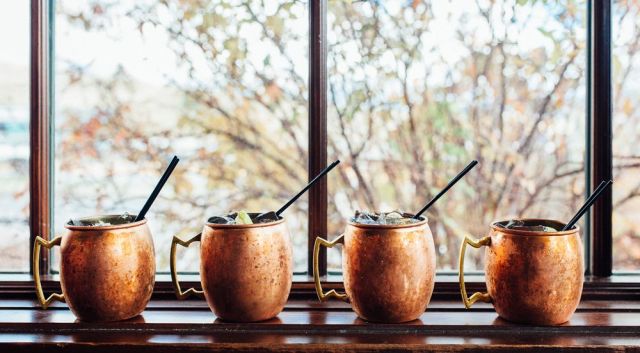 While quite good, the food tipped the price scales, with our total check coming to $62 including the tip, worth the money but not your typical inexpensive pub meal.  Back at the Super 8, we prepared for our drive to Yellowstone the next day, Rendy warning us off the complimentary breakfast which he had sampled that morning, a presentation that was representative of the price point of the lodging, not the fanciest digs we’d experienced on the trip, but not the worst (that was yet to come). 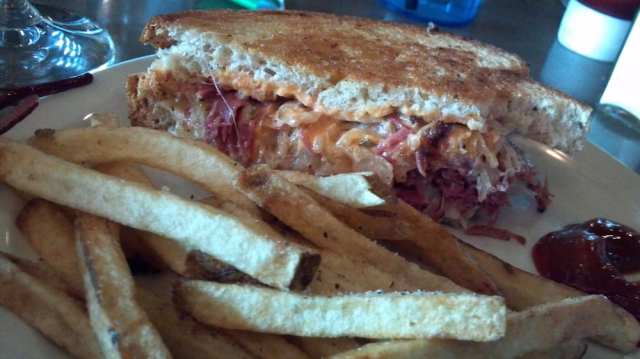 It was great to connect with Rendy and we all looked forward to our collective first visit to these two iconic National Parks.  We were all ready for seven nights of camping and exploring some of the most beautiful scenery in America.  Stay tuned to see how it all turned out.

The Stone of Accord: http://thestoneofaccord.com/