Joanna and I decided to give the Super 8 breakfast a chance and although not world class, there were some edible pastries, yoghurt, and cereal (my only shot at eating Fruit Loops) that made it worth the stop.  In these situations, its best to avoid whatever those things they call eggs and sausage are as we’ve heard they could be comprised of mutant monkey meat.

As we prepared to depart, packing the car became reminiscent of our six-month stay in Europe, when three separate folks joined us at different times, each with unique luggage needs, requiring a thoughtful re-working of an already crowded car.  In this case, Rendy had brought just one suitcase, which we would lovingly refer to as the ‘Big Mamba’ throughout the rest of the journey.  Indeed, it was so large that if the plastic wheels on the bottom of the case hadn’t disintegrated, making maneuvering it a joy, I quite possible could have towed it behind the car.

Something Akin to the Mamba

Seriously, it wasn’t that big but did require that we spend time trying to figure out the best configuration for the remainder of the time it would be in the car, one that would change a couple of times as we packed and unpacked it.  On the road, we spent the first part of the journey on the I-90, then off on the relatively open State Highway 287 all the way down to West Yellowstone where we would enter the park.

Midway through the drive we stopped off at an Arby’s, not one of our usual haunts but one that Rendy enjoys and found our sandwich selections, a Roast Turkey and Swiss for Joanna and a Chicken Salad for me surprisingly good, thick bread, good quality meat, and fresh lettuce and tomato to finish them off.

Yellowstone National Park is gigantic at 3,648 square miles (2,219,789 acres), 63 miles north to south and 54 miles west to east and larger than the states of Rhode Island or Delaware.  Established by the U.S. Congress and signed into law by President Ulysses S. Grant on March 1, 1872, it was the first national park in the U.S. and is also widely held to be the first national park in the world.

And we would experience every bit of that size as it would feel like we drove all of those miles and yet, barely scratched the surface of the park.  After entering the park, we drove south past the Old Faithful complex of buildings and activities, arriving at Grant Village 30 miles south later in the afternoon.  This complex and its campground sit on the edge of Yellowstone Lake, one of the largest high-elevation lakes in North America. 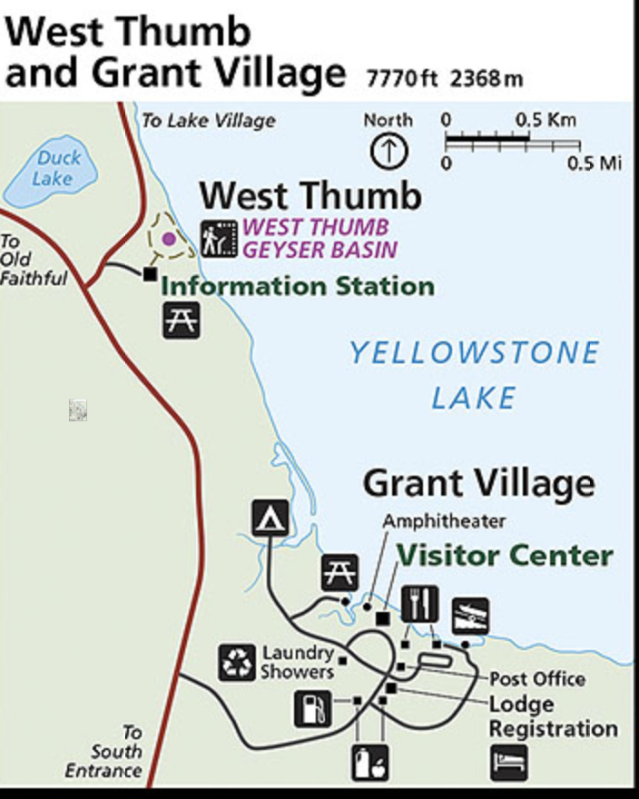 We checked in and drove to our campsite to set up.  At the site, there was plenty of space for our two tents and the ground was level.  This is bear country, so we’d need to store all food related items, even the stove, made more complicated as each site did not have its own bear locker, but shared one with two other sites. 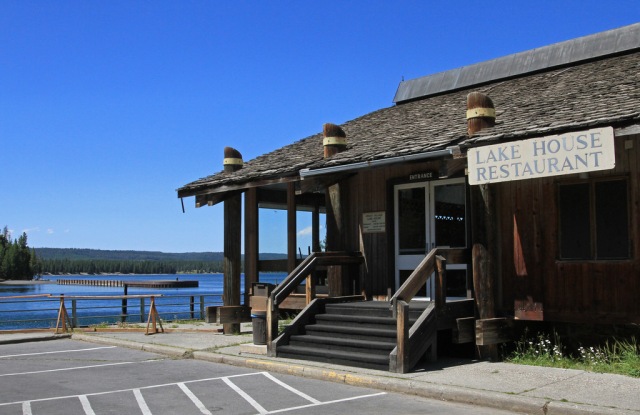 Not having had time to stop at a market, we drove over to the Grant Village Lakehouse Restaurant, one of the two in the village and the only one that didn’t require a reservation, to have dinner,. 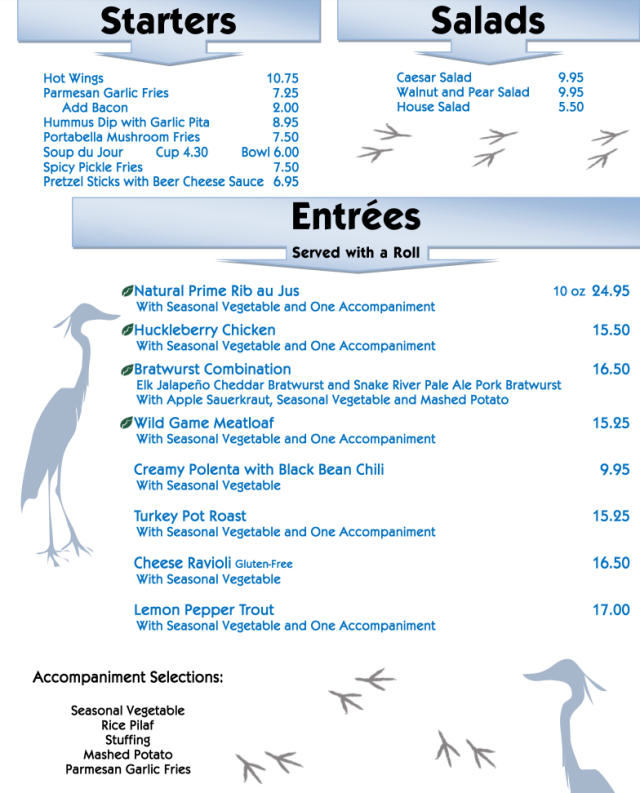 This is a casual place, one where you stand in line to place your order, are given a number, and the food is brought to your table.

Being a National Park, prices are somewhat elevated but the food in and of itself was good, essentially nicely done cafeteria chow.  Along with a beer apiece, Joanna enjoyed the Lemon Pepper Trout while I had the Huckleberry Chicken, a couple of breast tenderloins doused in something purporting to be Huckleberry sauce.  We’d run into Huckleberry products all over the park, succumbing to purchasing more than was good for us.  At the end of the day dinner ran us $47, reasonable enough for the setting.

The next morning, we made the 30-minute drive to the Old Faithful complex to meet longtime friends Irene and Ric, whom I’d met many years before at UCLA and who we’ve traveled with in the past (Mountain Home Group Site camping, Europe 2002, various bike outings, etc.).  They would be in the park for just one day, so our timing had worked out well.

Irene and Ric in Nuremberg with her Relatives in 2002

We arrived first, amazingly finding parking right in front of the Old Faithful Lodge (built in the 1920’s) and we cruised the gift shop and viewed the scores of people waiting for Old Faithful to erupt through the large picture window in a lounge.  As we would be repeatedly reminded throughout our stay, the park is centered over the Yellowstone Caldera, the largest super volcano on the continent.

Old Faithful from the Lodge

The caldera is considered an active volcano. It has erupted with tremendous force several times in the last two million years.  Half of the world’s geysers and hydrothermal features are in Yellowstone, fueled by this ongoing volcanism. Lava flows and rocks from volcanic eruptions cover most of the land area of Yellowstone. The park is the centerpiece of the Greater Yellowstone Ecosystem, the largest remaining nearly-intact ecosystem in the Earth’s northern temperate zone.

After a bit, Irene and Ric appeared, having walked over from the Inn at the far end of the complex.  We’d last seen Irene in June when in Los Angeles, but not Ric since our visit there in 2016. 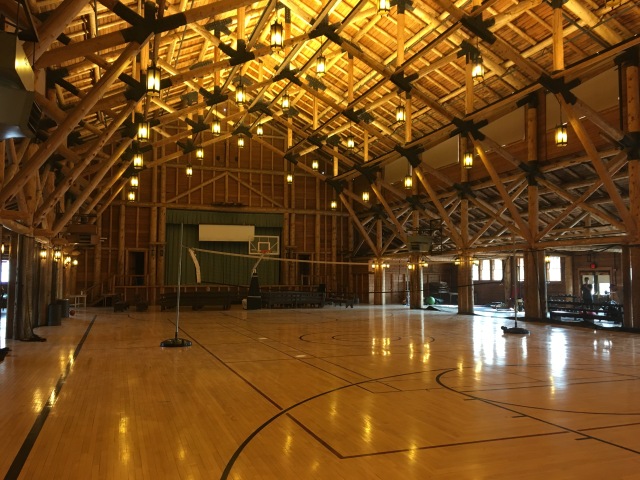 Gym at the Lodge

As we exchanged greetings and quickly got caught up, we planned out our day’s activities, which would primarily be hiking in the area.  Check it out in the next post. 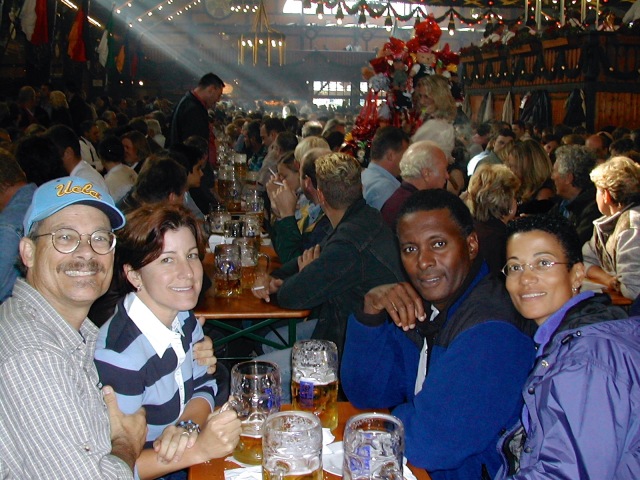