The first tomb I entered was that of Ramses III, the second Pharaoh of the Twentieth Dynasty who is thought to have reigned from 1186 to 1155 BC.  Considered to be the last great monarch of the New Kingdom to wield any substantial authority over Egypt, his long reign saw the decline of Egyptian political and economic power, linked to a series of invasions and internal economic problems that also plagued pharaohs before him. 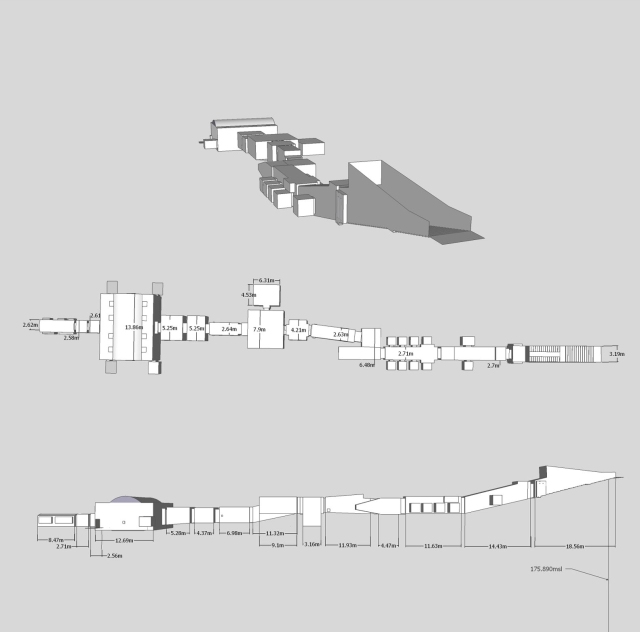 He has also been described as “warrior Pharaoh” due to his strong military strategies.  He led the way by defeating the invaders known as the Sea People, who had caused destruction in other civilizations and empires.  He was able to save Egypt from collapsing at the time when many other empires fell during the Late Bronze Age; however, the damage of the invasions later took a toll on Egypt. 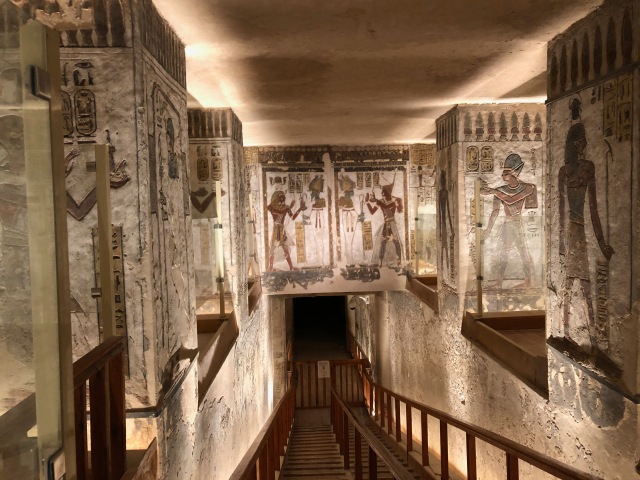 Entering the tomb, you descend a long ramp surrounded by walls and ceilings decorated with drawings and hieroglyphics that portray the Litany of Re (Funerary Text that is a two-part composition that in the first part invokes the sun, Ra, in 75 different forms.  The second part is a series of prayers in which the pharaoh assumes parts of nature and deities, but mostly of the sun god). Stories Told on Walls and Ceilings

This third corridor is decorated with the Book of Gates (it narrates the passage of a newly deceased soul into the next world, corresponding to the journey of the sun through the underworld during the hours of the night) and the Book of Amduat (It tells the story of Ra, the Egyptian sun god who travels through the underworld, from the time when the sun sets in the west and rises again in the east.  It is said that the dead Pharaoh is taking this same journey, ultimately to become one with Ra and live forever).

Two more corridors lead to the burial chamber, and an eight-pillared hall in which stood the red quartzite sarcophagus (which is now in the Louvre).  This chamber is decorated with Book of Gates, divine scenes and the Book of the Earth (The central figures in the story are Osiris, Ra and Ba, while the overarching plot is the journey the sun takes through the earth god, Aker). It primarily appears on the tombs of Merenptah, Twosret, Rameses III, Rameses VI, and Rameses VII and serves as a counterpart to the Book of Caverns. 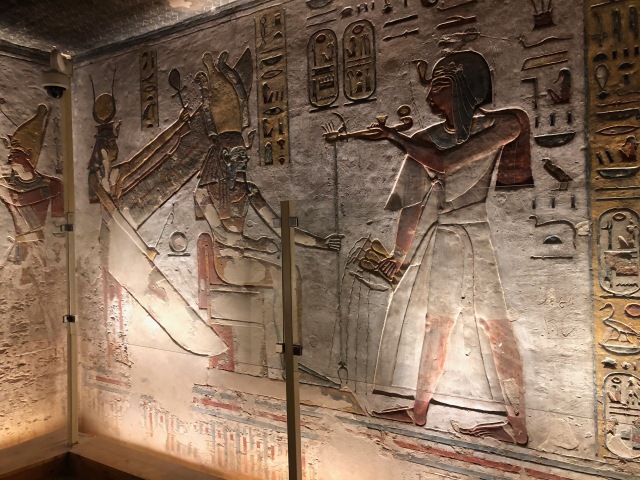 I left the tomb stunned by all it contained, its length and the level of detail portrayed on almost every surface.  This would be repeated again when I entered the tomb of Merenptah, who from 1213 BC – May 2, 1203 BC) and was the fourth pharaoh of the Nineteenth Dynasty. 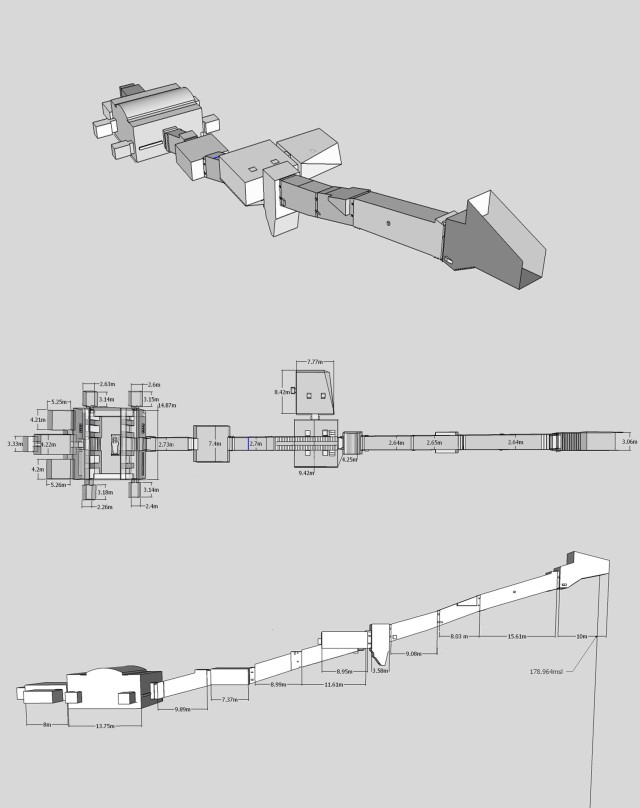 The thirteenth son of Rameses II, he only came to power because all his older brothers, including his full brother Khaemwase, had died.  By the time he ascended to the throne, he was probably around seventy years old. 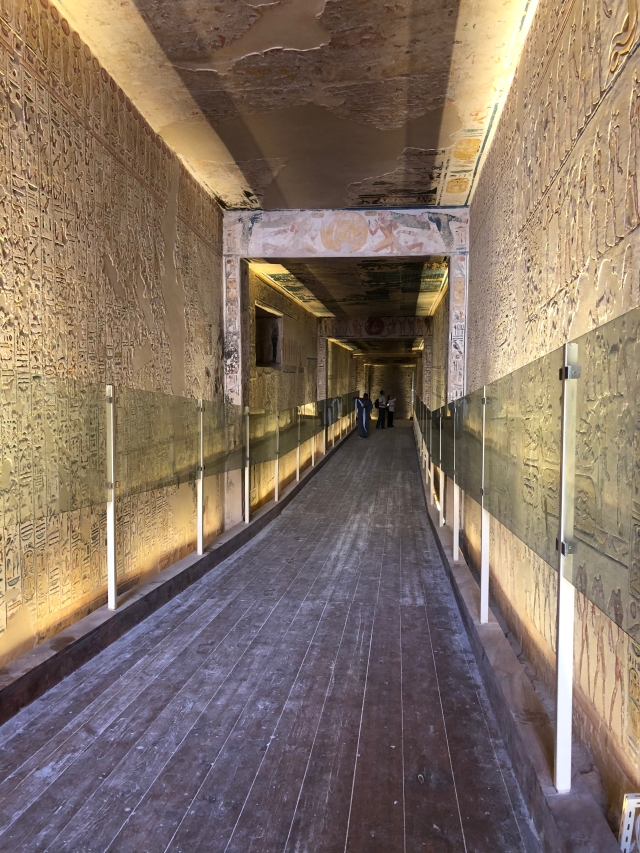 A Long Passageway in Merenptah’s Tomb

In his 90s, Rameses II was one of the oldest pharaohs in Egyptian history, if not the oldest and by year 40 of his reign, Merenptah had been promoted to Overseer of the Army, and Merenptah was officially proclaimed heir and crown prince as Rameses II celebrated his eightieth birthday.  After becoming heir, Merenptah took on new responsibilities in administration, mainly becoming prince regent for his elderly and perhaps senile father for the last twelve years of the king’s life. 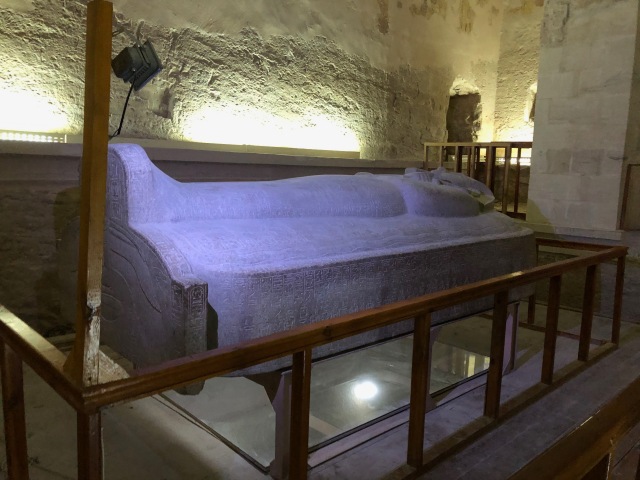 While in the tomb I was approached by one of the culture vultures who walked me around parts of the tomb and then had me pose in front of the figure of female, who I would assume had some relation to Merenptah, perhaps one of his queens?  In the end I gave him 50 EGP ($3.30) and considered myself lucky to get out of there so little out of pocket. 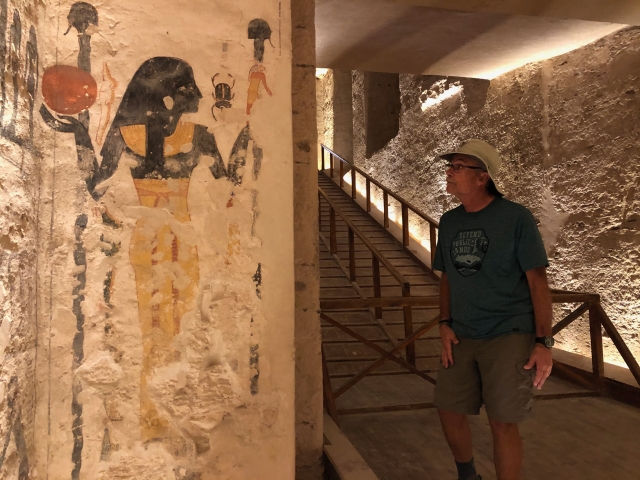 On my way to the last tomb of the visit, I encountered Joanna, Kim and a bleeding Marty, who had his own encounter with a vulture who had encouraged him to climb underneath one of the stone objects inside the tomb.  I’m not sure if the vulture gave him a discount on the tip, but we cleaned Marty up and went on our ways. And so, I entered the tomb of Rameses VI, the fifth pharaoh of the Twentieth Dynasty who reigned for about eight years in the mid-to-late 12th century BC (experts can’t agree on the exact dates).  The son of Rameses III he was succeeded by his son, Rameses VII. 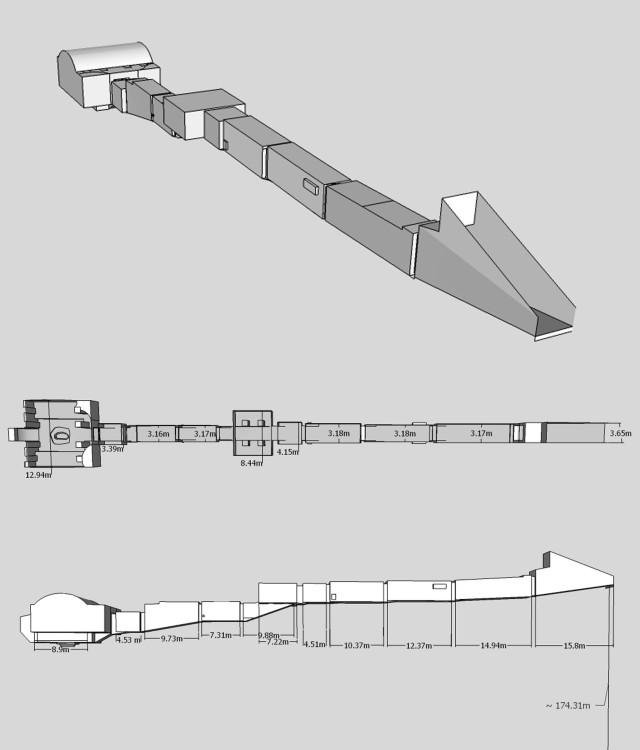 In the first two years after his coronation, Rameses VI stopped frequent raids by Libyan or Egyptian marauders in Upper Egypt.  He usurped KV9, a tomb in the Valley of the Kings planned by and for Rameses V, and had it enlarged and redecorated for himself.  The craftsmen’s huts near the entrance of KV9 covered up the entrance to Tutankhamen’s tomb, saving it from a wave of tomb robberies that occurred within 20 years of Rameses VI’s death. 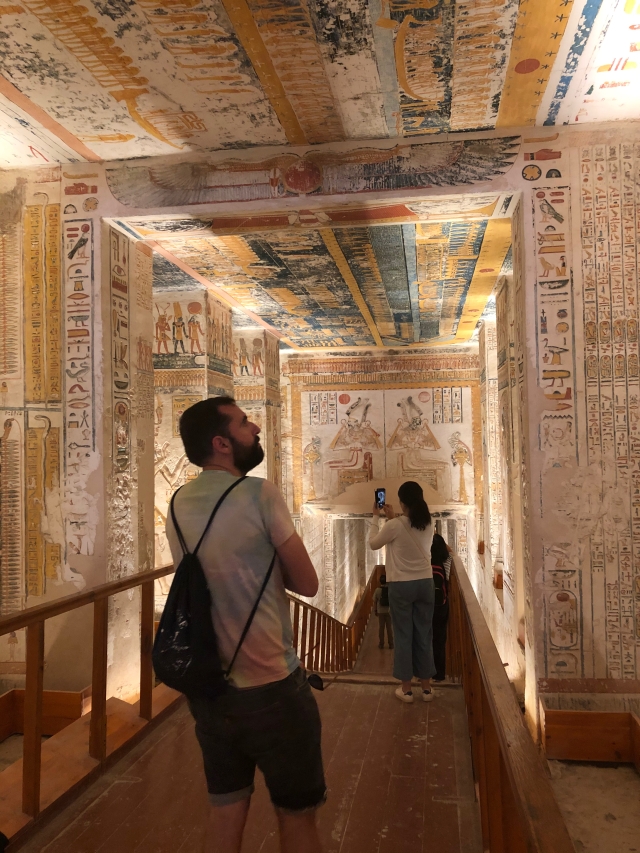 Long Passage in Ramses VI With Roberto and Alice

As with the other tombs, this one was extensively decorated and as you enter, on both sides are images of Rameses VI before Ra-Harakhti (believed to rule in all parts of the created world: the sky, the Earth, and the underworld) and Osiris (Lord of the Underworld).  The walls are decorated with scenes from the Book of Gates and the Book of Caverns.  The corridor ends in a hall that is decorated with an intricate astronomical ceiling and continuing on Book of Gates and the Book of Caverns scenes continue on the left and right walls, respectively. 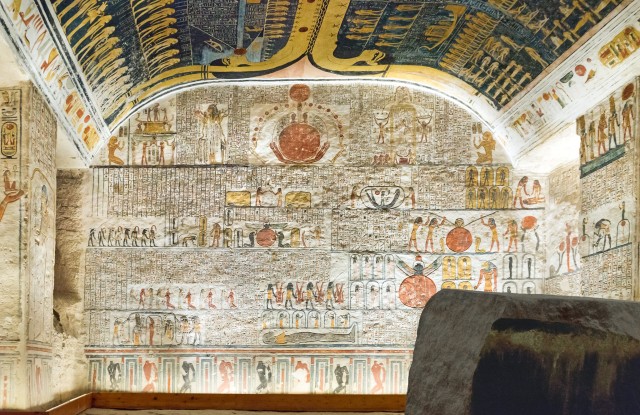 In the descent to the second corridor the decorations show scenes from the Book of the Imi-Duat (Realm of the Dead or Dreams) and the ceiling depicts the barks of Ra and the Books of the Day and Night.  The last hall contains scenes from the Book of the Dead and the Book of Aker (Earth).  I walked back out to the surface dazed from all that I had seen, realizing that to get more from the experience it would be best to view each tomb with a guide.  Unfortunately, this is not allowed as it would slow down access for the crowds that come later in the day. 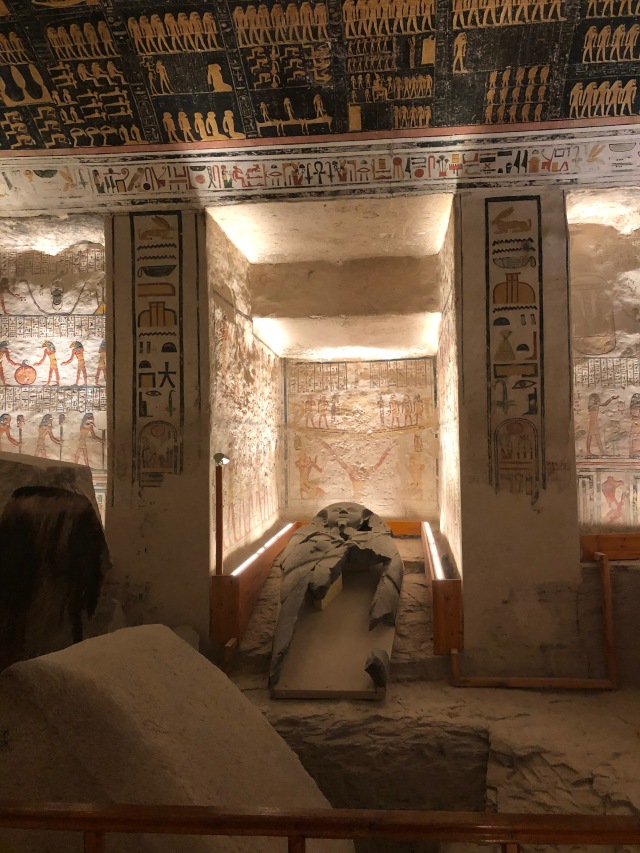 Finished, I made my way to the café area for a coffee and some time to reflect, then chatted with Mahmoud until the others joined us.  We all seemed to be abuzz about the Valley and tombs, excited even after all of the other sights we’d seen so far.  Often, we are asked what our favorite place was after we’ve completed a trip, what city, monument, or iconic spot most appealed to us.  With so many highlights on this one it’s hard to rank them, but the Valley may just come out on top. Joanna, Marty, Kim, Alice and Carmel In Between Tombs

Book of the Earth: https://en.wikipedia.org/wiki/Book_of_the_Earth