We left the Valley of the Kings for our next stop, the mortuary temple complex of Hatshepsut (also Hatchepsut) which was located about three miles away.  At the beginning of the tour Mahmoud had advised us to pronounce the name as Hat-Cheap-Suit, certainly an easy way to remember.  The fifth pharaoh of the Eighteenth Dynasty of Egypt, she was the second historically confirmed female pharaoh, the first being Sobekneferu. 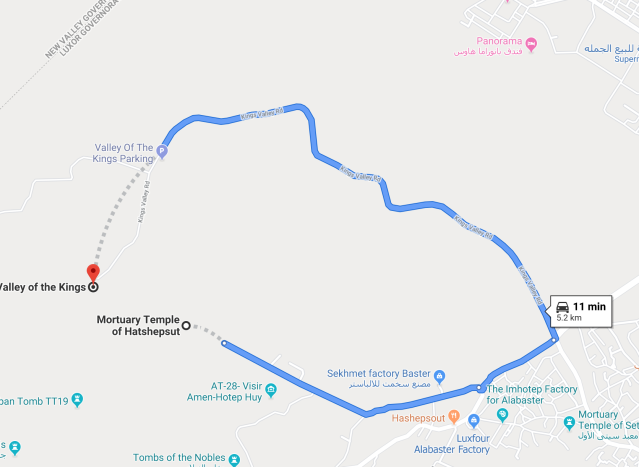 Valley of the Kings to Hatshepsut’s Mortuary Temple 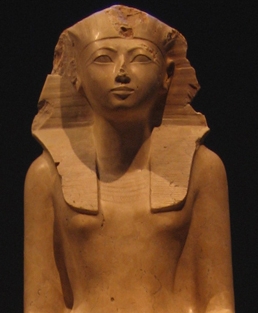 When her husband Thutmose II died in 1479 B.C. and her stepson was appointed heir, Hatshepsut dutifully took on the added responsibility of regent to the young Thutmose III.  As the years passed, however, she acted less like a temporary overseer and more like Egypt’s rightful ruler, referring to herself as “Lady of the Two Lands.”  With Thutmose III nearing maturity, Hatshepsut declared herself pharaoh, adopting the emblems and titles associated with the title. 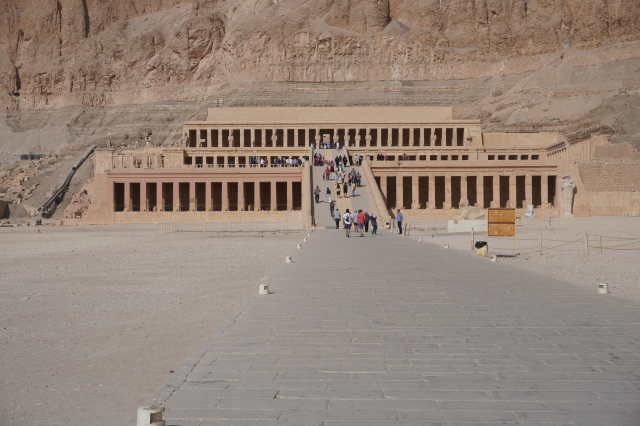 Path to the Complex

During her reign, Hatshepsut re-established the trade networks that had been disrupted during the Second Intermediate Period (between the end of the Middle Kingdom, 2050 BC to around 1710 BC, and the start of the New Kingdom, 16th century BC to 11th century BC), thereby building the wealth of the Eighteenth Dynasty.  She initiated a trading expedition to Punt (likely in the northern Horn of Africa) that brought back many goods, notably frankincense and thirty-one live myrrh trees, the roots of which were carefully kept in baskets for the duration of the voyage.  This was the first recorded attempt to transplant foreign trees.  It is reported that Hatshepsut had these trees planted in the courts of her mortuary temple complex. 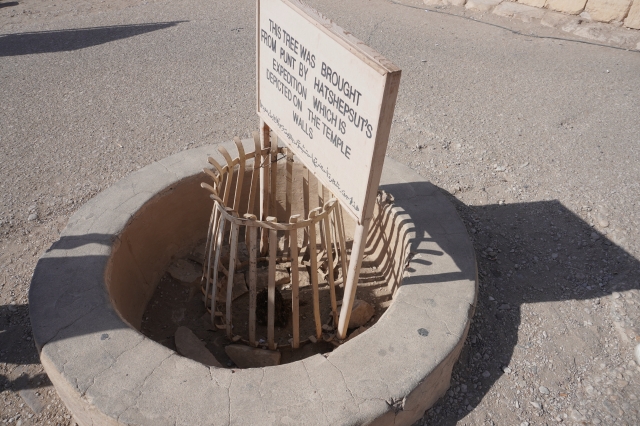 One of theThirty-One Myrrh Trees

She was also one of the most prolific builders in ancient Egypt, commissioning hundreds of construction projects throughout both Upper Egypt and Lower Egypt.  Generating buildings that were grander and more numerous than those of any of her Middle Kingdom predecessors’, later pharaohs would attempt to claim some of her projects as theirs. 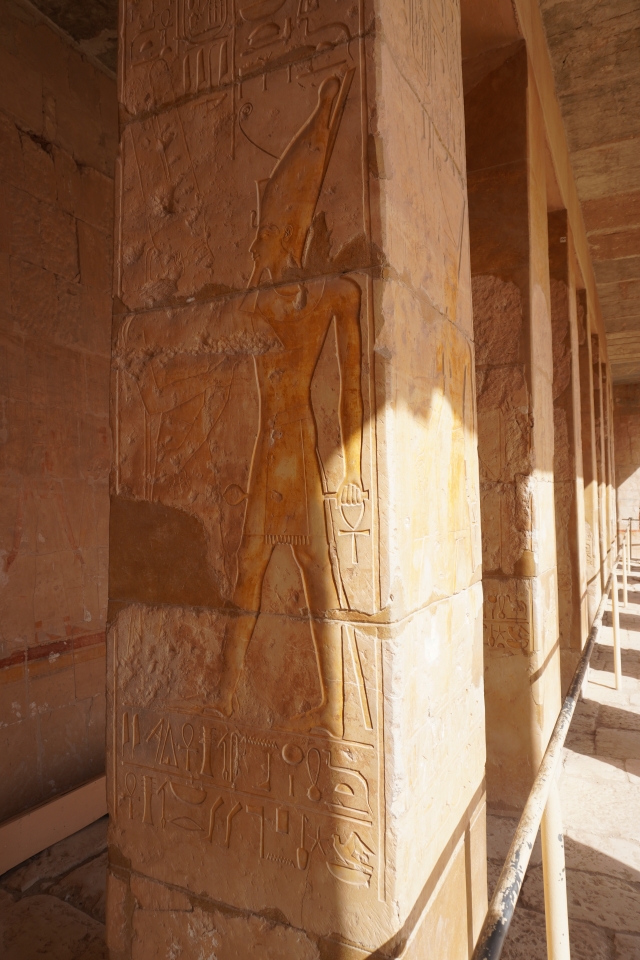 In addition, so much statuary was produced that almost every major museum with Ancient Egyptian artifacts in the world has Hatshepsut statuary among their collections; for instance, the Hatshepsut Room in New York City’s Metropolitan Museum of Art is dedicated solely to some of these pieces. 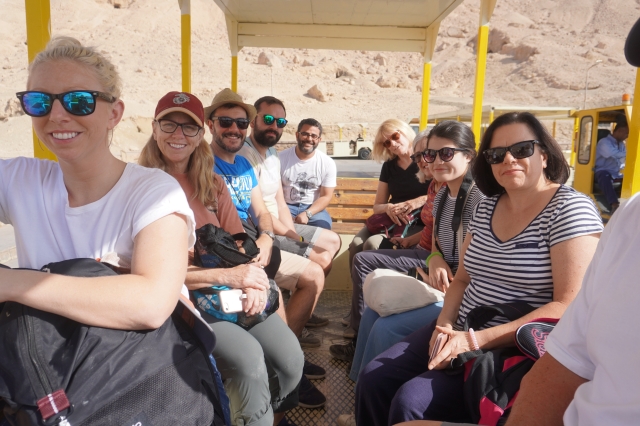 We were dropped off at the temple where a theme park like shuttle took us to the walkway that led up to the site.  Located beneath the cliffs at Deir el-Bahari, it is said to have taken 15 years to complete the building between the 7th and 22nd years of Hatshepsut’s reign.  After the splendor of the tombs in the Valley of the Kings, this complex seemed to pale in comparison, being more impressive from a distance. 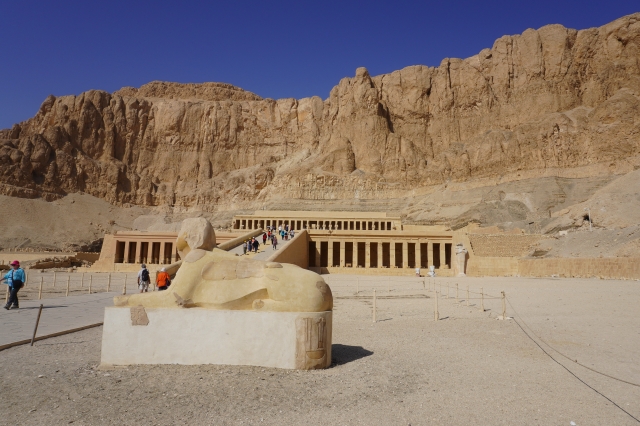 Remnant of the Sphinx Avenue

The relief sculpture within Hatshepsut’s temple recites the tale of the divine birth of a female pharaoh, the first of its kind.  The text and pictorial cycle also tell of the aforementioned expedition to the Land of Punt.  While the statues and ornamentation have since been stolen or destroyed, the temple once was home to two statues of Osiris, a sphinx avenue as well as many sculptures of the Queen in different attitudes – standing, sitting, or kneeling.  Many of these portraits were destroyed at the order of her stepson Thutmose III after her death. 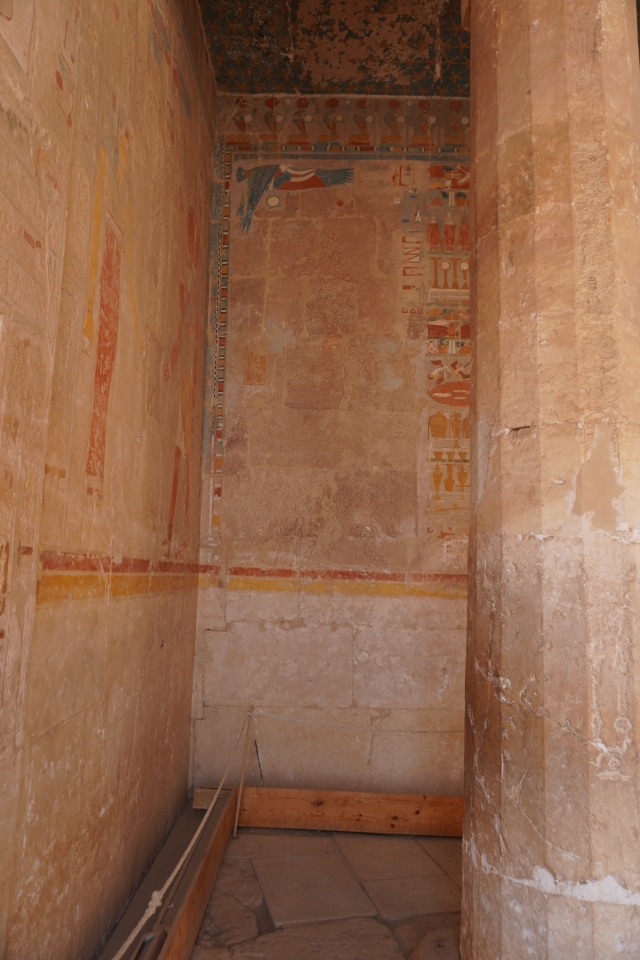 After regrouping at the Complex’s café, we hopped in the van and drove to Bazar Badr, an Alabaster emporium where we witnessed a brief demonstration on how the rock is prepared and then worked to create items of interest.  It appeared that most of the work was done in the courtyard outside the showroom; handmade Alabaster products are more valuable as they can be made thinner and more translucent.  So this could have been the production facility and we were counting on Mahmoud to have steered us right. 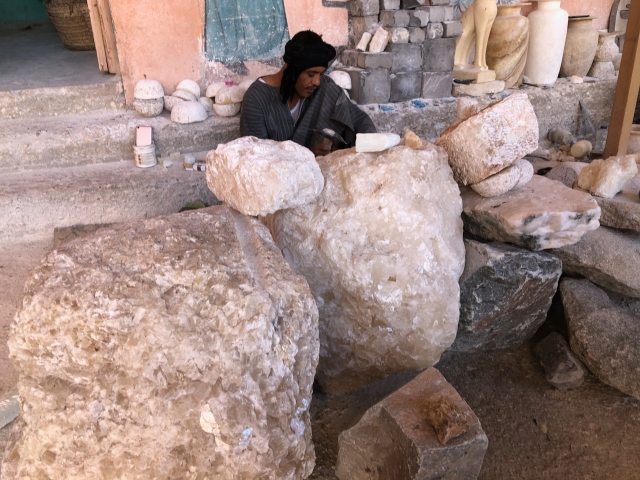 Raw Stones at the Alabaster Shop

None the less, it was an interesting diversion; the use of alabaster in Egypt dates well back into the Pharaonic period of Egyptian history, and this is very evident when one visits the temples, tombs and museums in Egypt.  In ancient times is was used for many purposes, including household items, ritual objects, and for a number of different funerary purposes such as sarcophaguses and canopic equipment. 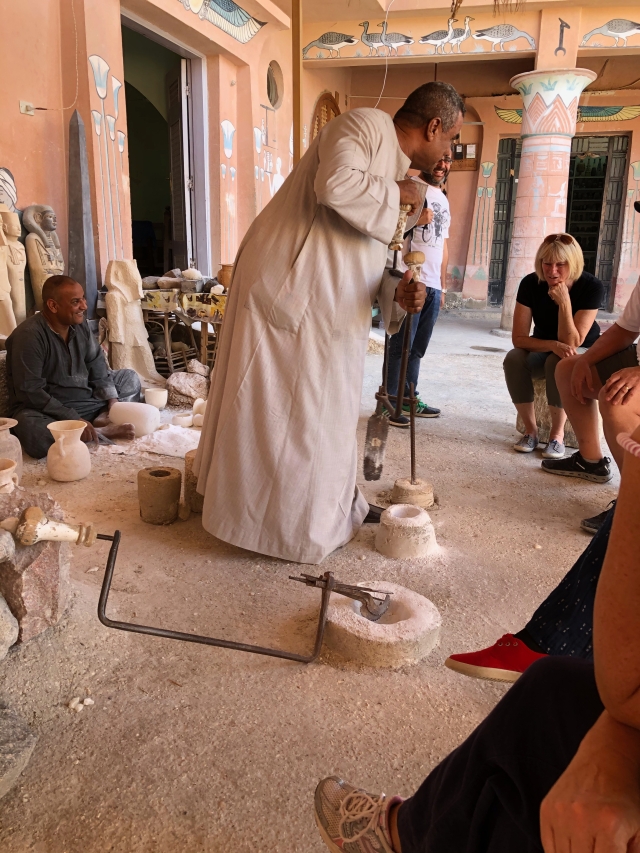 Alabaster is a fine-grained, translucent variety of gypsum.  It is pure white or streaked with reddish brown and forms by the evaporation of bedded deposits that are caused mainly from evaporating seawater.  It is a soft material and can be easily broken, soiled, and weathered. 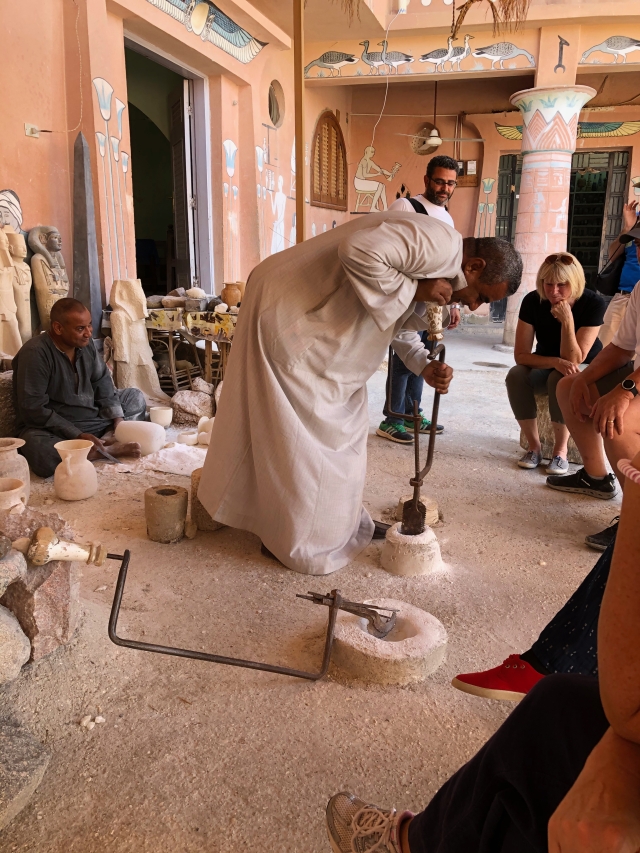 In Egypt alabaster is found in two places, a few miles behind the Valley of the Kings in Luxor and the Malawi area.  Some Alabaster factories in Luxor and Aswan prefer to get their Alabaster material from Malawi because they can use trucks for transportation, but the road to the area behind the Valley of the Kings is not good enough for trucks to transport the stone, so they still use horses or donkey drawn carts. 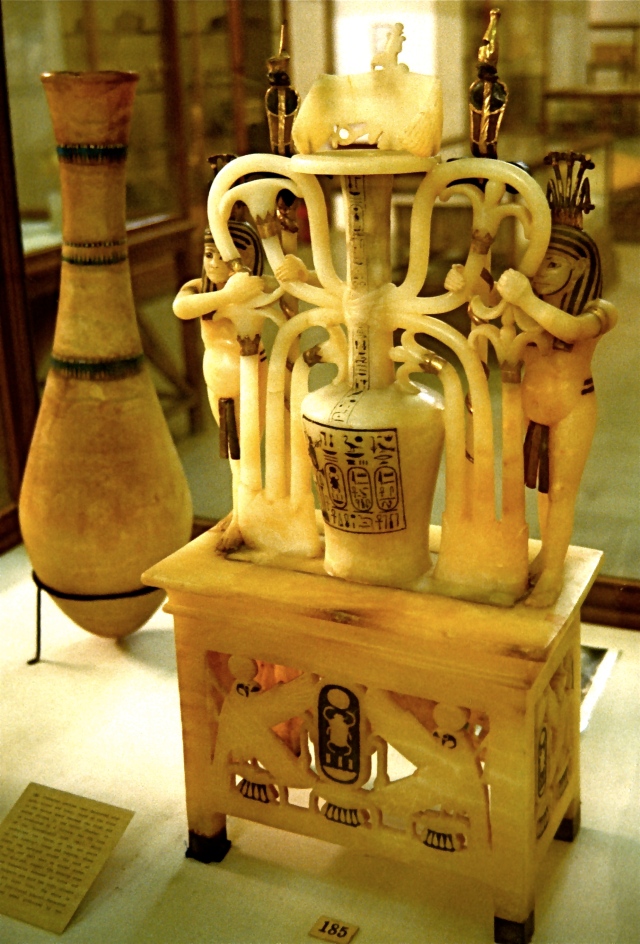 A calcite alabaster perfume jar from the tomb of Tutankhamen, d. 1323 BC (By Frank Rytell)

On every trip we try to limit the number of souvenirs we acquire, preferring that they evoke a special memory, serve a purpose, or follow a theme.  Those who know Joanna are aware of her love of horses and over time we’ve assembled a nice collection of them, each reminding us of a special time and place.  So, what better piece of Alabaster to take home than a small horse, portable and not taking up too much space in our one rolling suitcase apiece. 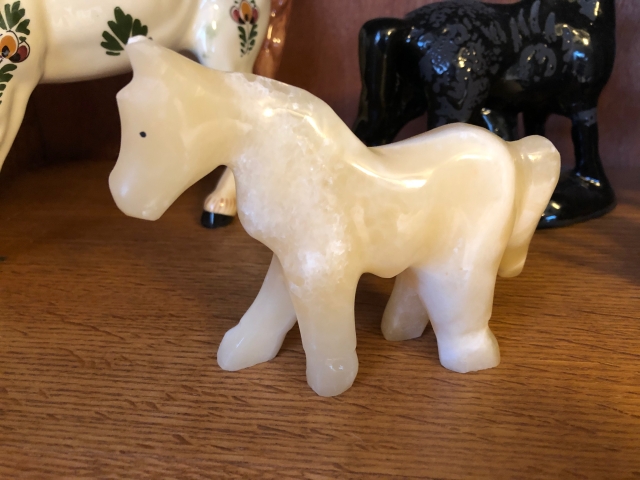 By now we were all pretty hungry and ready for our second meal in a home, this time an Egyptian feast at the residence of a local Intrepid employee.  It would be interesting to compare this one with the Nubian dinner we’d had in Aswan.  Bring on the food! 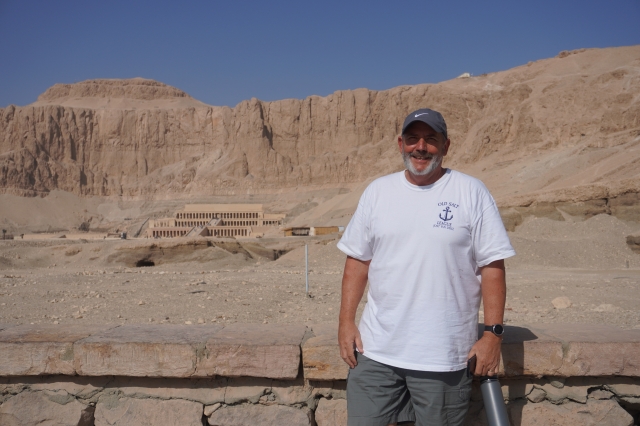 Marty at the Mortuary Temple