We finished up with our breakfast and checked out of the hotel, our stay of four nights running us 7,515 Pesos ($388.40) in total with 6,873 pesos ($357) for lodging and 642 pesos($33) for meals/drinks, less than $100 a day for a nice room and a number of breakfasts.  One of the friendly hotel staff members arranged for a taxi and soon we found ourselves on the way to the TAPO bus terminal (Mexico City has four terminals serving different parts of the country). 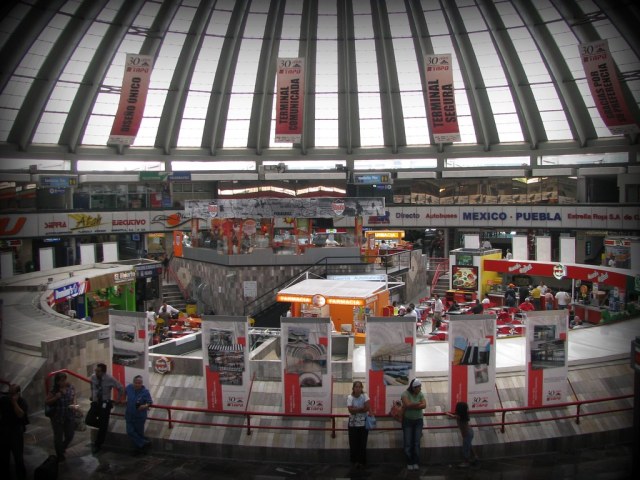 With a little time to spare, we picked up a few things to take with us and at the appropriate time lined up to board the bus, first having dropped off our bags to be loaded into the storage compartments.  When we got to the portable ticket counter who to our surprise should we encounter but our old nemesis from Greece, yes, the infamous Jenny Manetta.

When we’d purchased the tickets a few days before our ticket agent, and his supervisor, did not have a big command of English, no complaints from us as our Spanish isn’t so hot either.  I’d wanted to take the bus we’d queued up for, but in the exchange and to do us a favor, the agent had booked us on an earlier bus, saving us a considerable amount of money.

But did we check our tickets ahead of time to confirm the actual bus and time?  Nope as we’d figured old Jenny was but a distant memory.  The agent at the kiosk let us know that our bus had just departed and that we’d need to re-book the ticket.  Inside, we secured seats on a bus leaving about an hour later for an additional 339 Pesos ($18) bringing the total cost of the six-hour journey to 1,169 Pesos ($78), still a relative bargain for a day’s ride on a modern air-conditioned conveyance with Wi-Fi and charging outlets. 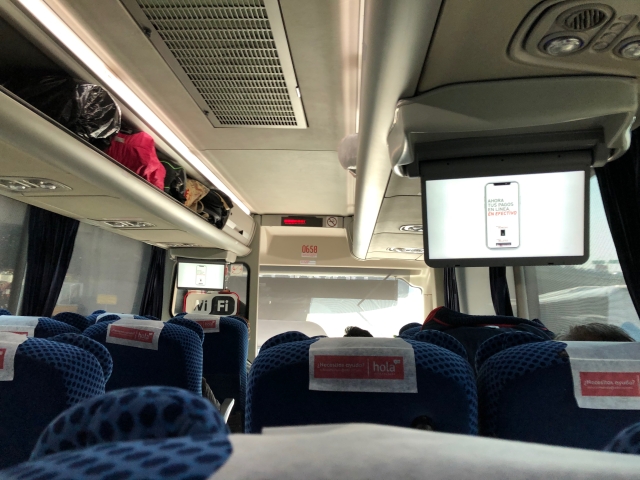 At our brief stop in Puebla we purchased a nice apple turnover and then enjoyed the final push into Oaxaca, delighted with the views outside of our windows as climbed up and over the mountains that surround the city.  Because of our late start we arrived much later in the day than we had originally anticipated and as a result, we had our second encounter with Jenny Manetta, this time with a taxi driver.

Unlike the taxi set up at other bus stations, here you just went outside and took the first one in line, our bad luck as we came to conclude that it was our driver’s first day on the job in a town he had just moved to.  We stated the name of our hotel, Azucenas (White or Madonna Lily) and then showed him a printout with the address and off we went.

We began to think we were in trouble when what should have been a straightforward ten-minute ride began to drag on as we made turn after turn on the crowded streets of town.  Eventually we stopped in front of a couple of hotels and figured we were at the Azucenas.  How wrong we were.  As the taxi sped away, we looked at the lodging in front of us and correctly concluded that neither was our hotel.

What Should Have Been the Taxi to Azucenas

Fortunately, our phones worked, and we called up a map application and soon started walking in what we hoped was the direction of the hotel.  After a few blocks we started ascending some steep stairs, made more difficult hauling our bulky wheeled luggage up them but finally got to the top and noticed a local police outpost.  We approached the officers and showed them the address and they conversed amongst themselves, shrugged their shoulders a couple of times and then pointed in the general direction of another short uphill stretch of pavement.

Still confused, off we went and fortunately for us, a couple of blocks later we came upon the hotel and with a great deal of relief, opened the front door and entered the lobby.  The young man who checked us in spoke very good English and as we would come to find out over the course of our stay, he was one of small group of regular staff who we would regularly interact with and come to like very much. Bed and Window in Our Room

We dropped our things in our room which was on the small side, but still large enough for our needs and charming, the hotel being a nicely restored century old house.  We walked upstairs to the roof to check out the breakfast area and its view of the city below.  We were hungry and yet not enough to muster up the energy to head out looking for food, so contented ourselves with the view, a few cold beers from the fridge (you were on the honor system) and some food we brought with us.  It was a good way to end what had been one of those days that started out sideways and could have gone wrong in a number of ways, and yet were where we’d intended to be at the beginning and sometimes it doesn’t get better than that.