Breakfast the next morning would become a reassuring and filling habit, a small buffet of fruit, muffins, bread, cereal, yoghurt and various things to drink.  You’d fill your plate and sit at one of the tables on the rooftop, the sounds of a waking city bubbling up from the street below.  And at 60 Pesos apiece ($3) it was a bargain like the many we would find on the trip. 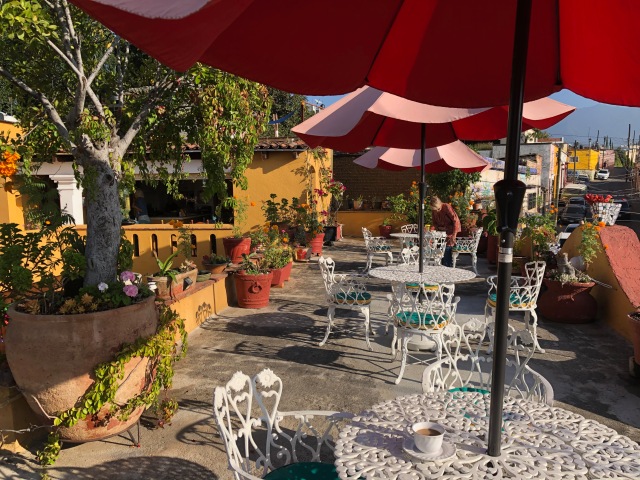 Tables on the Roof

After the first morning, because I tend to rise earlier than Joanna, I’d put on clothes and go upstairs to make a cup of instant coffee (I use Starbucks Via) as breakfast doesn’t start until 7am.  Bringing it bring back down to the inner courtyard I would enjoy it while reading on the Kindle, often the L.A. Times before moving on to whatever book I was into at the time.

One thing we never quite got used to is the level of noise prevalent on the streets.  Mexican’s appeared to have a very different relationship to noise than we do in the U.S. or than what we’ve experienced in Europe.  The garbage trucks are really loud, and every vendor and service seemed to have their signature noise to alert you of their presence.  The gas truck, the knife sharpener, the popsicle man, the water man, the list goes on.

We set aside the first day to get out and explore town, heading straight down Mariano Matamoros to one of a couple of the streets that would take us to the Zocalo, the beating heart of Oaxaca.  We would walk this route, or some variant of it, every day and before leaving town would feel right at home in the neighborhood. 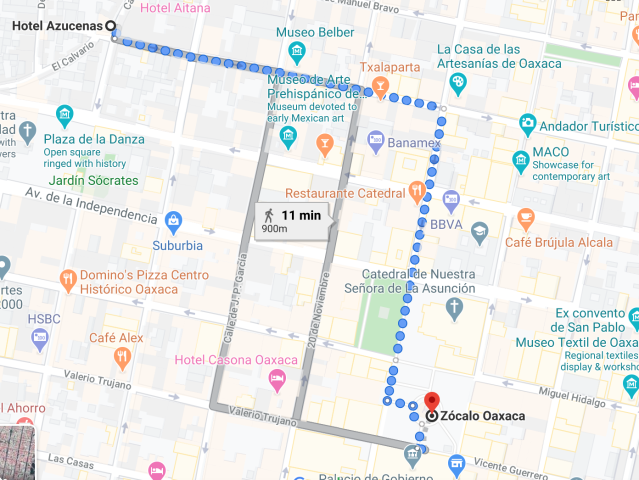 Walk to the Zocalo

The buildings in this part of town are painted in vibrant colors and within a block of the Zocalo the streets are closed off to vehicular traffic.  We hit the edge of the square and walked its perimeter, stopping first at the Tempo de la Compania de Jesus, constructed in 1579 by Jesuits and declared a historical monument in 1933. 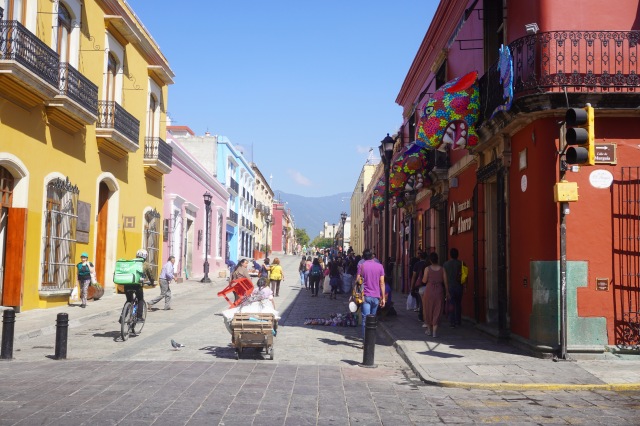 We spent a short time there before heading back out onto the street where to satisfy our curiosity, we bought a small bag of fried grasshoppers from a cart and popped a couple in our mouths.  They were crunchy and without much taste except for a spicy seasoning that I could only take a small amount of.  We would end up bringing most of them home at the end of the trip and the bag they were transported in smelled like them for quite some time afterwards.

Joanna and Her Grasshoppers

Walking to another edge of the Zocalo we entered the Cathedral of Our Lady of the Assumption (Oaxaca Cathedral) the seat of the Roman Catholic Archdiocese of Antequera in Oaxaca.

Its construction began in 1535 and it was consecrated on July 12, 1733.  As a mass was being conducted, we couldn’t walk around to view the interior, so we exited and spent some time sitting on a wall to listen to a band concert in the square. 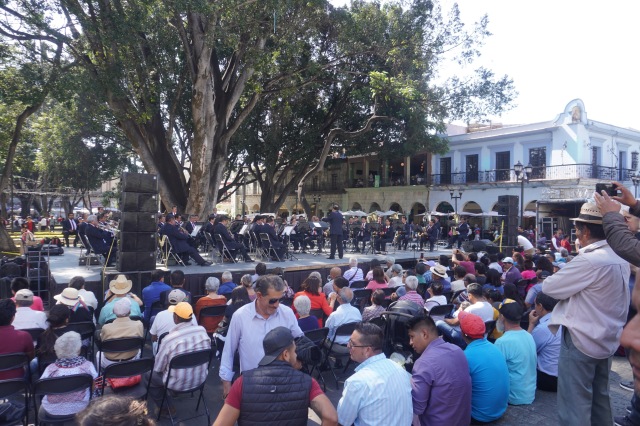 Band Concert in the Zocalo

The concert over, we walked around a bit killing time before returning to the Cathedral. While doing so we noticed a nicely maintained VW Beetle and decided that from that point on we’d take a picture of each one we saw.  There would be many.

The First VW Beetle We Sighted

The empty church, now quiet, resonated with the sound of feet walking on the stone floors instead of the hymns we’d heard earlier.  As much time as we spend in cathedrals, we realized that when crowded it doesn’t make for a good picture taking opportunity, but it does reinforce why they exist.

We returned to Azucenas and spent the balance of the afternoon enjoying a cold beer or two and catching up on the blog and other activities enhanced by a 5% lager.  Around dinner time, we consulted a list of local restaurants kept at the front desk and decided to try out Zandunga, recommended by a couple of the sources we regularly use. 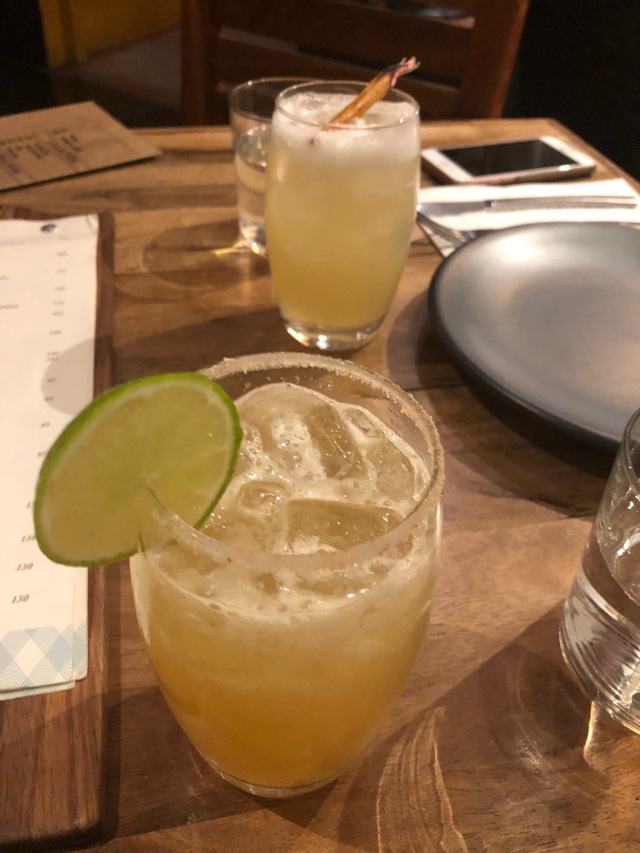 It is a lovely space, not to wide but deep with high ceilings that give it a spacious feel.  Seated we started with two Zandunga Margarita’s (with mezcal) and at the waiter’s suggestion, a local appetizer (Ixtepec) of a mild chopped fish that one spooned up on tortilla strips and garnished with two different kinds of salsa.

Wanting to try as much as possible we followed this with another appetizer, four pieces of Garnacha, comprised of small Fried corn tortillas, with beef, onion and tomato sauce.  Filling up after these two hearty starters, we began to regret having ordered the rest of the meal, that being a Shrimp Soup (Molito de Camarin) and a Tamal de Mole Negro for Joanna.

Being in Oaxaca, known for its Mole’s, I went for the Mole Negro, a nicely cooked chicken breast in the dark mole sauce with a corn tortilla and side of rice.  Each item we tasted was delicious, although I would come to prefer the lighter moles, the intensity of the negro version off-putting after a few bites.  We’d have more opportunities to try different types as the trip proceeded, as everyone here has their favorite recipe. 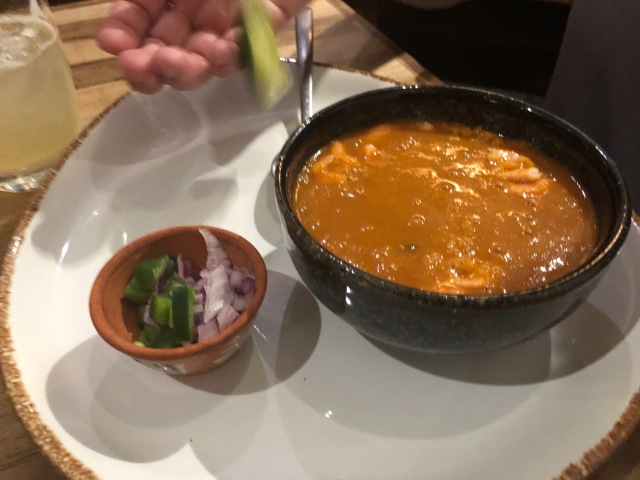 We did the best we could trying to finish our entrees having eaten way too much at the start of the meal, a real shame as they were so good.  We finished up and settled the tab, which came to 918 Pesos ($47), less than $50 for a full meal with two cocktails.  The walk back to the hotel helped to begin the digestive process and left us set for another day in Oaxaca.  We were ready to get going. 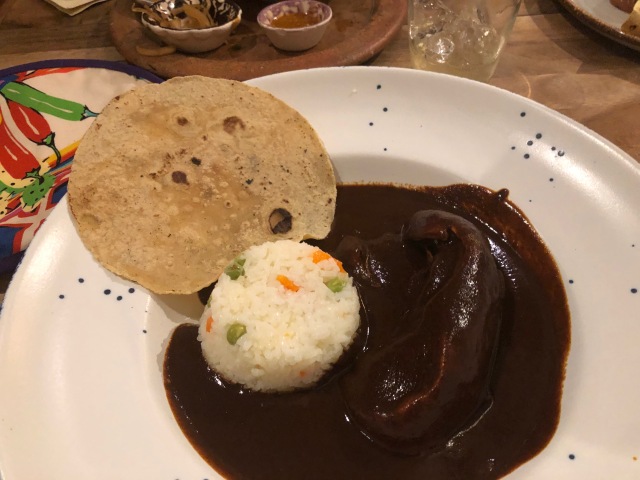