After another filling breakfast, we plotted out our plan for the day, the big-ticket item to be a visit to Monte Alban to see one of the top five pyramid complexes in Mexico.  We first considered taking a guided tour of the site, but after doing some research determined that it would be feasible to do it on our own, making for a less expensive outing.  Also, most of the tours were a day long and included multiple stops, a few of which didn’t interest us.

Although one could get to the site by local bus, we decided to take the easy out and grab a taxi for the five-mile ride there for 250 Pesos ($13.67).  Arriving, we walked to the entrance and ran into a group engaging the services of a local guide and we joined them, paying him 200 Pesos ($11) for the both of us on top of the entrance fee of 75 Pesos ($4.10) apiece.

For the first 20 minutes our guide gave us some background and described the uses of some of the ruins on the periphery of the main complex.  And then we walked to a set of stairs that took us down to the broad plain that is surrounded by the pyramids of Monte Alban.  A large pre-Columbian archaeological site, it sits on a low mountainous range rising above the plain in the central section of the Valley of Oaxaca.

The partially excavated civic-ceremonial center of the site is situated atop an artificially leveled ridge, which at 6,400 ft above sea level rises some 1,300 ft from the valley floor, in an easily defensible location.  In addition to the monumental core, the site is characterized by several hundred artificial terraces, and a dozen clusters of mounded architecture covering the entire ridge line and surrounding flanks.

Monte Alban as You Enter

Besides being one of the earliest cities of Mesoamerica, Monte Albán’s importance stems from its role as the pre-eminent Zapotec socio-political and economic center for close to a thousand years.  Founded around 500 BC, it had become the capital of a large-scale expansionist society that dominated much of the Oaxacan highlands and interacted with other Mesoamerican regional states such as Teotihuacan to the north.

The city had lost its political pre-eminence by the end of the Late Classic period (AD 500-750) and soon thereafter was largely abandoned.  Small-scale reoccupation, opportunistic reutilization of earlier structures and tombs, and ritual visitations marked the archaeological history of the site into the Colonial period.

J and J at Monte Alban

The monumental center of Monte Albán is the Main Plaza, which measures approximately 98 feet by 660 feet. The site’s main civic-ceremonial and elite-residential structures are located around it or in its immediate vicinity, and most of these have been explored and restored.  To the north and south the Main Plaza is delimited by large platforms accessible from the plaza via monumental staircases.

On its eastern and western sides, the plaza is similarly bounded by a number of smaller platform mounds on which stood temples and elite residences, as well as one of two ball courts known to have existed at the site.  A north-south spine of mounds occupies the center of the plaza and similarly served as platforms for ceremonial structures. 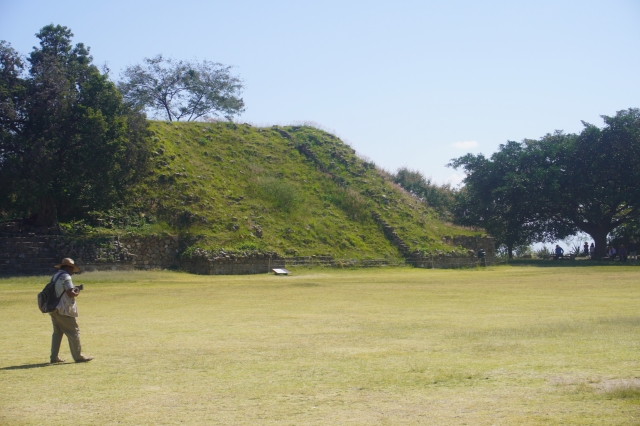 One characteristic of Monte Albán is the large number of carved stone monuments one encounters throughout the plaza.  The earliest examples are the so-called Danzantes (dancers), found mostly in the vicinity of Building L and which represent naked men in contorted and twisted poses, some of them genitally mutilated.  The figures are said to represent sacrificial victims, which explains the morbid characteristics of the figures.  There is some indication that the Zapotecs had writing and calendrical notation.

The Dancers (By User: Gengiskanhg – Photograph taken by me)

Midway through the tour our guide introduced us to a local craftsman who made small figurines, one of which we purchased for a nominal sum, a ball player that can be rotated into a number of seated positions.  Later we would climb to the top of the South Platform for its commanding view of the site and the surrounding countryside.

Finishing our time at the site, we decided to try taking the bus back to town, locating the bus stop and then climbing aboard after paying the fare, a pittance compared to our taxi ride out.  The downside was that we were dropped off in a section of town not familiar to us, making us glad we hadn’t tried to find the stop for the journey out to Monte Alban.

Pano View from the Top

Walking back, we stopped near the Zocalo for a refreshing Choco Mio beverage at Mayor Domo, a local chain selling this refreshing chocolate drink and various flavors of mole. Out on the plaza a demonstration was in progress, and not having a great command of Spanish we couldn’t quite tell what it was about.  Prior to the trip I’d read Paul Theroux’s Plain of Snakes, a recounting of a journey he took recently to drive the entire length of the US–Mexico border, then down to Mexico City, Puebla, Chiapas and Oaxaca. 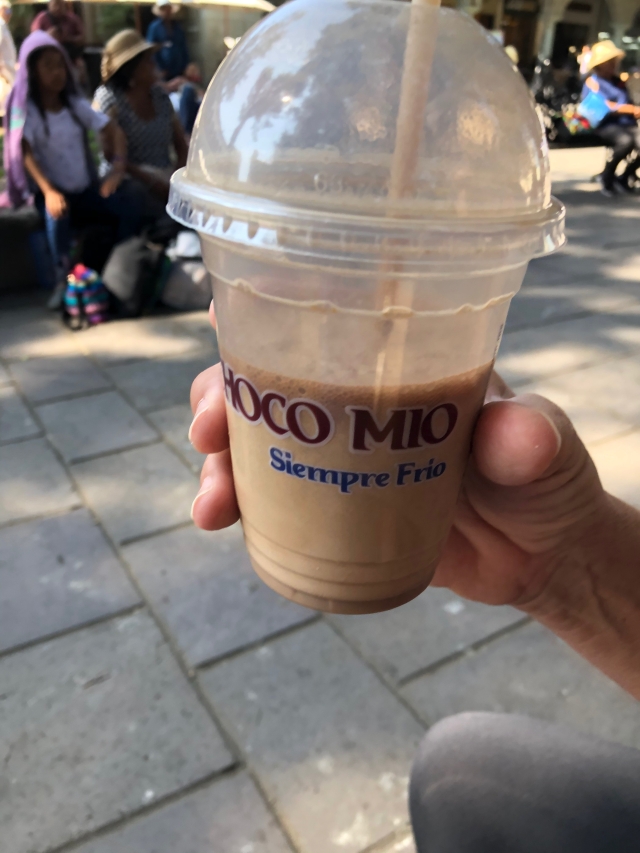 It helped me understand a bit more about the many people that populate Mexico and Oaxaca in particular.  Here is a quote about the town:

“In extolling Oaxaca in the travel pages of a newspaper or magazine, the visiting writer on a weekend junket nearly always romanticized the experience and idealized the state, ignoring the fact that it is one of the poorest areas in the country, and that the city’s traffic is maddening and often at a standstill because of political protest blockades or the sheer volume of cars”.

With some more exploring to do that afternoon we took off and kept walking, ducking in and out of shops and finally stopping for a snack at Café Yuviaga. 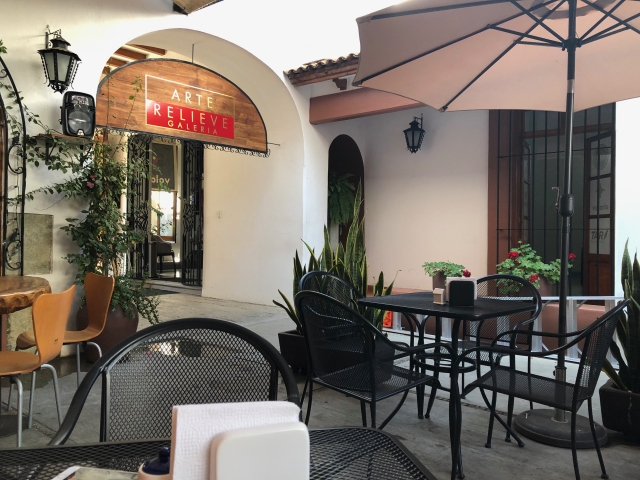 Quiet Retreat in a Busy City

We ordered a latte and sandwich for 100 Pesos ($5.47), sitting in a peaceful shaded courtyard which made the busy streets nearby seem miles away.  We devoured the food once it arrived, hungry after a busy morning and plotted out the rest of the day.  Not a bad way to spend your time if you have the time. 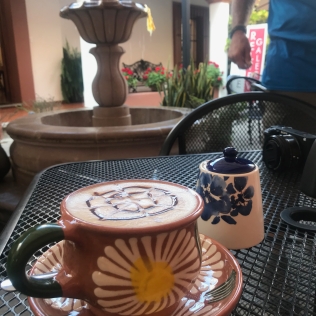 Tasty Sandwich and Side