After our tasty snack, we walked up to the Templo de Santo Domingo, a former Dominican monastery (we’d visit it later in our stay) stopping at a number of shops to check out the merchandise.

From there we walked through a small street market, one of many around the city, a common fixture in Mexico with stands selling food, tourist goods, and whatever strikes your imagination.

On the way back to the hotel, we stopped to admire a piece of wall art outside of the Zapote Negro Art Gallery, one of many found in a city full of provocative graphic art, an angel’s wings where a nearby angelic presence poised for the camera.

We spent the rest of the afternoon resting at the hotel, again finding the central courtyard to be just the right spot to sip a beer and read. 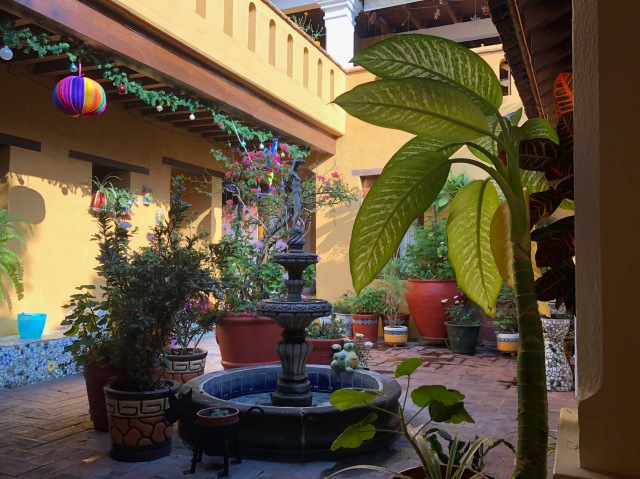 Fountain in the Courtyard

Our room was comfortable as well, with a spacious shower and separate sink area, complete with a rock imbedded in the wall. Sink and Rock in the Wall Later for dinner, after doing some sleuthing on the internet, we found Oaxaca’s only brew pub not far away and set off for a rendezvous with destiny.  Entering Santísima Flor de Lúpulo (the blessed hop flower) we encountered a small bar area with an adjoining café.  We sat at a high-top table at the back of the room facing the bar and ordered a pale ale and a flight of their three beers on draft.

We found the beer to be good but not stellar, refreshing in its own way but not close those we can get in the States.  But we were in Oaxaca and given the lack of availability of craft beer in the other countries we’ve traveled in, it was refreshing just to find it here. 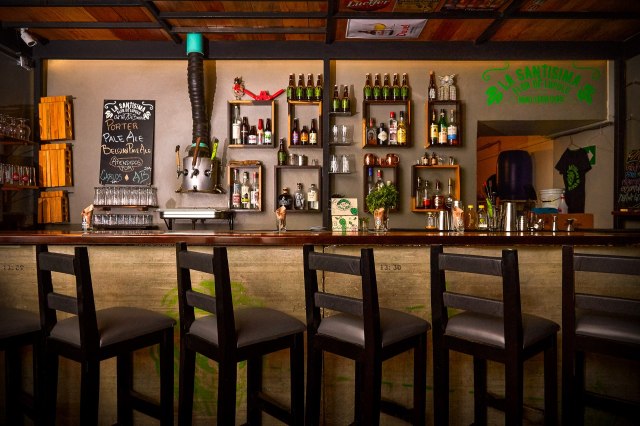 Joanna had the menu special that day, the Burg and Flight special, a real deal, while I had one of the best chicken sandwiches ever, toasted with a creamy chicken filling, it was heaven in each bite.  We engaged the bartender in conversation and eventually started experimenting with various types of Mezcal as we attempted to expand our knowledge of this tequila variant.

Half of that Good Burger

Like many of my generation, I came of age drinking Jose Cuervo Gold, although drinking might be a less than accurate description of college age individuals standing in a circle and passing around a bottle with a lime and salt and taking shots until it was empty, and we were full.  The outcome for many was not always pleasant and nearby bushes were often the unwitting recipients of partially digested meals consumed earlier in the day. Draft Beer and a Mexcal

We finished up having consumed two of their pale ales and Joanna’s flight, two mezcals (a Espadin and a Tobala) , the burger deal and a chicken sandwich for a total of 529 pesos ($27.25) including the tip and walked back to the hotel.  The next day we ran into two other guests at the hotel, an older Canadian couple who once owned property in Oaxaca and now come twice a year or more and stay at Azucenas for a week at a time.  They were chatting with one of the staff members at the desk and we joined in.

They asked about our plans for the day and suggested that we be sure to take in the Ethnobotanical Gardens (containing a large collection of plants native to the region) at the Templo de Santo Domingo.  We had planned to visit there, and this seemed like the time to do it although there was one complication.  The English tours are only given on Tuesday, Thursday and Saturday of each week at 11 am and it being Tuesday, it would be our only chance to visit them as we would be leaving town on Thursday.

View of the Gardens from the Museo

The complication was that it was now about 20 minutes to 11 am; could we make it in time?  We lit out of Azucenas at high rate of speed, or at least as fast as this aging geezer could manage and pulled up in front of Santo Domingo with a few minutes to spare and faced with a choice; our Canadian friends had said the entrance to the garden was on the left corner.  But which left corner?  With only two choices, we of course took the wrong one and ten minutes later after having circled the entire property, found ourselves at the entrance where we were informed it was too late to join the tour.

Rats!  Thus, we walked back around to the front of the complex and entered the cathedral.  As its name implies, the church and monastery were founded by the Dominican Order.  Begun in 1575, they were constructed over a period of 200 years, between the 16th and 18th centuries.  The monastery was active from 1608 to 1857.

Ornate Ceiling in the Church

In the period of the revolutionary wars, the buildings were turned over to military use, and from 1866 to 1902 they served as a barracks.  The church returned to religious use in 1938 and its restoration features a highly decorated interior that includes use of more than 60,000 sheets of 23.5-karat gold leaf. 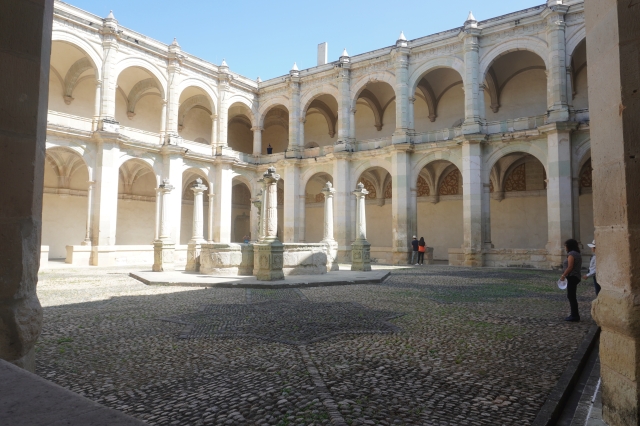 Courtyard of the Museum

The monastery was made available to the Universidad Autónoma Benito Juárez de Oaxaca and in 1972 it became a regional museum, and in 1993 the decision was taken to undertake a full restoration which was completed in 1999.  The rooms that formerly constituted the monastery now house the Cultural Centre of Oaxaca, which was founded with the help of Oaxacan-born artist Francisco Toledo.

Exhibit Room at the Museo

The rich displays here take you through the history and cultures of Oaxaca state up to the present day, emphasizing the continuity between pre-Hispanic and contemporary cultures in areas such as crafts, medicine and food.  The greatest treasure is the Mixtec hoard from Tomb 7 at Monte Albán.  This dates from the 14th century, when Mixtecs reused an old Zapotec tomb there to bury one of their kings and his sacrificed servants, along with a stash of beautifully worked silver, turquoise, coral, jade, amber, pearls, finely carved bone, crystal goblets, a skull covered in turquoise and a lot of gold.

The Face of the Lord of the Underworld from Tomb 7

The museum was gigantic, featuring a confusing floor plan that often found us viewing an exhibit we’d seen earlier in the visit not sure how we’d landed back there again.  Plus, as we had and would continue to encounter, almost all of the explanatory material is in Spanish, making for a less than fulfilling excursion, but again shortening the amount of time one spends inside. 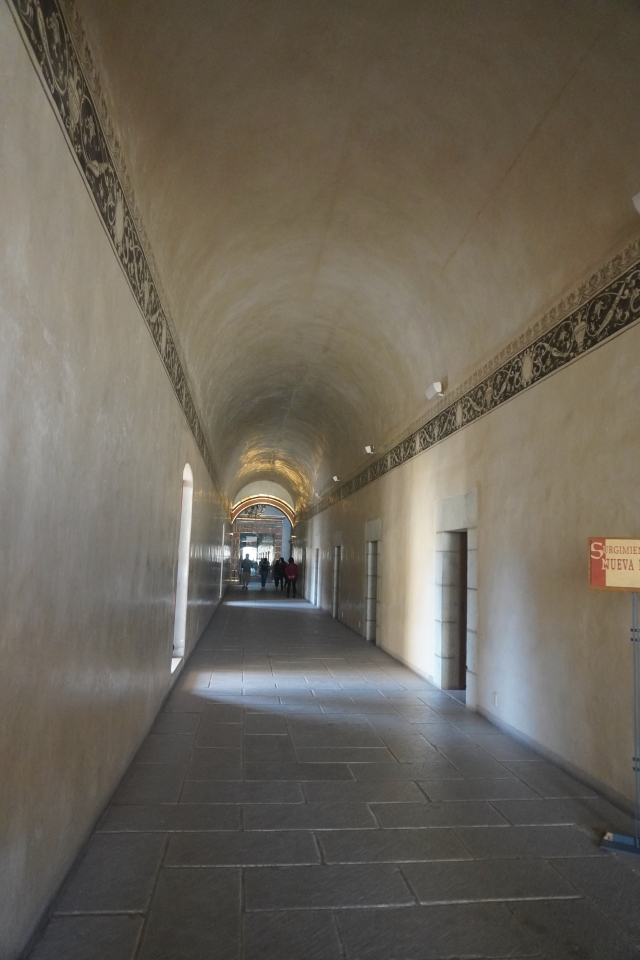 One of the Long Corridors

After doing a complete circuit of the complex (and repeating a few rooms as we stumbled through its confusing layout), we exited to a glorious afternoon and stepped across the street to Café Brujula for a coffee and pastry.  A warm and welcoming environment, it was a place one would hang out at if they lived nearby.  And the view out the front window of the Templo reminded you of the long history associated with the area.  One we’d remember as we continued on with our day. 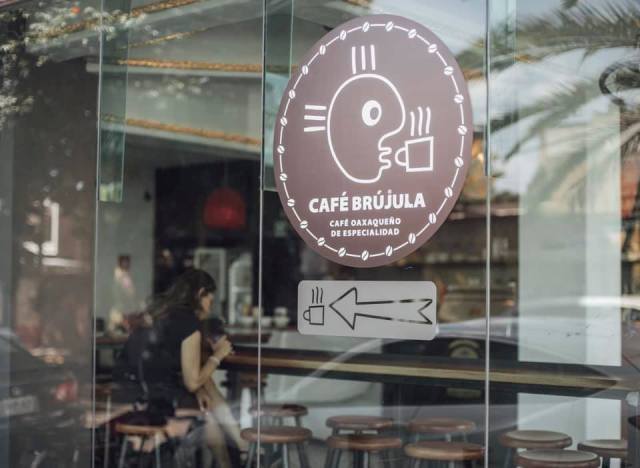